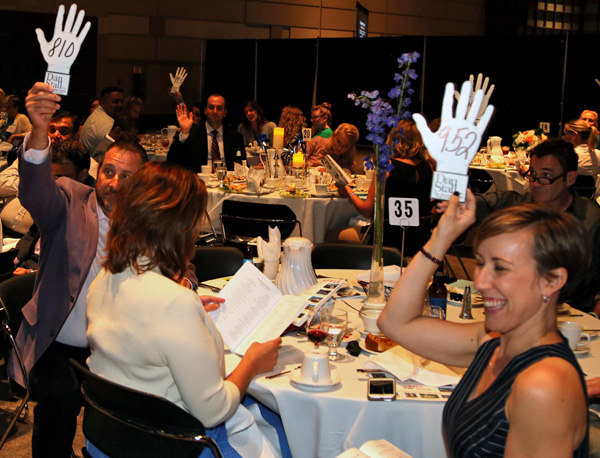 About 650 people attended the event at the Lansing Center and helped children by bidding on items such as trips to Cabo San Lucas, Mexico, St. Andrew’s, Scotland, and Las Vegas; John Mayer and Lady Gaga concerts; and suites for Michigan State University football and Detroit Tigers games.

The event is the Children’s Trust Fund’s major fundraiser and pays for services like respite care, home visitations, child development support and other targeted services allowing local partners around the state to continue to provide education and other prevention programs.

The auction is named in memory of Pam Posthumus, a tireless advocate for preventing child abuse and the wife of former Michigan Lt. Gov. Dick Posthumus. Pam Posthumus was appointed to the Children’s Trust Fund Board of Directors in 1997 and became its chair in 2002.

Steve Yager, the recently retired executive director of the Michigan Department of Health and Human Services Children’s Services Agency, received the 2017 Children’s Advocate Award. Yager has more than 30 years of child welfare experience and headed the agency during a time of great improvements in the well-being and protection of Michigan children – setting Michigan’s child welfare system on the path to exiting federal court oversight that began in 2008.

“Steve has helped kids his entire career and always risen to the occasion when presented with challenges,” Snyder said. “He’s helped make Michigan better and stronger today than we have been in many years.”

Created by the Michigan Legislature in 1982, the Children’s Trust Fund within MDHHS is Michigan’s only statewide nonprofit organization solely dedicated to the prevention of child abuse and neglect. It has raised more than $60 million to support programs that have affected more than 6 million children and families.

The event was made possible by the generosity of the following sponsors: Cinnaire, CNSI, DTE Energy Foundation, Jackson National, Delta Air Lines, M3 Group, Meijer and many more. Mobile bidding was sponsored this year by Verizon Wireless, which allowed anyone to bid on the silent auction even if they weren’t at the Lansing Center.

Pictured above and in the attached photo are bidders at the Jackson National Life table during Wednesday evening's auction.