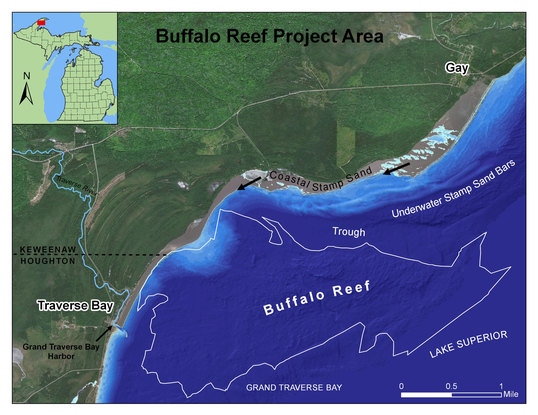 Final approvals were recently granted by government regulatory agencies for a dredging project set to begin this summer at the Grand Traverse Bay Harbor in Houghton County.

The work is part of the ongoing effort to save Buffalo Reef, an important Lake Superior natural fish-spawning reef from being covered by shifting stamp sands.

The stamp sands were created in the early 1900s as a byproduct of copper processing at the Wolverine and Mohawk stamp mills in the community of Gay in Keweenaw County.

Since that time, these coarse, black sands, which were dumped into Lake Superior, have drifted south and are now threatening to cover Buffalo Reef and natural beaches south of the Grand Traverse Bay Harbor.

Over the past roughly 80 years, the stamp sands have moved south – transported by winds, waves and nearshore lake currents – about 5 miles to the Grand Traverse Bay Harbor, covering 1,426 acres of shoreline and lake bottom.

The U.S. Environmental Protection Agency has provided $3.1 million to the U.S. Army Corps of Engineers to design and carry out the dredging work, scheduled for May 2018. 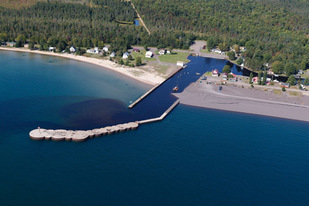 Under the permit, a total of 172,500 cubic yards of stamp sands are expected to be removed from an underwater bedrock trough, moving the sand to a 37-acre placement site that has the capacity to store 380,000 cubic yards. This 2,350-foot-long by 700-foot placement area, located about 1.5 miles from the dredge location, would be north of Buffalo Reef, behind a temporary berm.

Bids are expected to be solicited soon, with a contract awarded in late spring.

“This dredging project would buy 5 to 7 years of protection for the reef and the whitefish juvenile recruitment area south of the harbor,” said Steve Casey, Upper Peninsula district supervisor for the Michigan Department of Environmental Quality’s Water Resources Division. “In the meantime, we need to develop a long-term, adaptive management plan, a solution, for the Gay stamp sands problem.”

The EPA has formed a cooperative multi-entity task force to develop that plan over the next couple of years, which will solicit input from many stakeholders, including the public.

“We’re hoping construction can start on some type of control mechanism for the original pile of stamp sands by 2021, with completion two years after that,” Casey said. “We would then hope to put long-term maintenance dredging in place by 2026. The annual costs for that dredging would depend on which type of long-term remedy is selected.”

The community of Gay is named for Joseph E. Gay, who conducted early explorations of the ore body that would be mined by the Mohawk Mining Co.

Sign up for email updates and learn more about Saving Buffalo Reef at mi.gov/buffaloreef.