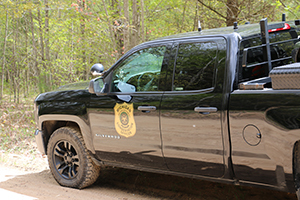 A 39-year-old Osceola County man was arrested over the weekend after leading a Michigan Department of Natural Resources conservation officer on a vehicle pursuit that ended at the man’s residence. James Gross, of Leroy, was arraigned today in the Lake County Trial Court.

Conservation Officer Josiah Killingbeck was checking streams in Lake County for steelhead activity Friday night when, aware of several reports of residential break-ins in the area, he initiated a traffic stop on a vehicle with a loud exhaust and missing license plate light.

After running the driver’s information, Killingbeck confirmed that Gross was wanted on multiple warrants in Newaygo and Osceola counties. When the officer returned to the suspect’s vehicle, Gross admitted that he was aware of the warrants. Killingbeck asked Gross if there was anything in the vehicle that the officer should be aware of; at that point Gross admitted to, and began to reach for a sawed-off shotgun. Killingbeck ordered Gross not to touch the shotgun and opened the driver’s door in an attempt to secure Gross and the firearm. Resisting, Gross said, “Sorry, I can’t,” and quickly drove away.

Unharmed, Killingbeck began pursuing Gross in his marked DNR patrol vehicle, receiving assistance from the Lake County Sheriff’s Office. After a 25-mile chase, Gross returned to his house in Leroy and barricaded himself inside. Officers with the Osceola County Sheriff’s Office and the Reed City Police Department assisted Killingbeck by establishing a perimeter around the house.

After negotiating for an hour, Killingbeck convinced Gross to peacefully surrender. Once Gross had been arrested, Killingbeck found a pistol in the vehicle, but the shotgun was missing. He was able to retrace his pursuit route and locate the shotgun, which Gross had tossed out a window.

Michigan DNR conservation officers are fully certified peace officers who serve the communities they live in by educating the public and enforcing rules and laws to protect natural resources and general criminal laws. Learn more at Michigan.gov/ConservationOfficers.