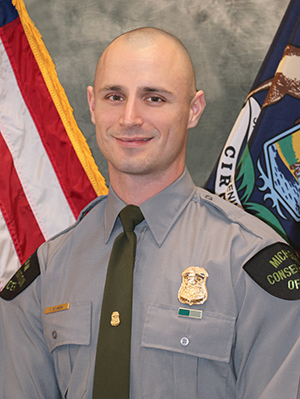 Sumbera was conducting marine patrol offshore in Chippewa County, north of Drummond Island, west of Harbor Island, at approximately 1:43 p.m. when he saw two people in the water clinging to an overturned personal watercraft.

As Sumbera approached, he identified himself as a conservation officer there to help. The younger of the two, a 41-year-old man who didn't know how to swim, was panicked and exhausted, saying, “Thank God.” Both men were improperly wearing torn life jackets and had been in the water for about 10 minutes.

“I’m happy that Sumbera safely returned the men to shore in what could have been a much worse situation had the men not been wearing life jackets,” said Chief Gary Hagler, DNR Law Enforcement Division. “This is an example of how wearing a life jacket can save a life.”

After Sumbera helped the men onto his patrol vessel, he determined both to be in stable condition.

The older man, 64, told Sumbera that they had never operated a personal watercraft before and the high winds and rough water “swamped them extremely fast” when they put the watercraft in reverse.

Sumbera towed the waterlogged watercraft back to the Drummond Island Yacht Haven and returned the two men to shore. He advised the men to obtain and use properly fitting, well-maintained life jackets before their next next adventure.

There have been several drownings and near-drownings in Michigan this summer. If your plans include time on the water, please refer to the DNR website for important tips on boating and Great Lakes beach safety.