'Do Not Eat' Advisory Issued for Deer Taken within five miles of Clark's Marsh, Oscoda Township

'Do Not Eat' Advisory Issued for Deer Taken within five miles of Clark's Marsh, Oscoda Township

The Michigan departments of Health and Human Services (MDHHS) and Natural Resources (DNR) today issued a ‘Do Not Eat’ advisory for deer taken within approximately five miles of Clark’s Marsh in Oscoda Township. The advisory is due to high levels of PFOS (perfluorooctane sulfonic acid) found in a single deer taken about two miles from Clark’s Marsh, which borders the former Wurtsmith Air Force Base. PFOS is one type of PFAS (per- and polyfluoroalkyl substances) chemical.

One deer out of twenty tested around the former Wurtsmith Air Force Base was found to have high levels of PFOS. The level of PFOS in the muscle of the deer was 547 parts per billion, exceeding the level of 300 ppb at which action is recommended. PFAS was either not found or was at low levels in muscle samples from the other 19 deer. Although only one deer of this group tested at such high levels, the advisory was issued to protect the health of anyone eating venison taken within approximately five miles of Clark’s Marsh. The state has plans to test more deer from this area. 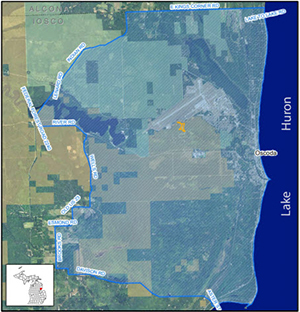 The five-mile radius encircles the Wurtsmith base property and covers what the DNR has estimated to be the expected travel range of deer living in or near the marsh. The area covered by the deer consumption advisory issued can be described as:

DNR also collected an additional 60 deer for PFAS testing this year as part of the Michigan PFAS Action Response Team’s work on this emerging contaminant.  In addition to the testing around Wurtsmith, 20 deer were taken from near each of the PFAS investigation sites in Alpena, Rockford and Grayling with known contamination in lakes and rivers. The deer meat tested from these areas was found to have no PFAS or very low levels of the chemical. An additional 48 samples of deer muscle from the 2017 hunting season were tested from other areas across the state. Preliminary data for these deer also show no PFAS contamination or very low levels of the chemical.

PFAS are chemicals that are in Class B fire-fighting foam that was used at the air force base near Wurtsmith and other sites in Michigan. These chemicals are also found in stain and water repellants, personal care products, and many other consumer goods. Some health studies have linked PFAS to health issues such as thyroid disease, increased cholesterol levels, impaired immune system function, reproductive issues, high blood pressure in pregnant women, and increased chance of kidney and testicular cancers.

MDNR and MDHHS developed this investigation in response to questions from hunters concerned about harvesting deer in contaminated areas.  This is the first study of its kind and very little scientific information exists on whitetail deer and PFAS chemicals.

It is unknown how PFAS could accumulate to this level in deer. The State of Michigan is investigating the circumstances of the one deer with elevated levels and doing further analysis on these test results to learn more about PFAS in deer and wildlife. In addition, the state will be doing additional testing on deer from the Clark’s Marsh region and performing modeling studies to learn about PFAS consumption in wildlife.

MDHHS and MDNR advise hunters to dispose of any deer in their freezer that may have come from this area and do not eat it.

If you have health related questions please contact MDHHS at 1-800-648-6942.  Hunters can contact the MDNR at 517-284-6057 or DNR-CustomerService@michigan.gov for information about deer tags that were used in this region.