2019 Black Lake sturgeon season over in less than 80 minutes

2019 Black Lake sturgeon season over in less than 80 minutes 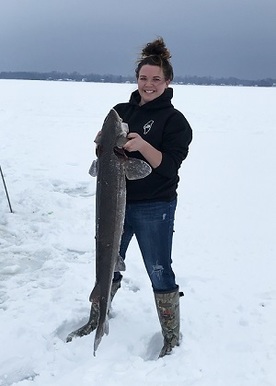 This year’s sturgeon season on Black Lake (Cheboygan County, Michigan) ended at 9:18 a.m. Saturday, Feb. 2 – after only 78 minutes of fishing.

The fishing season, which included spearing or hook-and-line fishing, was scheduled to run Feb. 2-6, or until the harvest quota had been reached. This year's allocation of sturgeon for Black Lake anglers was seven fish, although Department of Natural Resources officials set a harvest quota of six fish.

There were 403 registered anglers on the ice Saturday, slightly down from 422 the year before. Anglers of all ages again participated, including a good number of supervised youth.

Participating anglers were notified of the season closure in a variety of ways; including a fishing telephone hotline, text alerts to those who provided cell phone numbers, signal cannons, mortar rounds and fireworks. All methods were used to indicate the season’s end within minutes of the final fish being harvested. DNR law enforcement officials and other department personnel again were embedded in the on-ice fishing communities and were able to quickly report harvested fish and contact all participating anglers about the season's close.

“We allow for any licensed angler to participate – as long as they register – so we need to have a significant on-ice presence of DNR personnel to protect the population of lake sturgeon in Black Lake from overharvest,” said DNR fisheries manager Dave Borgeson. “This year was another successful season for angler participation, fish harvest and quick response times, as well as from a safety perspective.”

For more information on lake sturgeon in Michigan, visit Michigan.gov/Sturgeon.

Sturgeon tag scan: Michigan DNR fisheries biologist Tim Cwalinski scans one of the sturgeon taken during the 2019 Black Lake season to see if it previously had been tagged.