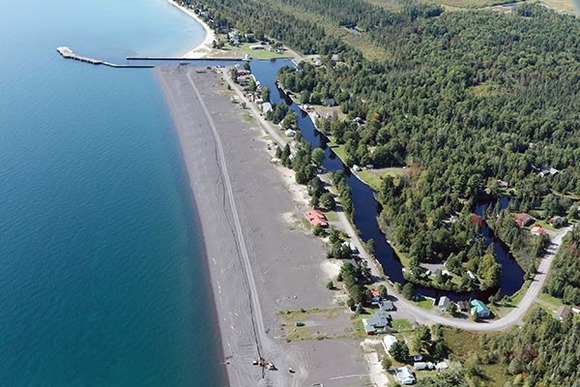 Shifts in the stamp sands deposit over the years are threatening to bury Buffalo Reef, destroying the spawning habitat and recruitment areas important to Lake Superior whitefish and lake trout.

The natural reef is located off the east side of the Keweenaw Peninsula. The stamp sands from the Mohawk and Wolverine mines are deposited along the shore from the community of Gay south through portions of Keweenaw and Houghton counties.

The Task Force will be accepting comments on the Draft Preliminary Alternatives Analysis until March 8, 2019.

These comments will be incorporated into the draft, along with preliminary cost estimates for each alternative. A Draft Alternatives Analysis will then be released with this additional information incorporated in May. This report will be used to select the top two to four alternatives for further, detailed analysis.

The task force will hold a public meeting on the selection process in Lake Linden during this summer. Detailed analysis of the top two to four alternatives will start in the fall of 2019.

Meanwhile, dredging of the Grand Traverse Harbor and the “trough” area, situated north of Buffalo Reef will begin in spring 2019.

Comments may on the Draft Preliminary Alternatives Analysis may be sent to Steven Check, U.S. Army Corps of Engineers, via email at: Steven.G.Check@usace.army.mil or U.S. mail at: 477 Michigan Avenue, Detroit, Michigan 48226-2550.

To find out more about the effort to save Buffalo Reef, including media photos, visit Michigan.gov/BuffaloReef.