If your leisure-time plans include boating or fishing, recent changes in Michigan’s Natural Resources and Environmental Protection Act (NREPA) may affect you. Beginning March 21, watercraft users in the state are required to take steps to prevent the spread of aquatic invasive species. Also, anyone fishing with live or cut bait or practicing catch-and-release fishing will need to take precautions to limit the movement of invasive species and fish diseases.

What boaters need to know 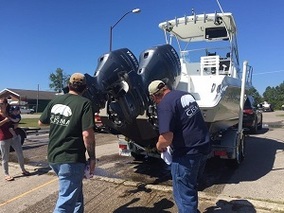 For boaters, amendments to Sec. 41325 of NREPA (Act 451 of 1994), finalized near the close of the 2018 legislative session, affect both motorized and nonmotorized watercraft, trailers and other conveyances used to move watercraft.
In addition to the existing law requiring all aquatic plants be removed from boats and trailers before launching, the changes require the following, prior to transporting any watercraft over land:

This means after trailering boats, and before getting on the road, boaters must pull plugs, drain water and remove plants and debris from all watercraft, trailers and other conveyances. A short video from the Michigan Department of Environmental Quality shows the steps boaters can take to comply with the new law.

What anglers need to know

For anglers, NREPA amendments codify the Michigan DNR’s Fisheries Order 245 regarding the release of baitfish, collection and use of baitfish and cut bait, and release of captured fish, specifically: 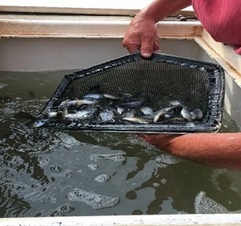 Whether purchased or collected, unused baitfish should be disposed of on land or in the trash – never in the water. Any baitfish an angler collects may be used only in the waters where it was originally collected.

“It is important to clarify that anglers are allowed to catch and release fish,” said Seth Herbst, the DNR’s aquatic species and regulatory affairs manager. “Anglers who are catching and releasing fish should only release the fish back into the same water or in a connecting body of water the fish could have reached on its own.”

“Many invasive species move from one location to another with the help of human transportation,” said Kevin Walters, an aquatic biologist with the DEQ. “Plants like Eurasian watermilfoil or starry stonewort can travel from lake to lake on boats and trailers. Just one plant fragment can start a new population.”

Draining boats and cleaning trailers can limit the spread of zebra and quagga mussels, which are common in some inland lakes. A more recent invader, the tiny New Zealand mudsnail, can hitchhike from river to river when mud or debris is left on kayaks, canoes and gear.

Moving fish from one body of water to another can spread fish diseases, like heterosporis (a parasite of yellow perch) and viral hemorrhagic septicemia virus (VHSv), a serious disease that can affect many fish species. Fish diseases also can be spread to new locations when water carrying parasites or infection is transferred via bilges, live wells or ballast tanks.

What you should do

Here are some simple rules of thumb to help boaters and anglers navigate these laws:

And remember when practicing catch-and-release fishing, return the fish to the water where it was caught.

For more information on the new boating and fishing laws, visit the Laws section at Michigan.gov/invasives.

Cleaning boat: It just takes a few minutes to look for and remove debris and plants from your boat and trailer. Be sure to pull the plug, too!