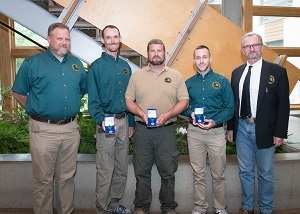 “I am proud of the efforts of these three guys,” said Mason. “The Wildlife Division is lucky to have such dedicated, brave employees on board and serving the people of Michigan.”

Hamilton and Sting are wildlife assistants working in the DNR's wildlife field office in Cass City. In the course of their work March 14, the pair were visiting the Geiger Road boating access site on Saginaw Bay when they noticed an ice fisherman in distress. He appeared to have fallen through the ice and was trapped in roughly 4 feet of water. The 82-year-old man was unable to extricate himself out of the water.

Sting and Hamilton helped the man out of the water and off the ice, where they noticed the man showed signs of hypothermia. Hamilton monitored the man’s condition as he drove the man home. The man had refused medical assistance, but Sting, who was following behind Hamilton in his DNR truck, contacted emergency services to meet them at the man’s house. The man was treated and made a full recovery, thanks to Sting and Hamilton’s efforts.

Jeremiah Heise, a wildlife biologist at the DNR's wildlife field office in St. Charles, was returning a phone call to a St. Charles citizen April 12 and noticed that the woman sounded disoriented. Over the course of their conversation, the woman mentioned that she was diabetic. Suspecting a low blood sugar incident, Heise contacted emergency services and had them dispatched to the woman’s home. She was taken to the hospital. Heise’s keen observation skills and decisive action helped the woman to make a full recovery.

Nate Levitte, DNR Wildlife Division field operations manager and supervisor of all three men, echoed Mason’s sentiments. “I am tremendously proud to work with these members of our DNR family,” said Levitte.