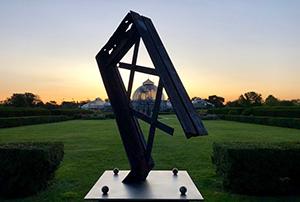 The Anna Scripps Whitcomb Conservatory has a lot to celebrate. One of Belle Isle Park's most significant historic structures, the landmark reopened to the public this past June, and a new public art sculpture was officially dedicated in the conservatory gardens yesterday.

This past winter and spring, the original 1904 trusses that supported the conservatory’s dome were replaced with galvanized steel as part of a major renovation project.

At the Aug. 15 dedication event, the Michigan Department of Natural Resources and Belle Isle Conservancy thanked the Ralph C. Wilson, Jr. Foundation for their generous $1 million grant, which was the impetus for completing the first phase of the renovation project, and dedicated a newly installed public art sculpture in the foundation's honor.

The sculpture, created by Detroit Design Center co-owners and brothers Erik and Israel Nordin, incorporates a piece of the conservatory’s original truss structure. The Detroit artists, inspired by the Ralph C. Wilson, Jr. Foundation’s contribution to the park, donated the art piece to recognize the foundation’s support of the Detroit community. Situated in the conservatory garden near the east entrance, the public art sculpture, named The Dancer, represents the heartfelt thanks extended to the foundation by the brothers on behalf of the citizens of Detroit.

“As Detroit artists, we're honored to have had the opportunity to create a sculpture that helps tell the story of the efforts to preserve this important Detroit landmark," said Erik and Israel Nordin. "We feel that utilizing part of the original historic truss in the art piece was the purest way to pay tribute to the genius and architecture of Albert Kahn. We are so thankful to the Ralph C. Wilson, Jr. Foundation for making it possible to share the artifact and its story with everyone passionate about Belle Isle and its future.”

The $2.5 million renovation project was funded by a $1 million grant from the Ralph C. Wilson, Jr. Foundation Grant, with remaining funds sourced from DNR Parks and Recreation funds. The foundation has also supported other key park projects, such as the endowment for the Piet Oudolf Garden and Iron Belle Trail construction and trailhead.

"With the installation of this public art piece, visitors to the conservatory’s garden will be reminded of the conservatory’s storied history and the many partners, businesses and community members that have contributed their talents and resources to help revitalize the island," said Ron Olson, DNR chief of Parks and Recreation. "On behalf of the DNR and the Belle Isle Conservancy, I would like to extend our thanks to the Ralph C. Wilson, Jr. Foundation and Erik and Israel Nordin for their tremendous contribution to this Detroit landmark."

The Anna Scripps Whitcomb Conservatory is one of the nation’s oldest turn-of-the-century glass houses still in existence. The conservatory boasts 13 acres, a formal perennial garden, seasonal floral beds, a lily pond garden and five flora exhibits. The two buildings, designed by Albert Kahn, opened Aug. 18, 1904 and the conservatory was dedicated to Anna Scripps Whitcomb, who donated her 600-plant orchid collection to the city of Detroit, April 6, 1955.