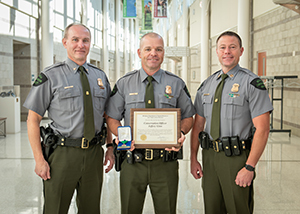 Michigan Conservation Officer Jeff Ginn’s actions last year to resuscitate a man in a Newaygo motel were recognized with a Department of Natural Resources Lifesaving Award – his fourth such honor. Ginn was presented with the award at the October Michigan Natural Resources Commission meeting in Lansing.

Nov. 13, Ginn responded to a medical emergency involving a 75-year-old man who was reported unresponsive at Cronk’s Oakridge Motel, located at 9135 Mason Drive in Newaygo. Within four minutes of receiving the call, Ginn arrived at the scene and evaluated the man, who did not have a pulse and was not breathing. Ginn moved the victim to the ground so he could use his department-issued automatic external defibrillator – a portable medical device that analyzes the heart’s rhythm and, if necessary, automatically delivers an electrical shock, or defibrillation, to help the heart restore an effective rhythm.

One day after the incident, the man was conscious with full neurological function.

“Jeff’s help gave this patient a fighting chance of survival,” said Jason Best, field supervisor at Life EMS of Newaygo County. “It is very nice to have this compassion and helpfulness in a rural county where help is limited.”

Conservation officers live in the communities that they serve and often are the first emergency responder to arrive at a scene.

“I’m honored to recognize Conservation Officer Jeff Ginn for providing lifesaving care to this man,” said Chief Gary Hagler, DNR Law Enforcement Division. “His fast response and training that helped save this man’s life are excellent examples of what a conservation officer is capable of. You never know when an emergency is going to arise, and we are prepared to serve our communities.”

Ginn has been a conservation officer with the DNR since 2006 and patrols Newaygo County. His earlier lifesaving actions include:

Apply now for the next Conservation Officer Academy

Learn more about conservation officers and the hiring process and qualifications at Michigan.gov/ConservationOfficers.