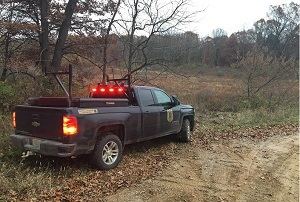 The Michigan Department of Natural Resources announced that two teens – a 17-year-old from Plainwell and a 19-year-old from Kalamazoo – have been charged with seven felony counts connected to a series of recent vehicle break-ins in Allegan, Barry and Kalamazoo counties. Additional charges are expected to be filed by other agencies.

The teens were taken into custody Tuesday following a vehicle and foot pursuit by DNR Conservation Officer Richard Cardenas.

Barry County Dispatch received several complaints Tuesday about vehicle break-ins in the Hastings area. The Hastings Police Department then issued a “be on the lookout” alert to local law enforcement for two suspects – considered armed and highly dangerous – driving a red Toyota Highlander.

At 5:20 p.m. Tuesday, Cardenas noticed an occupied vehicle matching the alert description parked in an area commonly used by hunters, located off Bowens Mill Road, in the Barry State Game Area. Several unoccupied vehicles also parked in the area had smashed windows. Cardenas positively identified the occupied vehicle as the one from the alert and notified Barry County Dispatch of the location and requested assistance.

When Cardenas activated the emergency lights on his DNR patrol truck, the suspects drove away, initiating a vehicle chase that exceeded speeds of 90 miles per hour. The suspects’ vehicle eventually left the road and landed in a swamp. The suspects then exited the vehicle and began to flee. After a short foot chase, Cardenas was able to apprehend them.

Deputies with the Barry County Sheriff’s Department arrived on the scene and assisted Cardenas with arresting and transporting the suspects to the Barry County Jail. Stolen firearms and other items that are believed to have been stolen were found in the vehicle, and a stolen handgun was located in the swamp after one of the suspects attempted to hide it.

Conservation Officer Cardenas patrols Barry County and has been with the DNR Law Enforcement Division for more than five years.

The DNR is currently accepting applications for its July 2020 Conservation Officer Academy in Lansing. Learn more about conservation officers and the hiring process and qualifications at Michigan.gov/ConservationOfficers.