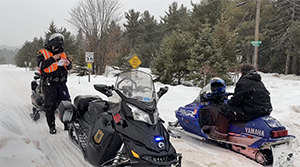 “It’s always a really busy weekend” said Sgt. Jerry Fitzgibbon, the DNR’s acting district law supervisor for the eastern Upper Peninsula. “We want everyone to know ahead of time that there will be an increased presence of officers conducting snowmobile patrols.”

The most recent snowmobile fatality in Michigan occurred Wednesday night in Sault Ste. Marie in Chippewa County. Fitzgibbon hopes that an increased presence of officers will decrease the number of snowmobile injuries, fatalities and noise complaints.

The DNR’s Ride Right snowmobile safety campaign offers snowmobilers several reminders, including to ride on the right side of the trail, ride at a safe speed and to ride sober.

Fitzgibbon adds that poor visibility can also be a contributing factor to snowmobile accidents.

“Following too close to the snowmobile in front of you or riding during a snowstorm reduces your visibility and increases the risk of missing a curve, colliding with a tree or even other snowmobiles,” said Fitzgibbon. “Everyone should use extreme caution and slow down when their visibility is impacted.”

“There will be multiple sound enforcement patrols at various locations, on and off the trails,” said Lt. Ryan Aho, the DNR’s district law supervisor for the western Upper Peninsula. “We don’t want to lose any more snowmobile trails because of noise complaints.”

In recent years, excessive noise from snowmobiles and trespassing complaints have resulted in the loss of over 400 miles of trails after landowners closed access that navigated through their private properties.

Good weekend trail conditions are forecast for much of the region.

“Trails are open and groomed with the exception of portions in the eastern Upper Peninsula,” said Ron Yesney, DNR U.P. trails coordinator. “We have good snow in most of the U.P. and there is more snow on the way.”

Learn more about snowmobiling opportunities and trail safety resources at Michigan.gov/Snowmobiling. For the latest information on trail and other DNR-managed facility, closures, visit Michigan.gov/DNRClosures.