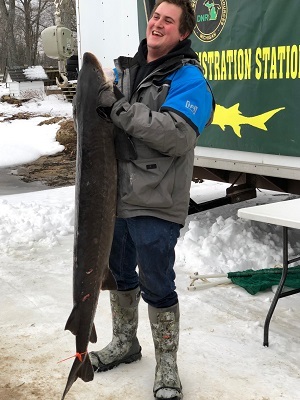 The fishing season, which included spearing or hook-and-line fishing, was scheduled to run Feb. 1-5, or until the harvest quota had been reached. This year's allocation of sturgeon for Black Lake anglers was seven fish, although Department of Natural Resources officials set a harvest quota of six fish to reduce the risk of over-fishing.

There were 472 registered anglers on the ice Saturday, the highest total since the inception of the open sturgeon fishery. People of all ages again participated, and from a number of states.

According to the DNR, three of the six sturgeon harvested were males ranging from 44 to 60 inches in length, and 16 to 51 pounds in weight. The three females ranged from 47 to 75 inches long, and 19 to 100 pounds in weight.

DNR fisheries biologist Tim Cwalinski said that three of the six fish had been captured before by Michigan State University and the DNR during spring spawning runs in the Black River:

Participating anglers were notified of the season’s end in a variety of ways: text alerts to those who provided cell phone numbers, a fishing telephone hotline, UAW Black Lake Conference Center siren, and ice shanty visits from DNR personnel. All methods were used within minutes of the final fish being harvested. DNR fisheries and law enforcement officials were embedded in the on-ice fishing communities and were able to quickly report harvested fish and contact all participating anglers about the season's close.

“We allow for any licensed angler to participate – as long as they register – so we need to have a significant on-ice presence to protect the population of lake sturgeon in Black Lake from overharvest,” said Cwalinski. “This year was another successful season for angler participation, fish harvest and quick response times, as well as from a safety perspective.”

For more information on lake sturgeon in Michigan, visit Michigan.gov/Sturgeon.