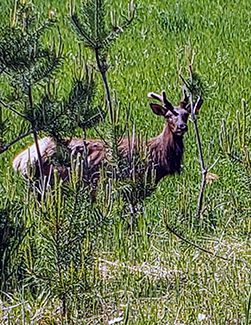 Wildlife biologists and technicians with the Michigan Department of Natural Resources have been tracking reports of a bull elk spotted in the south-central part of the Upper Peninsula in Menominee County.

The young elk was reported first by a private landowner June 6, within about 10 miles of the Wisconsin border. Since then, there have been several additional sightings, including some unconfirmed reports of an accompanying cow elk.

The presence of the bull elk has been confirmed with photographs.

Elk, like deer and moose, are mammals of the deer family, referred to as cervids.

“Our DNR biologists are monitoring the situation as we work to confirm the origin of this animal,” said John Pepin, DNR deputy public information officer. “Contact has been made with privately owned cervid facilities within a reasonable range of the sightings, and no elk from those operations have been reported missing. We have also checked with agency officials to confirm there have been no reports of elk missing from Wisconsin facilities.”

The bull elk has a three-digit orange ear tag in its left ear, which has not been seen clearly enough to read.

DNR biologists have been working closely with their counterparts at the Wisconsin Department of Natural Resources to establish whether the elk may be from one of the state's two wild elk herds.

According to the Wisconsin DNR website, elk are found in two distinct ranges there. The largest, and oldest, elk herd in the state is the Clam Lake elk herd, which ranges across Ashland, Bayfield, Price, Sawyer and Rusk counties in northern Wisconsin. The other, the Black River elk herd, is found in the forested region of Jackson County in the central part of the state.

"This is based on their knowledge of some of the Black River elk being reported outside of their typical range over the past couple of months," Sexton said. "It is also based on the color, style and placement of ear tag reported, along with the estimated age of the animal gathered from public reports and photos. We should be able to confirm the origin once we have an accurate report of the ear tag number."

The latest estimates put the Clam Lake elk herd at over 250 animals, with about 80 more in the Black River herd.

Elk are known to have a large range and, like deer and other animals, likely move back and forth across the Michigan-Wisconsin border. Michigan’s native elk disappeared from the state around 1875.

In the northern Lower Peninsula, an elk herd has been well-established since seven animals were reintroduced to that area in 1918. Elk browse in the early morning and late evening, sharing similar habitats with white-tailed deer.

“We are interested in receiving location reports of the elk,” Pepin said. “It is important for anyone who may see the elk to observe it from a distance. Noting the time and nearest crossroads would be helpful.”

Elk weigh between 350 and 900 pounds and stand 4 to 5 feet tall at the shoulder. Calves weighing 25-30 pounds are born in late May through early June.

“State veterinarians from Michigan and Wisconsin have been in contact and have confirmed that Wisconsin has been testing its elk population, with no positive cases of chronic wasting disease detected,” Pepin said.

Under a state wildlife conservation order, if the elk is determined to have escaped from a privately owned cervid facility, the DNR has the authority to dispatch the animal after 48 hours. Similar rules are in place in Wisconsin.

“So far, the elk reports have not indicated the animal or animals have been causing any nuisance or public safety issues. Chances of the elk being positive for CWD are low,” said Chad Stewart, DNR deer and elk program specialist. “Given that evidence suggests the elk may be free-ranging, we are going to continue to monitor the situation. At this point in time, we are not planning to cull the elk.”

For more information on elk in Michigan, visit the DNR’s webpage at Michigan.gov/Elk.