Most of us recognize the American robin.

With its cheery song bringing a welcome sign of spring, these red-breasted birds are a common sight in Michigan – so familiar and appreciated, in fact, that the robin was named the state bird in 1931.

But there was a time after World War II when robins had become less common due to the damaging effects of DDT (dichloro-diphenyl-trichloroethane) and other pesticides.

Fortunately, robin populations bounced back after DDT use was banned in the United States in 1972. However, many other nongame species – meaning wildlife that isn’t hunted – have needed, and continue to need, help to protect them from becoming rare or even extinct.

That’s where the Nongame Wildlife Fund comes in.

The fund, which is coordinated by the Michigan Department of Natural Resources’ Wildlife Division, assists with the division’s goals by identifying, protecting, managing and restoring Michigan's biological diversity.

The Nongame Wildlife Fund is responsible for initiating, developing and implementing critical projects vital to the needs of Michigan's endangered, threatened and nongame animals, plants and their habitats.

Since its inception, the Nongame Wildlife Fund has raised nearly $24 million in support of critical projects for nongame species, which includes more than 80 percent of Michigan’s wildlife.

“The fund aims not only to restore populations of endangered and threatened species but to maintain present populations of animals and plants and to promote appreciation of Michigan's nongame wildlife,” said Hannah Schauer, a DNR wildlife technician. 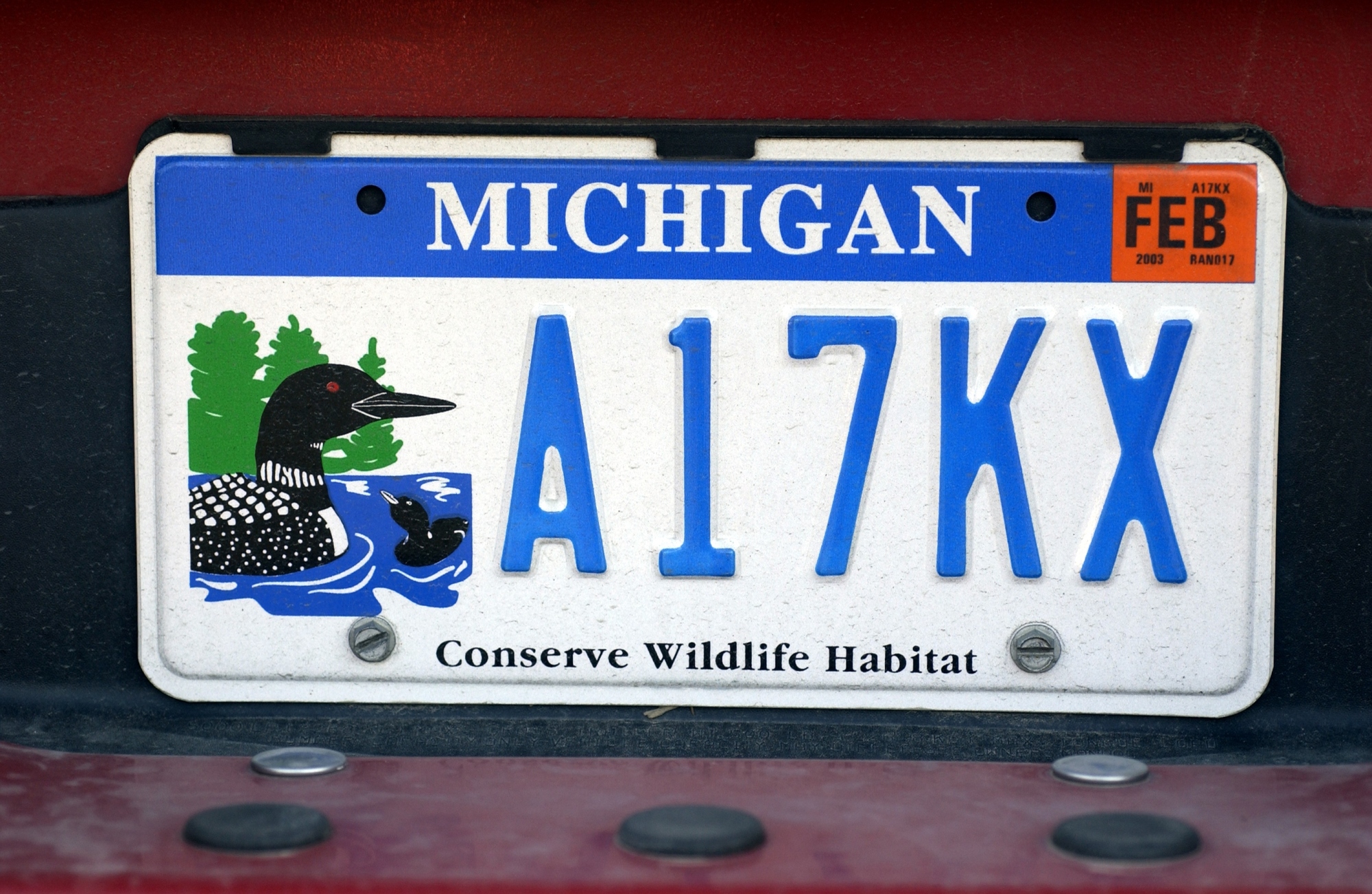 Funds have been raised for these important management efforts through voluntary check-off contributions on state income tax forms (the check-off ended when the fund reached $6 million, as dictated by state law), sales of the wildlife habitat specialty license plates and direct donations.

The effort to bolster Michigan’s nongame wildlife has yielded some notable progress over the last few decades. 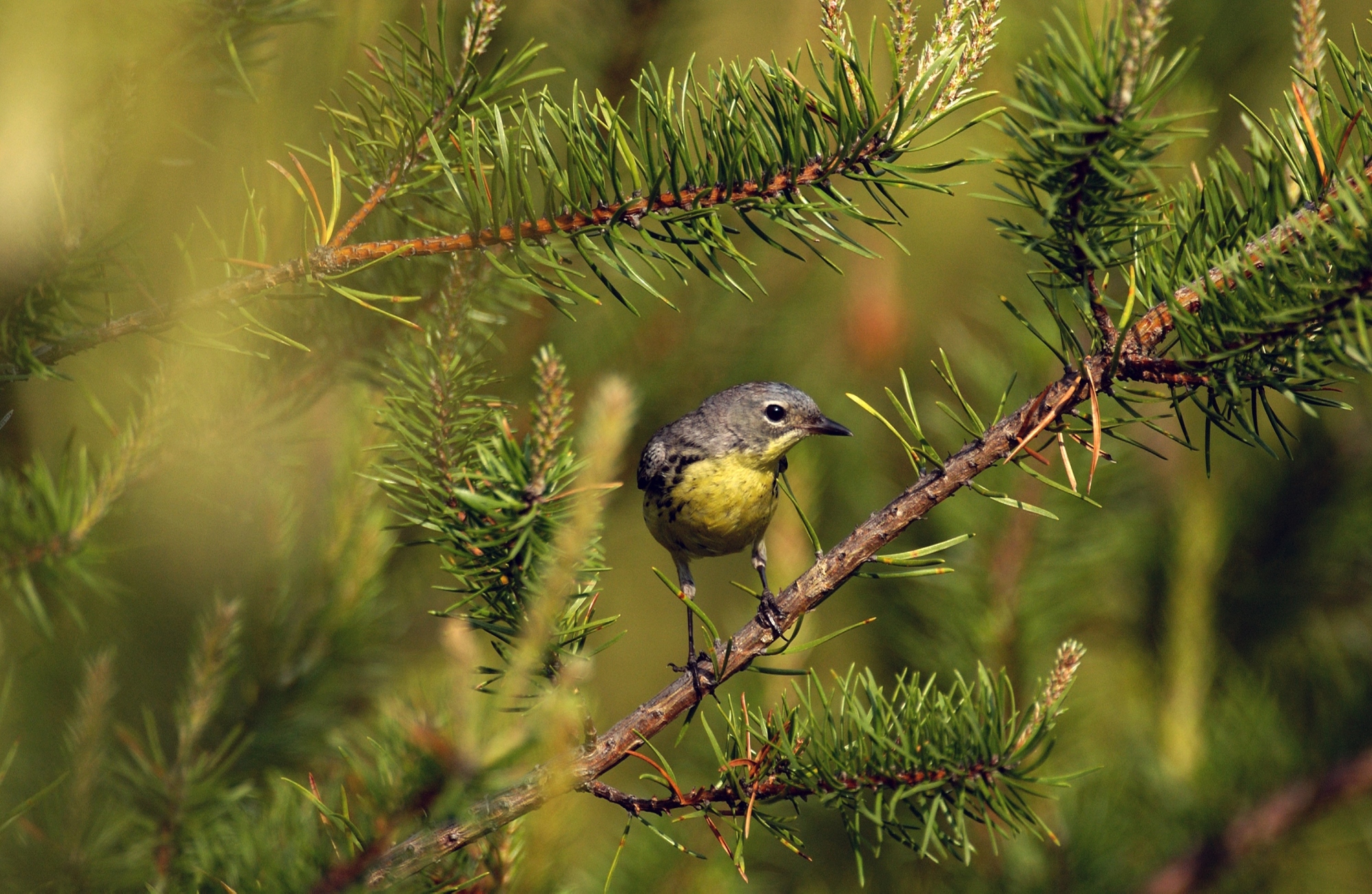 One of the most significant success stories – and one that’s unique to Michigan – stars a rare songbird called the Kirtland’s warbler, one of the original species to be listed as part of the Endangered Species Act of 1973.

Visitors come from all over the world to see these birds, which nest in just a few counties in Michigan's northern Lower and Upper peninsulas, a few sites in Wisconsin and Ontario, and nowhere else on Earth.

The DNR and many partners manage the specific type of jack pine habitat that the Kirtland’s warbler requires by logging, burning, seeding and replanting on a rotational basis.

Trees aren't cut down until they're mature and large enough to be economically valuable, which helps maintain nesting habitat for the warblers while supporting the commercial harvest of jack pine.

Several million jack pine seedlings are planted each year. The birds have specific nesting requirements which include reliance on young jack pine trees.

“The population of the rarest warbler in North America has increased dramatically through management and protection of more than 150,000 acres of jack pine habitat in Michigan,” said Dan Kennedy, DNR threatened and endangered species specialist.

The annual Kirtland's warbler census, which tallies the number of singing males, has shown a significant increase in the species' population over the last 40 years – from approximately 200 singing males in 1972 to 2,300 this year.

"The recovery of the Kirtland's warbler is a real success story for endangered species management," Kennedy said. "This conservation effort has benefited Michigan's economy, including jobs associated with tourism and timber products, and helped conserve our biological legacy." 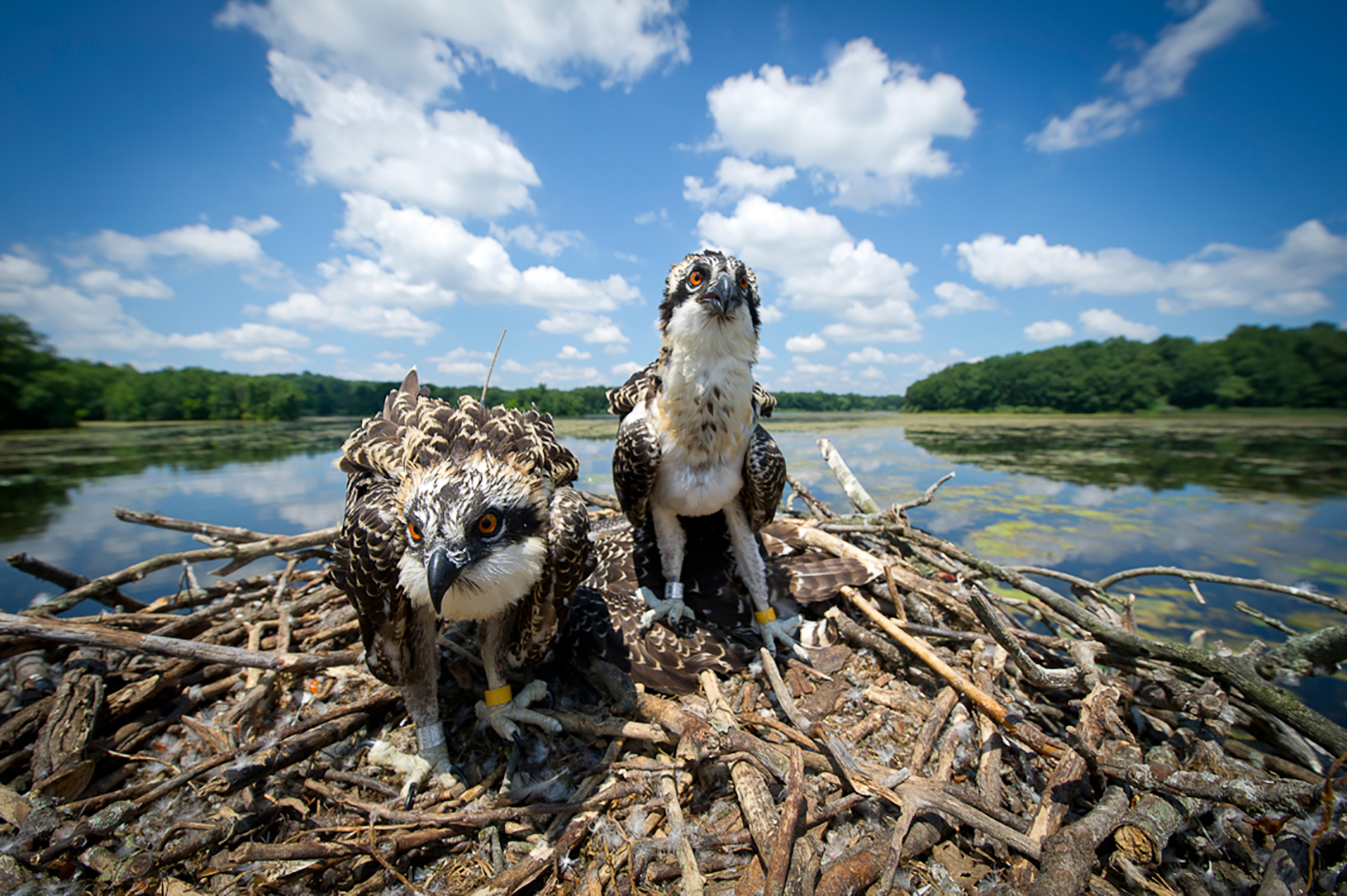 Many of Michigan’s nongame wildlife conservation victories involve birds, more specifically birds of prey. One notable example is the osprey.

Once nearly absent from much of Michigan due to the effects of DDT, other pesticides and habitat loss, Michigan’s osprey population is making a comeback thanks in part to the DNR’s osprey reintroduction program.

Started in 2008 and supported by the Nongame Wildlife Fund, this reintroduction program removed chicks from active nests in northern Michigan and reared them in man-made towers in southern Michigan, a process called “hacking.”

In 2015, at least 60 active nests were identified in southern Michigan – a substantial increase from the single active nest reported in 2002.

"Each year we have new nests, and we have already exceeded our original goal of 30 active nests by 2020,” said Julie Oakes, a DNR wildlife biologist. “We have been able to remove ospreys from the threatened species list to a species of special concern and restore their numbers in Michigan."

The DNR and several partner organizations monitor the revitalization of this species by outfitting osprey chicks with “backpack” GPS telemetry units and tracking their movements and migration patterns.

Anyone can follow along and find out where the birds have been by looking at the Michigan Osprey website, www.michiganosprey.org. 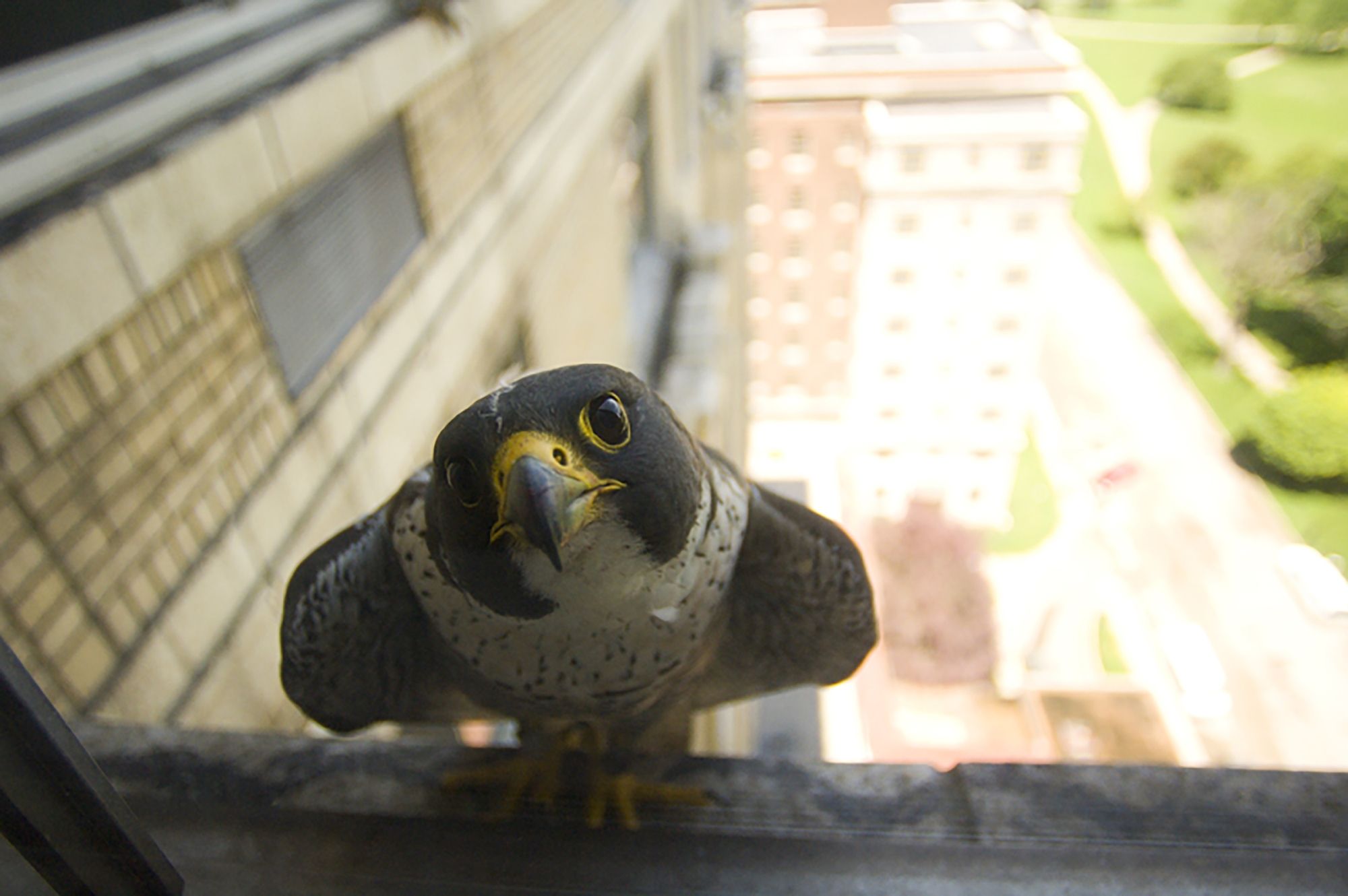 Peregrine falcons and bald eagles – two other birds of prey whose populations were decimated by pesticides – also are on the upswing as a result of similar conservation efforts.

Peregrines, virtually eradicated from eastern North America by the middle of the 20th century, today are successfully nesting in urban centers of southern Michigan, on the most iconic bridges across the state and along the Upper Peninsula’s rocky Lake Superior shoreline.

The bald eagle’s numbers declined dramatically in the 1950s and 1960s until there were fewer than 1,000 nesting eagles remaining in the U.S. by 1963. Today, the species has recovered to a point where its existence is no longer imperiled.

With over 800 active eagle nests in Michigan, eagles can be found in almost all of the state’s 83 counties. 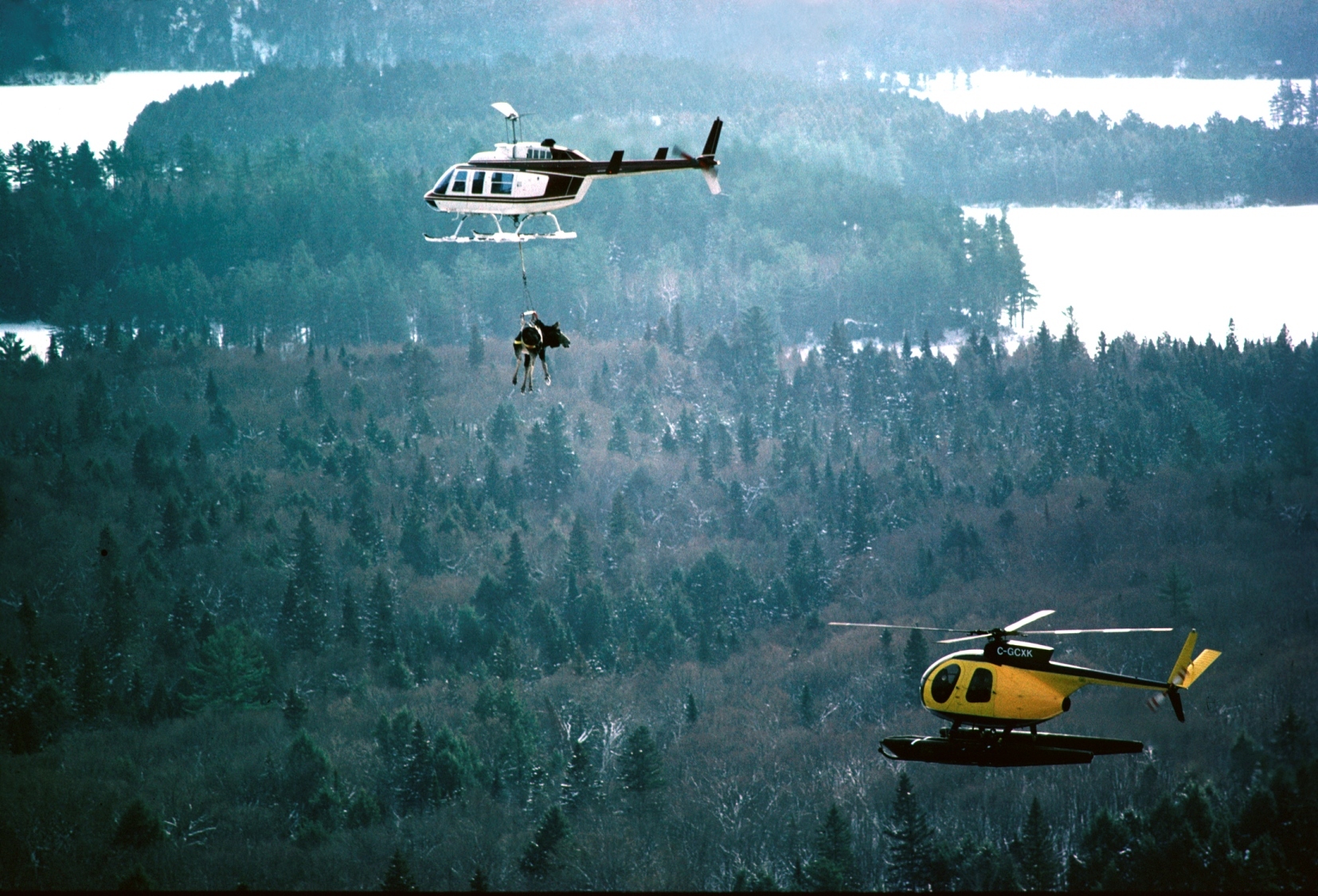 “Most of the mammal successes have been so successful that we have seasons on them: marten, fisher, deer and elk,” said Chris Hoving, adaptation specialist with the DNR Wildlife Division. “At one time, they were nongame, or at least not hunted.”

Although moose are not an example of a species that has rebounded to the point where it can be hunted, one memorable nongame endeavor was the reintroduction of the species to Michigan in the Upper Peninsula.

Native to Michigan, moose disappeared from the Lower Peninsula in the 1890s and only a few scattered individuals remained in the Upper Peninsula.

In the mid-1980s, the DNR translocated 59 moose – using helicopters, in an operation remembered as the “moose lift” – from Algonquin Provincial Park in Ontario, Canada, and released them in Marquette County.

A 2016 moose population survey estimates a population of 323 moose in the western U.P.

As for reptiles and amphibians, collectively known as herpetofauna or “herps,” ongoing projects include the Michigan Herp Atlas, which aims to collect data about Michigan's native amphibians and reptiles in order to document their distribution and changes in their populations statewide, and the annual spring volunteer frog and toad survey.

“We have collected a large, valuable data set to help us evaluate Michigan’s frog and toad populations,” said DNR 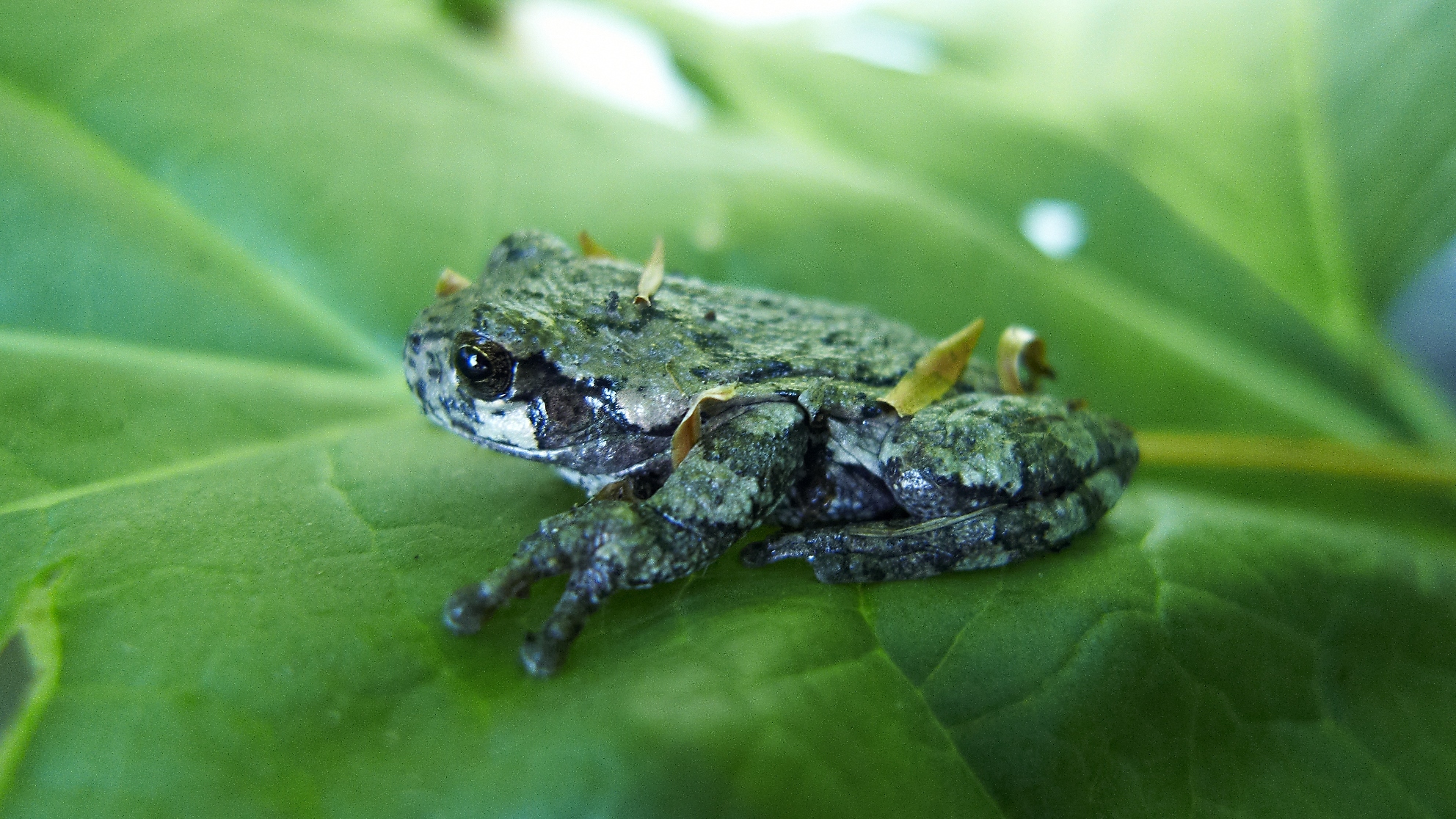 nongame wildlife biologist Lori Sargent. “We’re now able to start watching trends and thinking about how to slow down some of the species’ declines and, hopefully, increase awareness of their plight so that conservation efforts will be enacted in the future.”

Schauer said it’s important to remember that not all nongame animals are threatened or endangered species, or even species of special concern.

“Nongame also includes animals that aren’t harvested but aren’t necessarily listed as special concern, threatened or endangered – a good example of that would be the American robin,” she said. “One of the primary goals of the Nongame Wildlife Fund is to keep these common species common.”

Want to help Michigan’s nongame wildlife? There are several ways to contribute: by purchasing a wildlife habitat license plate or Living Resources patch or by making a tax-deductible donation.