For many decades, passing on the skills and knowledge of the hunting tradition from adults to youth has been a meaningful and vitally important part of our heritage in Michigan.

Today, the practice continues, often with the help and support of hunters' groups and the Michigan Department of Natural Resources.

One fine example of seeing this process in action was a recent youth hunt at the Flat River State Game Area, which encompasses over 11,000 acres in Ionia and Montcalm counties.

The annual January youth hunting event started out five years ago as a rabbit hunt, but it's morphed into a small game hunt. That proved to be a significant change this year as weather factors left rabbit hunters battling long odds, while squirrel hunters conducted business as usual.

Indeed, a lack of snow - following almost a week of warm, rainy weather - made it hard to see rabbits in the thick underbrush at the game area. But the bare trees were perfect for squirrel hunters and the youngsters attending the event who chose to squirrel hunt.

The rabbit hunt, which was the brainchild of the staff at Flat River, seemed like a perfect fit for both the habitat and the clientele.

"We talked about what we could do, kicked around different ideas, and decided on this," explained DNR wildlife biologist John Niewoonder. "We got a couple of sportsmen's groups involved and everybody jumped on board.

"They're all about kids and getting kids involved and there have been a lot of things tried like this, but this one has been very successful - we get a lot of kids and this hunt seems to sustain itself."

Niewoonder said the event has gotten bigger and better every year.

"The only problem we seem to have with it is the weather," he said.

Three years ago, the Michigan Squirrel Dog Association contacted Niewoonder and asked if they'd be welcome. 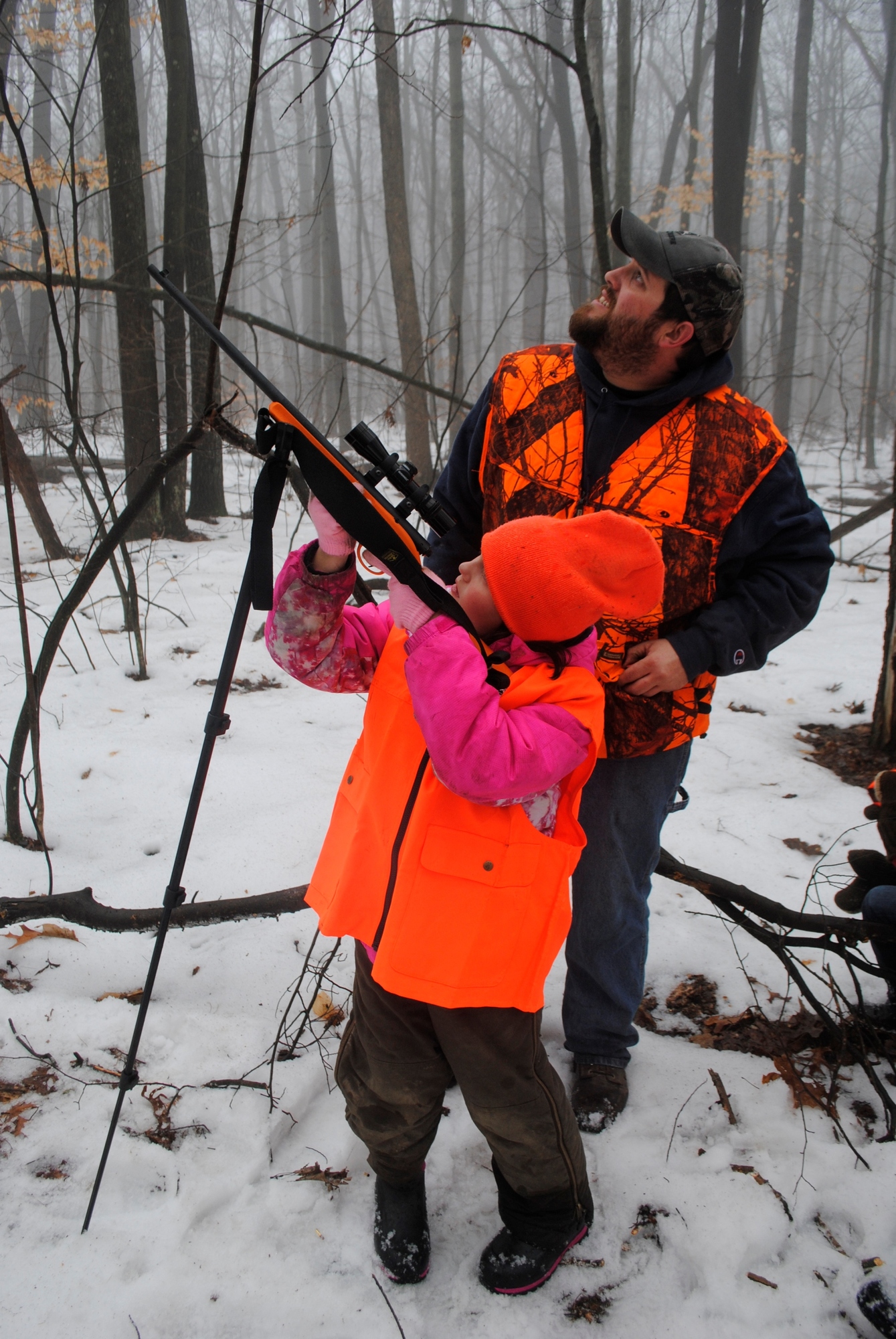 "We're glad to have them," Niewoonder said. "They take out lots of kids. They're super positive and helpful. They're glad to be here and we're glad they're here, too."

Youth hunters, parents and volunteer guides gather at the Belding Sportsman's Club, where breakfast is served - cooked by the club members - and hunting parties are put together based on participants' desires and available volunteers.

"A lot of times there are newbies here - maybe a dad and his kid - who don't really know what they're doing so we try to match them up with guys who have good dogs and are experienced," Niewoonder said. "But a lot of guys just want to go out with their kids and walk around the woods.

"Some guys are here every year. Some just come once in a while. But we get pretty good participation from our volunteers."

New volunteers this year included 41-year-old truck driver Jeff Younts of Holton and 67-year-old retiree Terry Van Haitsma, who came together with their squirrel dogs. The pair came to the event "just to take some kids out," Younts said.

The two men were paired with two youngsters, one who came with his dad, the other who came with mom, dad and other family, to discover the joys of small game hunting.

"I'm not much of a hunter, definitely not rabbits or squirrels," Carlson said. "But we're an outdoor family - we do a lot of fishing and camping - and when Blake started to show an interest in hunting I thought I should support it."

Blake said it was "fun." His dad was even more effusive.

Bill Bird, a 72-year-old retiree, has been volunteering since the hunt started.

"I've got two beagles and if the hunting's good, it's action-packed and a lot of fun, especially for young kids," Bird said. "I just like seeing the young kids out there getting their first rabbit. A whole lot of these kids have never hunted rabbits before and in my generation that's how we started hunting - small game. 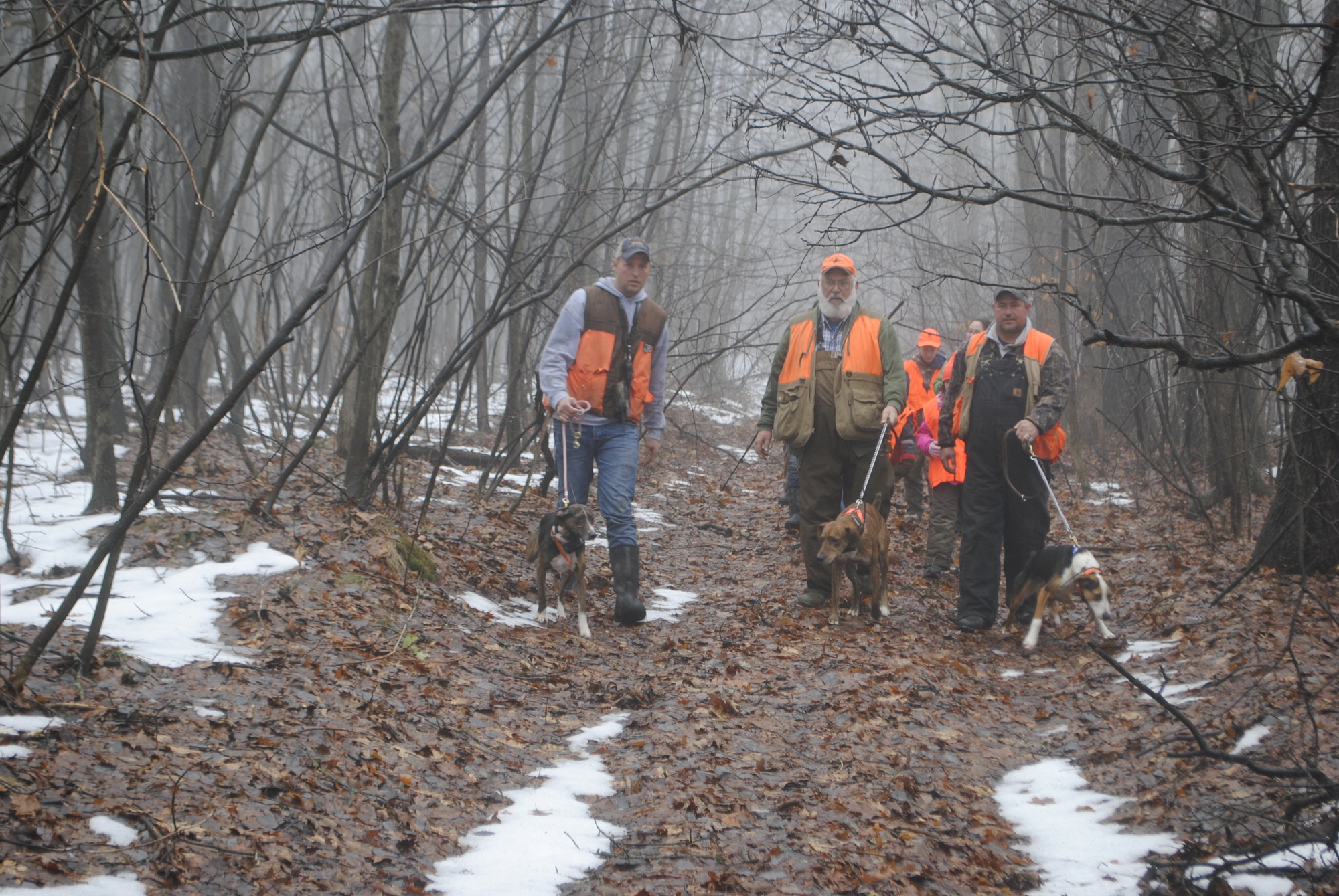 "We didn't have any deer, and we transitioned into deer hunting. Today, the kids start in the reverse of that. There are not a lot of people who small game hunt anymore and the kids don't get a chance to get started in something that I think is a whole lot of fun."

They ran a bunch of rabbits that provided shooting opportunities four times, but only 13-year-old Carson Wagner of Howard City was able to connect. Wagner, who is an experienced deer hunter, killed his first rabbit.

Carson's father Randy, a 48-year-old sales representative, said he saw the hunt on the DNR website and decided it was a good idea.

"We're new to rabbit hunting," he said. "It's the first time for us behind dogs."

Wagner was one of only a handful of youngsters who scored a rabbit.

"The rabbit hunters with beagles all seemed to get on rabbits, but the scenting conditions weren't great and visibility was low because of the lack of snow," Niewoonder said. "There were plenty of rabbits; several groups had some shooting but just missed."

The hunt, which drew nearly 50 youngsters, is sponsored in part by several area sportsmen's' clubs.

Steve Foster of Mid-Michigan United Sportsmen Association (MMUSA), said the consortium of sporting/conservation groups has been donating manpower, prizes and lunch to the annual hunt and plans to continue to do so in the future.

"This has been a great event," Foster said. "We get a lot of repeats but we keep getting new people, too, from as far away as Kalamazoo. All of our groups are very glad to be involved in this. The stats are starting to show that's there an increase in hunting and it's youth and women who are accounting for it." 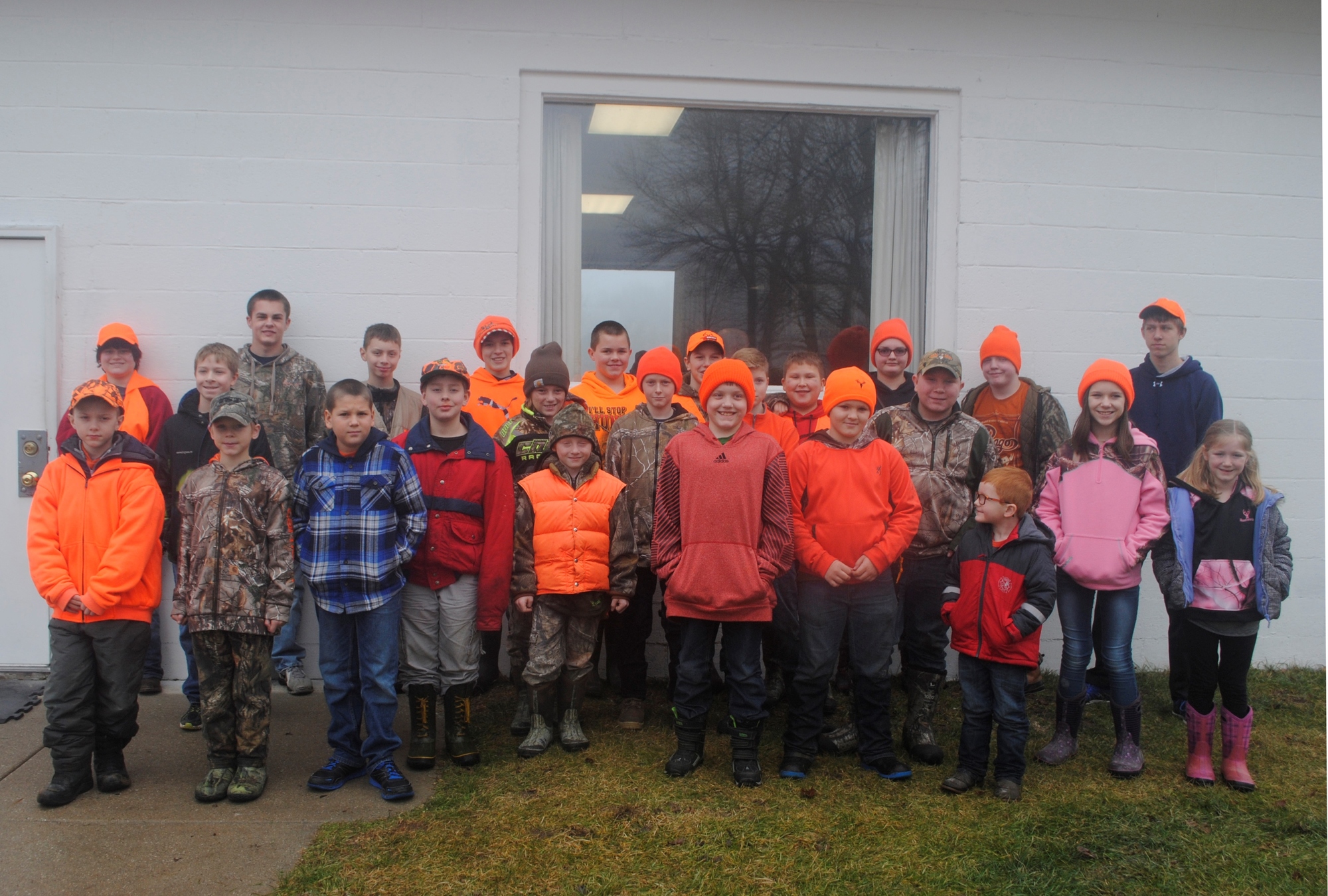 The association donated a .22 rifle for a door prize. So did the Montcalm County Quality Deer Management Association, which is an MMUSA affiliate. The squirrel dog association donated a shotgun/rifle combo. And the local National Wild Turkey Federation chapter donated pocket knives for all the youngsters.

John Byrne, a metal fabricator and president (and lifelong member) of the Belding Sportsman's Club, said his crew intends to continue hosting the annual event.

"It's fun getting more youth out there in the woods and making sure we have a future for hunters," he said. "It's very important to get the youth involved and the safety portion is emphasized. It's one of those things that we've got to do.

"We have kids here who are too young to be handling a firearm, but it's getting them ready for the next few years when they'll be old enough to start."

Byrne said the 75-year-old club now has as many participants as it can handle, but he likes what he's seen.

"A lot of moms come out and go with them (youth hunters) and that's a very good thing," Byrne said. "A lot of kids don't have fathers and their mothers have taken on a good role, getting the kids away from iPads and cellphones, and getting them in the woods."

For more information on hunting, visit the DNR website at www.michigan.gov/hunting.