There are numerous occasions when Michigan Department of Natural Resources divisions work together to perform a good number of tasks, but this cooperation is often unknown to the general public.

Recently, in the Upper Peninsula, an especially great deal of cooperation was in evidence between several DNR divisions, as well as outside entities, called to respond to the impacts of two vicious storm systems that struck the western part of the region over a 10-day period.

"Spectacular work was done by our DNR staff and outside crews who worked to put our parks back together after the damage caused by Mother Nature," said Ron Olson, chief of the DNR Parks and Recreation Division. "We appreciated the patience of the public and the public valued the quick response to this emergency." 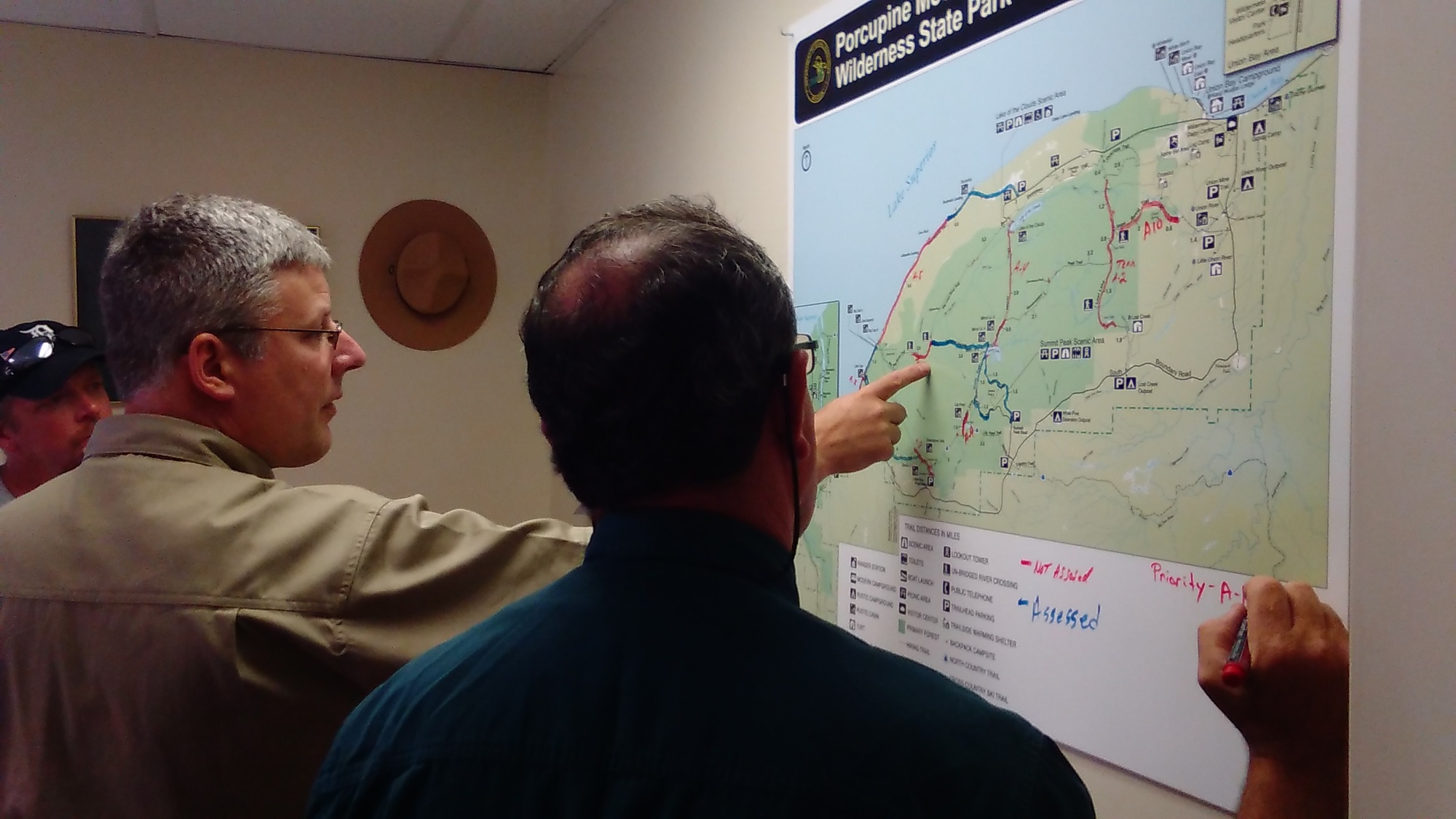 On the night of July 11, 2016, a tremendous storm - some analysts would later say it was the worst in 1,000 years - moved east from the Saxon Harbor area of Iron County, Wisconsin toward Porcupine Mountains Wilderness State Park.

The storm dumped up to 11 inches of rain, in just four hours, causing flooding that washed out a campground and much of the marina at Saxon Harbor, damaging dozens of boats, sweeping camping vehicles into Oronto Creek, and turning Lake Superior into muddy, brown slurry.

Montreal (Wisconsin) Fire Department assistant chief Mitch Koski died responding to the emergency. His vehicle was washed into the harbor where he drowned.

Roadways were eaten away, flooded over and shut down. Trees toppled from along the riverbank and were washed, with boats and other debris, miles out into Lake Superior.

As the storm continued east, across the state line into Michigan, the rainfall eased, but the storm still packed plenty of punch.

The National Weather Service confirmed an EF1 tornado struck three miles south of Bessemer. Damage included a roof that was torn from an old ice rink and dumped into the rim of Sunday Lake. 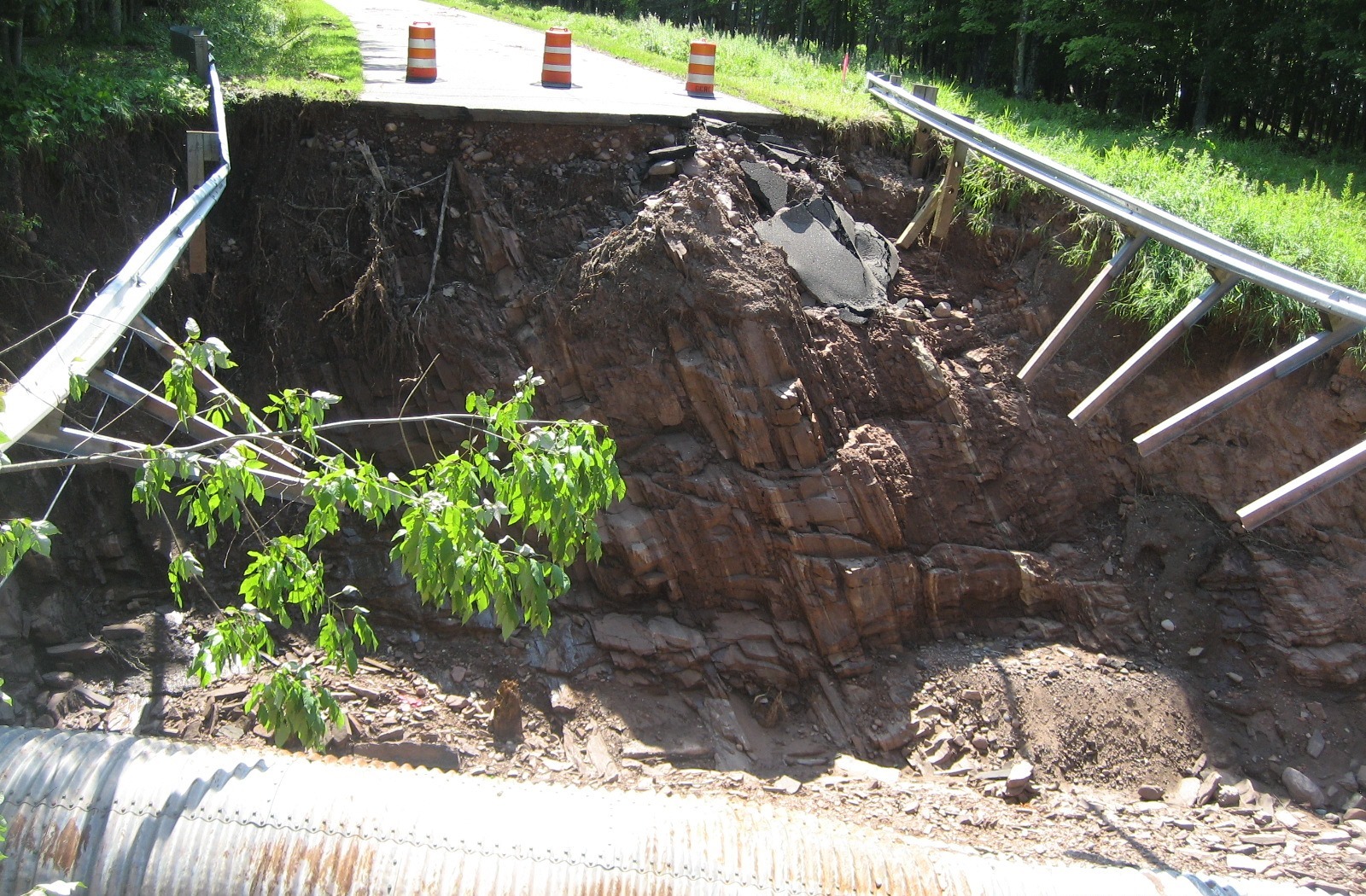 Heavy, concrete barriers (called beach prisms) set along the creek to trap sand were dragged into the stream by the raging floodwaters. In the days ahead, the U.S. Coast Guard would report a debris field slowly floating east in Lake Superior, presenting a potential hazard to boaters and swimmers.

Not far to the east of Oman Creek, in the Presque Isle River area at Porcupine Mountains Wilderness State Park, flash flooding undercut the banks along a tiny rivulet, dropping numerous trees into a ravine.

The erosion would force permanent closure of one site on the Presque Isle Campground loop. A trail leading from the campground to Lake Superior was shut down temporarily until toppled trees and mud could be removed.

Throughout the western section of Michigan's largest state park, small creeks rose well beyond their banks, repeating dramatic scenes similar to those evidenced at the Presque Isle campground.

Backcountry trails and cabins were closed. Bridges were damaged or washed out. A cabin alongside Speaker's Creek had to be moved after floodwaters carved off sections of the sandy streambank.

Park staff feared continued erosion would undermine the foundation of the cabin. 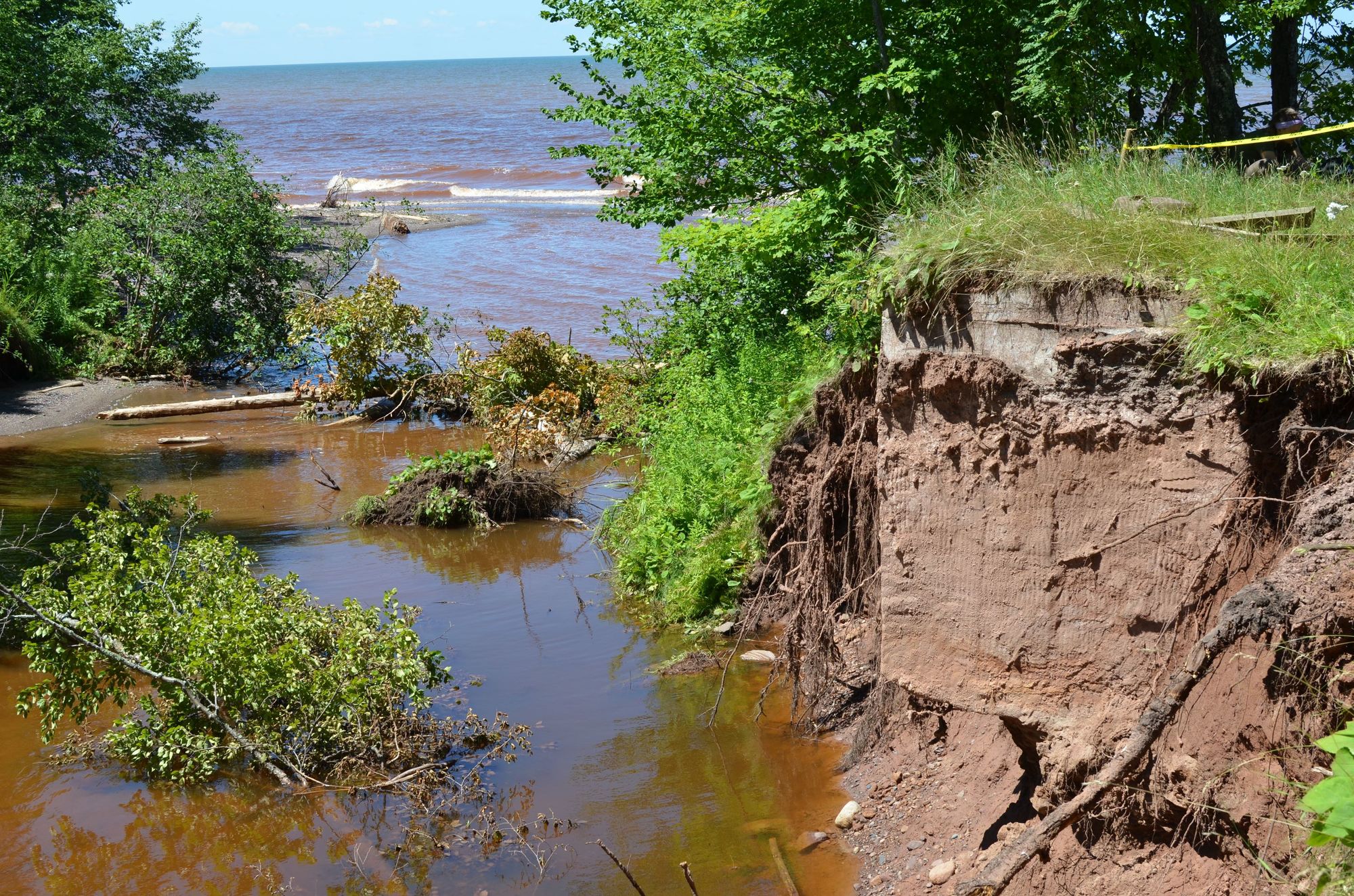 In response to the damage, which occurred during the height of the summer camping season, the DNR put an incident management team in place to organize cleanup in the aftermath of the crippling storm.

"There was DNR staff from six divisions involved in this," said Doug Rich, western U.P. district supervisor for the DNR's Parks and Recreation Division. "Everyone pitched in and did a fantastic job."

Those DNR divisions responding to the incident included Parks and Recreation, Forest Resources, Law Enforcement, Executive, Marketing and Outreach and Finance and Operations.

DNR personnel from the Forest Resources Division set up an incident command center at the state park. Many of the staff involved in the response was working outside the center.

With chainsaws over their shoulders and hardhats on their heads, crews headed into the forest to begin the massive task of clearing trees, repairing boardwalks and reducing trail hazards.

"Because of the remoteness of trails at the park, crews had to be transported to some areas by boat," said Don Mankee, district supervisor of the west U.P. for the DNR's Forest Resources Division. "With the dense piles of intertwined fallen trees, crews averaged 100 feet of trail clearing in six hours." 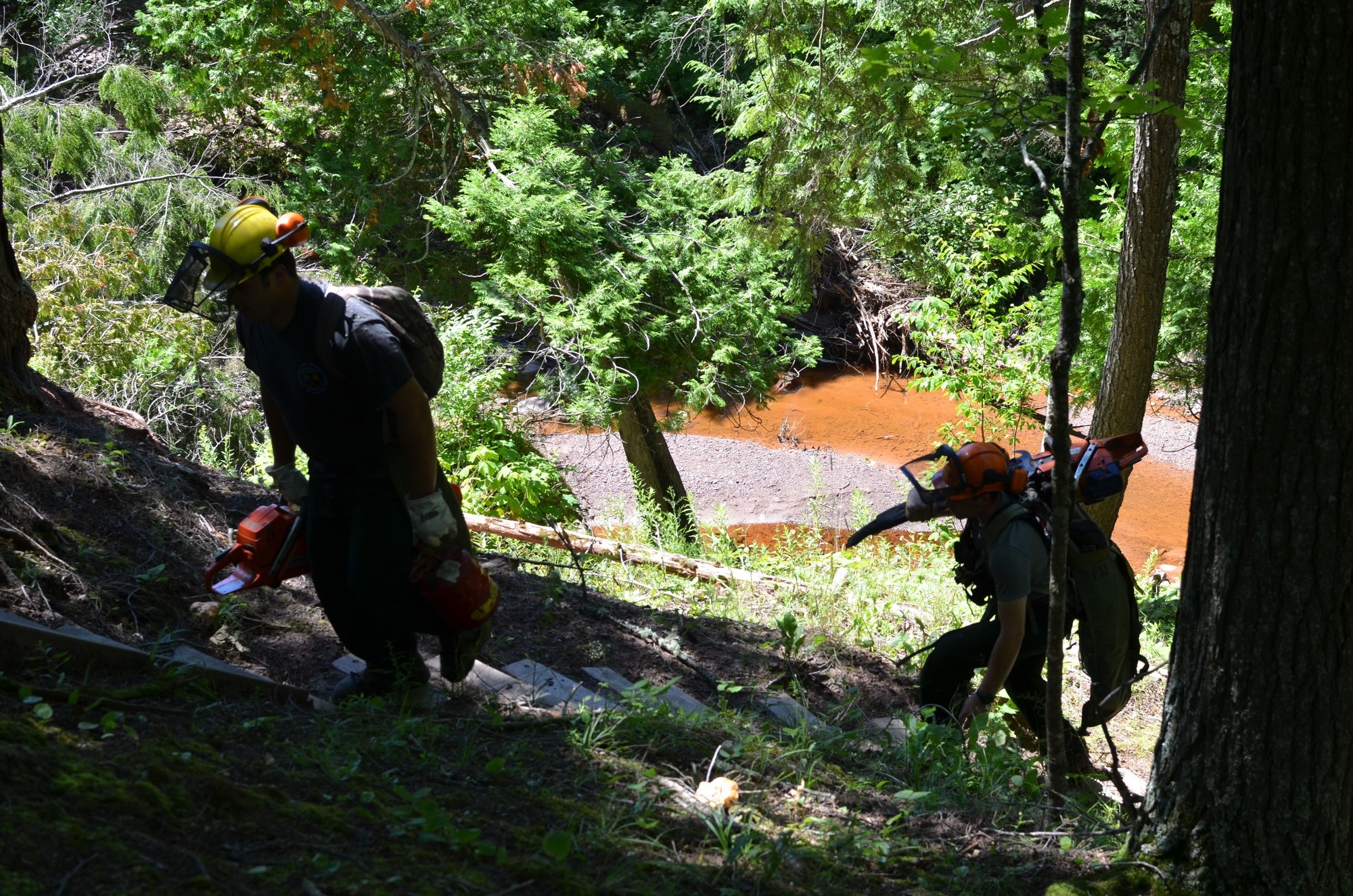 Prison crews of eight men and a supervisor helped DNR Forest Resource Division workers clear the trails. As a result, a great deal of progress was made. Backcountry cabins and campsites that had been closed were reopened two days ahead of schedule.

Ten days after the violent storm hit the west end of the park, a complex of thunderstorms slashed through the eastern half.

The National Weather Service office in Negaunee Township confirmed pockets of significant tree damage from Ontonagon east toward Baraga. The roof of a yurt was blown off at Union Bay.

Those strong winds pushed trees onto power lines, knocking out utility service for more than 20,000 customers, including several of the state parks in the western Upper Peninsula - Twin Lakes and the Porcupine Mountains included.

At Emily Lake, falling trees slashed through the shells of two travel campers at the park. Campers escaped miraculously, without injury. Four of the nine campsites were occupied during the heavy thunderstorms.

Because of the extensive number of fallen trees, DNR staff called in a professional sawyer crew from J.M. Longyear LLC of Marquette to clear safety hazards at the campground, including leaning trees and dangling overhead branches. 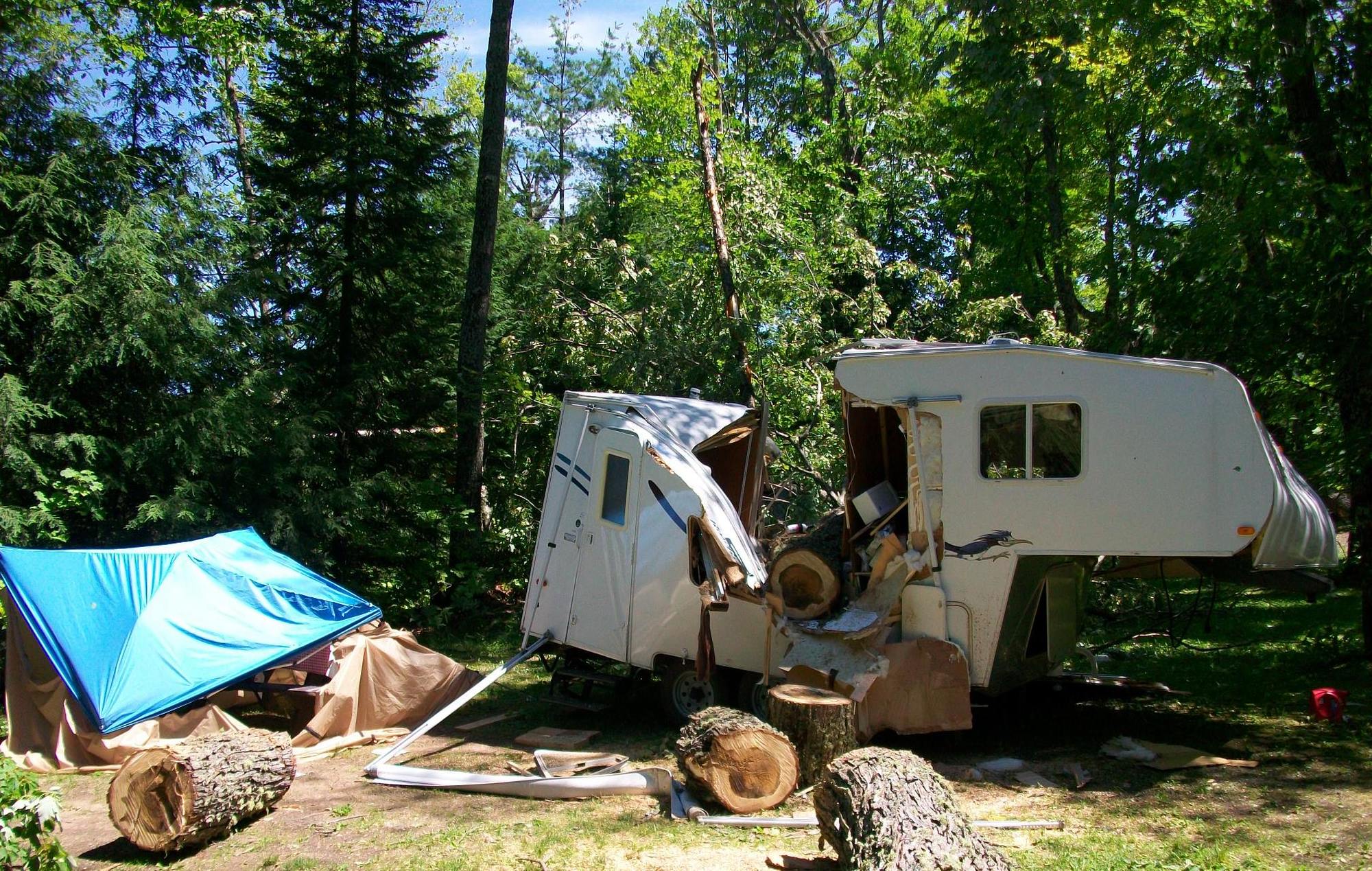 "After the loggers have gone through with their heavy equipment, almost all of the sites have at least some damage," Rich Pirhonen, ranger at Twin Lakes State Park, said at the time. "Some need backhoe work, stumping, brush removal, grading and leveling et cetera."

Along with the campground, loggers also cleaned up roughly 15 acres around the boating access site area and along Pike Lake Road.

"This type of cooperation is something DNR divisions are well-equipped to deliver," said Bill O'Neill, chief of the DNR's Forest Resources Division. "When something like this happens, we are able to pull together, along with local crews and representatives, to produce and effective response."

In August, a similar cooperative effort was required of the DNR for damage from a violent thunderstorm in the northern Lower Peninsula. The areas hardest hit there included Keith J. Charters Traverse City State Park, VASA Pathway and state forest campgrounds and trails along M-72, from Grand Traverse to Crawford counties.

Get more information on Michigan state parks at www.michigan.gov/stateparks.

Accompanying photos and suggested captions are available below for download and media use. Credit: Michigan Department of Natural Resources, unless otherwise noted.

Camper.jpg: Tree-fall storm damage to one of two travel campers at the Emily Lake State Forest Campground in Houghton County. No injuries were reported.

Crewmen.JPG: Members of a Michigan Department of Natural Resources crew ascends a flight of stairs, with chainsaws in hand, at Porcupine Mountains Wilderness State Park.

Mouth.JPG: Uprooted trees are shown in the water at the mouth of Speaker's Creek, along with a section of the stream bank that eroded during storm flooding, undermining an embankment where Speaker's Cabin stood.

Pavement.JPG: A section of Lake Road at Maki Creek that didn't wash out, but had flows over the road, as evidenced by the debris stuck in the guard rail. With the stream channel down in the valley bottom, flood stages or water backup of higher than 40 feet were present at the location. (Michigan Department of Environmental Quality photo)

Ravine.JPG: Erosion and fallen trees are shown from a deep ravine alongside campsite No. 36 at the Presque Isle Campground at Porcupine Mountains Wilderness State Park. The campsite has been closed permanently.

Washout.JPG: A washout of Lake Road at the crossing of Flint Creek. (Michigan Department of Environmental Quality photo)