It has been reasonably common in America, over generations, for youngsters to follow in the same career footsteps as their parents.

How many Fondas or Barrymores are there in Hollywood? How many small businesses have “& Son” stenciled on their windows?

Natural resources professionals are not immune. It’s not unusual for boys or girls who see one, or both, of their parents working in conservation to decide they’d like to do the same thing.

The Michigan Department of Natural Resources has plenty of second- and even third-generation representatives of families who have followed the family tradition. And for the most part, they had to fight their way in – working for other agencies, often in other states – before they joined the DNR.

“I think they see the lifestyle – the conservation community and the cool things their parents got to work on – and it breeds the interest,” said Scott Whitcomb, unit manager for the Pigeon River Country State Forest in the DNR’s Forest Resources Division. “A lot of DNR people have gone that route.”

Whitcomb, whose father, Doug, was a long-time wildlife biologist with the DNR, studied wildlife management and forestry in college. He went to work in Virginia after graduate school, but moved back to Michigan when a wildlife position came open. 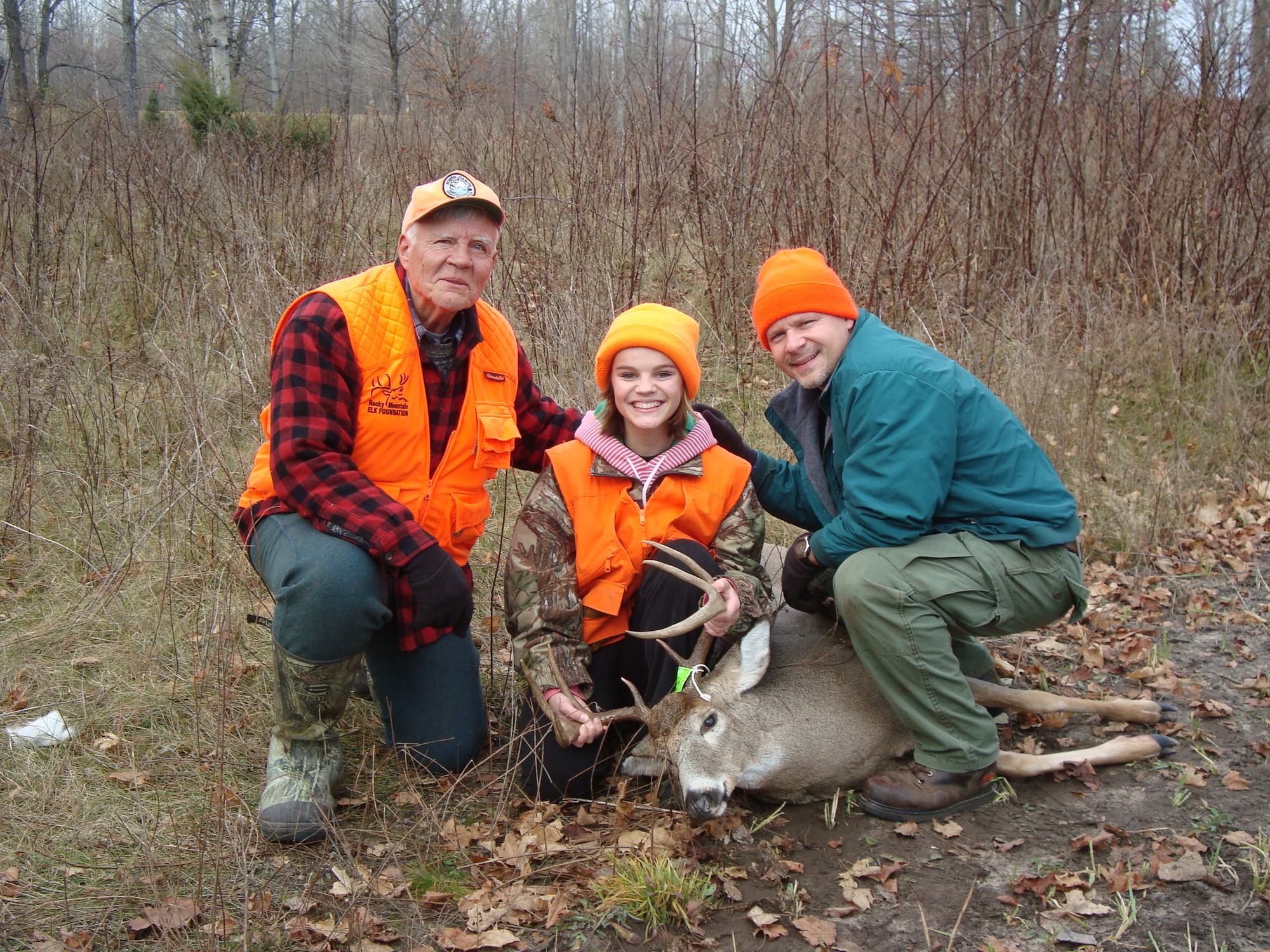 He worked in Lansing until he had the opportunity to transfer to the Forest Resources Division and go back to Pigeon River Country, where he grew up.

“You learn what you’ve been taught, and if you’re taught to value the outdoors and wild places and hunting and fishing traditions, those are things you want to do yourself,” Whitcomb said. “I remember coming home from basketball practice and my father telling me to go out and look in the bed of the truck.

“And seeing it was full of crates of pine martens that were going to be released the next morning in the Pigeon River Country, and (I was) thinking to myself, ‘This is real cool.’”

Whitcomb said that when he went into wildlife management, his father warned him that jobs were hard to come by.

“I always thought there would be always some people who get hired, and I wanted to be one of those persons,” Whitcomb said. “My father always gave me the impression that it was a good job with good people in a good organization and that he always appreciated his job. “

DNR wildlife pathologist Tom Cooley followed his father into biology, and then led his son into it, too.

Marv Cooley, Tom’s father, was a wildlife biologist who worked at DNR research centers, became an administrator in Lansing and eventually took over responsibility for all the state land in southern Michigan. He retired 32 years ago, after 44 years of service. 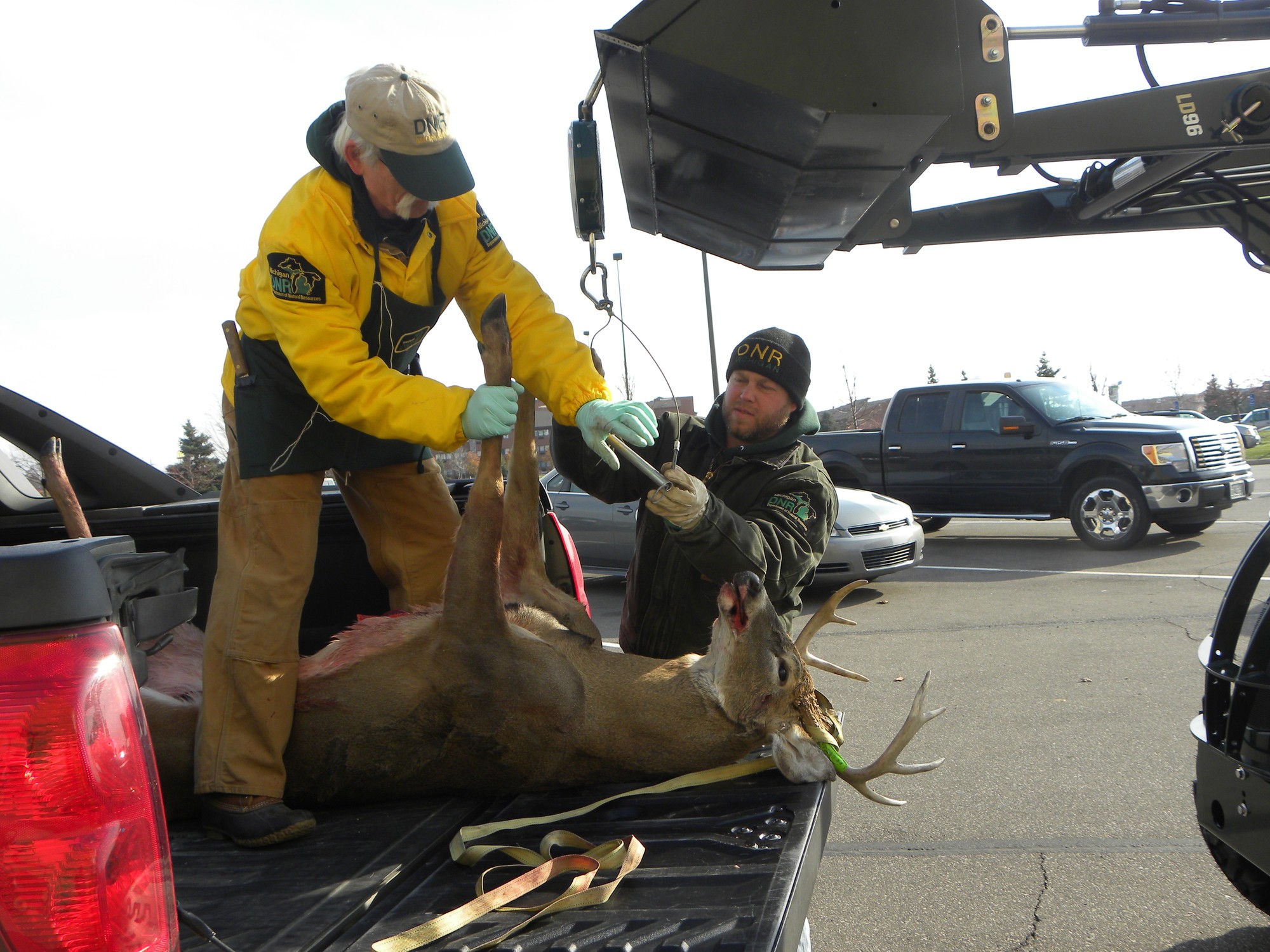 Like Whitcomb’s father, Marv Cooley warned his son that it might not be easy getting a job at the DNR.

“He was honest about how difficult a field this was to get a job in, but I was certain it’s what I wanted to do,” Tom said. “I went in a different direction by going into wildlife disease instead of management – which made it even more difficult – but I worked in the lab as a student assistant, and as a laborer, before I got my master’s and then I was hired permanently in 1979.”

Tom’s son, Zach, hired in as a wildlife technician nine years ago, and is now the wildlife biologist at Pointe Mouillee State Game Area in Monroe County.

Zach said his father warned him about the difficulties of pursuing a career in wildlife management, but he believes his father is pleased that the youngster ignored him. Tom acknowledges as much.

“Zach has gone back into the habitat part of it, like my father, and we’re very pleased,” Tom said. “Our kids never knew anything but this line of work. I grew up around wildlife and so did my kids. It was not an unnatural direction for him to go.”

Tom’s other son, Zeke, is in wildlife management, too, in the private sector in California.

“We will have 100 years as a family working in the (DNR) Wildlife Division, four years from August,” Tom said. “We are really proud of that.”

For his part, Zach – who worked for the Soil Conservation Service before he hired on at the DNR – said working for the department is everything he thought it would be. He said he won’t be surprised if one of his four youngsters wind up at the DNR, too.

“It’s already what they want to do,” he said. “They enjoy coming to work days at the game area for wood duck box clean-out and the waterfowl festival. I’ll tell them it’s not easy, it takes a lot of time, but it’s worth it if that’s what you want to do.

“And it’s something to live up to. My grandpa has an award named after him that’s given out annually for outstanding dedication to the (DNR) Wildlife Division. My dad’s already won it (in 2008) so it’s something you think about in everything you do.”

Not all intergenerational DNR employees follow in the same discipline as their parents. 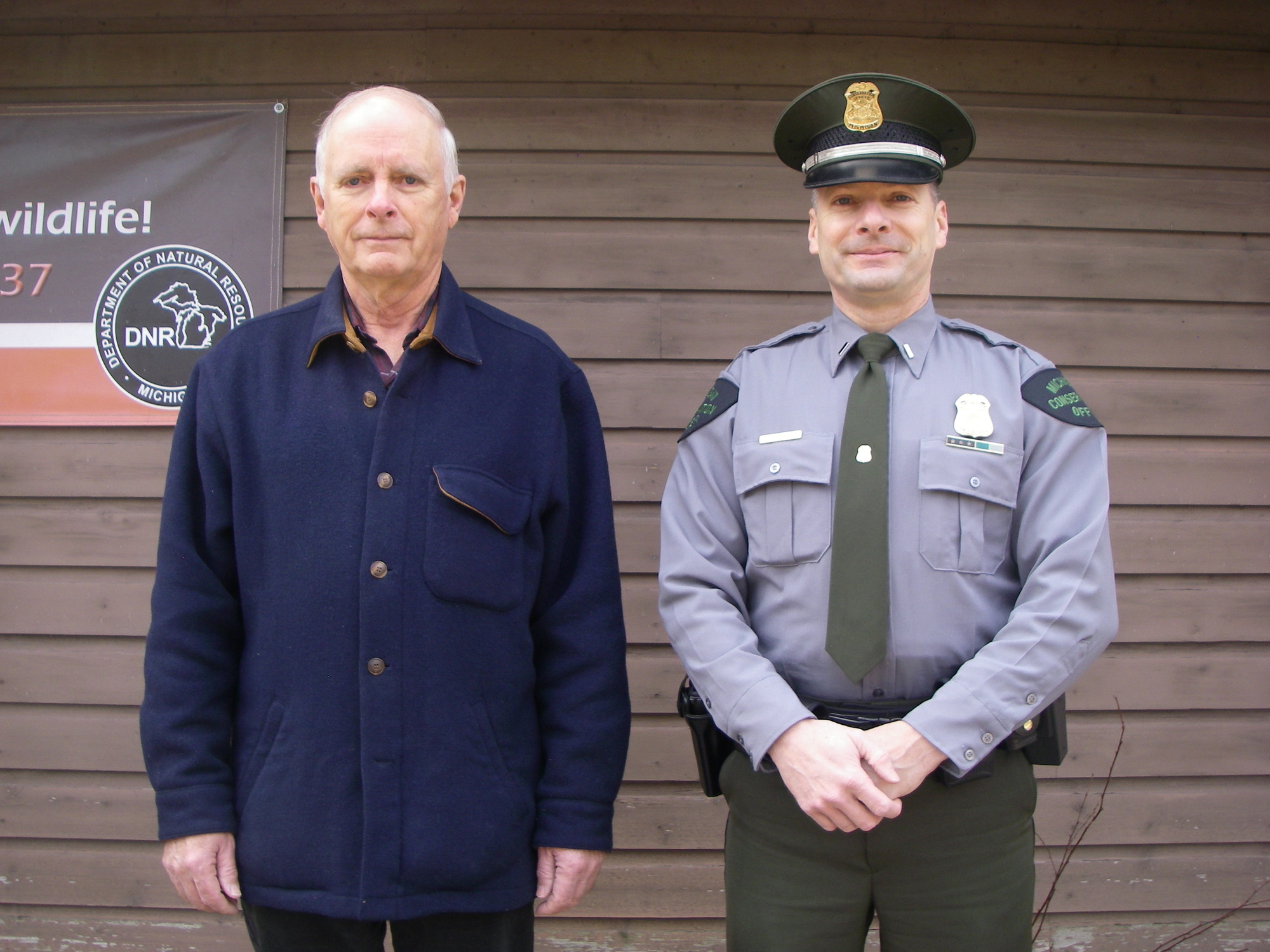 Lt. Terry Short, a third-generation DNR employee, is the first in his family to go into law enforcement.

In 1950, his grandfather, Frank started working in both the DNR Fisheries Division and Parks and Recreation Division, retiring as park supervisor at Twin Lakes State Park. His father, also named Frank, started in Parks, worked in the old Fire Division and ultimately retired from Wildlife Division. During his career, he also worked on temporary assignments with Forestry, Law and Engineering.

And for his part, Short said he might have wound up in another division besides Law Enforcement, too.

“The only thing I ever really knew was growing up in the DNR family,” Short said. “It’s all I ever wanted to do, to work for the department. I just didn’t know which division.”

Short studied fish and wildlife management at Northern Michigan University in Marquette, was a seasonal employee for Wildlife Division between terms, and was in graduate school when the DNR called.

“I was hired, shipped off to the academy, and haven’t looked back,” Short said. “Ironically, I was set for an interview with Forest Management Division about a week after I was hired by Law. I would have been happy in any division, but law is really where I wanted to go.”

Just like his father and grandfather, Short has spent his entire career in the Upper Peninsula, but unlike them, he has not had to move.

He started his career as a conservation officer in Menominee County, working in that position for 12 years until he was promoted to a specialist in the Great Lakes Enforcement Unit, working in commercial fishing enforcement.

After several years in that position, he was promoted to the unit supervisor in the Law Enforcement Division, a far different experience than his dad’s.

He was hired at Tahquamenon Falls State Park as a trades helper, was laid off and went to work at Twin Lakes State Park for seven weeks in engineering, helping build the headquarters building.

Then he went back to the Porcupine Mountains to operate the ski lift, returning to Tahquamenon Falls State Park briefly, until a full-time position opened in Marquette in the Fire Division, where he became a fire tower man. 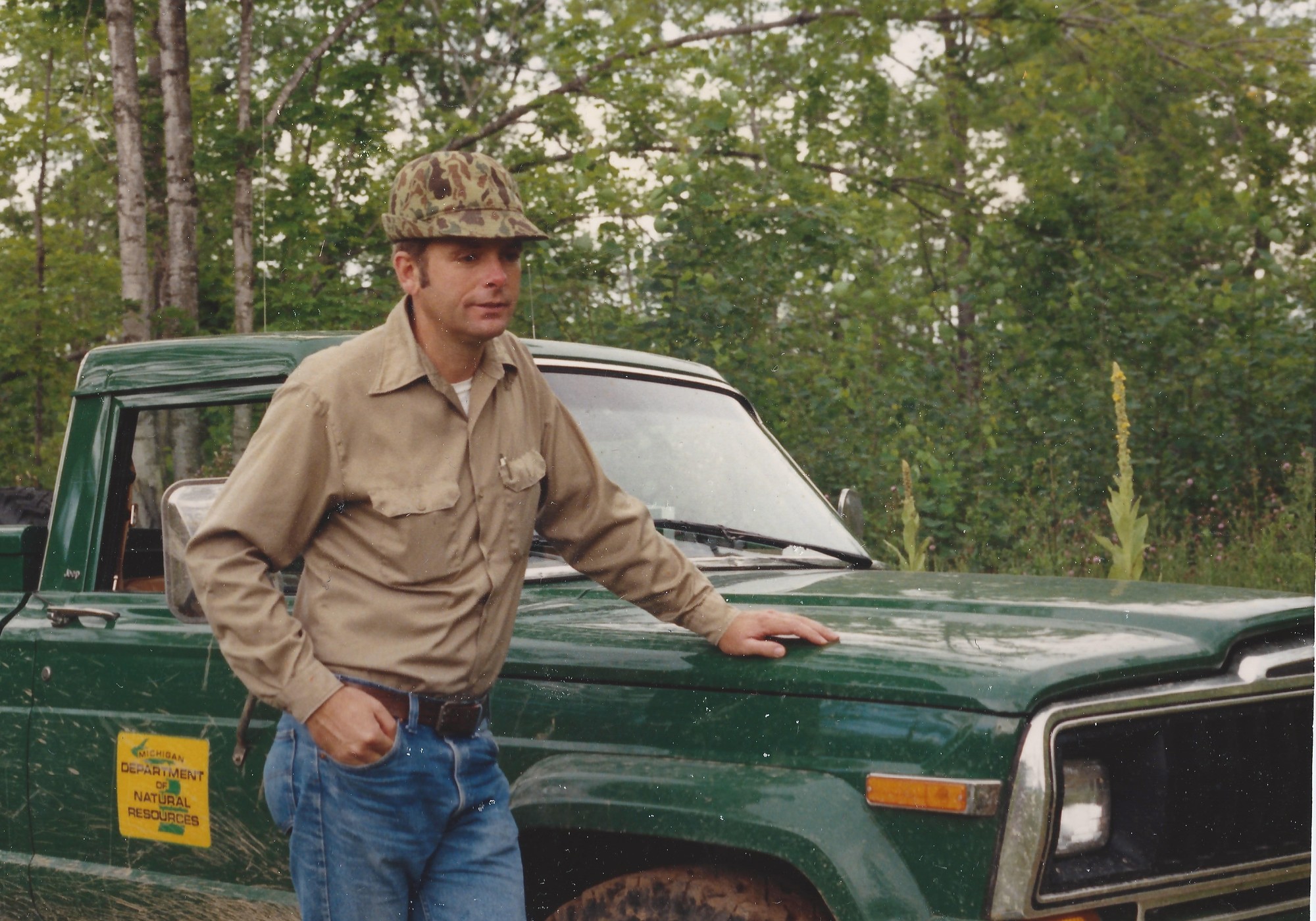 Before he retired, he worked as a radio operator in public information for District 3 (Escanaba), and ultimately became a wildlife technician at Felch and then Escanaba.

Short is very appreciative of the opportunity to stay in Menominee, where he started.

“It’s very rare to stay in one spot and have those opportunities present themselves,” he said. “It was neat to get into the department while my father was still working there. There are challenges trying to get into the same department that your family members are in – you don’t want people jumping to conclusions. You want to enjoy your own achievements, get there by your own accomplishments.”

Short will be eligible for retirement soon, but his father says he can’t go just yet.

“I let the kids choose whatever they wanted, but I don’t think he had to be pushed,” Frank said. “But I tell my son if he stays another 10 years, we’ll have 100 years of service to the department.”

And there may be more, too, Terry says.

“My 10-year-old, all he wants to do is work for this department – become a conservation officer,” he said. “It’s a great job in law enforcement.”

Cooley-1: Tom and Zach Cooley working to get a white-tailed deer out of a truck bed. (Photo courtesy of Tom Cooley)

Short-2: Frank Short is shown in a photo from his work with the Michigan Department of Natural Resources during the 1980s. (Photo courtesy Terry Short)