At first glance, the errant flight of an arrow poorly aimed, falling to the grass, might not seem like much to see.

That is, of course, unless that arrow is followed by a child.

Then, as she reaches to pick it up, there's a whole world to look at all at once - promise, hope, determination, reflection, focus, wonder and fascination.

Today, it may be only one of many arrows shot poorly at a target on the backyard fence.

Someday, she may shoot a rocket past the stars.

Indeed, the sky is no limit to what might one day be accomplished given the important skills acquired in these early, simple days of archers, arrows and bows.

Just watch and listen to the small group of fifth-grade kids at Cherry Creek Elementary School, south of Marquette, who was recently introduced to target archery by a couple of teachers and a national program supported by the Michigan Department of Natural Resources.

"The hardest part is sometimes the pulling back, because your fingers get tired after awhile and it's pretty heavy, so you just keep building up your arm strength to be able to pull it back," said Natalie Deneau, a determined 10-year-old Cherry Creek student from Sands Township.

This day - at the class' final shooting event in the school gymnasium - was special.

"I've done really well," Deneau said. "It's probably my best out of all the other days."

Across Michigan, more than 500 schools have adopted the National Archery in the Schools program. Cherry Creek Elementary is among the most recent.

Throughout the country, millions of kids, from fourth-graders to high school seniors, have participated safely in the program.

"I like to shoot a bow. I have a bow at home, but I'm not really that good at it so I just wanted to see if I get better and I have," said Max Reese, 11, of Harvey. "I did improve by a lot. Before, like when I shot on my deer target, I'd usually shoot the leg. Only once I shot it in the heart. Now, I'm shooting tens." 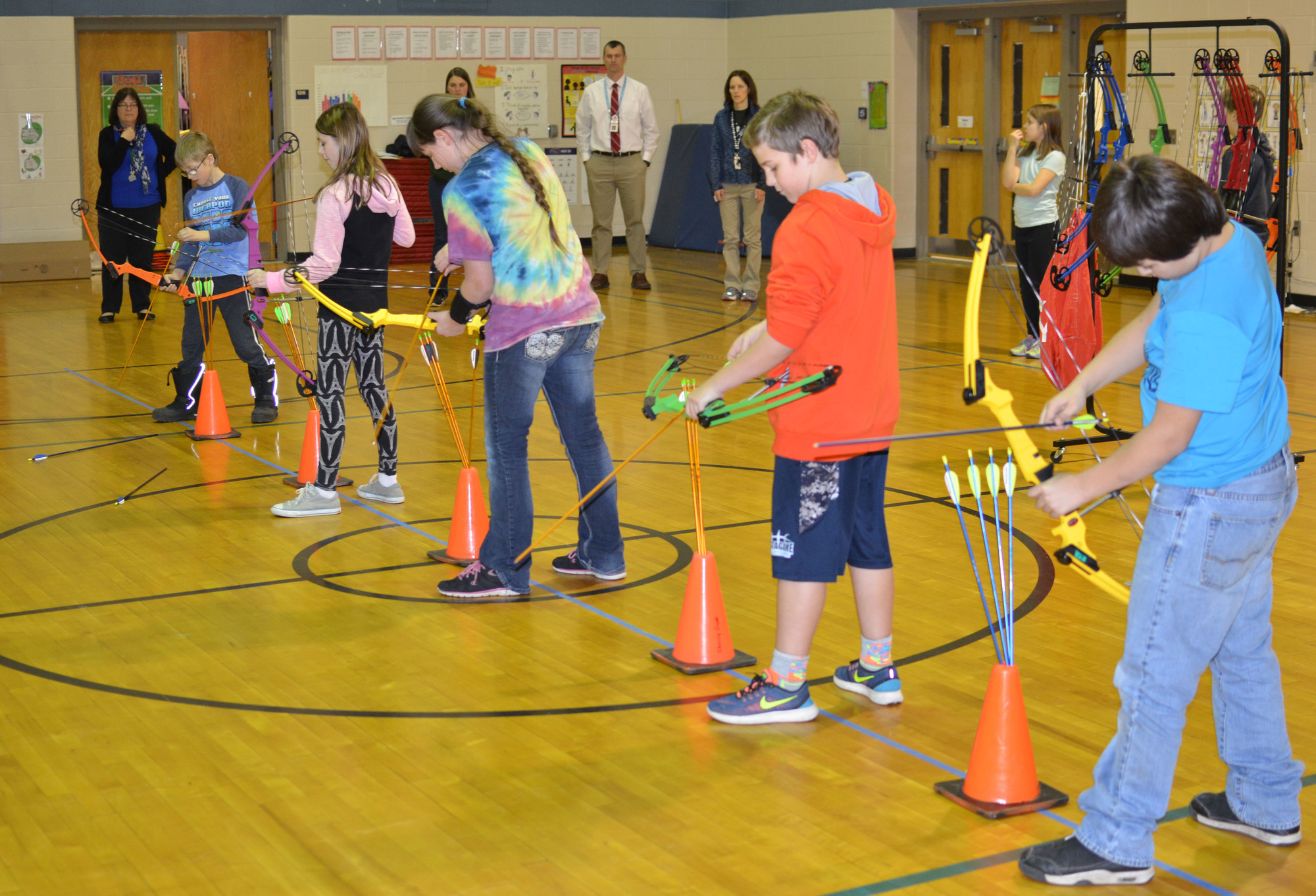 Sporting goods manufacturers Easton and Genesis generously provide archery equipment to schools at half the cost of retail to aid the program. In the case of Cherry Creek, U.P. Whitetails of Marquette County funded half of the $2,700 total equipment cost, the DNR financed the rest.

"U.P. Whitetails of Marquette County is very interested in youth recruitment in hunting and the shooting sports," said George Lindquist, a trustee with the organization. "We are happy to partner with Cherry Creek school and the DNR to help make this program happen, and give these students some hands-on learning that will stick with them, whether they take up hunting or not. The young people today will be the wildlife managers of tomorrow."

Reese said his dad has gone elk hunting with friends in Montana. Reese hopes he will one day get to bow hunt alongside his father.

Deneau said she's had some experience shooting at a target posted on a hay bale in her grandfather's yard.

"I did archery since I was about 7, my grandpa was teaching me for a little bit," she said. "And then, I found that we had this at my school and I really wanted to join it. And so I did."

Deneau said she'd like to continue with the school archery program.

"It's really fun," she said. "We get our own assigned bows and we get to do it with our friends. I really want to be in a competition someday."

Hundreds of students have participated in Michigan's statewide archery tournament for kids in the National Archery in the Schools Program.

From the nock to the bow, hand set to the anchor, aim, release and follow-through, the students at Cherry Creek were taught 11 steps to successful and safe target archery.

Deneau said her grandfather had taught her some of the steps. 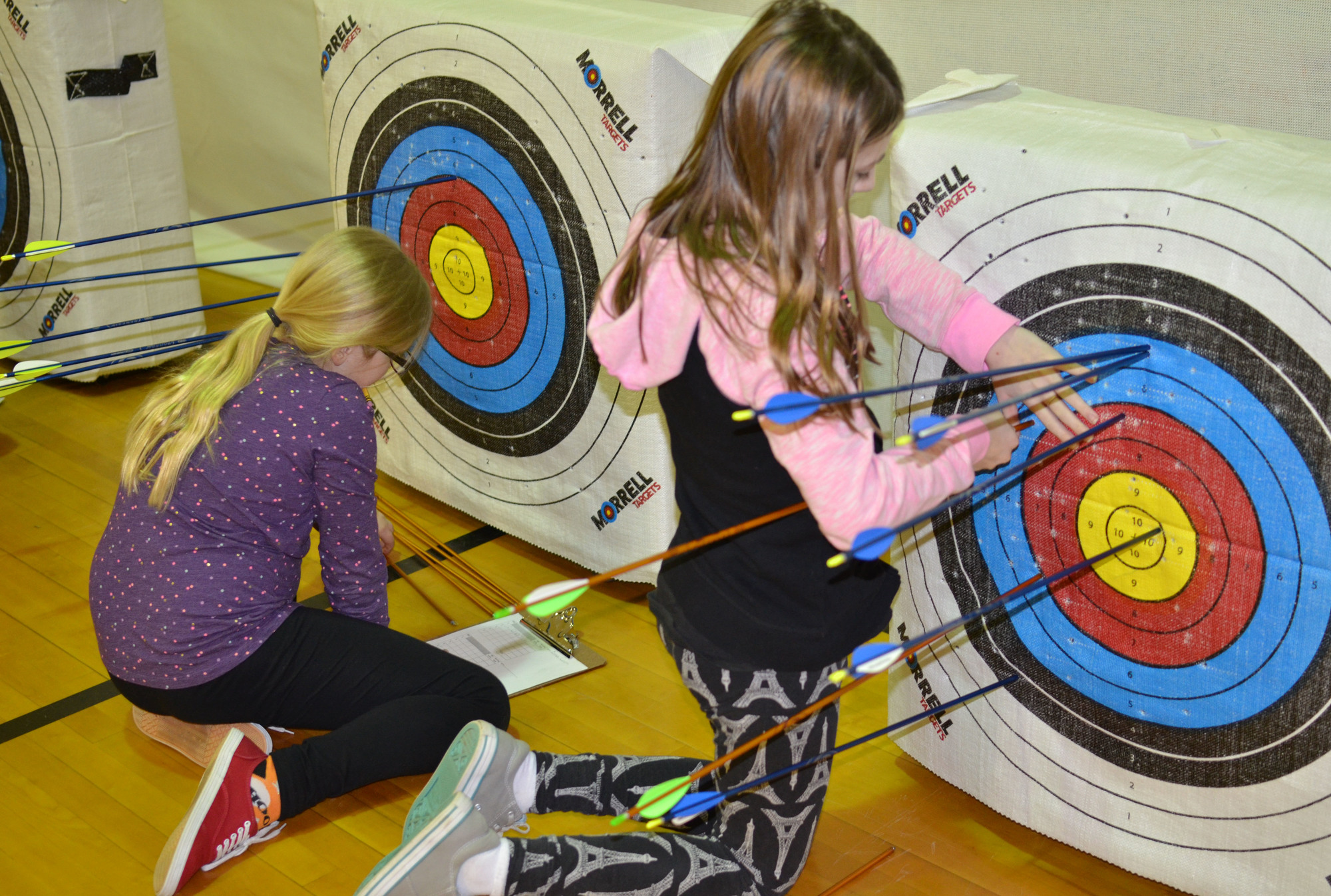 "Some of them I've never heard of before," she said.

"Before, I didn't know that you had to have a stance," he said, demonstrating how he used to stand. "It makes it so much easier."

At a one-day session, the DNR trained teachers Kathryn Weycker and Mary Bengry to teach archery to the kids at the school. The teachers then offered four sessions over a two-week period as an introduction, teaching a basic idea of what archery is, safety, form and what happens on an archery range.

"Just kind of give them maybe a taste of what it is, maybe spark their interest in something, so that going forward they have another form of physical activity that they can engage in other than just basketball or football, because for some kids, that doesn't interest them and they don't want to be part of those team sports," Weycker said. "I am constantly trying to find new ways to engage kids."

Bengry said she had heard about the National Archery in the Schools program a while back and began asking school Principal Travis Smith if Cherry Creek could offer it. Smith had recently heard about the program himself from a DNR staffer.

Bengry asked Weycker, the physical education instructor, whether she would be interested in training with her to teach kids archery.

She said students learned teamwork, while incorporating disciplines from their other studies, including math, science and physics. 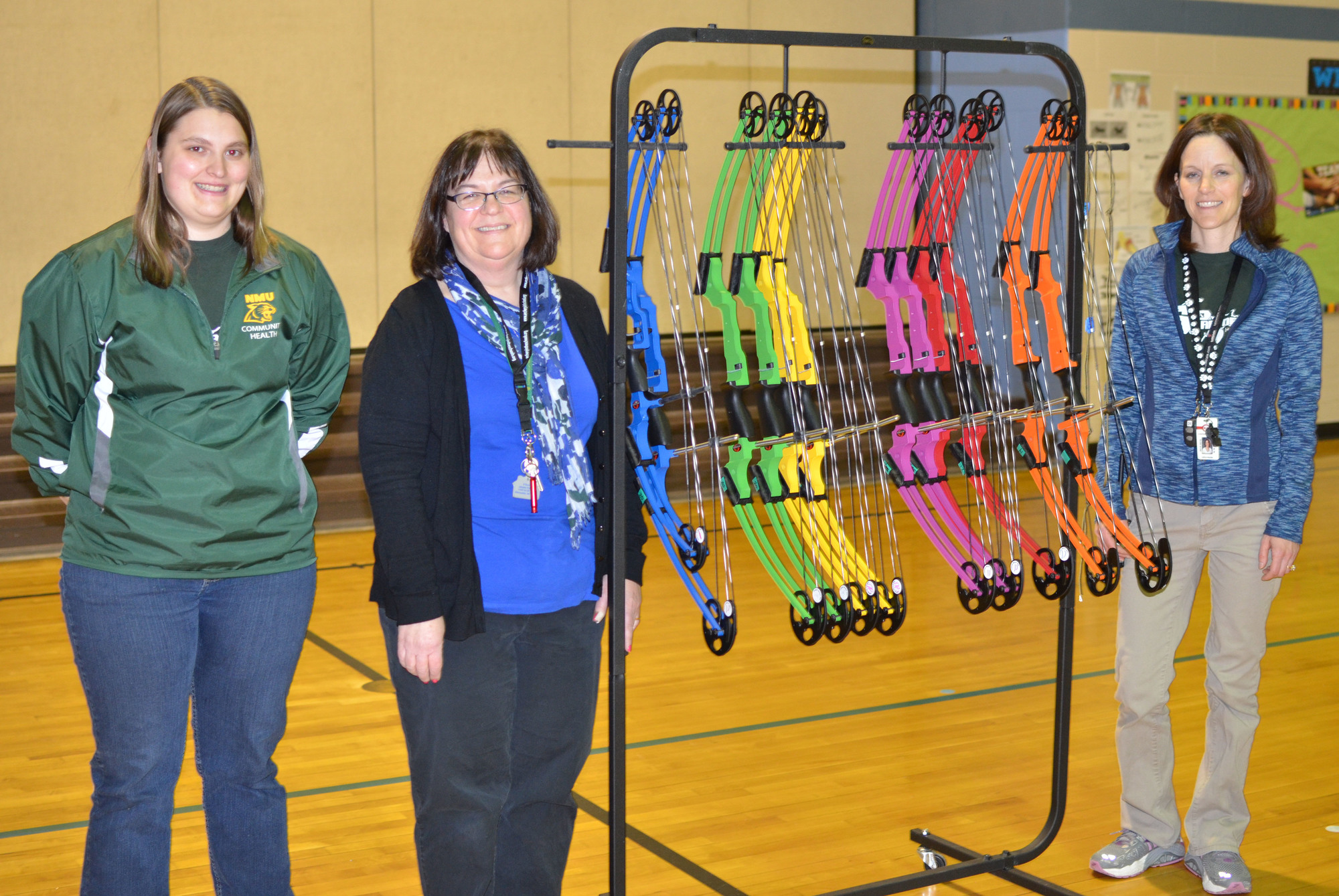 "I really didn't know what to expect. The first day we were both a nervous wreck. But, they have been amazing," Bengry said. "They're patient and they listen and they follow the directions and it's just been a lot of fun to watch them develop just over the course of the few times we've done it."

The class had a range of experience, with students who knew most helping beginners. Kids enrolled were split about evenly between boys and girls.

Casey DeVooght, a senior from Marquette at Northern Michigan University studying community health, had been shadowing Weycker, thinking about getting into physical education instruction.

She turned out to be a big help with the archery program.

"My cousin (Simon Goodwin, one of the students) shoots. I shot in high school and I hunt all the time. So, I have a lot of archery experience," she said. "We did it my junior and senior year in high school.

"Just to get the kids active in it, it's a lifelong skill that they can always use. It's so awesome and it keeps them active, and that's what I'm all about is getting kids active, and it teaches them something that they might not be used to."

The archery program is offered during the school day to provide all students with an opportunity to experience target archery. Active National Archery in the Schools Program schools also can offer it as an afterschool activity.

Smith said afterschool activities are considered by many to be the "other half of education," as these programs can be a staple of a student's educational experience.

"However, these opportunities are typically limited at the elementary level," Smith said. "Cherry Creek Elementary School recognizes the importance of afterschool activities and extends to students a series of programs that range from two to six weeks, to those programs that run for the entire school year." 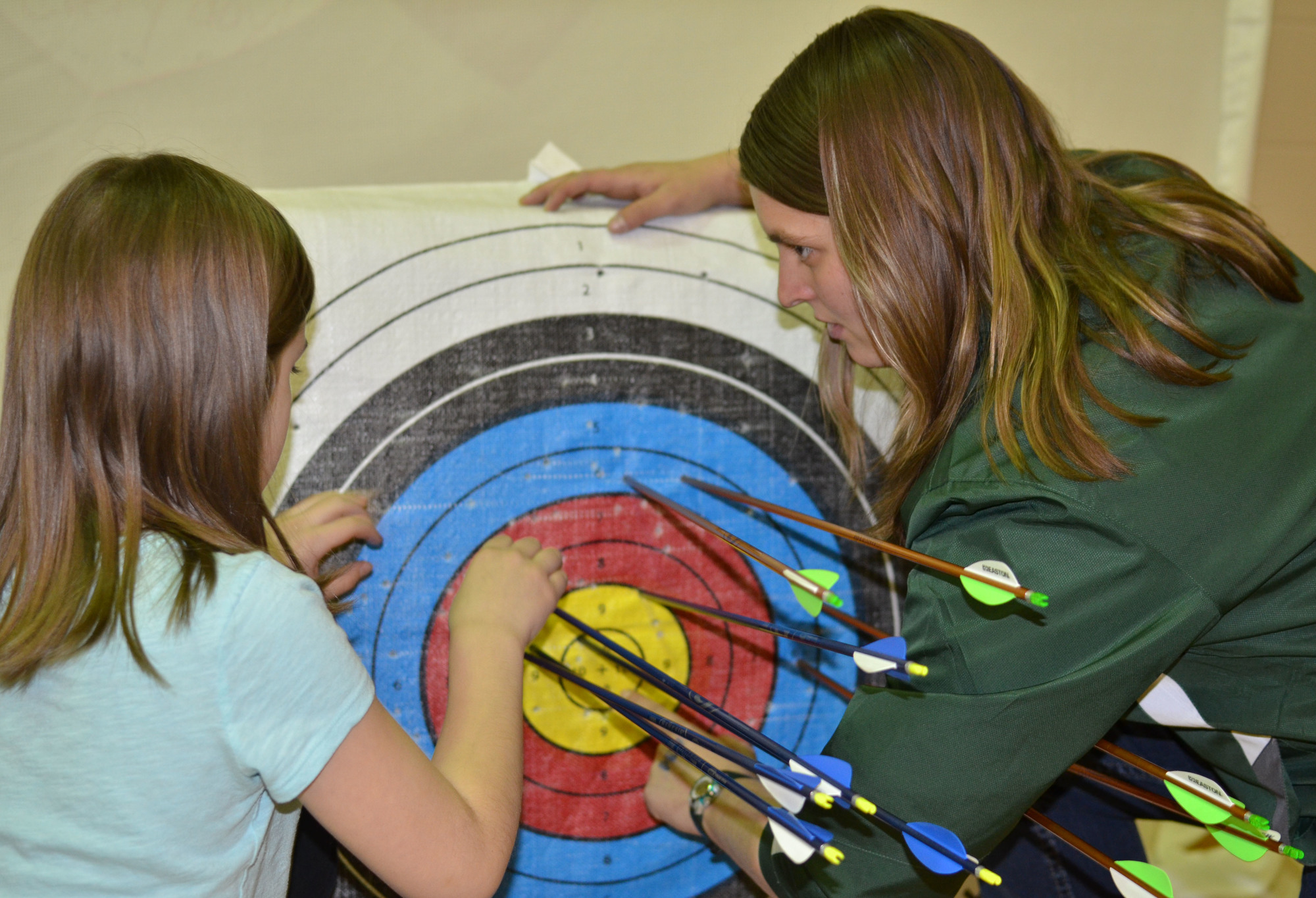 Cherry Creek's afterschool activity programs include, but are not limited to, basketball, track and field, Lego robotics, math club, book club, fly-tying, and Kids for Change. The afterschool archery program is the latest addition to their post-school day offerings.

Bengry said she's thankful for the opportunity the archery program has provided for the students, with the help of the DNR and Marquette County's U.P. Whitetails chapter.

"We could not have done this without them," she said. "This gives these kids an interest. They're excited, we're excited. The possibilities are endless."

Through archery, Bengry said the young students have been given "a common point with a lot of their families too." With family members excited and interested, all have plenty to talk about.

Deneau said that, for her, shooting the bow is the best part - just letting go of the arrow.

Reese said he thought archery would be a fun sport to do.

"It's something that you can think about," he said. "Like, (for) example, medieval is one of my favorite kinds of cultures, decades, so I think being an archer is pretty cool."

He said he thinks Robin Hood is pretty cool too. He's seen the movies. 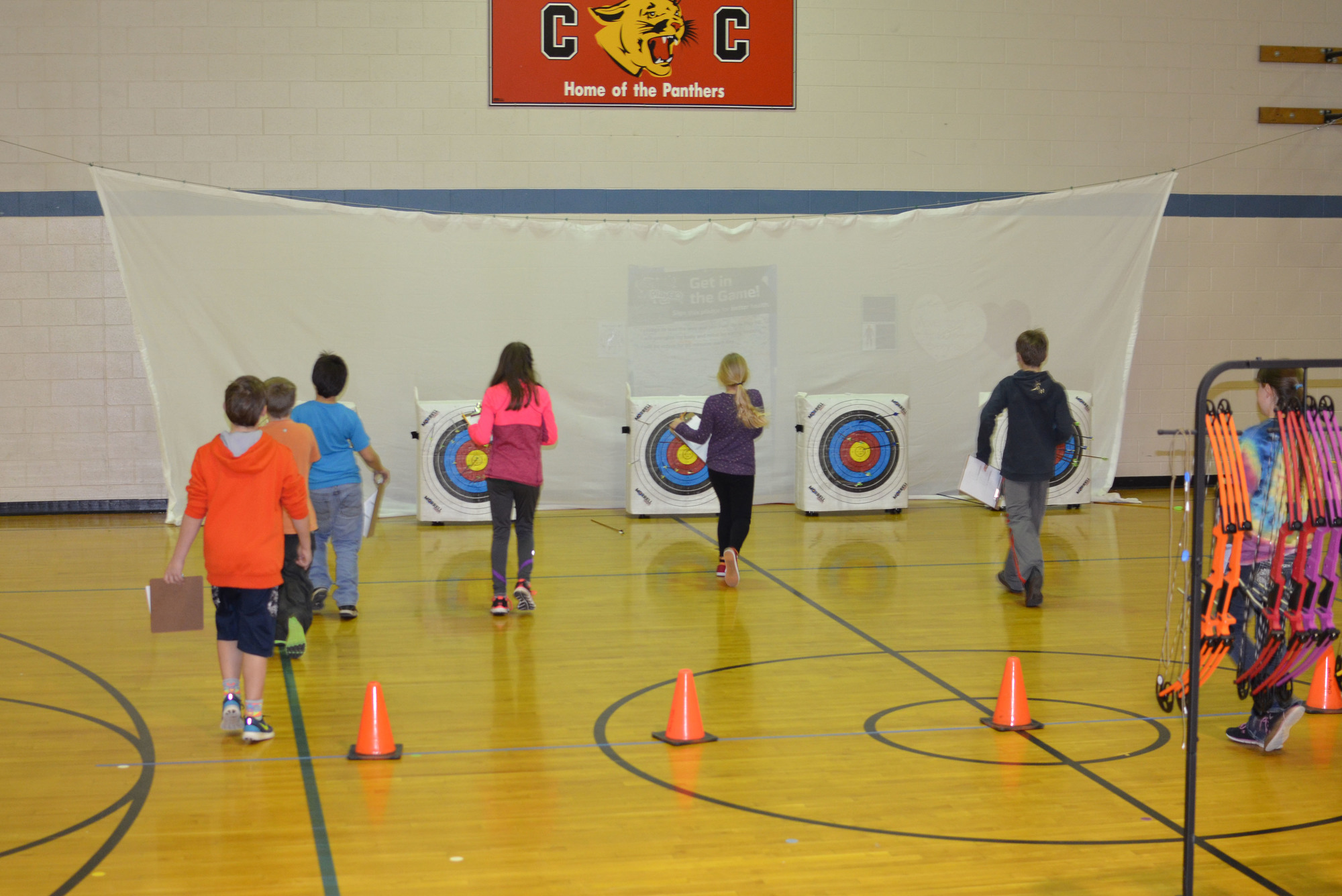 At a pivotal point in the 1938 action motion picture "The Adventures of Robin Hood," the smirking Saxon lord awaits his turn at the target in a classic Hollywood movie sequence.

Robin's rival has just buried a long shot in the bullseye of the target face.

"Why, he can't win now, no living man could beat that shot," came a call from the viewing stand.

And with that, Robin Hood split the shaft of his rival's arrow, piercing the bullseye himself, winning the competition.

Needless to say, great things happen for him after that in the film.

Brave, poised and skilled, Robin Hood was steady, calm and courageous. He could envision better things in the future for those around him, had faith they could occur and he would confidently help to lead them there.

Perhaps as a child, he too had picked up a bow, one day following an arrow poorly aimed, fallen in the grass.

To find out more about the National Archery in the Schools Program, visit michigan.gov/archery or to adopt a school, contact DNR archery education coordinator Kathy Garland at 313-396-6871.

Ready: Archers ready themselves to shoot at the Cherry Creek Elementary School south of Marquette.