In 20 locations, from Belle Isle to the dunes of Lake Michigan, people from all walks of life are rolling up their sleeves, putting on their gloves and going to work to protect high-quality natural areas from the threat of invasive species.

Laurel Malvitz-Draper, a natural resource steward with the Michigan Department of Natural Resources, oversees the Volunteer Steward Program for parks in southeast Michigan.

The program was initiated in 2006 to protect high-quality natural areas on state land to provide habitat for species of greatest conservation need in Michigan, including the eastern massasauga rattlesnake, monarch butterfly and cerulean warbler.

"We focus on areas with the most potential to protect biodiversity," said Malvitz-Draper. "Not just for plants and animals, but for small, lesser known species like the blazing-star borer moth or the red-legged spittlebug."

Sheila Bourgoin, a graphic designer from Saline, has spent some of her free time over the last six years as a volunteer steward, combing the woods in the Waterloo Recreation Area for garlic mustard and other invasive species.

Invasive species are those that are not native to Michigan and, when introduced, cause harm to ecosystems, the economy or human health.

"I was looking for something to do in the outdoors, and I heard about DNR's stewardship program," said Bourgoin. "It's like hiking, but better. When you are hiking, you're focused on the destination. Scouting for and removing invasive plants still involves walking in the woods, but you are focused on the surroundings, what is next to you or beneath your feet."

Charity Steere has been a volunteer steward at Waterloo Recreation Area for the last 12 years. She attended the park's very first stewardship day, hoping to learn more about the land and why it needed protection.

"My property is within the park, a private inholding, and the work site was at a prairie fen - a rare wetland created by cold-water springs - only a mile and a half away," Steere said. "We removed invasive autumn olive bushes, and it left me with a feeling of accomplishment, so I came back for the next event." 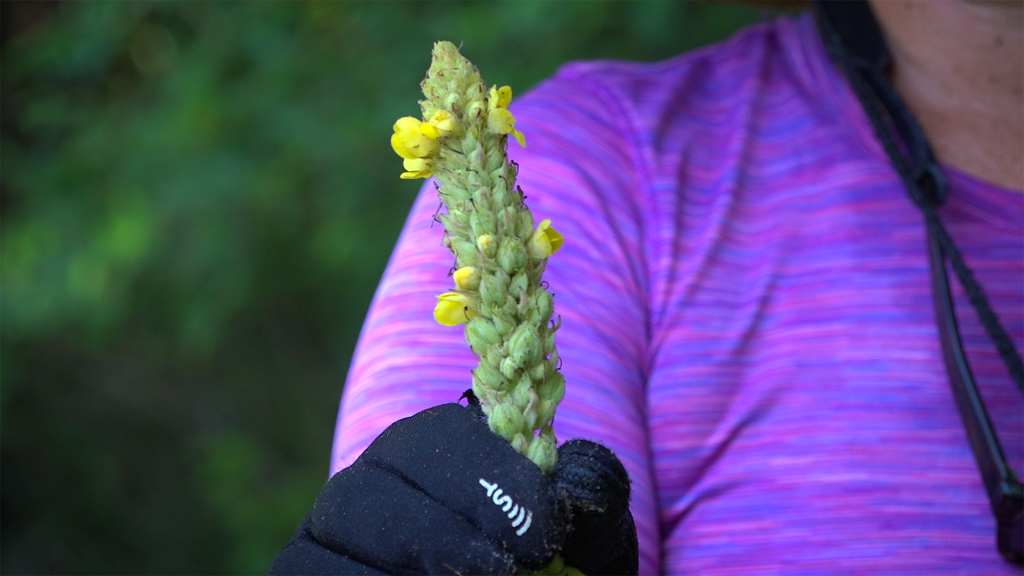 The Waterloo Recreation Area is the largest park in the Lower Peninsula, spanning over 20,000 acres between Jackson and Ann Arbor. The park offers camping, access to 11 lakes and 47 miles of hiking trails. It is also home to some high-quality natural areas, including remnant prairie, prairie fens and southern mesic forest.

Bourgoin, a volunteer coordinator with the DNR's Volunteer Steward Program, gets an early start each spring, hiking on and off the forest trails near the Gerald E. Eddy Discovery Center at Waterloo.

"I usually make several visits in March and April to see where the garlic mustard is coming up," said Bourgoin. "This helps me organize the workday and figure out where to direct the volunteers."

Garlic mustard is an invasive plant, originally from Europe, that thrives in wooded areas. It is one of the first plants to emerge in the spring, and it spreads rapidly, producing thousands of tiny seeds per plant.

Walking, trail riding and vehicle traffic contribute to spreading the seeds along trails and into the woods. Left unchecked, garlic mustard can take over the forest floor, crowding out native species like trillium, Jack-in-the-pulpit and other forest gems.

On a cool May morning, Bourgoin, a Certified Conservation Steward, leads volunteers through the woods. This year, the garlic mustard is sparse along the trails.

She points out a healthy growth of May apples and explains that the many plants are a colony, connected underground by roots called rhizomes. It seems the years of volunteer work are paying off.

"I want you to think of what this area would be like if we did not manage it regularly," Bourgoin said. "The garlic mustard is in check, but there are other plants we are looking out for."

Just a few minutes later, she pulls up a lush vine. 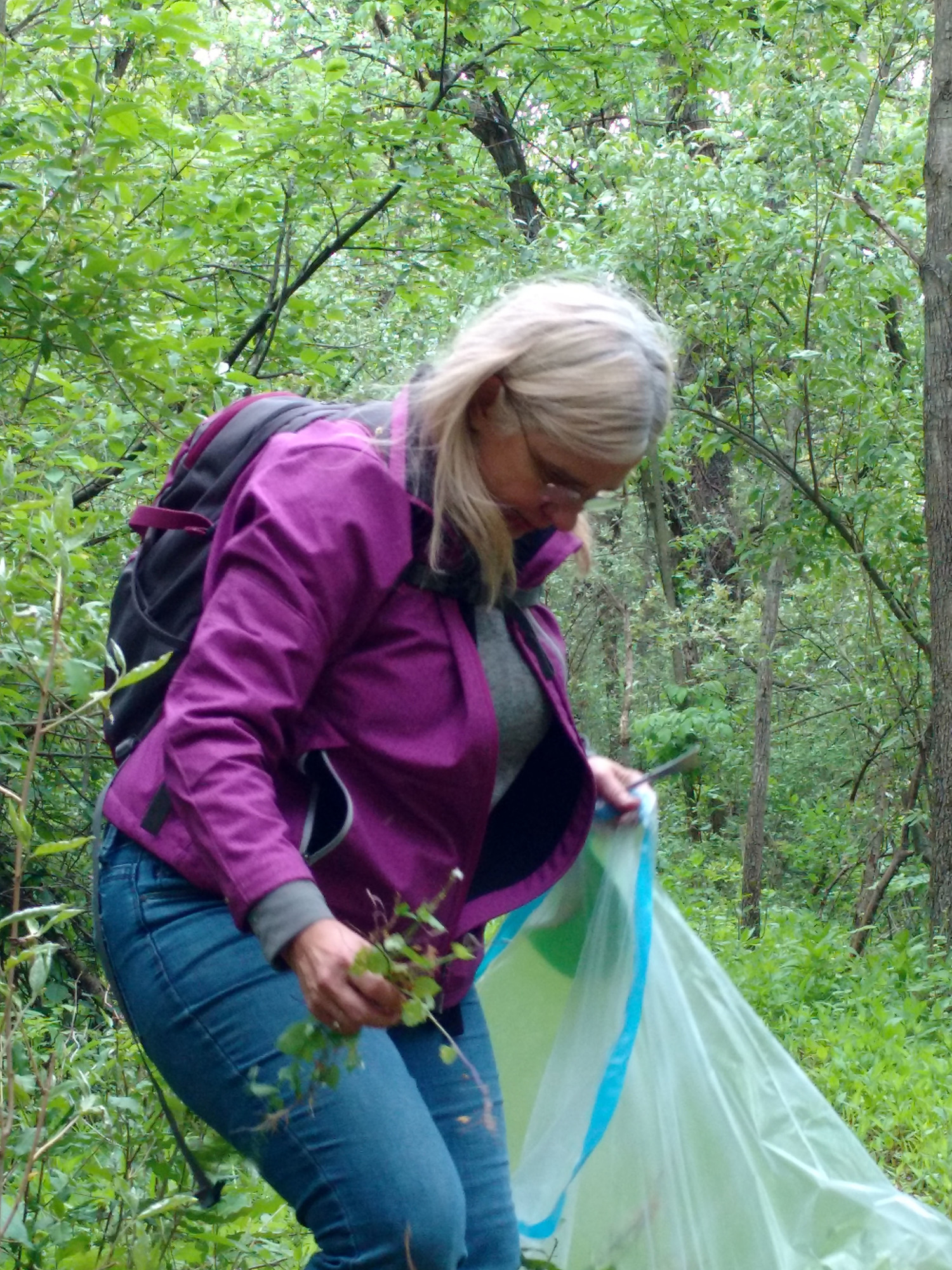 "This is Oriental bittersweet, and it's becoming a problem here," she said, holding the plant.

Imported from East Asia for its bright red ornamental fruit, Oriental bittersweet has now taken hold in fields and forests across Michigan, climbing and covering native trees and shrubs.

Other invasive plants, including autumn olive, a silvery-leafed bush, and Japanese barberry, a small, spiny shrub, are also identified just off the trail. These plants require different management techniques, including cutting, herbicide or possibly a prescribed burn.

Steere's favorite worksite is the remnant prairie along M-52.

Here, volunteers get familiar with spotted knapweed, an invasive, grayish-green plant with a thistle-like, purple flower. The plant's long tap-root makes it difficult to remove, but management is important because knapweed releases a chemical in the soil that prevents other plants from growing.

"We started out just removing knapweed across the prairie. Now, we are focused on smaller areas and removing all the invasive species from these sections," Steere said. "We are making progress, and in August it's rewarding to see the diversity of native plants in bloom."

Volunteer efforts are complemented by a program of prescribed burning conducted by DNR staff. Burning can be an effective method of reducing early-emerging plants, including many invasive species, to allow native plants and their seeds to take hold. The M-52 prairie was burned this spring, and another high-quality natural area at Waterloo, the Glenn Fen, is subject to regular burns to increase native plant diversity.

Steere became a stewardship leader in 2008, helping to increase volunteer days to twice a month at Waterloo.

According to Steere, these extra days still aren't enough.

"It's like a huge garden - we'll never get it all weeded," she said.

Despite the overwhelming nature of the task, Steere said she persists "because I'm stubborn, and I believe in the idea - in saving small islands of native species." 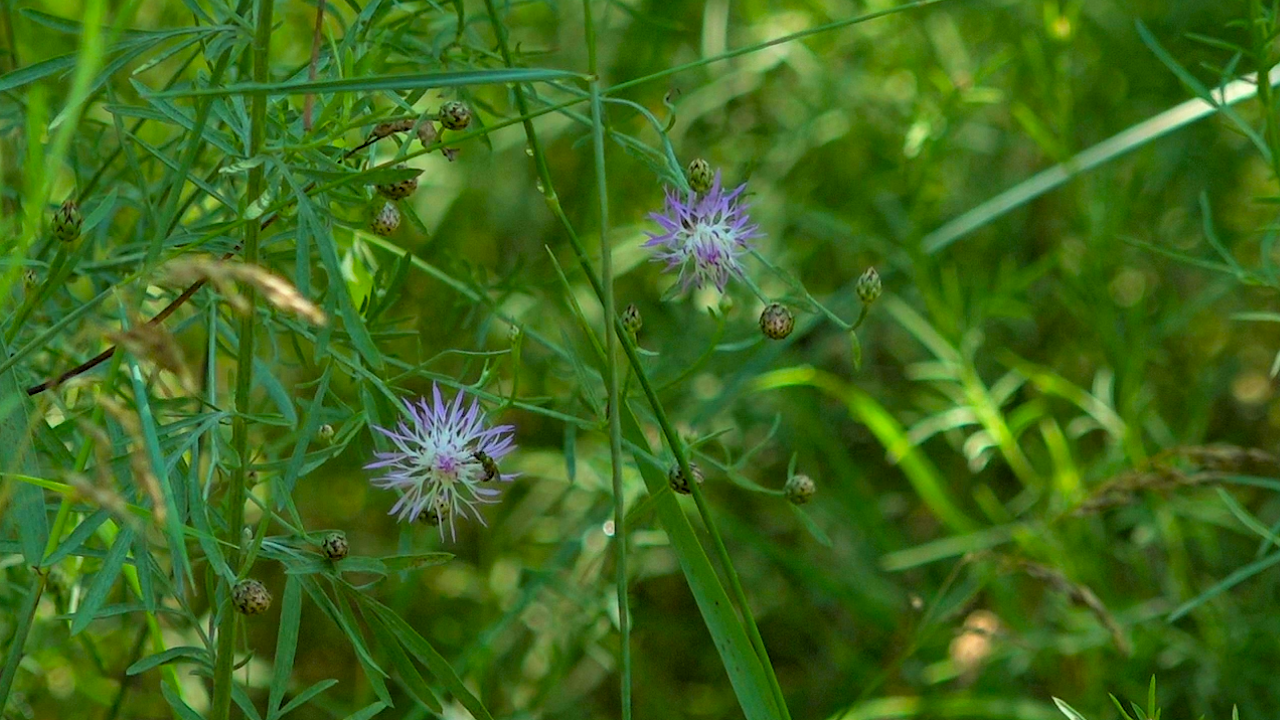 "Anyone who enjoys the outdoors, likes to learn new things about areas they use or may have passed by, or wants to get a closer look at ecosystems and how they are protected is encouraged to volunteer," Malvitz-Draper said. "No experience is necessary. It's a great opportunity to get outdoors, and it's open to all."

To learn more about all types of volunteer opportunities with DNR, including stewardship days, visit www.Michigan.gov/DNRVolunteers.

Information about identifying and managing invasive species can be found at www.Michigan.gov/Invasives.

Barberry: A common landscape plant with an invasive habit, Japanese barberry is spreading through woods and fields - transported by birds that eat its small, red berries.

Cartas: Volunteers in the remnant prairie remove the seed heads of common mullein, a tall invasive plant with soft, leathery leaves, to keep it from spreading.

Knapweed: Spotted knapweed is an invasive plant that emits toxins into the soil, preventing other plants from growing.