Picture yourself in a beautiful parklike setting with scattered, sprawling oak trees framed against a brilliant blue sky. As you bring your eyes toward the ground you see a blanket of wildflowers punctuated by clumps of grasses as far as the eye can see.

The air is sweet with nectar, and you see countless butterflies and notice deer and turkeys foraging in the distance. You hear the sweet trill of a multitude of birds and feel a breeze through the leaves of the bur oak in front of you.

This is how one settler described walking through an oak savanna in southern Michigan.

“Tallgrass prairie and associated savanna were at their continental boundary in southern Michigan when white settlers arrived and had largely disappeared before scientists could describe them,” Kim Alan Chapman and Richard Brewer, of the Department of Biological Sciences at Western Michigan University, said in their scientific paper on the history, classification and ecology of prairie and savanna in southern Lower Michigan.

Chapman and Brewer said the historical extent of upland prairie, wet prairie and savanna in Michigan was estimated to be 2.23 million acres, with savanna constituting 78 percent.

“Today over 99 percent of these original savannas are gone,” said Ken Kesson, a Michigan Department of Natural Resources wildlife biologist for Berrien, Cass, St. Joseph and Branch counties. “This is unfortunate, as many wildlife species use savannas for all or part of their life cycle.”

“Savanna, a fire-maintained plant community co-dominated by herbaceous plants and trees, was called oak openings or oak barrens by European settlers, depending on the type of soil and tree species,” according to Chapman and Brewer. “…Given the historical abundance and modern rarity of prairie and savanna in Michigan, their ecological status is of great scientific and conservation interest.”

In southwest Michigan, the DNR Wildlife Division has identified savannas as a priority ecosystem for habitat restoration and management. Consequently, savanna management is occurring on many of the state game areas and sites on private lands throughout the area.

One example of work being done on public land is the Preston Road Savanna Project at the Three Rivers State Game Area in western St. Joseph County.

This unique project highlights how partners from the private and public sectors can work together to complete an excellent restoration project that benefits wildlife species, provides a valuable boost to Michigan’s economy and offers exceptional recreational opportunities for state game area visitors.

The Preston Road savanna was historically a black oak savanna.

“In evaluating the site during the summer of 2015, DNR staff identified scattered, large, open-grown oak trees and several savanna indicator species in the understory,” Kesson said. “These observations indicated the site may respond positively to restoration and management efforts.”

During the spring of 2016, Northrop Logging, a local timber company, approached the DNR about the possibility of harvesting hardwood chip material from state-managed lands.

DNR staff recognized the opportunity to work together with the timber company and capitalize on the new, local market demand for chip material to remove trees that had invaded the Preston Road savanna site.

“It’s nice to have the opportunity to work close to home with the local land managers,” said Al Northrop, owner of Northrop Logging. “It saves us money in trucking and provides a good product that we need.”

The harvested wood chips eventually will be used by another local company from Holland, Michigan to create wood pellets for heating homes across the Midwest.

“The DNR strives to work with local companies and organizations to achieve mutually beneficial goals,” Russ Mason, DNR Wildlife Division chief, said. “Partnerships such as this enable us to accomplish projects that otherwise may be impossible or too costly to complete independently.” 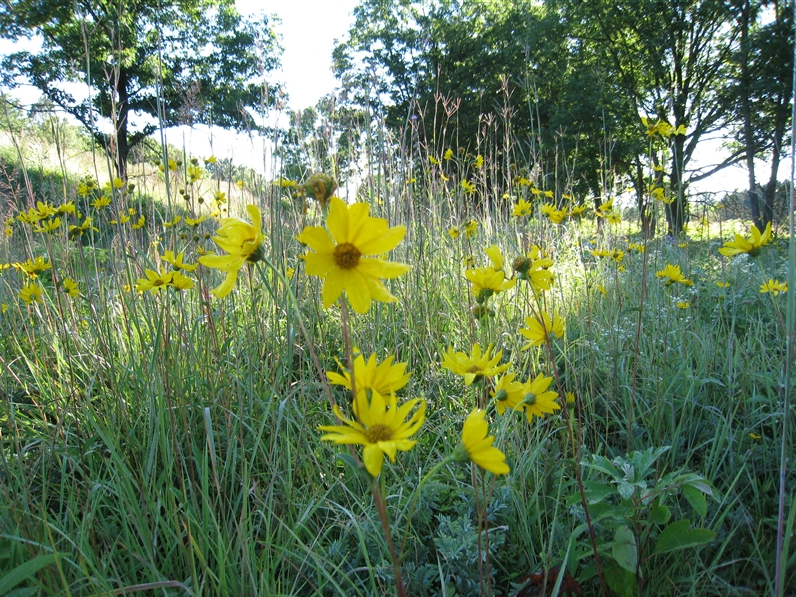 The timber harvest and chipping process was completed this spring, and further restoration efforts have been initiated. The process of clearing the woody debris left from the timber operation is currently underway.

At the same time, the DNR realized an opportunity, through another partnership, to enhance wildlife habitat in at the Crane Pond State Game Area in neighboring Cass County.

The agency worked with Enbridge Energy Partners, L.P. and Pheasants Forever to leverage mitigation funds from an Enbridge pipeline replacement project to receive additional funding to favorably impact the site.

“With funding from Enbridge Energy and Pheasants Forever we were able to improve local habitat conditions in the same area where habitat was impacted by pipeline replacement – thereby balancing local impacts with local improvements,” said Mark Sargent, DNR Wildlife Division southwest region supervisor. “This was an excellent example of preparation meets opportunity, and in 2016 the project began.”

The site soon will be treated to combat invasive species. Previously farmed openings will be planted to generate a high-quality savanna restoration mix of plant species. Areas that have plants that could potentially help rejuvenate seed banks will be allowed to regenerate.

Habitat rehabilitation at the site will require continued management for several years, but in the end, the result will be a quality oak savanna for the people of Michigan to enjoy and visit for generations to come.

“The project would not have been possible without strong partnerships involving the private sector to accomplish the clearing work, and through the generous support of Enbridge Energy and coordination through Pheasants Forever,” Kesson said. 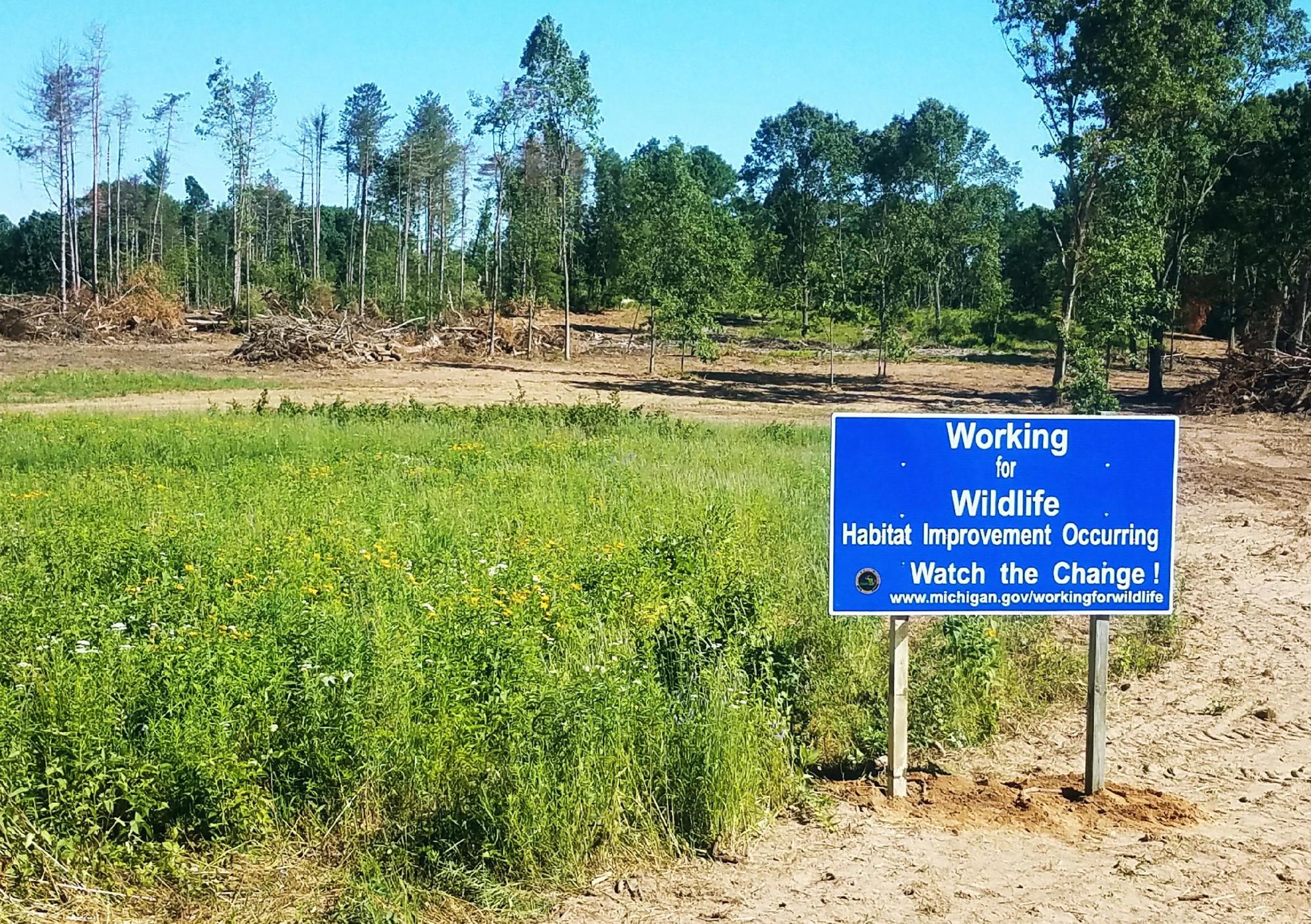 Projects like the Preston Road savanna work demonstrate how strong partnerships can be used to affect quality management of state lands.

There are many other projects in the DNR’s southwest region that also highlight how the DNR is working for wildlife by cooperating with conservation partners, local communities, businesses and organizations.

Habitat destruction has a major impact on game and non-game animals, including threatened and endangered species. Strengthening ecosystems, in this case oak savanna, through habitat work is critical to the survival of Michigan’s wildlife.

Chapman and Brewer said, “Michigan’s extensive savannas defined much of southern Lower Michigan and were characterized by a complex interaction of fire, tree canopy cover, and herbaceous plant diversity.

“Soils, landscape setting, drought, and other disturbances influenced these interactions. The oak grubs found in Michigan’s savannas and described by early writers are now understood as essential for perpetuating the tree canopy of fire-maintained savannas.

These remnants represent less than 0.1 percent of Michigan’s historical prairie and savanna acreage.”

In their “Prairie and Savanna in Southern Lower Michigan: History, Classification, Ecology” — which was published in the Michigan Botanist — Chapman and Brewer said, given this historic loss of habitat, “any remnant should be protected, but especially the oak openings, which were a dominant ecological feature of southern Lower Michigan.

“Since oak openings existed on a large scale, small reserves are insufficient to represent former ecological processes and encompass the majority of animal and plant species characteristic of oak openings.”

The writers urged conservation groups and natural resource agencies “to identify, protect and restore large blocks of oak openings in southern Michigan, especially those that contain other prairie and savanna plant communities.”

Butterfly: An eastern tiger swallowtail (Papilio glaucus) is shown on a flower. The butterfly is one of many species of common pollinators that benefit from savanna and prairie habitat.

Photopoint: A photopoint monitoring location is shown, which will be used to document change over time of this savanna restoration site.

Plants: A diverse mix of established restoration plants is shown.

Restored: A restored savanna in Cass County is shown.

Sunflower: Western sunflower is a plant found in savannas and prairies in southwest Michigan.