After more than two decades of study and testing white-tailed deer for bovine tuberculosis, Michigan has become world-renowned for its research and expertise on managing this serious contagious disease.

Over this time, Michigan Department of Natural Resources wildlife managers have learned a great deal, including that continued assistance from hunters and others remains vitally necessary to make significant gains in battling bovine tuberculosis into the future.

Tuberculosis (TB) is a serious disease caused by certain bacteria that attack the respiratory system of animals and humans.

There are several types of tuberculosis, but bovine tuberculosis (bTB) can infect the widest variety of animals and is what wildlife managers have been trying to eradicate from white-tailed deer in Michigan.

"Michigan is one of the leading experts in management and information related to bTB," said Kelly Straka, DNR state wildlife veterinarian. "We are the only state in nation that has bTB established in wild deer."

Although originating and typically occurring in cattle, bTB can infect nearly any mammal, including humans. Bovine TB is caused by the bacterium Mycobacterium bovis (M. bovis), which is part of the Mycobacterium tuberculosis complex.

"This disease is contagious and can be debilitating to deer. Severely infected animals can struggle to even breathe," Straka said. "By not eradicating this in the herd, we risk the spread of the disease to new areas of Michigan and into our wild elk herd.

"In addition, this is devastating to cattle producers. Trade restrictions, expensive testing and quarantines can lead to the loss of family farms and are a terrible burden on Michigan's economy."

Bovine TB is spread primarily through the exchange of respiratory secretions and saliva between infected and uninfected animals. This transmission can happen when animals are in close contact with each other.

Bovine tuberculosis is a chronic disease that can take years to develop. The strains of bTB now present in Michigan are not native to North America, but were brought here by human movement of infected cattle from Great Britain in the 1700s and 1800s. 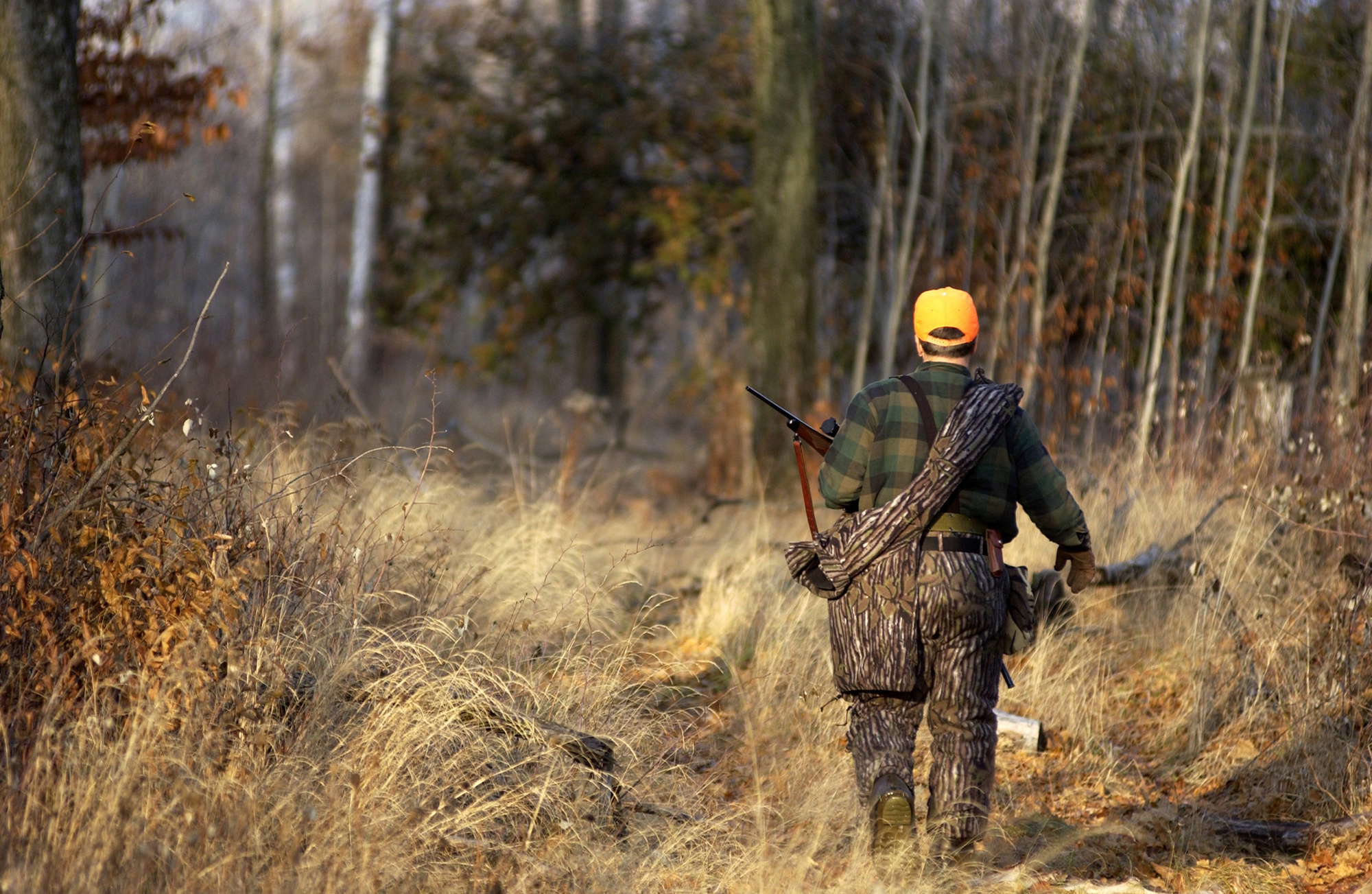 In the 1920s, nearly a third of cattle in Alpena and Alcona counties tested positive for bTB. In 1975, a single hunter-harvested white-tailed deer in Alcona County was found positive for bTB. At that time, it was thought that bTB couldn't sustain itself in wild deer.

Since 1995, Michigan has been testing white-tailed deer for bovine tuberculosis year-round. Michigan has the longest- running continuous wildlife TB surveillance program in the world.

"Most Michiganders, and even most policymakers, don't realize how much we've learned about bTB in the last 20 years", said Dan O'Brien, veterinary specialist with DNR's wildlife disease lab. "The research we've done here in Michigan is respected around the world.

"Other countries dealing with similar outbreaks of bTB continue to watch our situation with great interest. At this point, we know what it will take to get rid of bTB. Whether we as a state will choose to make that happen though is still an open question."

To date, nearly 900 of over 230,000 deer tested in Michigan have been positive for bovine tuberculosis.

Seventy-eight percent of these TB-positive deer have been from a core area - Deer Management Unit 452 - in the northeastern part of Michigan's Lower Peninsula, where the counties of Montmorency, Alpena, Oscoda and Alcona meet. 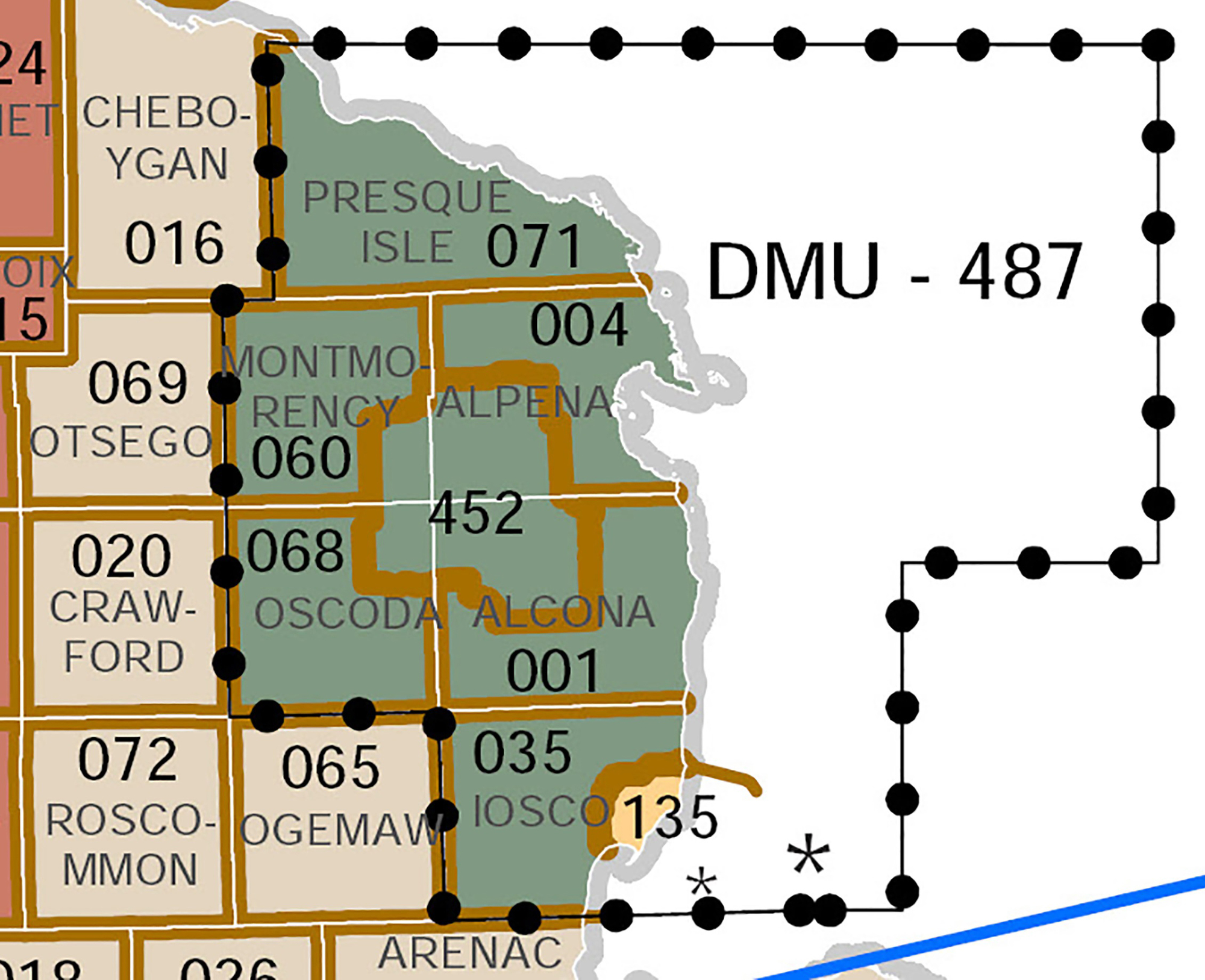 However, bTB is endemic (i.e. self-sustaining at a low level) across all four of those counties, and in Presque Isle County. Ninety-seven percent of all the bTB-positive deer ever found have come from that five-county endemic area.

"We continue to commit time and resources to fighting this disease. This year, we are reinvigorating the message that we still need help," Straka said. "This is a chronic disease, and we need all Michiganders to be on board for the long haul."

Hunting has been the primary tool for managing bovine tuberculosis in Michigan.

"The majority (93 percent) of land in DMU 452 is private and is known locally as 'club country'," said Brian Mastenbrook, DNR wildlife field operations manager. "One of the primary reasons to own this land and be club members is to hunt deer. We work with as many of the clubs as we can on all aspects of deer herd management.

"We appreciate the cooperation of the club members and all the other hunters throughout DMU 452. Hunters have been responsible for reducing the disease prevalence by over 50 percent between the mid-1990s and now."

Recently, the Michigan Hunting Access Program expanded into the northern Lower Peninsula specifically to open more land to deer hunting. The program leases private lands and makes those lands available to anyone with a valid hunting license.

"The Hunting Access Program, along with a couple of private land habitat grant opportunities, is a way for us to talk with more people about deer management in this area," Mastenbrook said.

The DNR reminds all hunters to get their deer tested. A deer can look healthy and still have bovine TB. 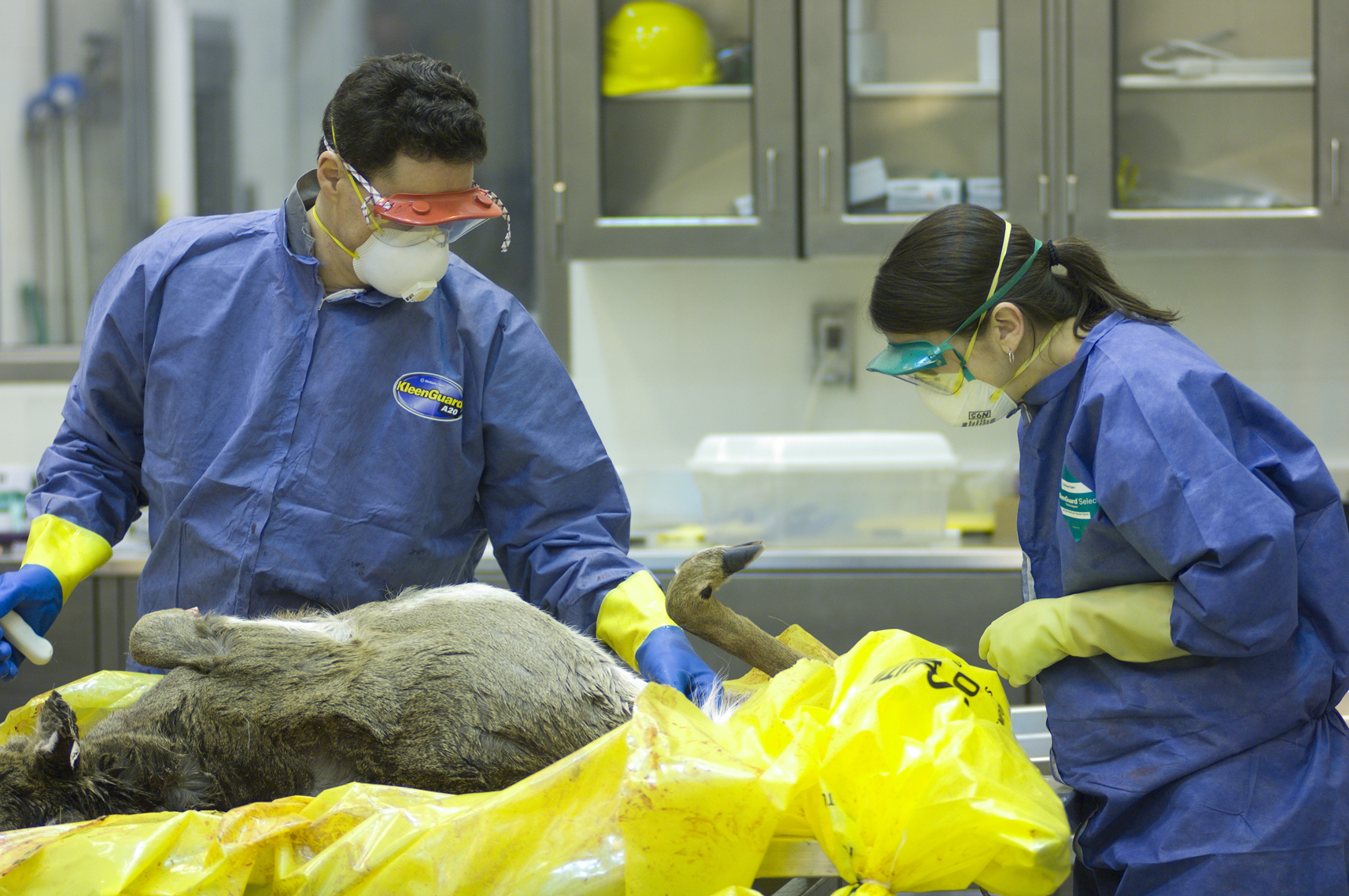 "In fact, over 60 percent of the bTB-infected deer we've ever tested have had no signs of disease a hunter would recognize," Straka said.

Working together for success

Despite many efforts over the years, bovine tuberculosis has not gone away. In 2016, 29 deer and six cattle herds tested positive for the disease.

"Since the first TB-affected cattle herd was discovered in June 1998, there have been a total of 69 cattle herds, five feedlots and three privately owned cervid facilities found to be infected with the Michigan strain of bovine TB," said Rick Smith, assistant state veterinarian.

Many of these new methods are implemented at the grassroots level; cattle producers are encouraged to strengthen bio-security practices at their farms, hunters are asked to harvest deer and private landowners are offered incentives to open their properties for hunter access.

The state agencies involved in bTB management are committed to doing their part, but cannot regulate the disease to eradication.

"Michiganders need to educate themselves about this disease, and find out ways they can help," said Russ Mason, DNR Wildlife Division chief. "Whether you are a hunter submitting samples for surveillance, or a cattle producer fencing off feed to prevent cattle/deer interactions, it's these everyday actions that can affect change over time.

"This is not a problem for just deer hunters, or cattle farmers, or even residents in the northern Lower Peninsula; this is a problem for everyone in Michigan."

Infected deer may not show chest lesions. Deer carcasses with chest lesions suspected to be evidence of bovine TB should be submitted from anywhere in the state. A list of DNR deer check stations is available at Michigan.gov/Deer. 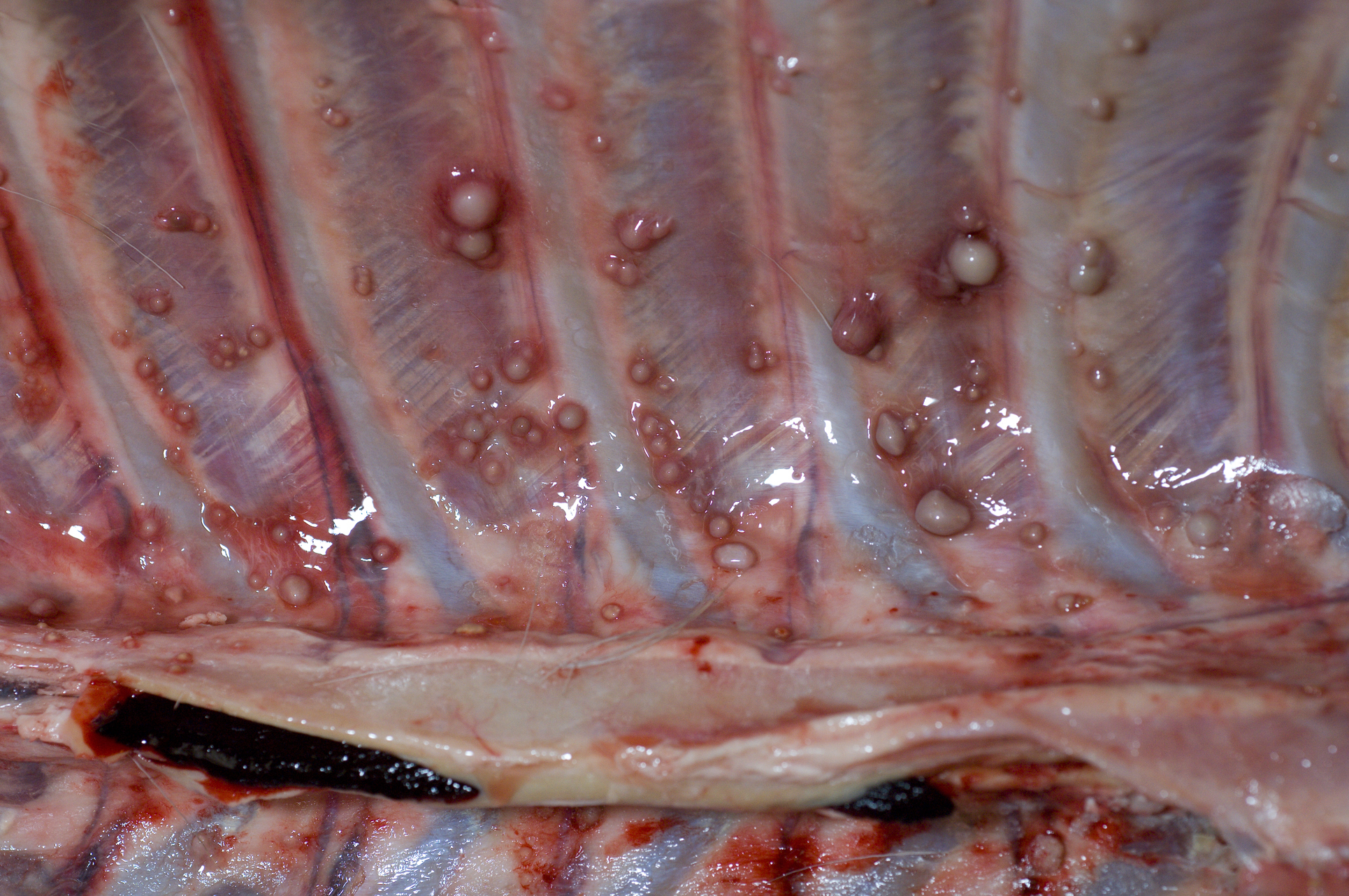 DNR wildlife managers encourage anyone who sees a deer with this type of infection to contact the DNR so the carcass can be examined. Hunters may check their deer or elk TB lab results at Michigan.gov/DNRLab.

There are signs of bovine tuberculosis hunters may observe when field-dressing a deer.

Lymph nodes in the animal's head usually show infection first and, as the disease progresses, lesions may begin to develop on the surface of the lungs and chest cavity. In severely infected deer, lesions can sometimes be found throughout the animal's entire body.

Deer with severe TB may have tan or yellow lumps lining the chest wall and in the lung tissue. Deer showing this type of infection should be submitted to the DNR for laboratory testing.

In the years since bovine tuberculosis was discovered in wild white-tailed deer in Michigan, much has been learned about this contagious disease.

The DNR and other agencies working to eradicate bovine tuberculosis from our state encourage Michigan residents to educate themselves about this affliction and do what they can as individuals and groups to help fight it.

Hunter: A Michigan hunter takes to the field. Hunters and others in Michigan will continue to play a vital role in battling bovine tuberculosis in the state's deer populations.

Lung: White-tailed deer infected with bovine tuberculosis may have multiple pea-sized tan or yellow lumps on the lungs. The lesions may be different shapes and sizes than those shown in the photo.

Map: A map shows Deer Management Unit 452, a core area where 78 percent of white-tailed deer testing positive for bovine tuberculosis in Michigan have been found.

Ribs: White-tailed deer infected with bovine tuberculosis may have multiple pea-sized tan or yellow lumps on the inside of the ribcage.