Fisheries managers have many high-technology tools available today - acoustic tracking, remote satellite imagery, environmental DNA - that might make old-timers shake their heads and think it all sounds like science fiction.

But old-fashioned techniques continue to provide fisheries managers with data that helps them make management decisions that benefit both the fisheries resource and anglers.

Nowhere is this truer than when it comes to managing the Great Lakes' oldest denizens - lake sturgeon.

The Michigan Department of Natural Resources has been monitoring sturgeon populations on the St. Clair River for the last 25 years with a technique that is as old as fishing itself.

DNR crews use set lines that are anchored to the bottom of the river channel and sport numerous hooks to catch and tag the mysterious prehistoric fish.

The DNR's research vessel, Channel Cat spent much of June on the North Channel of the St. Clair River, above Lake St. Clair, setting and running what are essentially trot lines to monitor what's going on with the Great Lakes' most significant sturgeon population.

"This is the largest natural reproducing population of sturgeon in the Great Lakes," said Todd Wills, who heads up the Lake St. Clair Fisheries Research Station. "We estimate the population in the St. Clair system at about 30,000 fish, 2 years old or older, with about 12,000 of them concentrated in the area being surveyed."

DNR crews set lines Monday through Thursday and run those lines Tuesday through Friday throughout most of June. They set nylon rope lines 500 feet in length, with the middle section containing 25 hooks on tarred nylon leaders.

The single hooks - either 2/0 freshwater hooks or larger, size 4 saltwater hooks - are attached 10 feet apart and baited with dead gobies.

Smaller hooks help catch smaller fish, though it takes one of the larger hooks to hold the biggest fish, which can weigh 100 pounds or more. 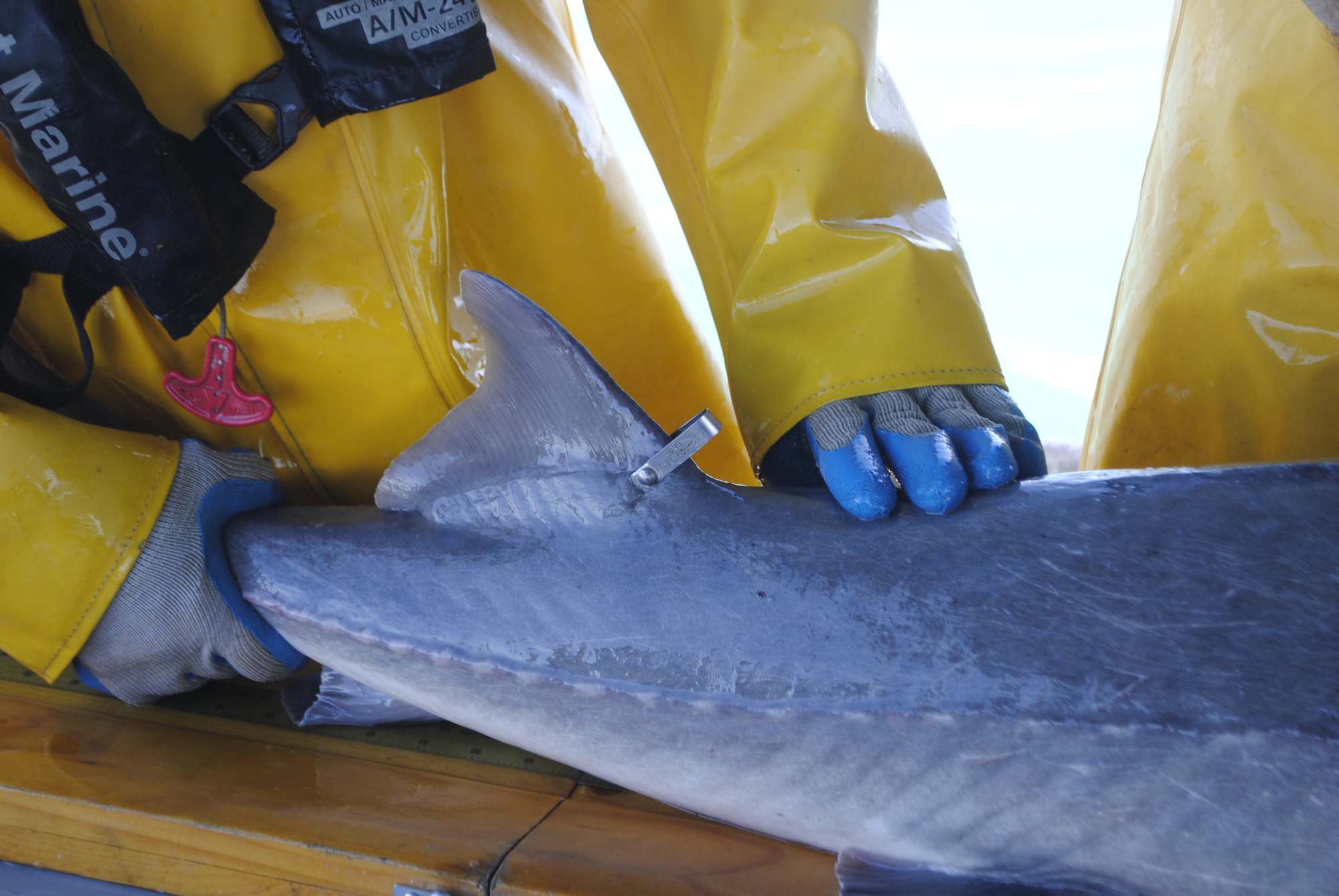 The lines are set in deep water, from about 38 to 70 feet deep, running roughly perpendicular to the bank. They're marked with large floats and kept on the bottom with large double-claw crab anchors.

The set lines are spread over approximately 4 miles of river where sturgeon traditionally have been caught. The set lines are the DNR's most efficient method of monitoring sturgeon, though the crew also trawls for them on the lake in the summer.

"Trawling produces fewer fish, and it's pretty variable by year," Wills said. "Some years they're harder to find."

Typically, it takes a six-person DNR crew, as well as some volunteers, to work the lines. Occasionally, some special guests are invited to observe.

"We had Governor Snyder out last year," Wills said.

The crew begins by hauling in the lines, hand-over-hand, netting any fish that have been hooked. The fish are transferred into a holding tank aboard the research vessel and are worked up as soon as the line is cleared.

DNR personnel record more data than a marketing firm. The fish are weighed, measured three ways - total length, girth at its widest, and commercial length (from the gill plate to the base of the tail) - and the number of visible lamprey scars is noted.

Crew members squeeze the sturgeon to see if they release eggs or milt, which is the only way to determine their sex, and crew members note anything unusual like missing barbels (whisker-like sensory organs found near the snout) or damaged fins.

Fish are injected with passive integrated transponder (PIT) tags if they haven't been tagged before and recaptures are noted. If the fish is longer than 40 inches, it's also fitted with a numbered external tag on the dorsal fin. If the sturgeon is shorter than 40 inches, a pectoral fin ray is taken to estimate the age of the fish. 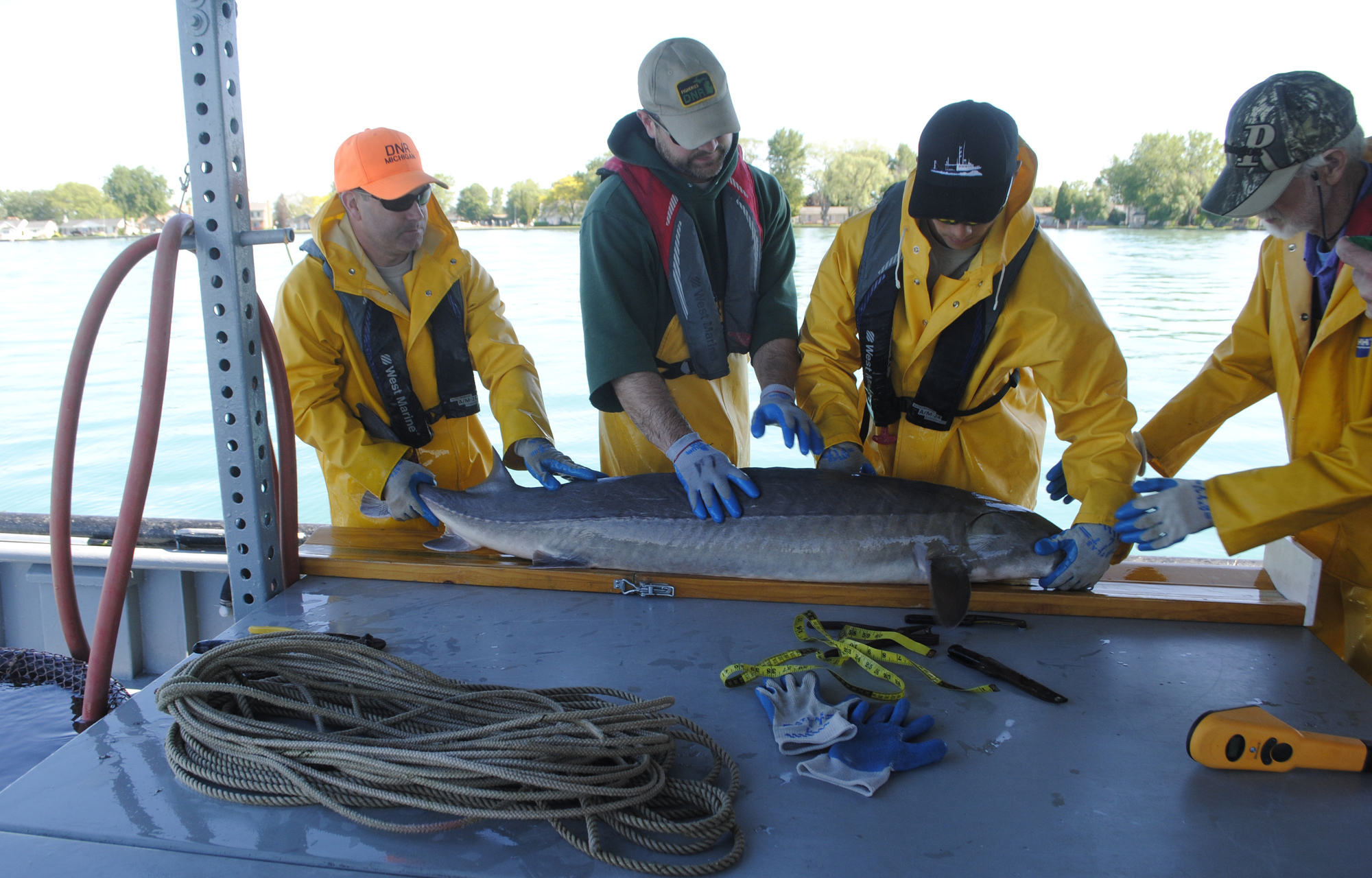 After data are collected, the fish are released and the crew makes sure they swim off unharmed before moving along. The gear is stowed until the lines are reset after all lines have been run.

"It's an all-day job to run and set lines if we're successfully capturing numerous fish," Wills said. "Any day you get 20 fish or more it's a really good day."

The catch-and-keep fishing season in Lake St. Clair and the St. Clair River is July 16 - Sept. 30 this year. Anglers can keep one fish between 42 and 50 inches annually. Harvested fish must be tagged by the angler and reported to the DNR.

"Our catch data from the set line survey shows about 80 percent of the population is protected with the current regulation, which allows the unique opportunity to harvest a fish for anglers who choose to do so," Wills said.

"Harvest is usually low, with no more than a dozen fish taken each year. It's largely a catch-and-release fishery enjoyed by a very strong contingent of anglers. It's getting more popular."

Roy Beasley, who captains the Channel Cat, says working the sturgeon survey is an enjoyable assignment.

"I think it's the most fun," he said. "It can be challenging when there are a lot of big boats around or high winds. But the fish are big and you don't need a lot of gear. 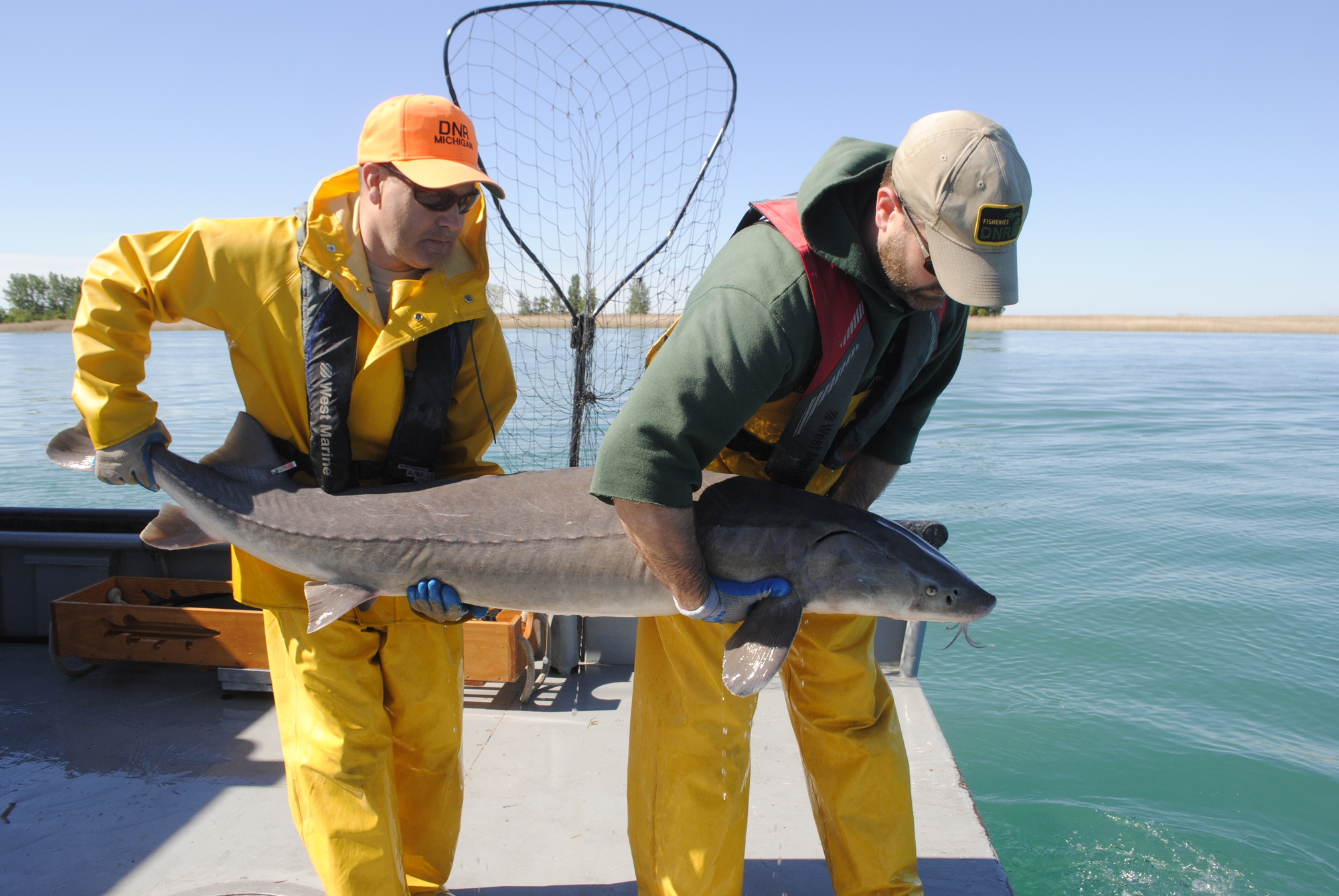 Chet Kilanowski, a retired letter carrier, is one of the volunteers who occasionally helps out on the Channel Cat.

"I always wanted to do something with fish and wildlife so I volunteered," he said. "I've been helping out for 12 years. When we first started the DNR had a smaller staff and really needed the help. Now I go every once in a while, like if one of the crew is out. I fill in whenever they need me.

"There's nothing wrong with volunteering when you're retired."

Get more information on lake sturgeon in Michigan at Michigan.gov/Sturgeon.

Line: A small sturgeon caught on a setline.

Mouth: Sturgeon feed by picking up food items off the lake or river bottom with their under-slung mouths.

Tag: Large sturgeon are tagged on the dorsal fin.