Take a behind the scenes look at fire response analysis

Michigan Department of Natural Resources fire officials said some important distinctions played a role in the very different behaviors and outcomes of two fires burning in a jack pine barren — years apart, but geographically close to each other — in Marquette County.

At about 7 p.m. May 13, Marquette County Sheriff’s deputies were dispatched to a wildfire burning about 7 miles south of Ishpeming, near the intersection of County Road 581 and the Island Lake Road.

“Initial responders advised that a forest fire was actively burning in a southerly direction,” the sheriff’s office said in a news release. “As a precaution, residents in the immediate threat area were evacuated by Marquette County Sheriff deputies, with the assistance of Michigan State Police troopers.”

Eight families were evacuated from the area.

Firefighters and homeowners in the vicinity remembered well the Black River Falls Fire from nearly a decade prior, which was touched off by a sparking powerline, almost directly north of the current fire, across Island Lake Road.

The Black River Falls Fire, which ignited shortly before 5 p.m. May 20, 2009, swept north, blackening more than 800 acres and destroying 33 structures, including 21 homes.

The evacuations for the Black River Falls blaze were widespread, and electricity was knocked out to residents and businesses in the area.

This new blaze, dubbed the Island Lake Fire, was contained within just over a couple of hours, burned a total of 23 acres, with no structures damaged or destroyed. The cause of the fire was not determined.

The two blazes ignited, each in the month of May, in the same jack pine forested area, but their complexions varied greatly, as did their ability to destroy property and resources. Why?

One big factor was the time of day the fires occurred. 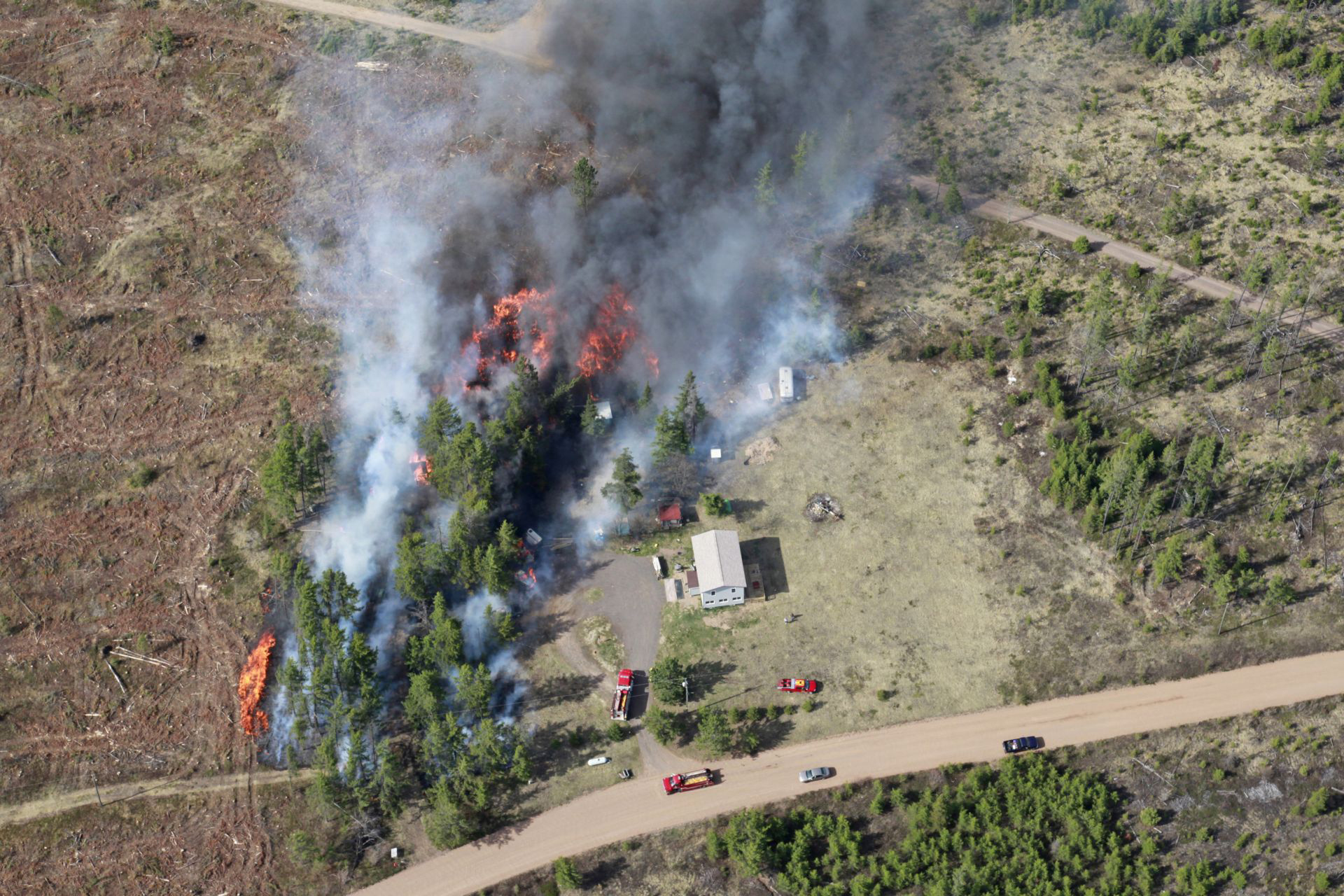 “This was a huge help with the temperatures of the day cooling down, relative humidity readings coming up, and lighter winds,” said Keith Murphy, a fire management specialist at the DNR’s Incident Coordination Center in Marquette, referring to the Island Lake Road blaze.

Pete Glover, the DNR incident commander for the wildland fire portion of the Island Lake Fire, said winds were light from the north at 3-5 mph.

The Gwinn remote automated weather station had forecasted “moderate” fire danger for the day, which ended up being “high” fire danger.

On the morning of the Black River Falls Fire, fire-weather forecasters had issued Red Flag warnings, which are issued when the anticipated conditions include sustained winds of 15 mph or greater, relative humidity at 25 percent or lower and temperatures above 75 degrees — windy, dry and warm — prime conditions before spring green-up or after fall color for extreme burning.

“A strong warm front was coming through the area on this day, which would produce very warm temperatures of 85 to 90 degrees, relative humidity in the low 20s to high teens, and winds 20 to 30 mph, with gusts up to 40 mph at times,” Murphy said.

The Gwinn weather station was forecasting “extreme” fire danger, with indices pointing toward extreme fire behavior and crown fires in the pines (burning through the upper branches), should a blaze ignite.

“The day before had snow flurries in the air,” Murphy said.

Again, the big difference was the Island Lake Road Fire had very little wind and relative humidity reading in the upper 40 percent range. 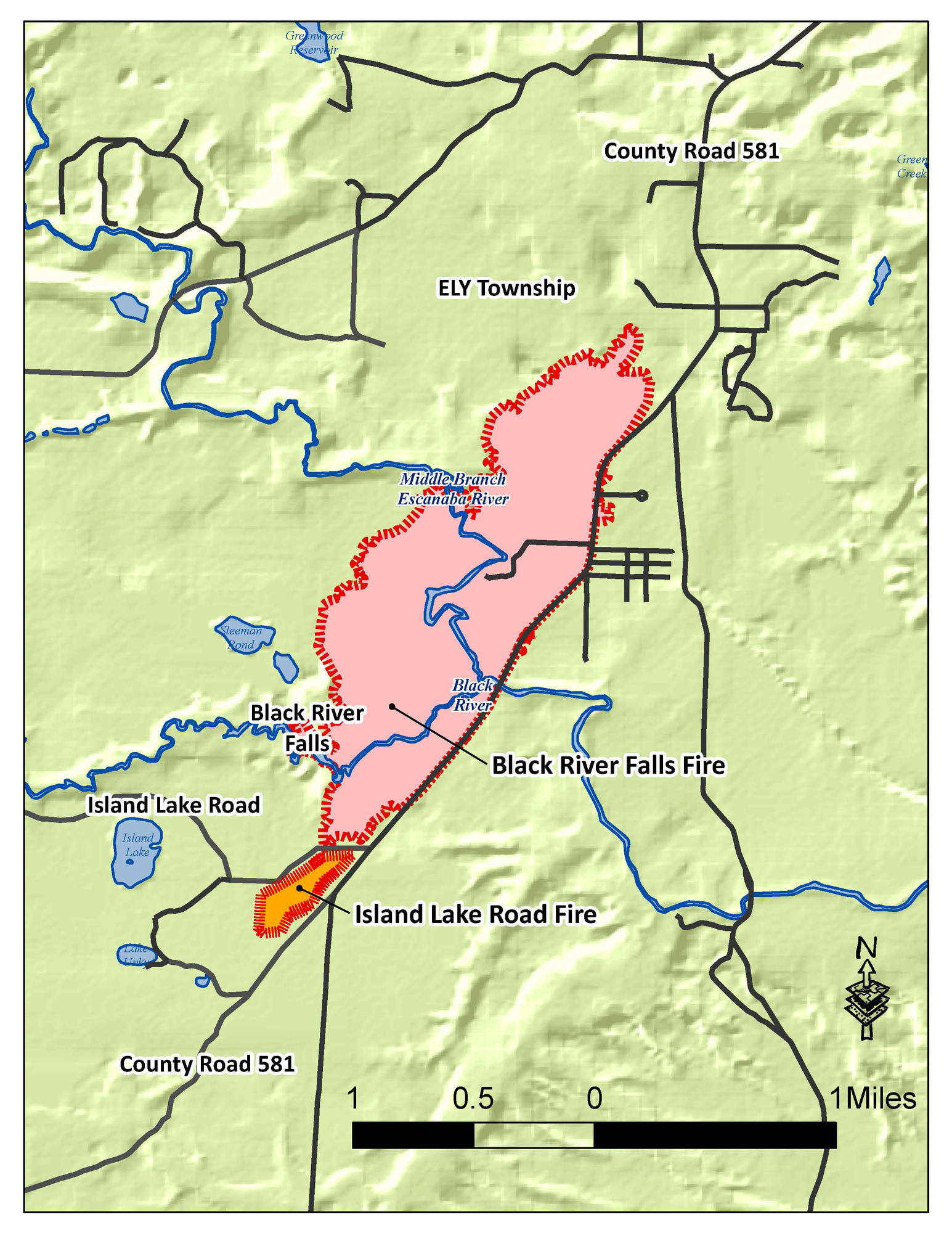 “When this fire got to the taller pine, the forest floor was more shaded, which calmed the fire down and didn’t allow these fuels to dry out in the afternoon sun earlier in the day,” Murphy said.

The rate the fire spread was much slower on the Island Lake Road Fire.

Fire spread rates forecasted for the jack pine were over 1 mph on the Black River Falls incident.

“The wind and low relative humidity really kicked our butts,” Murphy said. “The fire was spotting up ahead of itself all over. There was no chance of stopping this fire until it ran into a timber type change.”

In both fires, crews worked to protect homes.

“We had an air tanker dropping retardant on this fire. It did save some structures,” Murphy said of the Black River Falls blaze. “This is a fire you can’t do much with at all. Get out of its way, evacuate people, and then attack it when it gets into the timber type change, or during the evening hours, if it slows down.”

Glover said the Ishpeming Township Volunteer Fire Department was the first on the scene of the Island Lake Road Fire.

“They were fighting the fire, they needed some help, they contacted mutual aid,” Glover said. “As soon as they realized they weren’t going to go into the wildland fire, they switched to structure protection.”

Along with the efforts of these Ishpeming Township crews to protect lives, homes and property, fire crews from Richmond, Champion and Humboldt townships, along with the City of Negaunee responded.

“It’s very likely these responding brave firefighters held the memories of the devastating Black River Falls Fire within them as they raced to this new fire in the same area,” said John Pepin, DNR deputy public information officer. “They did a tremendous job on structure protection while our DNR crews worked to battle the wildfire.”

DNR fire officials lauded the actions of the local fire departments, law enforcement and EMS personnel, which aided in evacuations in both fire incidents.

“It was a very stressful situation and no one got hurt,” Murphy said. “The problem on 581 is it is a narrow county road and with people evacuating, and other people trying to see what is going on, it makes the area an extreme safety hazard for fire suppression and evacuation forces.” 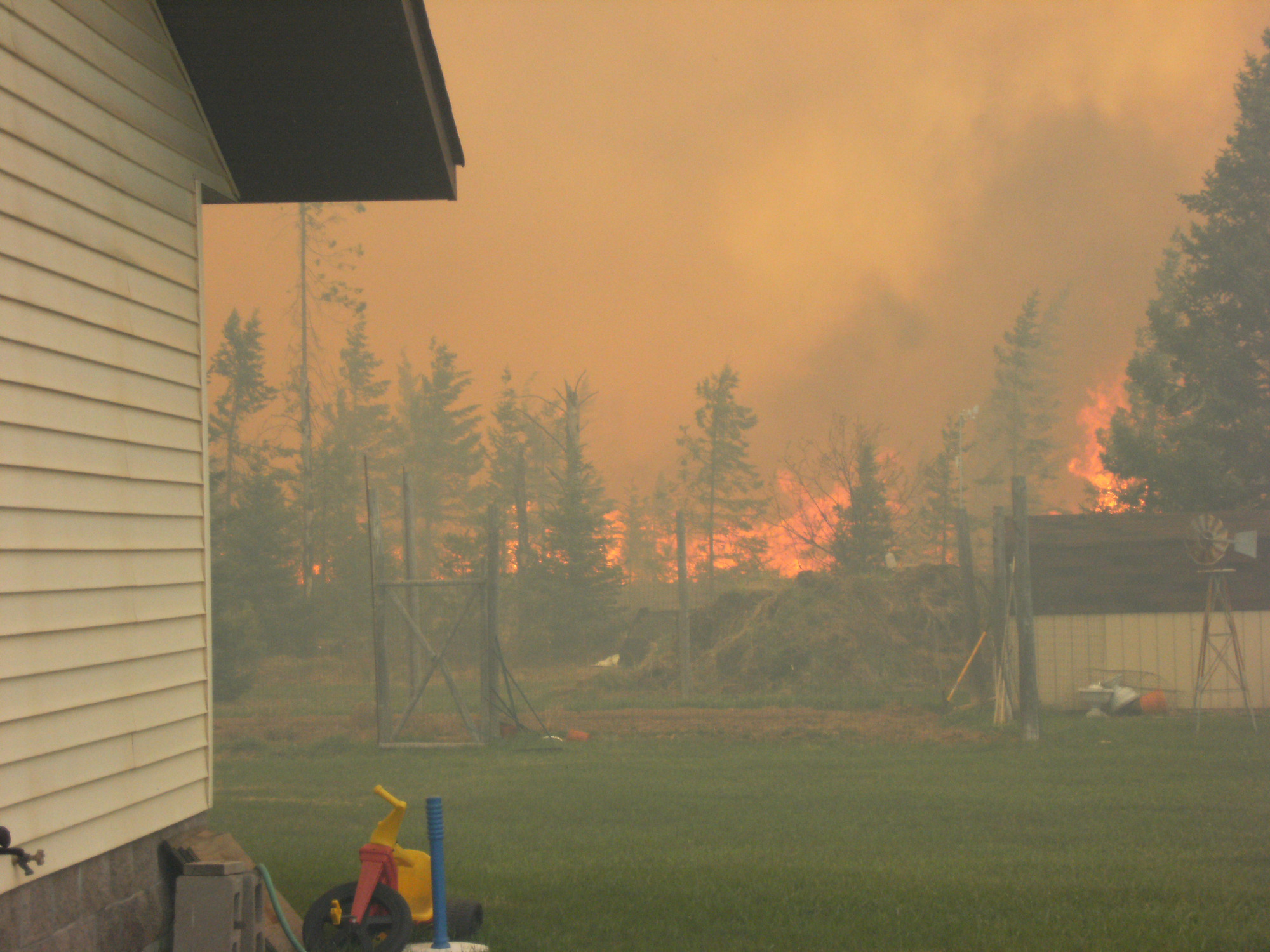 Power poles and lines were coming down during the Black River Falls Fire, and large propane tanks were venting off, creating huge safety concerns, Murphy said.

“When a fire moves this fast, it is hard to commit people even on the flanks, due to not knowing what that fire is doing,” Murphy said. “Air patrol was focusing on the head of the fire and the evacuations. We didn’t have good eyes on the flanks of the fire until later in the evening.”

Glover also lauded the efforts of Central Dispatch operators, who play a very important role in guiding resources to all facets of these emergency situations.

Murphy said he doesn’t think fire crews could have done anything differently on the Black River Falls Fire.

“We had beefed up the staffing at the Ishpeming DNR office and the short team (one of five incident command teams in Michigan) was on standby at the ICC,” Murphy said. “When Ishpeming DNR responded to the fire, it was within 10 to 15 minutes, and once on scene there was no stopping that fire the way the weather conditions were.”

Aerial photos from the Island Lake Fire still show the area burned years earlier in the voracious Black River Falls blaze, which was slowed and put down by fire crews and, eventually, welcomed rainfall.

The fire was 98 percent contained by the morning of May 22.

Since the time of the Black River Falls Fire, some residents have educated themselves on fire-wise techniques to better protect their homes from fire. Check out some of these tips for yourself at: http://www.firewise.org/?sso=0 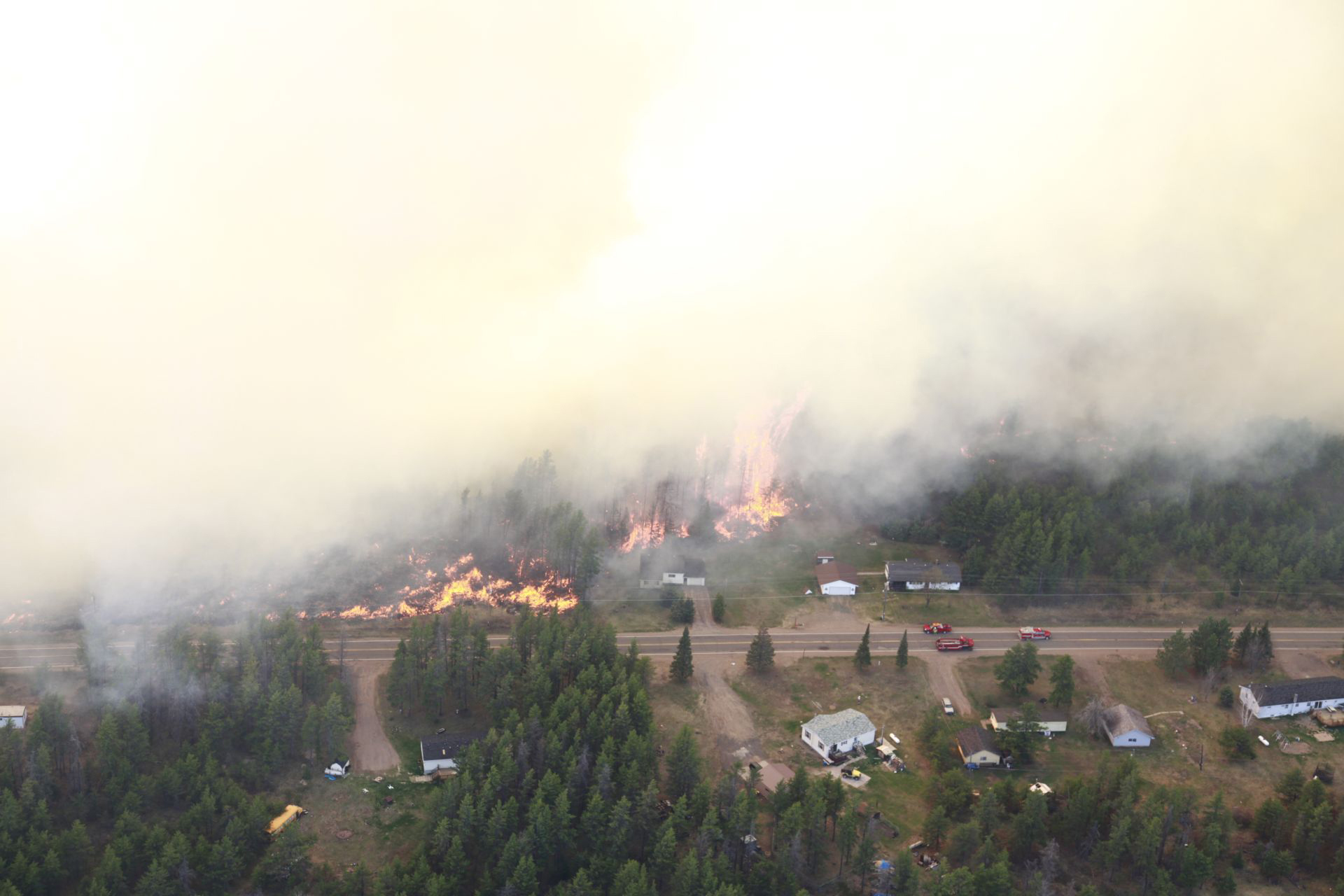 “The Island Lake Road Fire may have been a little smaller if we were there within 10 or 15 minutes,” Murphy said. “But, we would have still had to be careful committing resources (people and equipment) into a jack pine stand, especially with head fire going through it and torching out single trees.”

Murphy said when jack pine — which is well-adapted to fire with tightly-closed cones that open and release their seeds during heat and fire — is ready to burn, it will burn aggressively, no matter what fire suppression resources are thrown at it.

“May is the time jack pine and red pine burns the best. Low needle moisture, and studies are now saying that, the density of the needles plays a factor in flammability,” Murphy said. “The starches, sugars, fats that the needles are taking up from the soil increase needle mass, which increases flammability in conjunction with the low moisture.”

House: The Black River Falls Fire rages just beyond the backyard of a home in Ely Township in Marquette County.

Map: A map shows the locations of the Black River Falls and Island Lake Road fires.

Smoke: Smoke billows up above the trees from the Black River Falls Fire.

Blueberries: Wild blueberries are at home in the jack pine ecosystem.

Chipmunk: A chipmunk sits on the branch of a jack pine tree.

Cones: Green jack pine cones along a branch are shown.