If any creatures ever needed better public relations, it would be snakes.

They have been vilified since the earliest of Bible tales, and their overall reputation hasn’t improved markedly since.

But there are plenty of people who have more respect for snakes – especially those species not well-regarded.

In fact, Michigan has become an important laboratory for the study and preservation of one of them, the eastern massasauga rattlesnake, the only venomous viper that inhabits the state.

Massasauga rattlesnakes were listed as a federally threatened species under the Endangered Species Act in 2016 and are thereby protected animals. 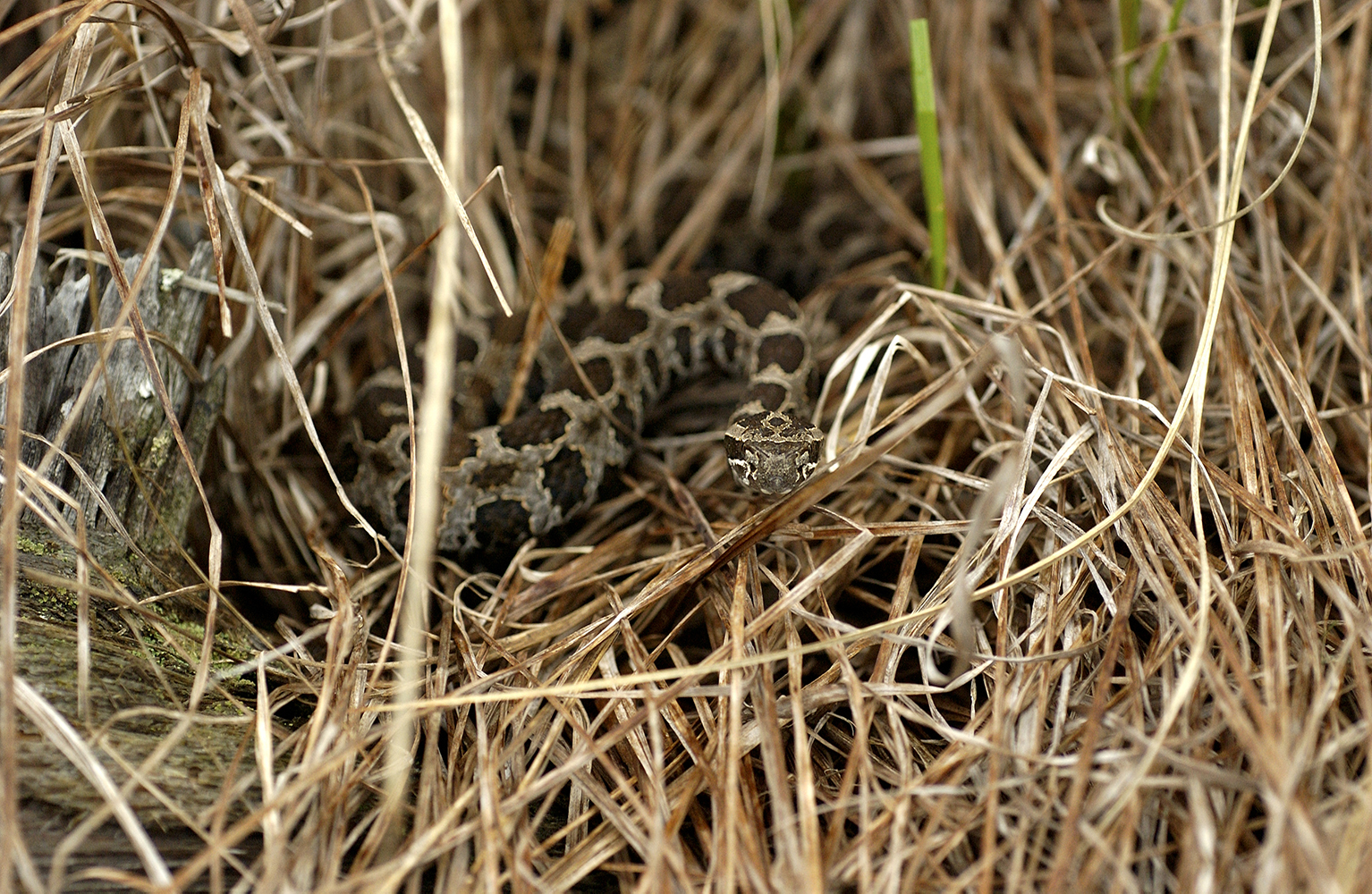 By rattlesnake standards, massasauga rattlers are small, averaging about 2 feet long as adults, reaching a maximum of about 30 inches.

The term “massasauga” means “great river mouth” in the Ojibwe language and was likely given to these snakes because of the places the pit vipers are found.

They inhabit wetlands and feed upon small mammals such as mice and voles, frogs, and other snakes. They are ambush predators, remaining motionless and striking when they detect prey through heat, sound, motion or odor. They inject venom that destroys tissue and incapacitates the prey.

Eastern massasaugas range from southern Ontario to Missouri and from central New York to eastern Iowa. There are a couple of subspecies found in the American southwest and into Mexico.

“Massasaugas are rare in Michigan, though more common than in most other parts of their range,” said Tom Goniea, a fisheries biologist and herptile expert with the Michigan Department of Natural Resources. “There are records of their existence in every county of the Lower Peninsula.

Check out a cool DNR video on massasauga rattlesnakes at: https://www.youtube.com/watch?v=-PFnXe_e02w

“They’ve never been found on the mainland of the Upper Peninsula, though they have been found on Bois Blanc Island, which is in Mackinac County,” Goniea said. “Like all reptiles and amphibians, they were once more widespread and numerous throughout the state than they are today.”

Habitat destruction and persecution have led to their decline. 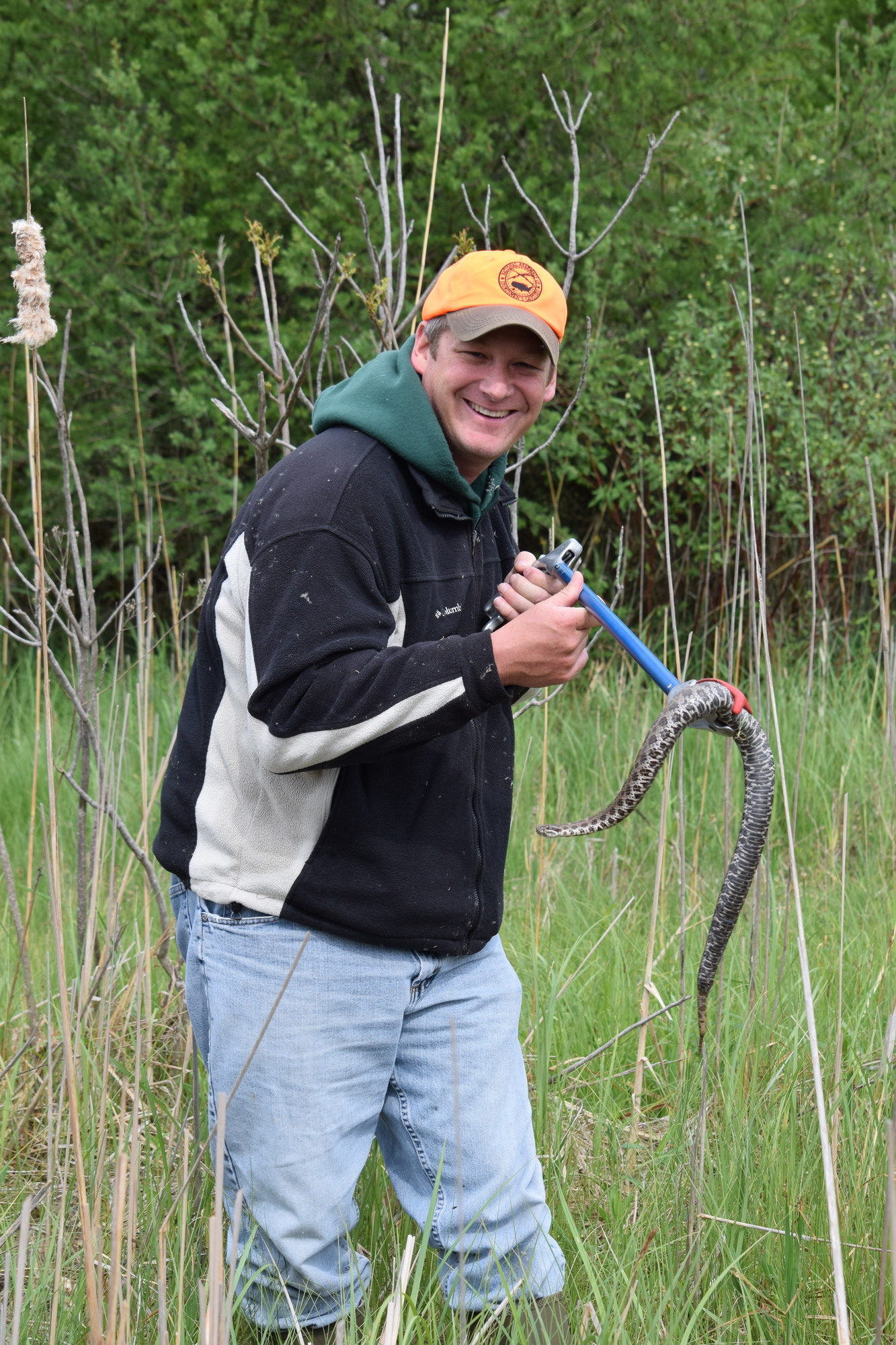 not a particularly aggressive animal. In my 14 years as herptile specialist with the DNR Fisheries Division, I’ve averaged being notified of less than one bite a year.”

Rattlesnake bites, while rare in Michigan, can and do occur. Many bites are the result of people handling them, though people walking though tall grass in rattlesnake habitat near and around wetlands without adequate footwear or long pants could potentially be bitten.

Snakebites are less likely to occur when following some basic safety precautions. Anyone who has been bitten should seek immediate medical attention.

“They can only strike about one-third to one-half their body length, which for a typical Michigan rattlesnake is 8 to 15 inches, so a person has to get really close to be in any danger,” Goniea said. “They are not going to lunge out and bite you from several feet away.”

There are no records of fatalities in Michigan since the post-World War II era that Goniea knows about.

Other snakes are often misidentified as massasaugas.

“Probably 95 percent of the calls we get from people who are sure they have a massasauga are verified with pictures as something else,” Goniea said.

Much of the focus of massasauga rattlesnake study in Michigan is at the Edward Lowe Foundation property in Cass County, where a viable population of the creatures inhabits the wetlands.

Mike McCuistion, vice president of physical resources at the foundation in Cass County, said staffers have found dead rattlesnakes on the roads of the property over the years, and because “conservation is part of the foundation’s charter,” the foundation decided to investigate them.

The foundation engaged a student studying reptiles to survey the area. He found one.

Later, a graduate student's research involved studying how fire – such as controlled burns – impacted the snakes. He used the Lowe property as his control (non-burned) area, and he found a number of the rattlesnakes.

That information allowed the foundation to conduct controlled burns without affecting the snakes.

The presence of the rattlesnakes inspired the foundation to get involved with the snake’s Species Survival Plan. The plan, largely a function of zoos and aquariums, is sort of an insurance policy for species – should they ever disappear.

Zoos that have massasauga rattlesnakes have been selectively breeding them for genetic diversity. These zoos would have a population of the snakes available.

The Lowe foundation agreed to host the annual meeting of the Species Survival Plan nine years ago in exchange for team’s cooperation in surveying the grounds annually for the snakes.

“The nice thing about this population is that it’s centrally located in massasauga range,” McCuistion said.

Over the course of the last seven years, the surveyors have identified more than 800 individual massasaugas on the property, with a stable population of about 150 adults.

Specimens are collected, aged, sexed, measured, weighed and photographed. Adults are implanted with PIT (passive integrated transponder) tags and all are returned to where they were found. The tags identify the snakes individually.

Penny Felski, herptile manager at the Buffalo Zoo and a member of the Special Survival Plan team, has been on every survey at the Lowe property since they started.

“The Buffalo Zoo has been working with this species since the 1960s, but our first successful breeding was in 2012,” Felski said. “It took a while to figure out the husbandry.” 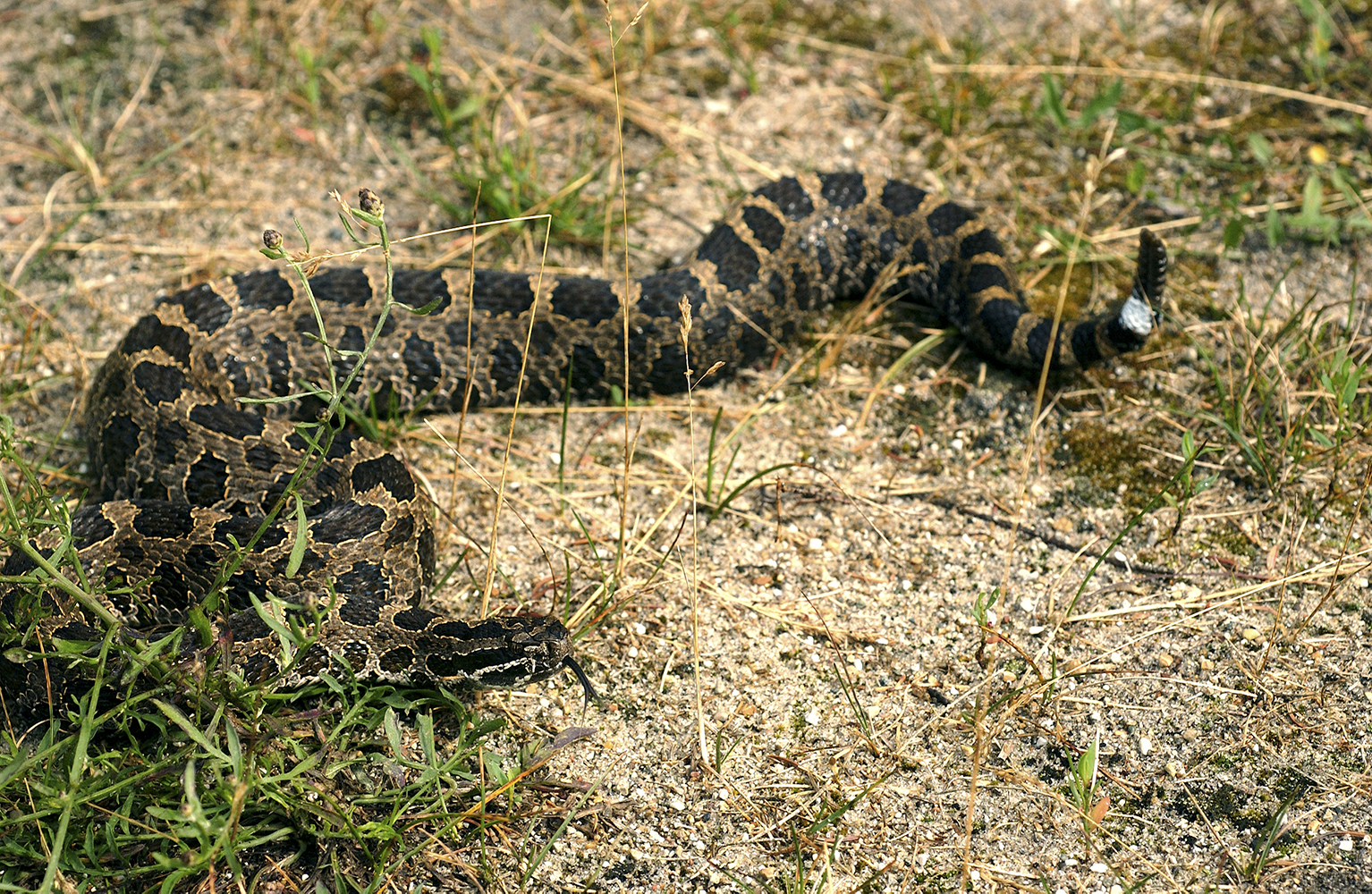 Essentially, when potential mates are selected, the snakes are introduced in the fall and kept together until breeding has been witnessed. Young are born live the next summer. The female at the Buffalo Zoo has produced 13 offspring over the years. All are now at other zoos.

Eric Hileman, who recently earned his doctorate degree from Northern Illinois University for his work on eastern massasaugas and is now a quantitative biologist at Trent University in Ontario, said roughly 70 percent of adult massasaugas survive annually, but only 38 percent of newborns (neonates) survive their first year.

“I think freezing over the winter is the big problem,” Hileman said. “They don’t know how to do it.”

Unlike many other rattlesnakes, massasaugas hibernate alone, often using crayfish burrows for hibernacula.

Hileman said massasaugas have been known to live up to 20 years in captivity, which is up to 30 percent longer than they live in the wild.

For more information on the threatened status of the massasauga or for frequently asked questions about the listing, please visit the US Fish and Wildlife Service massasauga information page at www.fws.gov/midwest/Endangered/reptiles/eama/index.html

To report sightings and learn more about the massasauga, please visit the Michigan DNR’s page on the species at Eastern massasauga.

Learn more by about Michigan's snake species by watching our "60-Second Snakes" videos at https://www.youtube.com/watch?v=Qz5W-co6itw&index=2&list=PLAt8-P23ZJgvCQGGbnCtdUfRYbqiws-F6.

Habitat-1 and Habitat-2: Massasauga rattlesnakes are found in wetland areas in Michigan. The species has been recorded in every county of the Lower Peninsula and only Mackinac County in the Upper Peninsula.

Rattlesnake-1, Rattlesnake-2 and Rattlesnake-3: The massasauga rattlesnake is Michigan’s only venomous snake. It is protected as a federally threatened species under the Endangered Species Act.

Stick: Tom Goniea, a fisheries biologist and herptile expert with the Michigan Department of Natural Resources, holds a massasauga rattlesnake with a snake stick.