In a quiet, out-of-the-way corner of Michigan’s Upper Peninsula, down a narrow, winding, one-lane road, lies a unique spot whose significance you might not guess from its secluded surroundings.

Peninsula Point, at the end of the Stonington Peninsula in Delta County, offers spectacular views of Lake Michigan from atop its lighthouse, a scenic place to enjoy a walk along the beach or a picnic, and excellent birdwatching, with more than 200 species of birds recorded there.

Then there’s the maritime history – the lighthouse, which was built in 1865 and once guided ships carrying iron ore and other products, is on the National Register of Historic Places.

But what Peninsula Point is most known – and visited – for is its connection to the monarch butterfly.

“Just as the Peninsula Point lighthouse guided ships on Lake Michigan, the Stonington Peninsula guides monarch butterflies as they begin their 1,900-mile migration south to their wintering grounds in the Sierra Madre Mountains of Mexico,” reads a sign that greets visitors. “In the fall, thousands of monarchs can be seen here, waiting for favorable conditions before they cross Lake Michigan.”

While the chance to catch the majestic sight of multitudes of monarchs boosts tourism by drawing flocks of visitors to the area, the site is even more important for its contribution to monarch butterfly research and conservation. 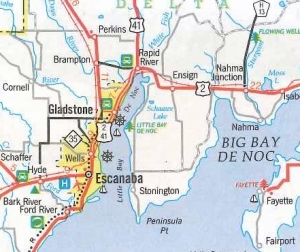 “Peninsula Point is one of only a very few places in North America where monarchs can be viewed migrating in great numbers,” says the sign at the lighthouse, part of Hiawatha National Forest and owned by the U.S. Forest Service. “Because it is so unique, the Forest Service, together with Wildlife Unlimited of Delta County and many volunteers, have been conducting research since 1994, making it the oldest data set on the monarch in North America.”

Run exclusively by volunteers, the Monarch Research Project at Peninsula Point includes migration census monitoring, during which volunteers also tag butterflies as part of the national Monarch Watch Program. An annual monarch migration census is conducted in only one other location in the U.S., Cape May, New Jersey.

Monarch research at Peninsula Point also includes participation in the Monarch Larva Monitoring Project, coordinated by the University of Minnesota. The protocol developed at Peninsula Point, one of the project’s first sites, has been used at other locations across North America.

“The Monarch Project on the Stonington Peninsula began in 1994, when a Forest Service volunteer noticed that there were a lot of monarch butterflies passing through Peninsula Point during later August and the month of September,” said Sue Jamison, who coordinates the work of the volunteers who collect data on monarch larva and eggs at Peninsula Point for the Monarch Larva Monitoring Project.

“Each year we try to have volunteers check daily during those weeks to look for increased numbers of monarchs congregating at the lighthouse at the end of the peninsula.” 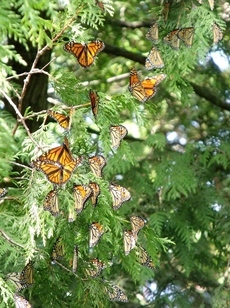 The project is currently without a volunteer coordinator for the fall migration census and tagging – according to Janet Ekstrum, Forest Service wildlife biologist for Hiawatha National Forest, Rapid River Ranger District – and may not have the capacity to do regularly scheduled migration monitoring this year.

In previous years, as many as 21 monarchs tagged at Peninsula Point have been recovered in El Rosario, Mexico, almost 2,000 miles from the Stonington Peninsula.

Monarchs are unique in that they are the only butterfly known to make a two-way migration, similar to birds, because they can’t survive cold winters in northern climates.

“Using environmental cues, the monarchs know when it is time to travel south for the winter,” according to the U.S. Forest Service website. “Monarchs use a combination of air currents and thermals to travel long distances. Some fly as far as 3,000 miles to reach their winter home.”

The eastern population of North America’s monarchs goes south to the same 11 to 12 mountain areas in Mexico from October to late March.

“Monarchs traveling south congregate on peninsulas. The shape of the peninsula funnels the migrating butterflies,” says the Forest Service website. “At its tip, the monarchs find the shortest distance across open water. They congregate along the shore to wait for a gentle breeze to help them across.”

Wind also plays a role in the volunteers’ monitoring efforts.

“We check the winds, as monarchs do not like to fly over water so they will leave with a north wind to fly over to Door County, Wisconsin,” said Jamison. “Peninsula Point is the southernmost point for monarchs in our area to fly over Lake Michigan.”

The Monarch Research Project at Peninsula Point, which depends on financial support from local organizations like Wildlife Unlimited of Delta County and the work of volunteers, collects data that is sent to various universities and has resulted in several research publications.

“It’s a neat thing to do if you’re retired and all you do is golf,” said Rosie Spindler, who has volunteered to monitor larva at Peninsula Point for the past five years. She became interested in monarch conservation after a trip to visit butterfly preserves in Mexico where monarchs winter.

Watch a video about monarch butterfly migration and monitoring at Peninsula Point. 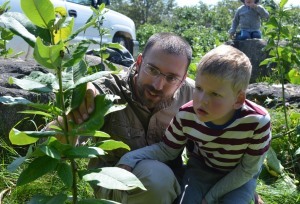 For those who don’t live in the central U.P., there are other opportunities for citizen scientists to get involved in studying monarchs – learn more at the Monarch Joint Venture website. Michigan residents also can help inform conservation decisions in the state by reporting monarch sightings at the Journey North web page.

The eastern population of monarch butterflies has declined by 80 percent over the last 20 years due mainly to habitat loss.

And this year’s measurement of the eastern monarch overwintering population in Mexico showed a 27 percent decrease compared to last year, likely due to an extreme winter storm.

Efforts to restore and maintain monarch habitat can help monarchs rebound and reverse the population decline.

“Because of the tremendous migration they make, monarchs need a variety of habitats,” said Dan Kennedy, endangered species coordinator for the Michigan Department of Natural Resources. “In the summer, they lay their eggs on milkweed because that’s the only plant their caterpillars will eat.

“Monarchs also need habitat to overwinter in, not to mention habitat where they can stop and refuel along the way. They are very active insects and require a wide variety of flowering plants to provide the food they need to survive and make their long journey.”

Grasslands, vitally important to many species, including monarchs and other pollinators, have become increasingly rare. 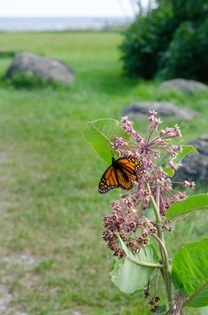 “Making sure pollinators have habitat that supports milkweed and other native, flowering plants is important to preserving these key species,” said Kennedy.

Through several habitat enhancement projects, the DNR – along with many partners, organizations and volunteers – is working to increase habitat for monarchs and other pollinators in Michigan.

“Because of the critical role these insects play in the ecosystem, as well as people’s lives, it is up to us to help keep these pollinator populations abundant and healthy,” Kennedy said.

For example, in southern Michigan, the DNR is working to restore and enhance grassland and pollinator habitat at the Shiawassee River State Game Area in Saginaw County and in Barry County’s Barry State Game Area.

In addition to the DNR’s efforts, many other organizations are supporting projects to improve pollinator habitat in Michigan. In June, TransCanada partnered with the Save Our Monarchs Foundation and many volunteers to plant 6,000 native wildflowers around TransCanada’s Woolfolk Gas Plant in Big Rapids, Michigan.

Currently, 4,000 acres already are being utilized as pollinator habitat. As part of their Pollinator Pathway Initiative, the organizations will continue their plan to seed an additional 7,000 acres across other TransCanada rights-of-way with native wildflowers this fall.

"Our existing assets align remarkably well with the monarch migratory route between Mexico and Canada,” said Brad Stermer, environmental specialist, operations and engineering for TransCanada. "Through our environmental partnership with Save Our Monarchs we have an opportunity to play a larger role in directly supporting pollinator health over the long term."

Even for those who don’t have a large amount of land, there are ways to create habitat that helps pollinators. More information about creating habitat for monarchs and other pollinators is available on the Monarch Joint Venture page.

Other helpful resources include the U.S. Fish and Wildlife Service's steps for building a pollinator garden and the Michigan State University Extension’s Pollinators & Pollination page, which also offers information on gardening for pollinators.

Find out more about ways to help pollinators in Michigan by visiting mi.gov/wildlife and clicking on the Monarchs in Michigan box.

Lighthouse: Visitors can climb the 40-foot, circular staircase of the historic Peninsula Point lighthouse in Delta County to get a panoramic view of Lake Michigan.

Monarch2: Sunlight shows through the wings of a monarch butterfly Wednesday at Peninsula Point in Delta County. The site is an important stopover point in the monarchs’ long flights to Mexico.

Monarch3: A monarch butterfly at Peninsula Point in Delta County Sunday. Monarchs, in large migratory numbers, have not yet convened at the point this year.

Volunteer: A volunteer releases a newly tagged monarch butterfly. As many as 21 monarchs tagged at Peninsula Point in Delta County have been recovered in El Rosario, Mexico, almost 2,000 miles away. Photo credit: Bob Nichols.