For many people, the opportunity to see a Michigan black bear in the wild is an amazing experience.

Black bears are Michigan's only bear species. These animals prefer large hardwood or pine forests, intermixed with wetlands, and they can be colored black, brown or cinnamon.

Males live in areas that can be larger than 100 square miles, while females - which give birth to an average of two to three cubs every other winter - stay in smaller areas ranging from 10 to 20 square miles. Adult female black bears typically weigh 100 to 250 pounds.

Bears have sharp claws on their padded feet, used for climbing trees and searching for food, like tearing open rotted stumps and trees for insects.

Many wildlife watchers have a natural curiosity about bears, and the chance to see bears from a safe distance, especially when a sow is accompanied by cubs, often produces moments most people don't soon forget.

Anglers, campers, hikers and others enjoying the outdoors in Michigan may also encounter a black bear. Typically, bears will run or walk away from humans if they become aware of their presence.

However, in some instances, bears do not run. In these cases, an adult male Michigan black bear - which can weigh more than 400 pounds and stand 5 feet tall - can present an imposing obstacle.

"When bears stand their ground, people should do the same thing," said Kevin Swanson, a wildlife specialist with the Michigan Department of Natural Resources' bear and wolf program. "In these kind of encounters, you should make loud noises and back away from the bear slowly, giving the bear plenty of room to leave the area. Do not run from a black bear or play dead if one approaches."

In rare cases, black bears can attack. If they do, fight back with a stick, a backpack, similar available items, or your bare hands.

According to the North American Bear Center in Ely, Minnesota, black bears have killed 61 people across North America since 1900. Bear experts there say your chances of being killed by a domestic dog, bees or lightning are vastly greater. 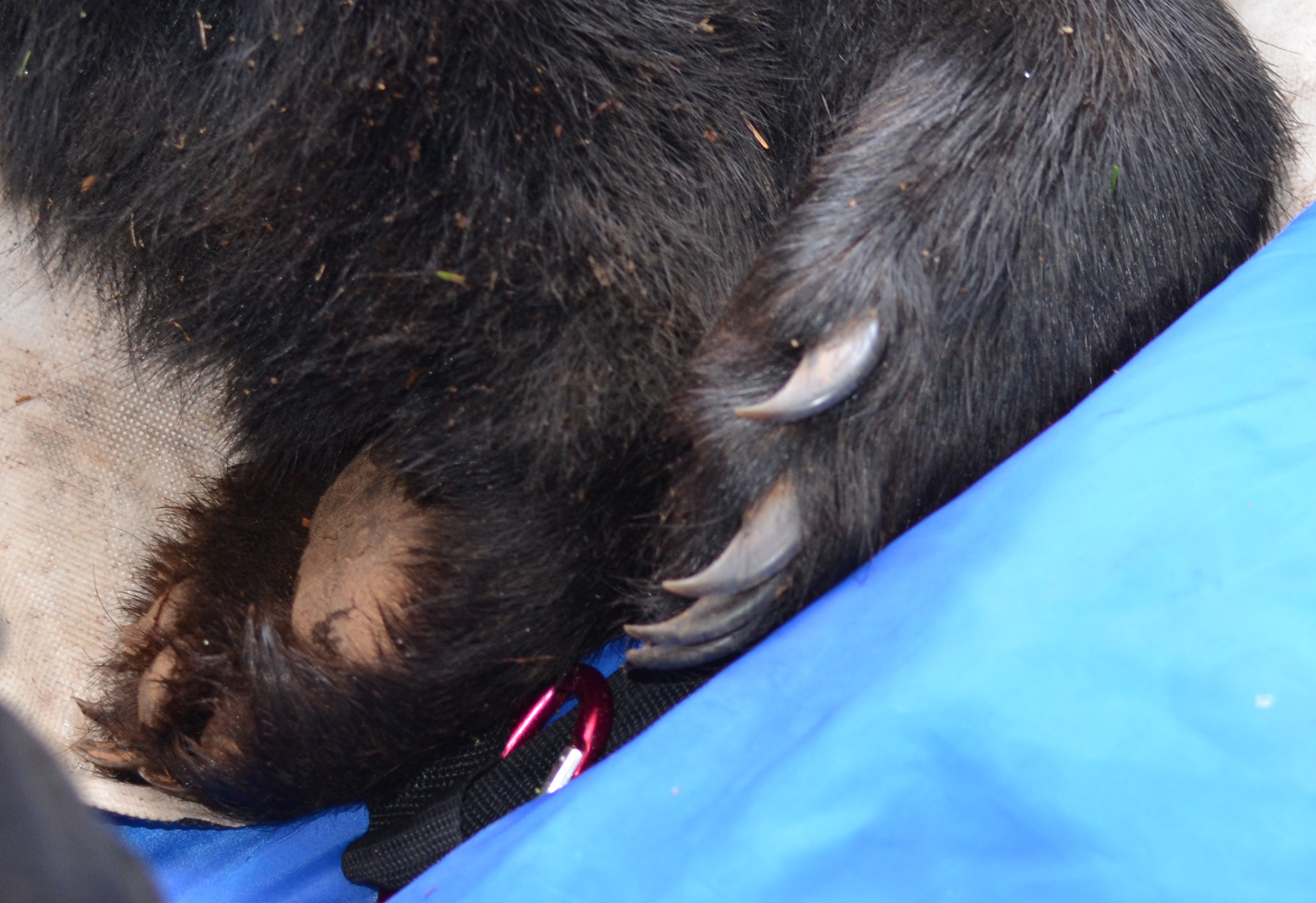 In Michigan, while cases of black bear attacks - like that of a 12-year-old girl who was attacked and injured while jogging at dusk in Wexford County in 2013 - remain rare, reports of bear nuisance complaints are relatively common.

DNR bear nuisance complaints in the Upper Peninsula tallied a bit over 100 for each of the past two years, down from the peak of nearly 250 in 2004.

However, in the northern Lower Peninsula, bear complaints in 2016 numbered over 200, a new record for the region. Previously, complaints had peaked in 2003 in that part of the state at more than 160.

Many black bear nuisance complaints involve encounters between humans and bears, that were prompted by human behavior.

"Black bears eat plants and animals and seek out a number of different food sources, such as sedge, juneberry, blueberry, acorns, beechnuts, and animal protein that includes insects and occasional deer fawns," Swanson said. "Bears also have big appetites, an excellent sense of smell and can remember the locations of food sources from one year to the next."

Check out a DNR video on black bears. 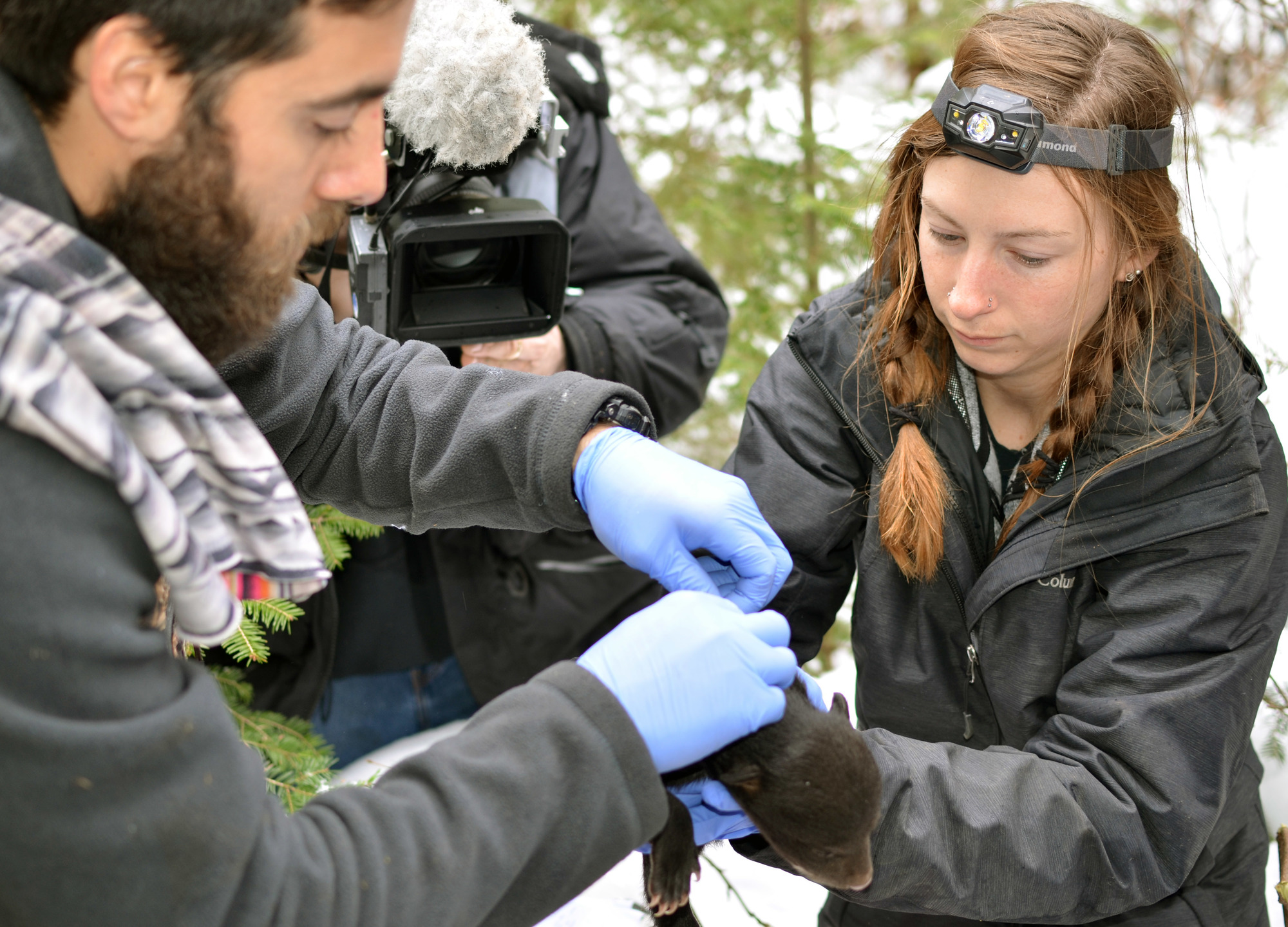 "The best way to avoid issues with black bears is to never feed them," said Brian Roell, a DNR wildlife biologist in Marquette. "It is very important that bears maintain their natural fear of humans. Bear problems are far more likely to occur when bears become used to finding food provided by humans."

A DNR information flier on Michigan black bear details some helpful tips for avoiding conflicts with bears around homes and camps:

There are additional tips for hikers and campers:

"All of us who live and enjoy the outdoors in bear country share the responsibility of not doing things that will intentionally or unintentionally attract bears and create the potential for bear problems," said John Pepin, DNR deputy public information officer. "As human and black bear populations grow in some areas, the possibility of human-bear interactions becomes more likely, making this shared responsibility even more important." 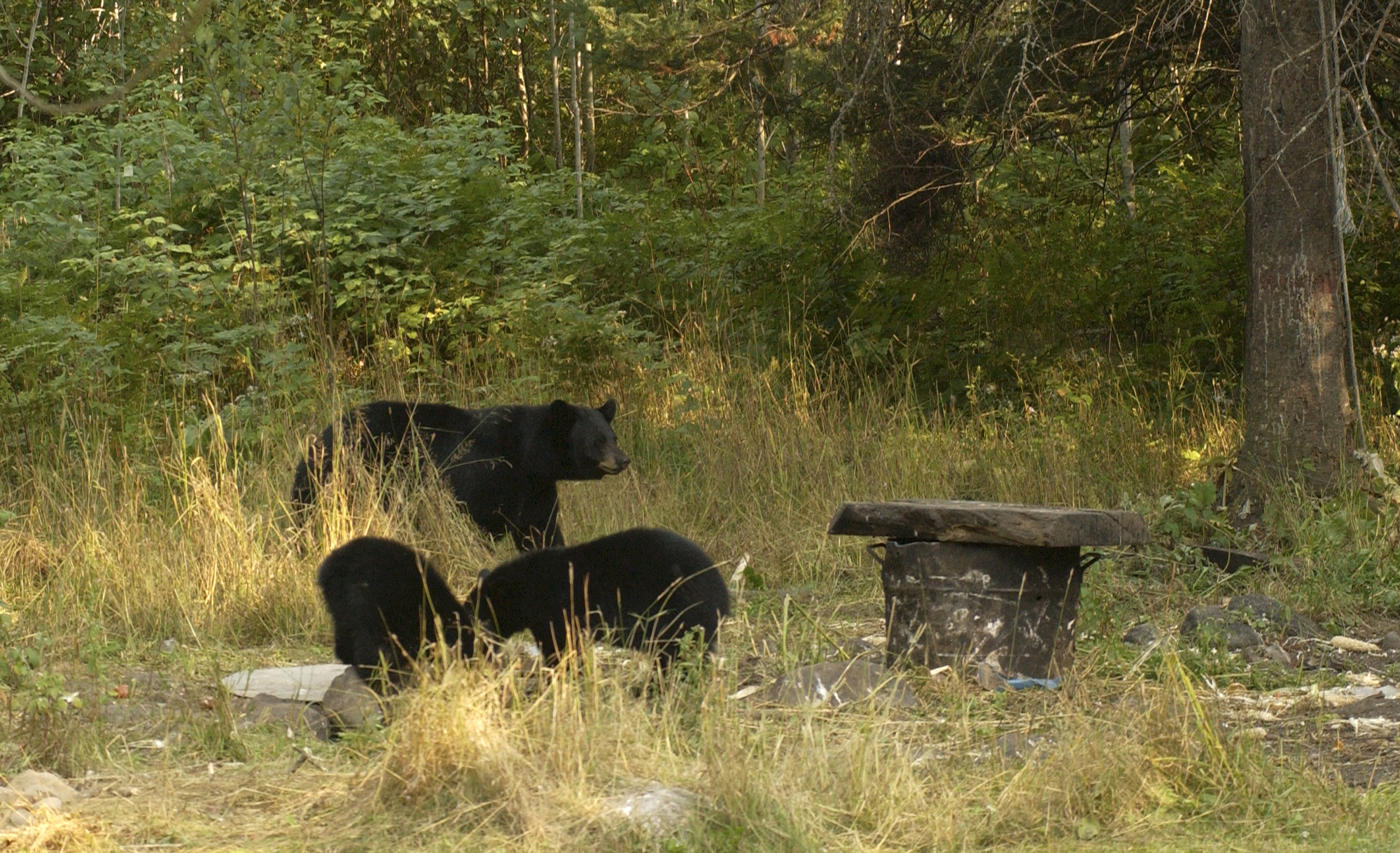 Bear populations throughout Michigan are currently stable or are increasing, depending on region. Bears are found across roughly 35,000 square miles of suitable habitat, mostly in the northern two-thirds of the state. The Upper Peninsula is home to most of Michigan's black bears.

According to the DNR's Statistical Catch-At-Age analysis - which uses bear sex and age data collected since 1992 - bear abundance in Michigan was most recently estimated at a total of 11,811 sub-adult and adult bears.

This estimate includes 9,699 black bears in the U.P. and 2,112 in the northern Lower Peninsula. Those figures were calculated before the 2015 bear hunting seasons.

While the analysis estimates the bear population in the Upper Peninsula has increased about 1 percent since 2000, in the northern Lower Peninsula, bear numbers have risen an estimated 47 percent over that same time frame.

"Due to previous concerns expressed by DNR biologists and a wide array of hunters and bear hunting clubs, license quotas and the bear harvest were decreased significantly beginning in 2012," Swanson said. "The current DNR goal is to increase and then stabilize bear numbers according to how many bears the habitat can support comfortably, without surpassing social tolerance." 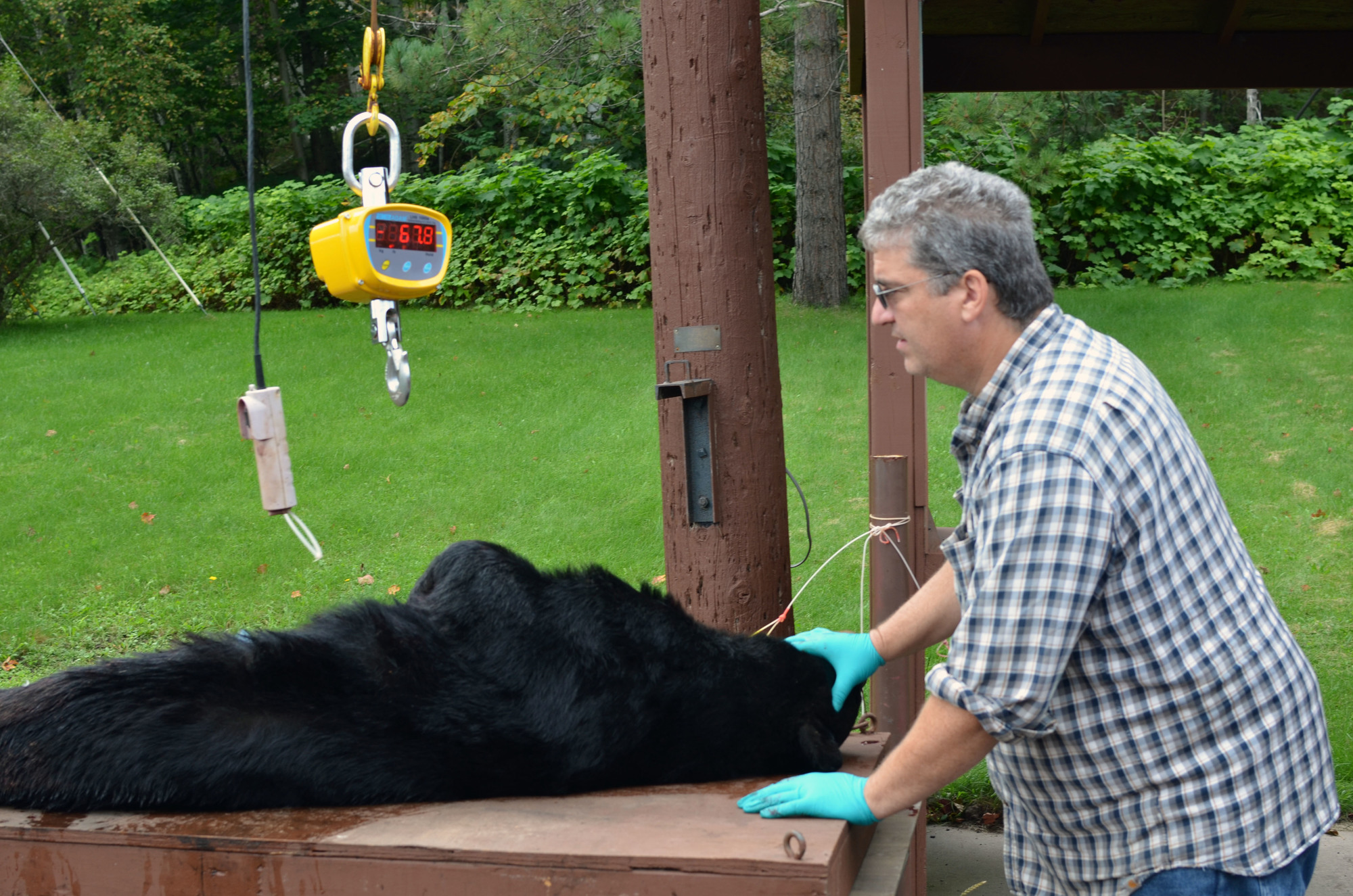 In Michigan, hunting helps keep bear populations at acceptable levels. Bear hunting is a long-standing tradition in the state, enjoyed by those who hunt over bait or pursue bears with dogs.

Bear hunting seasons open across Michigan in September and, depending on the bear management unit, largely continue into October. Some days of the hunt are restricted to bait-only hunting, while bait and dogs may be used during the remainder of the seasons.

Non-resident licenses in Michigan are capped at 5 percent this year, an increase from a previous cap of 2 percent. This year, 310 out-of-state residents were granted bear hunting licenses from the 7,140 issued.

"The U.P. landscape is prime habitat for black bear due to the large connected tracts of forestland that grow over various soil types, which creates abundant food sources and cover for this normally solitary animal," Swanson said. "But a rising population is causing more conflict with people, especially in the northern Lower Peninsula, where bear bluff charges, domestic dog kills and general nuisance complaints are rising." 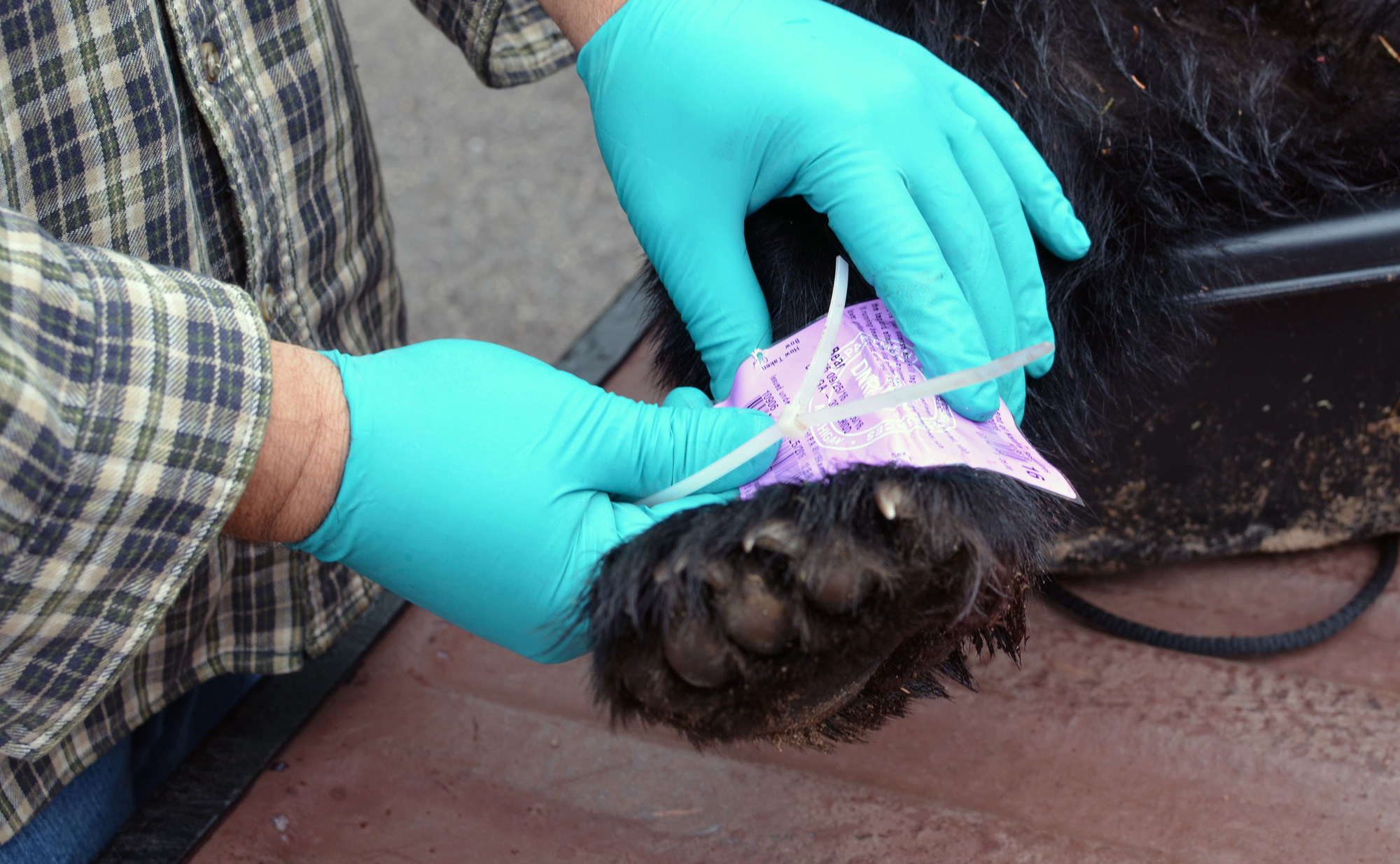 Black bear nuisance complaints in the U.P. become increasingly common in years when natural food sources, like blueberries, are harder to find. However, any bear will take advantage of an easy meal, like seeds from backyard wild bird feeders and household garbage.

"Keeping these potential bear foods safely stored away, especially when bears have been reported in the area, will help minimize negative interactions with black bears," Roell said. "Michigan black bears are fascinating wild animals that should be respected as such, never fed and viewed from a safe distance."

Under Michigan law, black bears can only be killed by a licensed hunter or when human life is in danger. Anyone who is experiencing problems with bears should contact the nearest DNR office and speak with a wildlife biologist or technician for further assistance.

Get more information on Michigan black bears at Michigan.gov/Bear.

Bear: For many people, seeing a Michigan black bear in the wild, like the one shown here, is an amazing experience.

Bears: A sow and two black bear cubs investigate a grassy area where garbage has been left.

Cub 1, Cub 2 and Cub 3: Researchers working on the Upper Peninsula predator-prey study examine a bear cub found in a den with its mother and two siblings in February 2017 in Houghton County.

Tag: A bear tagged at the Michigan Department of Natural Resources check station in Marquette in fall 2016.

Tooth: A bear tooth extracted during a bear check in fall 2016. Wildlife biologists can tell a good deal of information from examining teeth including age, sex, condition and when they might have had cubs.