Mention grouse to most Michiganders and they immediately assume you're talking about ruffed grouse, game birds that thrive in early successional forests - think aspen - and provide much of the romance in upland bird-hunting lore.

But there's another grouse in Michigan that is far less numerous and widespread and is pursued by far fewer hunters. Sharp-tailed grouse are prairie birds, inhabiting grasslands and the neighboring brush, found only in the Upper Peninsula - and mostly on the east end.

While only a relative handful of sportsmen hunt them, they offer a unique upland opportunity to Michigan bird hunters. Michigan also has spruce grouse, which are not hunted.

Sharp-tailed grouse (commonly called sharptails, sharpies or sharps) are mottled brown, tan and white birds that get their name from the shape of their primary tail feathers.

They average about 20 inches in length and weigh in at around 2 pounds when mature. They are common in the western United States and Canada, but are much less so here in Michigan.

"Michigan is the furthest east state where you can hunt sharptails," said Al Stewart, the upland game bird specialist with the Michigan Department of Natural Resources. "We work with a variety of partners - soil conservation districts, private landowners, and the Michigan Sharp-tailed Grouse Association - to maintain sharptail habitat and sharptails so we can maintain a hunting season in this state.

"You'll see them in hay fields and cattle-grazed grassland fields. Sometimes you see sentry birds sitting on top of round hay bales. They like that brushy, fringe edge along grassland areas. Sharp-tailed grouse are an open-land species and much of the Upper Peninsula wants to be trees. One of our challenges is trying to maintain these large open areas."

Sharptails were first documented in Michigan in 1888 on Isle Royale. They were widespread across the U.P. after the logging era, when wildfires opened up the landscape.

They were once more numerous on the west end of the peninsula, where it is assumed they moved into the state from farther west. But sharptail numbers dwindled in the western U.P. as the habitat succeeded to forests, though a remnant population remains on the east side.

State wildlife biologists established sharptail populations in suitable habitat in the northern Lower Peninsula by trapping and transferring birds from the U.P. as well as importing birds from Wisconsin and Alberta, Canada.

They were popular with hunters for many years, but forest regeneration eventually eliminated their habitat in the Lower Peninsula and most of the U.P. By the late 1980s, an estimated 90 percent of the state's sharptail habitat had disappeared, and some biologists worried that the birds were in danger of being eliminated entirely from Michigan. 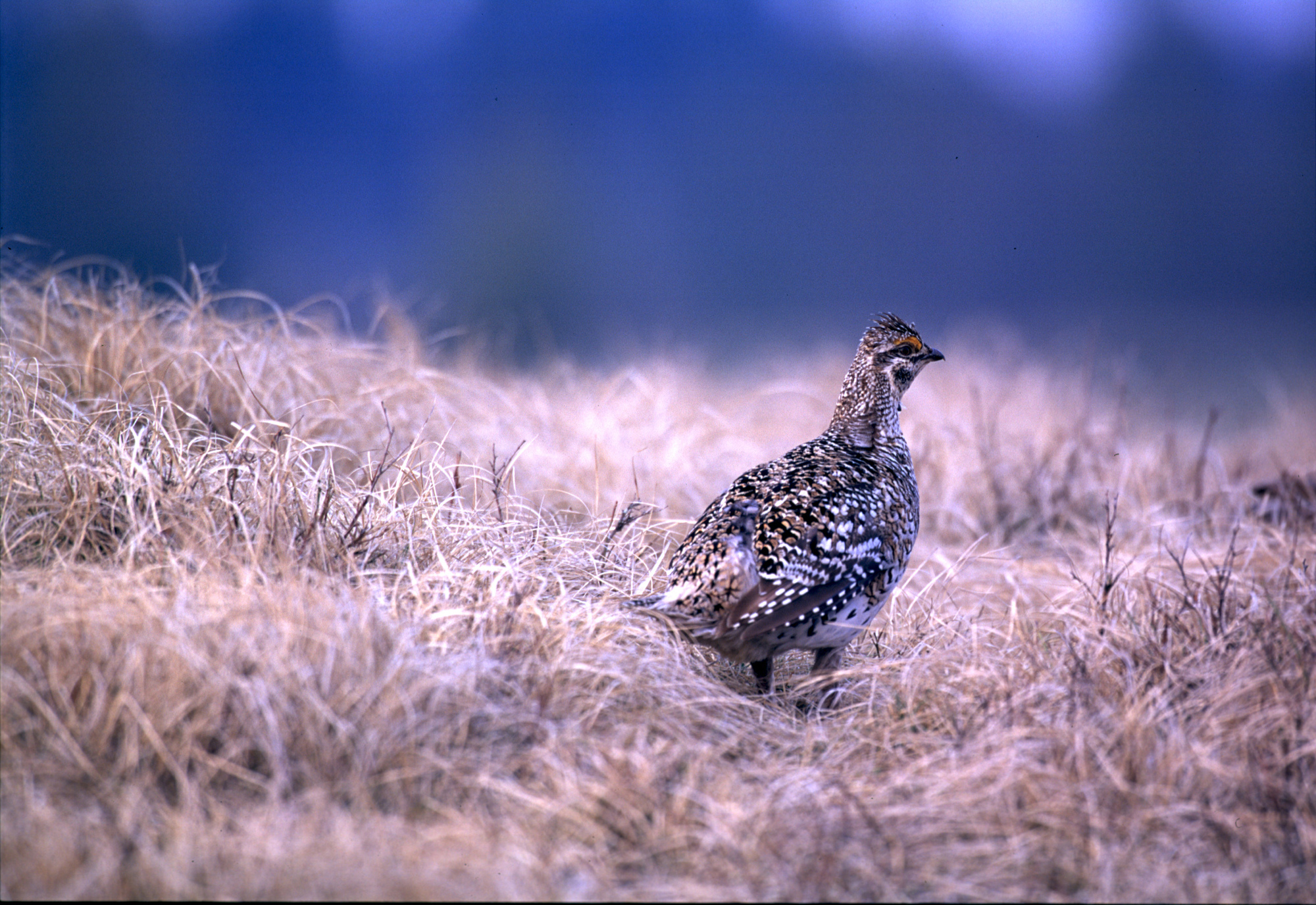 But subsequent surveys, led by DNR research biologist David Luukkonen, found that the birds were more numerous than previously thought. Historically, surveys were conducted on established breeding grounds, which are known as leks.

"We did a radio-telemetry study with Michigan Technological University and found the birds aren't always faithful to one lek," Luukkonen said. "They move around a lot. We not only went to established leks, but we did random samples of other open-land areas. A little more than half the areas we surveyed had sharp-tailed grouse in them. And we surveyed areas multiple times and found out that on any given morning, you'll only detect them about half the time.

"We were pleasantly surprised by the number of birds we found."

After a decade, the DNR re-opened sharp-tailed grouse season in the eastern U.P. in a small area east of I-75. In a conservative approach, the DNR gradually expanded the open hunting area west of I-75. During this time, habitat improved in this western area - largely as a result of wildfires.

Still, few hunters chase them. In the most recently completed survey of sharp-tailed grouse hunters in 2014, an estimated 289 hunters killed 134 birds.

Though there are good populations of sharptails in areas somewhat farther west in the U.P., the DNR has been conservative about expanding hunting opportunities. The counties with the highest population levels are Chippewa and Schoolcraft.

"We're approaching sharptails with a very conservative sustainable management process," Stewart said. "We set our season to correspond to that." 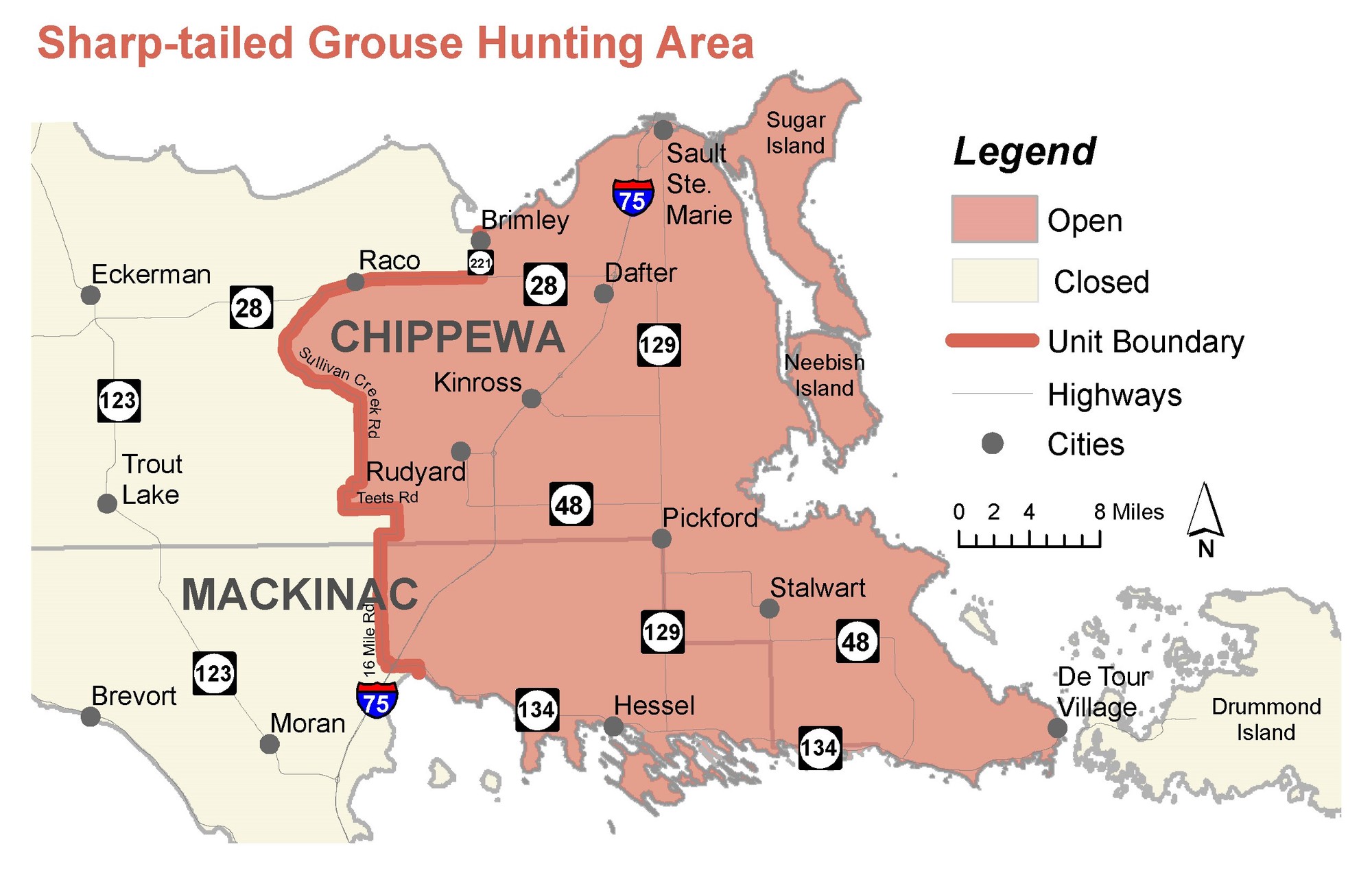 Sharp-tailed grouse season is open Oct. 10-31 in portions of Chippewa and Mackinac counties. Check the 2017 Michigan Hunting and Trapping Digest for details.

Sharptails are challenging to hunt.

"They're fairly wary," Stewart said. "Sometimes when you enter a field, they flush out at the far side of the field. You know how pheasants are wary and wild late in the season? Sharp-tailed grouse are even more wary.

"You won't get a lot of shots at them," he continued. "In your effort to hunt sharp-tailed grouse, you may spend a lot of time walking through pastures and meadows and then, if your dogs go on point, if you get close enough to get within a 20- to 30-yard range of them, you can harvest one.

"In Michigan, they're a trophy grouse."

Hunters may take two sharptails a day and have four in possession, with a season limit of six. Surveys show hunters average about a half a bird per season.

The DNR is anticipating a good season this year.

"We've certainly been seeing birds in the surveys we've done," said Dave Jentoft, the DNR wildlife biologist in Sault Ste. Marie. "I expect it will be a decent season for hunters who are pursuing sharptails in the area.

"It's a unique opportunity for hunters. It's a relatively small area, given the size of the state. There are hunters who come from miles away, even from out of state, to hunt."

Most birds are harvested on private land.

"We have very limited state land that has the habitat on it, but there are some Hunting Access Program (HAP) lands available," Jentoft said.

More information about the Hunting Access Program is available at www.michigan.gov/hap. 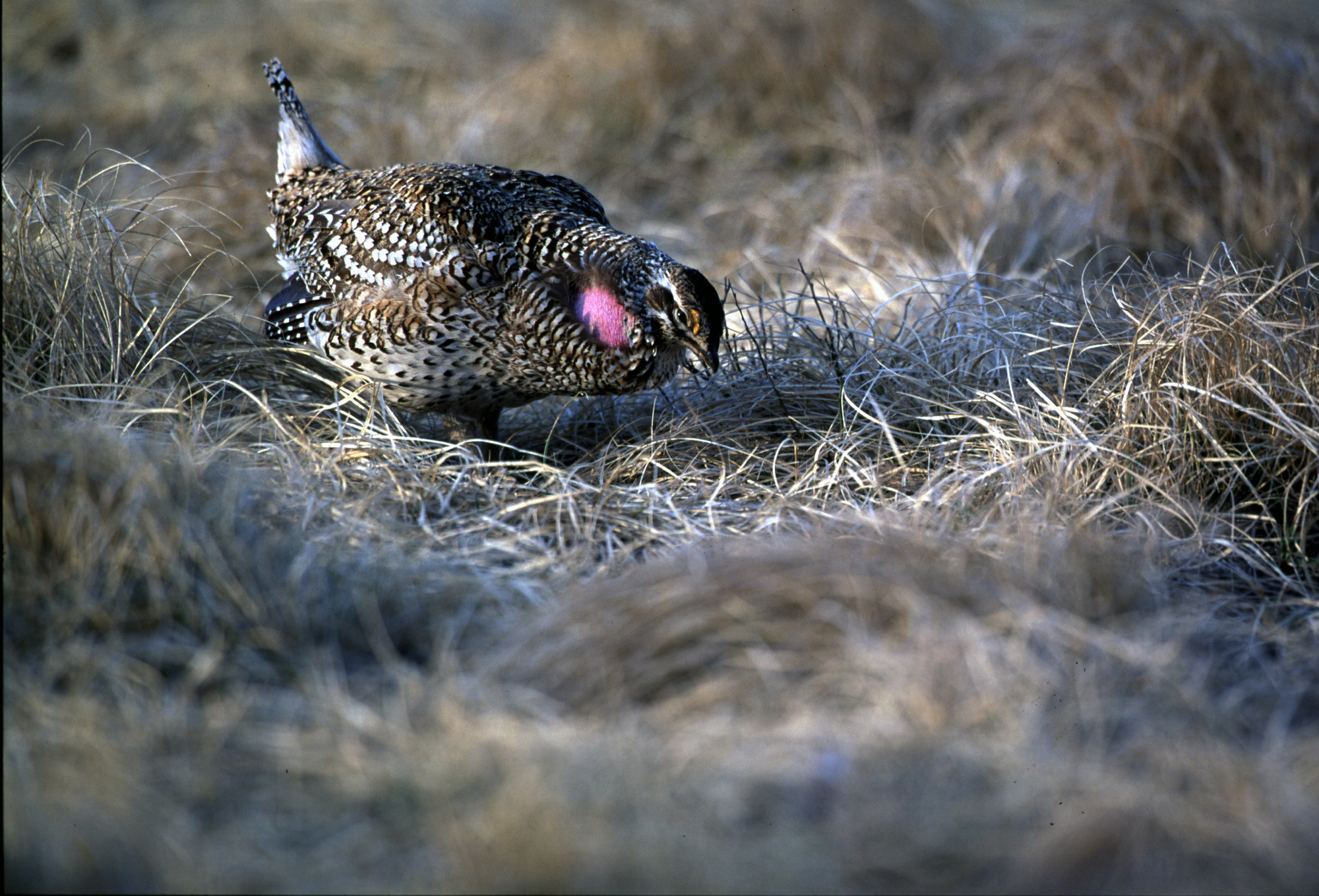 In addition to hunting, sharptails are popular with birdwatchers because of their lavish courtship rituals. On spring mornings, males fly into leks where they dance to attract females.

The birds arch their backs, raise their tails and twist and turn as they stomp their feet, vocalizing and "rattling" - shaking their wing feathers. On quiet mornings, rattling can be heard for half a mile or more.

From their early history in Michigan, to the hunting opportunities of today, as the birds make a comeback in the Upper Peninsula, sharp-tailed grouse are a fascinating species to learn about, see and hunt - a welcome denizen to our wonderful prairie habitats.

To learn more about hunting for sharp-tailed grouse and other Michigan game species, visit www.michigan.gov/hunting.

AuTrain: The AuTrain Wildlife Management Area and Refuge in Alger County is one area where sharp-tailed grouse have traditionally performed spring courtship displays on grassy areas known as "leks."

Grouse 1-3: Sharp-tailed grouse are found in greatest concentrations in the Upper Peninsula in Chippewa and Schoolcraft counties.

Ruffed: Ruffed grouse are a common woodland species in Michigan.

Road: Bobolinks and other grassland bird species often perch in the trees along roads like this at the AuTrain Wildlife Refuge in Alger County./