Michigan is home to a wide variety of spectacular habitat types.

Among these, perhaps one of the most important categories is upland habitat, which offers countless recreation opportunities for the fall leaf peeper, mushroom hunter, birdwatcher, hiker, hunter, beachgoer, camper and others.

Dunes
Michigan boasts 275,000 acres of freshwater coastal dunes – more than any other state in the nation. These dunes were formed 4,000-6,000 years ago as the glaciers that once covered our region melted. 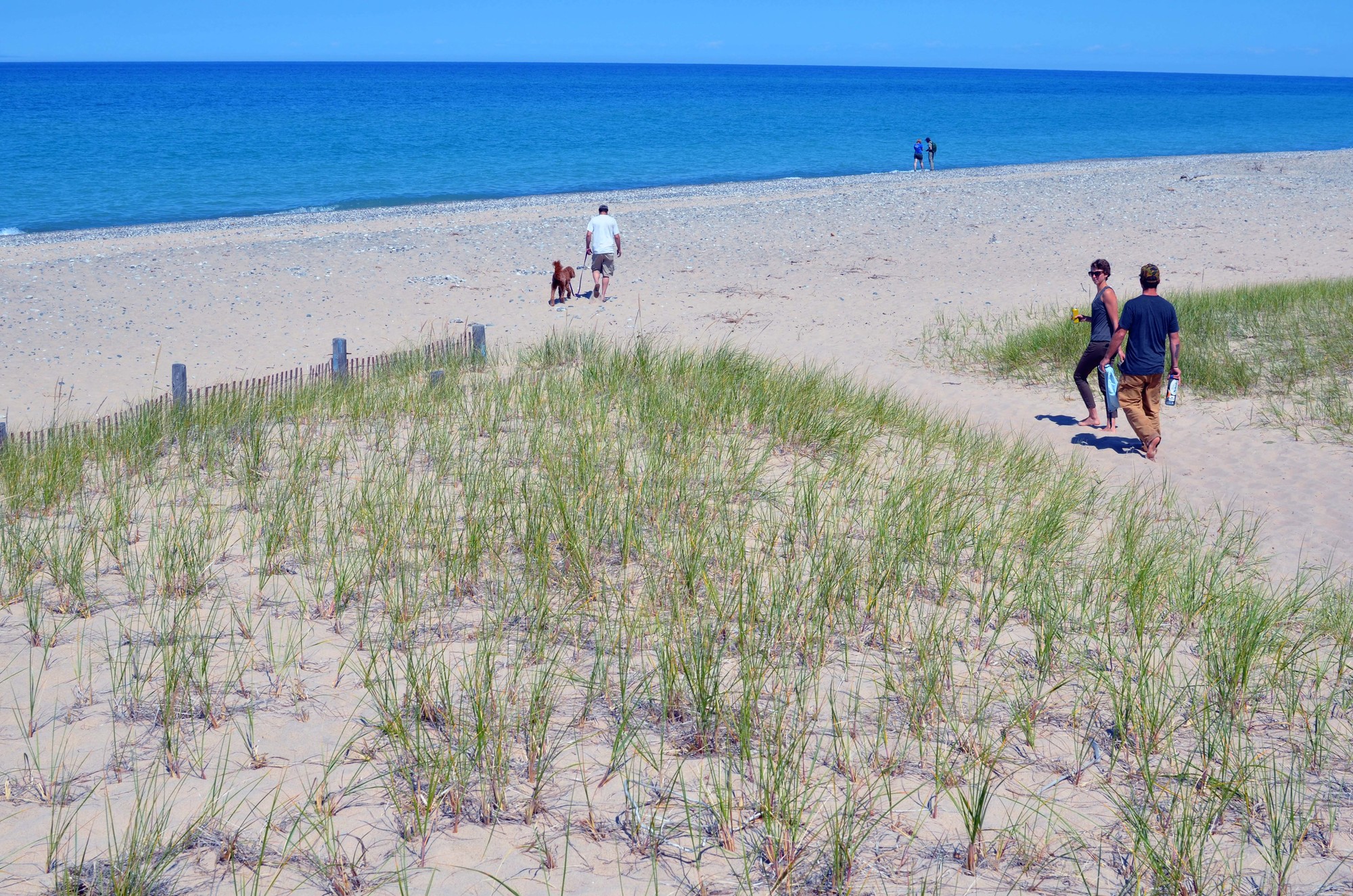 These species face a range of threats.

Pitcher’s thistle, Houghton’s goldenrod, Lake Huron tansy, and the Dwarf Lake iris are threatened and endangered plant species that grow in coastal dunes. They can be easily trampled by recreationists and negatively impacted by coastal development.

The endangered piping plover nests on Michigan’s coastal dunes. These diminutive brown and white shorebirds blend in easily with sandy beaches. The Great Lakes population of piping plovers has declined over the last several decades due to habitat destruction from human and commercial development and human encroachment on the plovers’ nesting grounds. 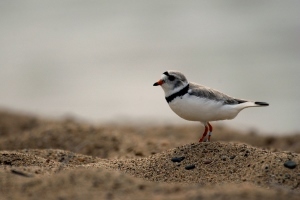 Another factor leading to the decline of the piping plover is the increase of human-tolerant predators like gulls, raccoons, feral cats and skunks.

These ever-changing ecosystems are great to visit for a wide range of recreation, from beachcombing to birdwatching. However, to preserve these beautiful dune communities and the valuable plants and animals that thrive there, we need to take a few precautions.

Deciduous Forests
Michigan’s deciduous forests are characterized by tree species that lose their leaves in the autumn. These forests provide spectacular displays of color in the fall and attract thousands of tourists to the state. In addition, the forest resources industry is an important part of Michigan’s economy.

Four of the most common deciduous forest types in the state are beech-sugar maple forests, northern hardwoods, aspen/young forests and oak-hickory forests. 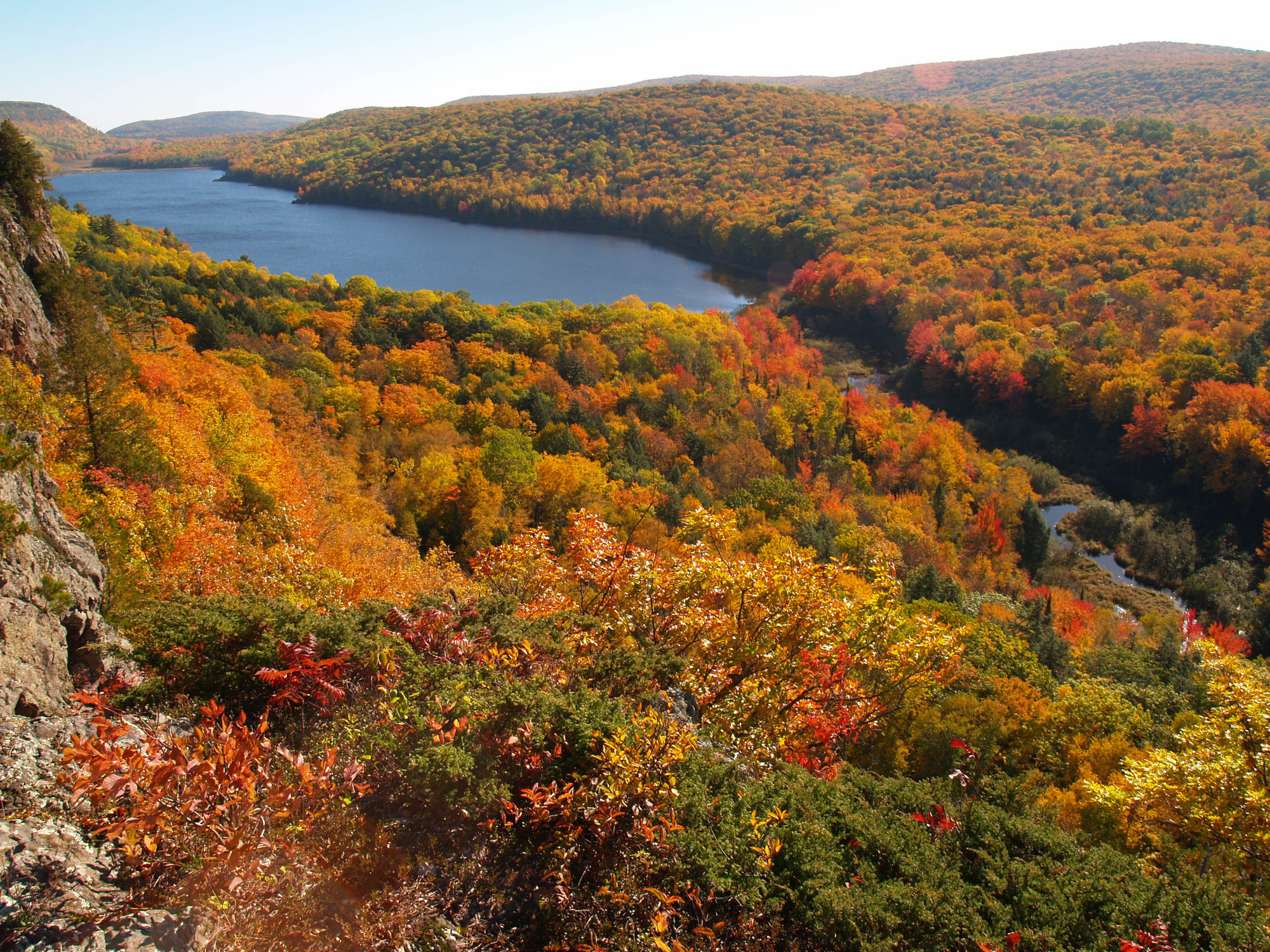 Aspen forests are most often found in northern Lower Michigan and the Upper Peninsula and are dominated by trembling (quaking) aspen and big-toothed aspen, both of which are shade-intolerant, fast growing and short-lived. Other trees associated with the aspen community include white birch, balsam fir, pin cherry, red maple, and white and red pine.

Young forests can be an old field growing up in saplings, a shrubby wetland or new trees springing up after recent logging. Aspen is a key component of a young forest. Many wild animals need young forest habitat. A couple of these include ruffed grouse and American woodcock, both prized by hunters.

Oak-hickory forests occur on well-drained soils in southern Michigan. These drought- and fire-tolerant species survive in some of the driest forest soils in Michigan. Shagbark, bitternut and pignut hickories along with white, red, pin and black oaks commonly grow in oak-hickory forests. The dry soils exclude species like maple, beech and ash which need moist, well-drained soils.

“These deciduous forests support many wildlife species. The nuts and acorns from oak, walnut, beech and maple trees are an important food source for deer, turkeys, bears, wood ducks, squirrels and many other species,” said Al Stewart, upland game bird specialist with the Michigan Department of Natural Resources. “Young deciduous forests with plenty of aspen are favored by grouse, woodcock, deer, elk and turkeys.” 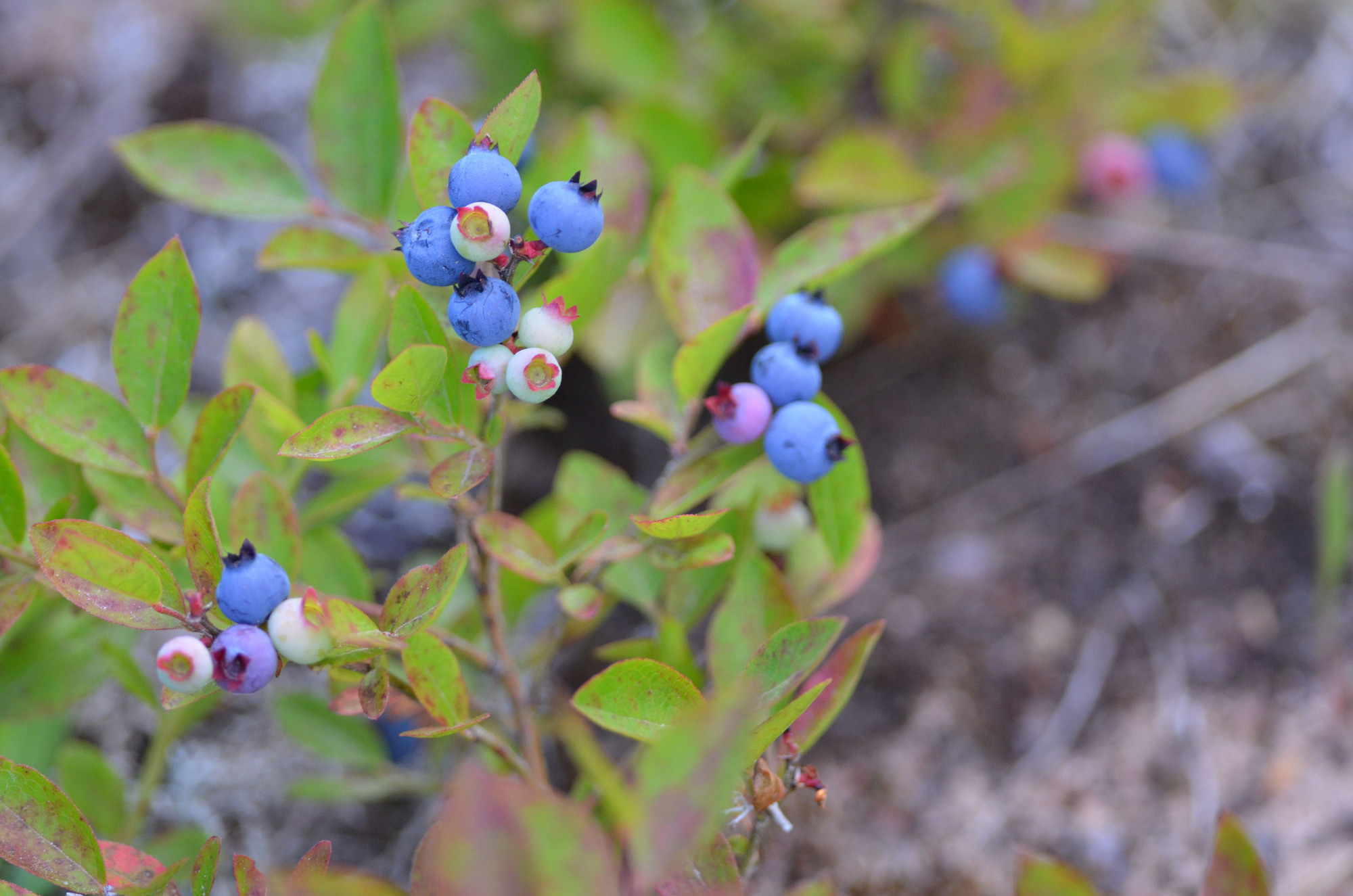 Michigan’s pine forests are found mostly in the northern portions of the state. Northern lower Michigan is known for its jack pine and pine-oak forests, while the Upper Peninsula has a large swath of spruce-fir forests, otherwise known as boreal forest.

Jack pine forests occur in the northeastern Lower Peninsula on extremely dry and nutrient-poor sandy soils. Fire-tolerant jack pines have cones that require fire or intense heat to open them and spread their seeds.

These forests are home to the Kirtland’s warbler, which is among the rarest wood warblers in North America. It nests mainly in young jack pine forests on public lands near the AuSable River drainage and winters in the Bahamas.

Kirtland’s warblers have very specific habitat requirements; they prefer large blocks of young jack pine, usually hundreds of acres in size. The Kirtland’s warbler is a ground-nester, often using the living branches of 5- to 20-foot tall jack pine trees to conceal its nests.

Because of these specific requirements, stands of jack pine trees must be actively managed. Large areas of sandy soils are planted with jack pine and then cut decades later, on specific intervals, to achieve the perfect-aged stands. 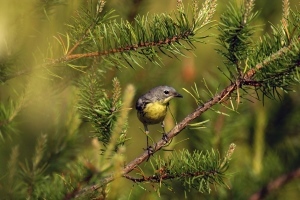 “The result of this forest management has been a marvelous comeback of this beautiful bird species,” said John Pepin, DNR deputy public information officer.

Pine-oak forests are made up largely of red and white pines, several varieties of oak, aspen and, in some areas, red maple. These forests also thrive on dry, sandy soils and are fairly fire-tolerant. This forest type can largely be found in the northern Lower Peninsula and the Upper Peninsula.

Boreal forests are made up largely of spruce and fir trees that thrive on the acidic, poorly drained, rocky soils of the northern shore of the Upper Peninsula. Ravens, wolves, snowshoe hares, ruffed grouse and deer can be found in this habitat.

Grasslands
Southern Michigan, once upon a time, had a bounty of prairie land. In the last 150 years, however, grasslands have become increasingly rare due to the conversion of prairie land to agriculture and other development.

Grasslands are, of course, characterized by grass, which form most of the plant life here. Natural grazing, wildfires and periodic drought help to keep woody plants from establishing and growing in grasslands.

The soil in grasslands is nutrient-rich from the growth and decay of deep grass roots. 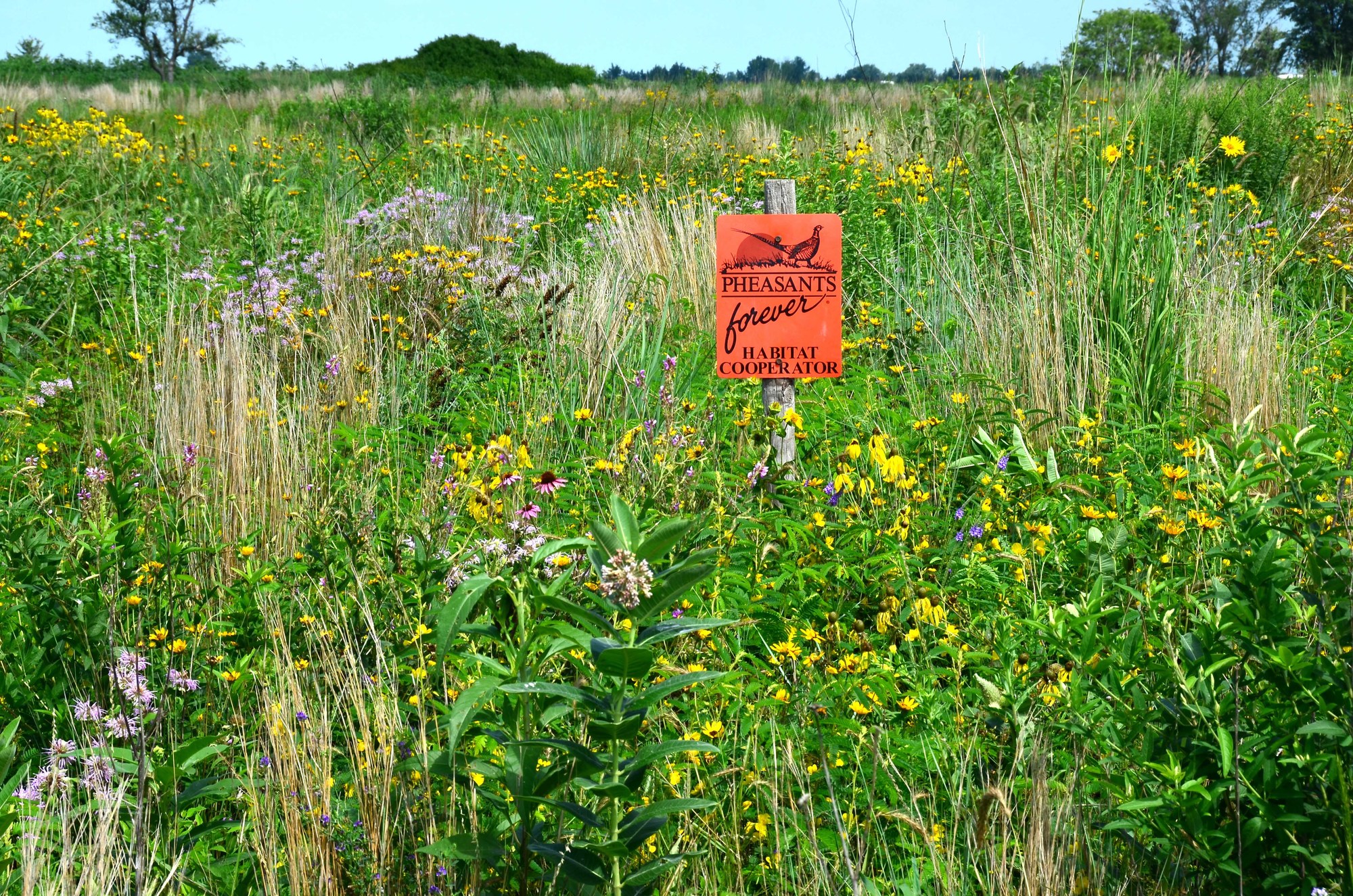 Grasslands are important partners in the filtration and purification of our air and water resources. They have deep, dense root systems. Grasslands trap precipitation so that water can percolate down into the soil, where it can be cleaned and filtered.

In addition to the important water purification that occurs in grasslands, these areas also improve air quality. Native grasses take in carbon dioxide and give off clean oxygen.

Native grassland vegetation also traps carbon. When the plants die, most of the dead plant material (which gives off carbon as it dies) is in the root system, under the soil. The carbon is trapped in the soil instead of being released to the air.

For many wildlife species, grasslands are a vital habitat type. Many creatures make their homes in Michigan’s grasslands. A variety of songbirds use the grasses for nesting and feeding including red-winged blackbirds, savannah sparrows, ring-necked pheasants, bobolinks and eastern meadowlarks.

“Pollinators like bees and butterflies love the wildflowers that grow in grasslands, and many mammals make their homes in grasslands too,” said DNR wildlife communications coordinator Holly Vaughn. “Badgers, meadow voles, coyotes and white-tailed deer rely on grasslands. Believe it or not, even American bison once roamed Michigan’s southern prairies.”

With Michigan’s wealth of available upland habitats, there’s likely one not far from home. Take some time this fall to explore an upland ecosystem - there’s a world of wonder there waiting to be discovered.

Aspen: Aspen trees grow up quickly after an area is logged.

Barren: Jack pines grow in sandy soils, like these in Marquette County.

Color 1, Color 2, Color 3: Deciduous forests produce fall color displays sought by a wide range of leaf peepers from Michigan and out of state.

Dune: Beach dune areas, like here at the mouth of the Two-Hearted River in Luce County, can be fragile environments, home to threatened and endangered species of plants and animals.

Grasslands: Grasslands are stunning when in full bloom in summertime (Photo by Pete Berthelsen).

Warbler: Kirtland’s warblers are tiny birds that nest in the jack pine forests of Michigan.