Michigan is home to one of the nation's oldest private-public partnership programs, offering financial incentives to private landowners who allow public access to their properties for hunting.

The Michigan Department of Natural Resources' Hunting Access Program has developed over the past 40 years, initially in the southern part of the state, recently expanding northward.

According to a 2013 study by the National Fish and Wildlife Foundation, outdoor recreation supports 6.1 million direct jobs across the country and $646 billion in spending each year.

In Michigan, hunters contribute $2.3 billion to Michigan's economy and support the professional management of the state's natural resources.

The DNR places a high priority on providing hunting access through public lands and leased private lands for public access. Michigan is blessed with over 4.5 million acres of public hunting lands, most of which are in the Upper Peninsula.

Michigan's Hunting Access Program was created in 1977 as the Public Access Stamp Program by Public Act 373 of 1976, with the purpose of leasing private lands to provide public access for hunting.

The original program was based on findings from a 1974 pilot study in five southern Michigan counties, initiated by the U.S. Agriculture and Soil Conservation Service, as well as an earlier access project called the Williamston Plan, which was in place during the late 1930s and early 1940s.

Within five years of its initiation, the Hunting Access Program had grown to over 790 properties leased, covering 188,000 acres. After 1982, those numbers declined to fewer than 50 farms and less than 8,000 acres by 2010.

"Program decline was a result of decreased funding availability and rental payments not keeping up with market conditions," said Monique Ferris, a DNR wildlife biologist and coordinator of the Hunting Access Program.

Since that significant enrollment decline, recent efforts have emphasized the importance of providing public access on private lands, reinvigorating the program.

In 2005, the DNR established the Hunter Recruitment and Retention Work Group charged with developing an action plan that identified three to five approaches to increase the number and proportion of Michigan residents hunting and to retain new, as well as current, hunters.

In 2010, the DNR and the Michigan Department of Agriculture and Rural Development received a Voluntary Public Access - Hunting Incentive Program grant, through the federal Farm Bill, to expand the Hunting Access Program.

Funding from the grant was used to increase lease rates, market the program, hire a program coordinator and contract with soil conservation districts to service the program locally. The overall goal was to use the grant money to double the number of acres and properties enrolled in the program.

In 2014, a new federal grant was approved for $1.2 million. The program was expanded into the eastern Upper Peninsula for the first time, opening over 5,200 acres for small game and sharp-tailed grouse hunting.

The following year, the DNR was awarded another federal grant to expand the program to the northern Lower Peninsula and hire a full-time program coordinator.

The DNR, in partnership with the Department of Agriculture and Rural Development and local conservation districts, has worked to lease a total of 200 properties with a combined 25,000 acres of private hunting lands for public access.

"Our commitment to providing access and working with new partners has more than tripled the number of properties enrolled in the Hunting Access Program over the past three years," Ferris said.

To improve the program, the DNR has also increased its conservation officer patrols on program lands, cultivated local conservation district support at the county level, created a Hunting Access Program webpage, and conducted surveys of hunters and landowners.

"The DNR has also developed an interactive mapping program, Mi-HUNT, making it easier than ever for hunters to locate HAP properties and to find a great deal of useful information at the click of a mouse," Ferris said.

Dawn Hergott, administrator of the Arenac Conservation District, has been a big proponent of the Hunting Access Program, helping to administer the program locally. She manages the highest number of HAP properties of any partner district in a single county in Michigan.

"Dawn's promotion of the program is incredible," Ferris said. "She has become a role model for other partners."

Hergott said the district has enjoyed having local community success with the program.

"In 2010, we were asked to participate in the Hunting Access Program, we had no properties enrolled in HAP and we took the opportunity to just start reaching out to our local landowners," Hergott said. "We started going to meetings like the county commissioners, townships and local sportsman's clubs. Soon, we started to be invited to local chapters of pheasant clubs, the Michigan Township Association and school boards to do presentations on HAP."

Hergott said the program was promoted with the help of the local weekly newspaper and was discussed in the conservation district's annual report and its annual meetings.

"Phone calls began to come in, and properties were enrolled," Hergott said.

Currently, the Arenac Conservation District has 25 properties enrolled in Arenac County and another five in Bay County, with a waiting list of four to five land parcels to be added as the acres of enrollment become available.

The DNR received $951,400 in that 2015 federal grant allocation to expand the Hunting Access Program into the northern Lower Peninsula, including Arenac County. 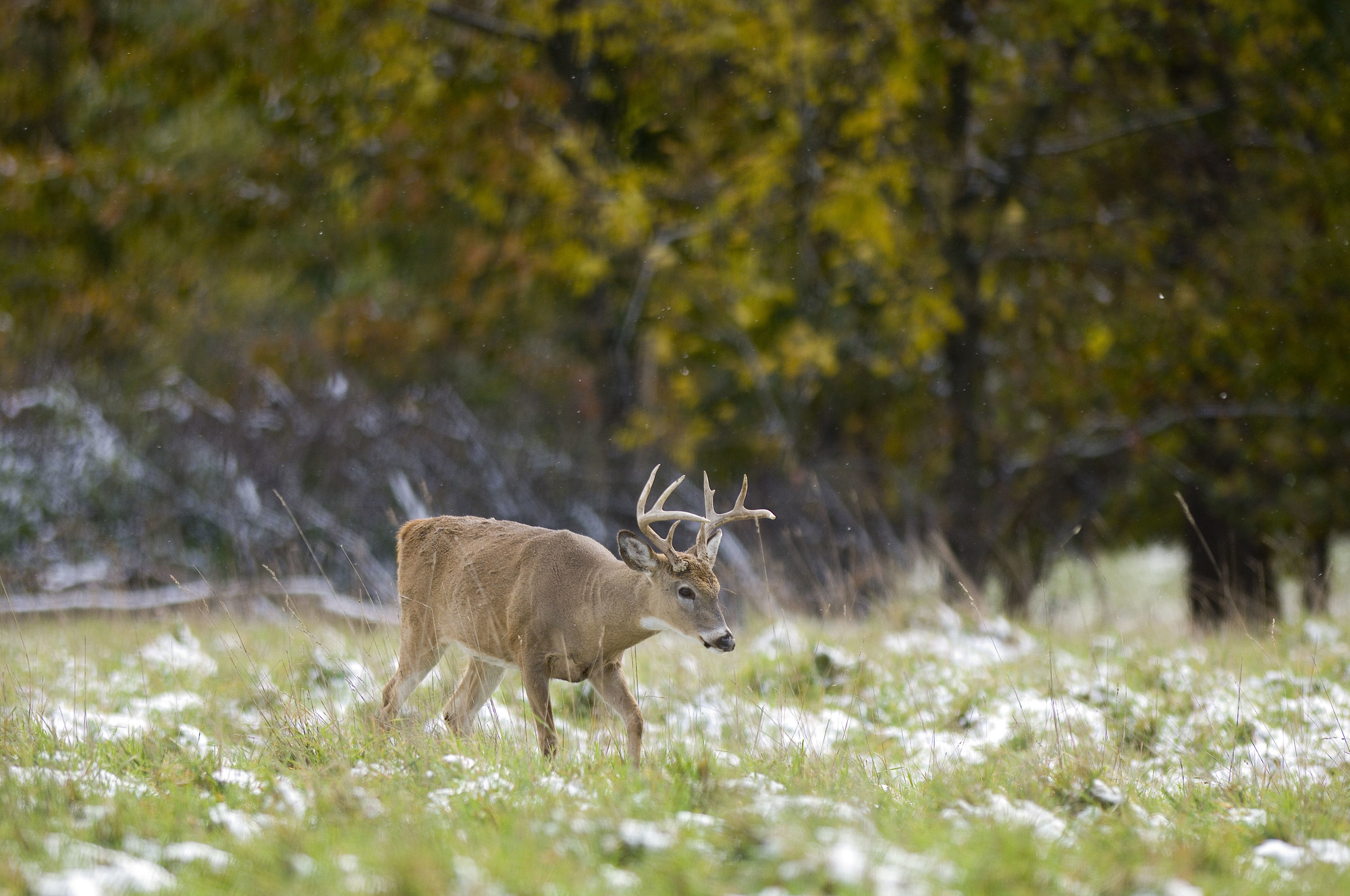 Properties must be at least 40 acres and contain a minimum of 5 percent wildlife habitat.

Beginning this year, there are additional enrollment incentives for those who live in Alcona, Alpena, Montmorency or Oscoda counties, within the deer management units affected by bovine tuberculosis. Landowners should contact the local conservation district in those counties to learn more about the earning potential for their land.

Hergott said she's honestly "a bit competitive" and wants programs to be successful in Arenac County.

"I won't say that our main goal was to have the most HAP properties enrolled in our county, but it certainly has been a success that we are very proud of," Hergott said. "HAP is a really wonderful program. Landowners get to share the love of their land with others, and hunters get to enjoy the beautiful lands for hunting."

Enrollment options are flexible for landowners. They can choose which types of hunting are allowed on their lands. Hunting options vary in certain areas but include:

Landowners may choose more than one option, such as deer and turkey hunting only.

"We found that the customizing the HAP program really appealed to landowners. They felt like it really fit their needs and they had more of a say as to how their land was to be utilized," Hergott said. "That is what really seals the deal when landowners are sharing their land with others. Our landowners love their land, and they are truly giving of themselves when they are willing to share it so openly." 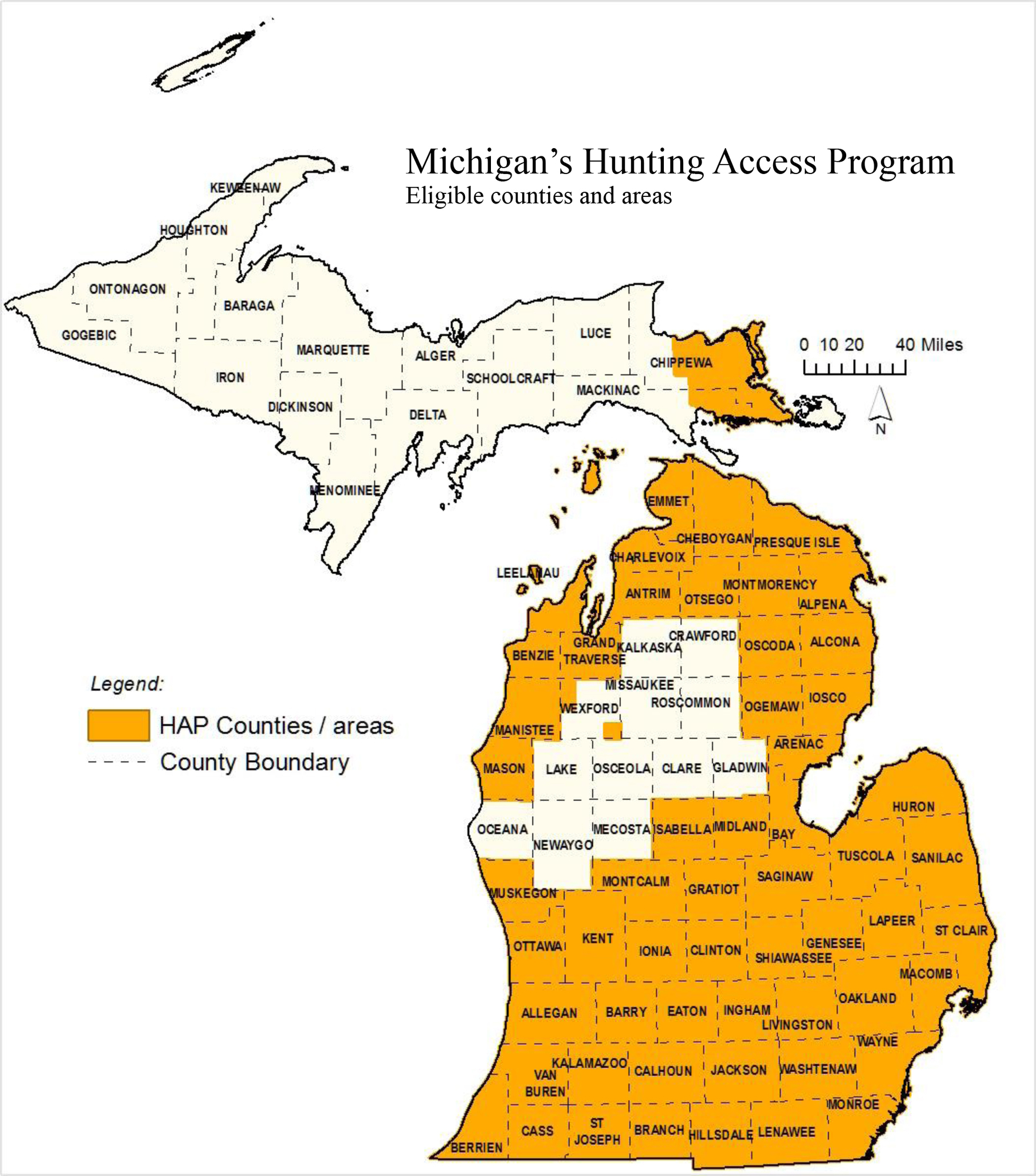 The Hunting Access Program can pay up to $25 per acre for high-quality habitat enrolled into a Farm Bill program, such as the Conservation Reserve Program, or for land devoted to a wildlife food plot. Maximum rates are paid for high-quality habitat allowing all hunting. DNR staff or a designee can evaluate your land to determine the lease rate. Leases are negotiated for a two- to three-year period with payments made at the end of each hunting season.

Additional benefits for landowners include:

"Property owners can help promote wildlife population management, support the local economy, reduce wildlife conflicts, improve their land and get paid to do it," Ferris said.

To control the number of hunters using Hunting Access Program lands at any one time, hunters are required to register to hunt each time they visit the property. The landowner can select either a mandatory registration at their home or a hunter self-registration box, which the DNR will provide and install.

The maximum number of hunters allowed on the property is determined by the total acreage, as well as the habitat type.

Finding a place to hunt

Hunting Access Program properties are available each day to hunters on a first-come, first-served basis during the hunting season. Hunters must register at the property headquarters before hunting. Self-service HAP properties have a mailbox designated as the headquarters, with registration forms and property information inside. At mandatory check-in properties, hunters must register directly with the landowner. 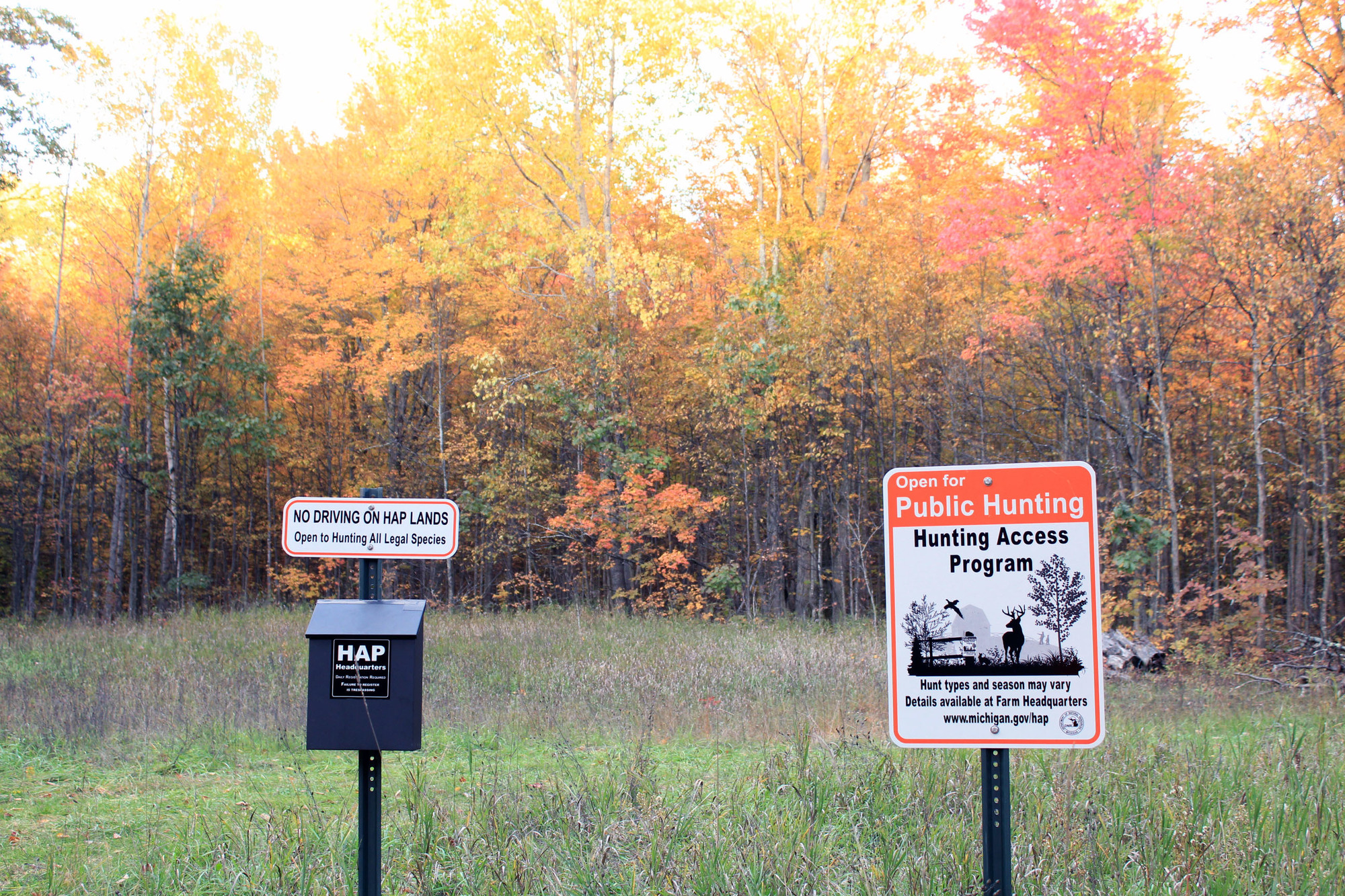 "Whether hunting or scouting, it is important to register upon arrival, because each property has a maximum number of hunters allowed at any one time," Parker said. "Failure to register is considered trespassing."

HAP properties are no longer printed in the Public Hunting on Private Lands Digest.

Visit www.michigan.gov/hap to learn more about the program and to see a current list of private lands available for hunting in Michigan. The HAP webpage includes details about enrolled properties, including types of hunting allowed and aerial photos of the properties.

There are no extra costs for hunters to use HAP lands, but they are responsible for reviewing information for the land they plan to hunt, checking in before each day of hunting and respecting the landowners' private property.

Also, check out the Hunting Access Program (HAP) Property Summary, especially from August through October, when new properties are added. HAP lands available are listed by county with detailed information about each enrolled property. Click on the landowner's name to generate a descriptive, aerial map of the property. Boundary lines, designated parking areas and the headquarters location all can be found in the HAP Property Summary.

To find public hunting land in Michigan, including HAP properties, check out Mi-HUNT - a cutting-edge, web-based mapping application at www.mi.gov/mihunt. Mi-HUNT allows users to navigate through a variety of map layers to create their own custom aerial imagery or download pre-made maps to meet their specific hunt-planning needs.

This year marks a significant milestone in Michigan, a time to celebrate 40 years of providing leased private lands for hunting through the DNR's Hunting Access Program, a tradition that is on target to continue for many decades into the future.

Deer: Beginning this year, there are additional incentives for landowner Hunting Access Program enrollment incentives for those who live in Alcona, Alpena, Montmorency or Oscoda counties, within the deer management units affected by bovine tuberculosis.

Grouse: The Michigan Department of Natural Resources Hunting Access Program is available in parts of Chippewa and Mackinac counties in the eastern Upper Peninsula where sharp-tailed grouse hunting areas are located.

HAP Map: A map shows the eligible counties and areas in Michigan under the Hunting Access Program.

Site: Self-service Hunting Access Program properties have a mailbox designated as the headquarters, with registration forms and property information inside. At mandatory check-in properties, hunters must register directly with the landowner.