When thinking about Michigan's important, valuable landscapes, many of us first think of the Great Lakes, northern forests and sandy beaches. Wetlands might not immediately come to mind.

They certainly didn't for early Michigan settlers, who were less than impressed with the state's abundance of swamps and marshes - more than 10 million acres of wetlands before European settlement.

"The banks of the Detroit River are handsome, but nine-tenths of the land in the Territory is unfit for cultivation," said General Duncan McArthur, stationed at Fort Detroit, in 1814.

The 1816 Tiffin Report by Edward Tiffin, surveyor general of the United States, had equally disparaging things to say about Michigan's land and agricultural potential, including: "Michigan apparently consisted of swamps, lakes, and poor, sandy soil not worth the cost of surveying. Not more than one acre in a hundred, or perhaps a thousand, could be cultivated."

In the two centuries that followed, about half of Michigan's original wetlands have been drained and filled.

"Michigan was once considered a mosquito-infested, godforsaken swamp, and wetlands were drained to establish roads and agriculture and build communities," said Steve Shine, who coordinates wetland mitigation banking - the process of establishing new wetland areas before development or other projects impact existing wetland areas - for the Michigan Department of Natural Resources. "This historic conversion of wetlands has made Michigan what it is today, but now we're focused on restoring wetlands to replace those impacted by agriculture, public works projects and development that are also important to the state."

Today, we recognize the value of wetlands, even celebrate them with observances like American Wetlands Month in May, and the need to conserve them.

"Michigan residents, whether they know it or not, have a strong connection to our state's wetlands and the waterfowl that rely on them," said Barb Avers, DNR waterfowl and wetland specialist. "Some go duck hunting every year, while others sit on their back porches and watch the annual fall waterfowl migrations. And many citizens get clear drinking water from groundwater purified by Michigan's wetlands." 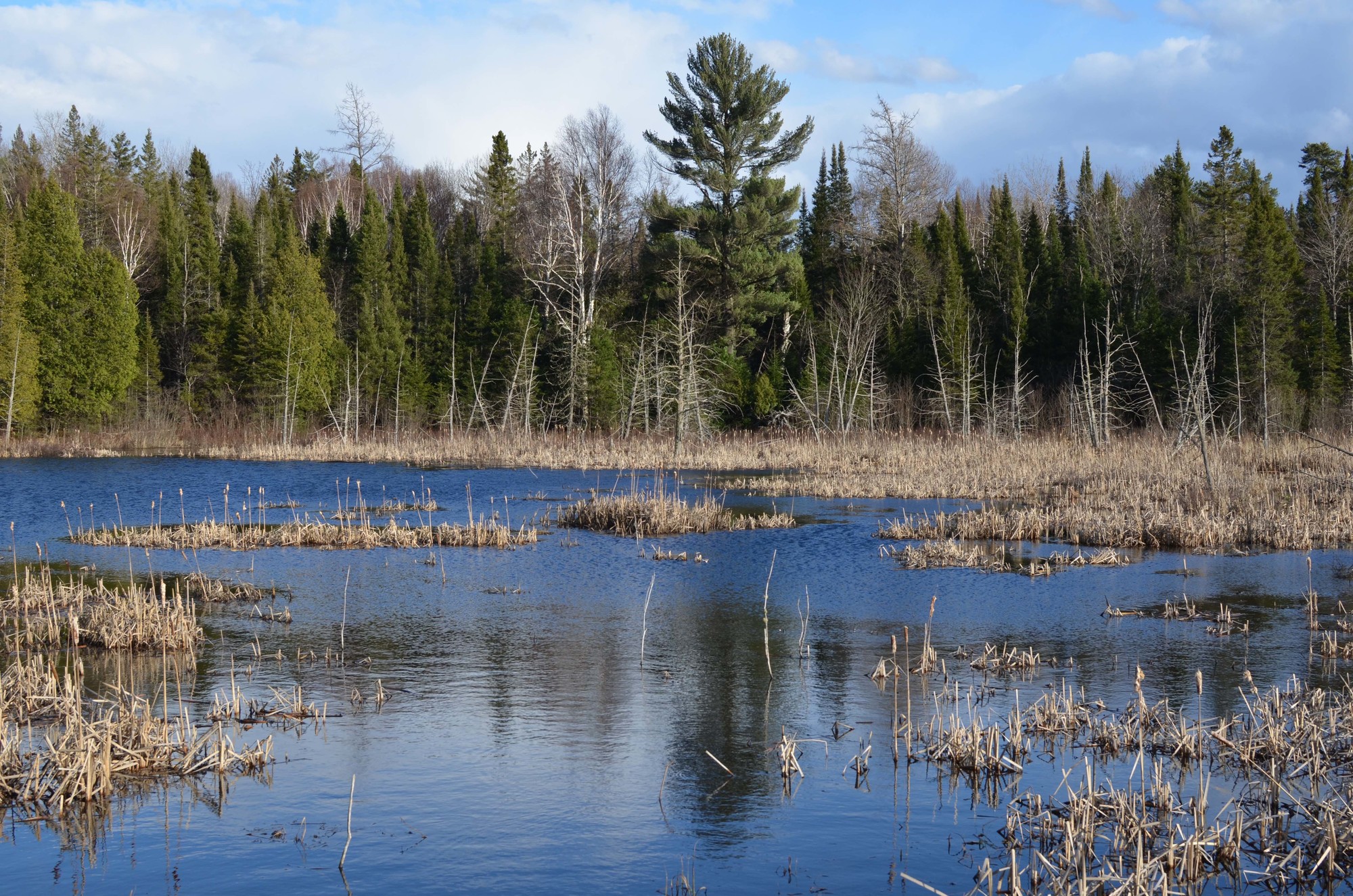 What exactly is a wetland?

Michigan law defines a wetland as "land characterized by the presence of water at a frequency and duration sufficient to support, and that under normal circumstances does support, wetland vegetation or aquatic life, and is commonly referred to as a bog, swamp, or marsh."

They are characterized by the presence of water that saturates the soil or covers the land for some or all of the year, which leads to the development of plant and animal communities adapted to these conditions.

The three major types of wetlands are marshes, which have standing water from less than an inch to several feet deep and might be called flooded grasslands; swamps, dominated by woody plants and best described as flooded woodlands or shrublands; and bogs, which occur where accumulations of decaying vegetation form mats that eventually cover and then fill in old ponds or lakes.

Wetlands are a significant factor in the health and existence of Michigan's other natural resources, such as inland lakes, groundwater, fisheries, wildlife and the Great Lakes.

Wetlands are "like nature's kidneys," Avers said, in that they filter pollutants from surface runoff, trapping fertilizers, pesticides, sediments and other contaminants, helping to break some of them down into less harmful substances, improving water clarity and quality. 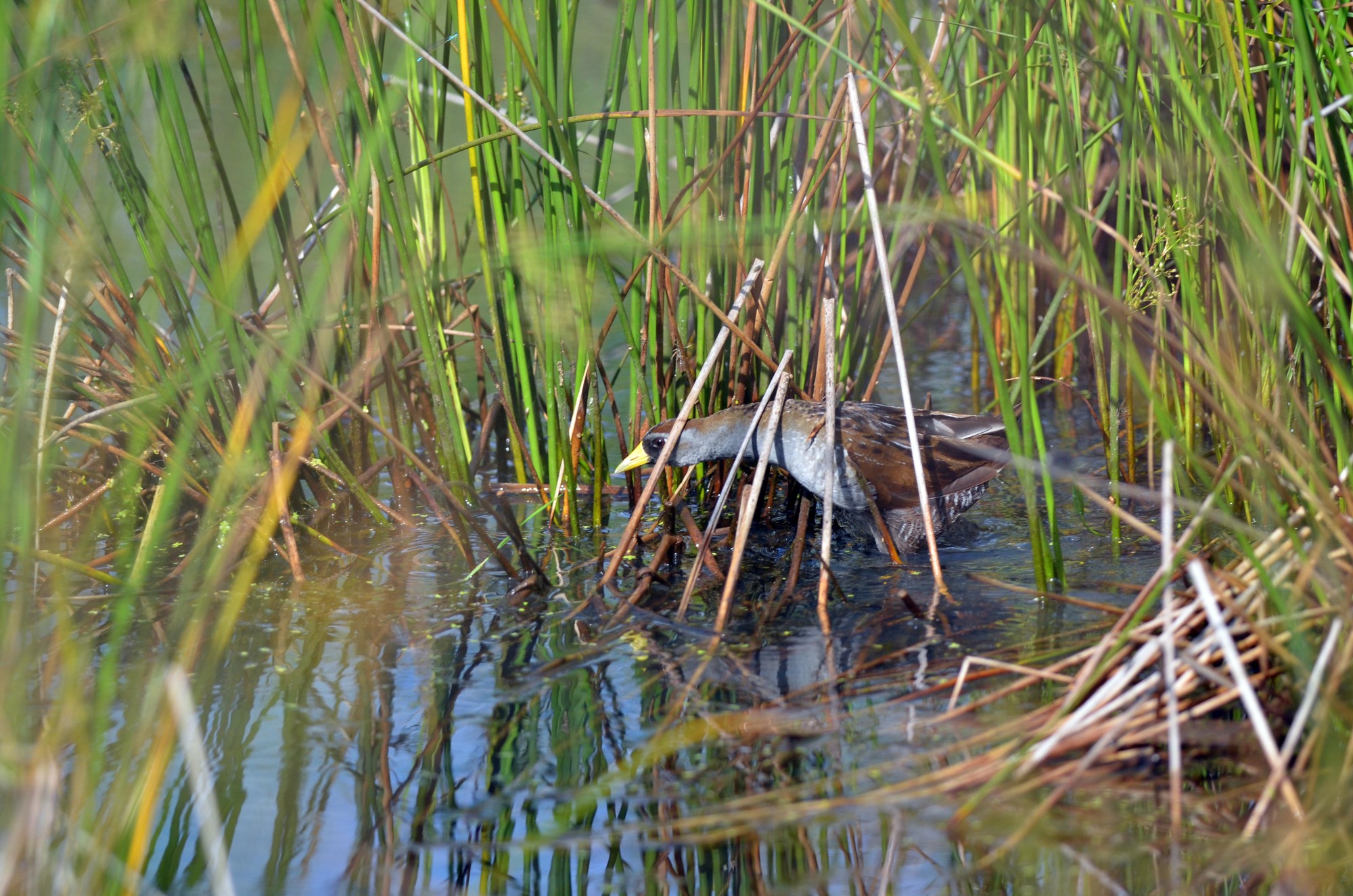 "Wetland soils help to filter pollutants and excess nutrients out of the water to create a cleaner water supply for all of us," said Holly Vaughn, DNR wildlife communications coordinator. "They also provide important flood control, acting like sponges to soak up extra rain and storm water."

Wetlands are vital to Michigan's wildlife as well. Acre for acre, they produce more wildlife and plants than any other Michigan habitat type.

"About 25 percent of mammals, 50 percent of birds, nearly all reptiles, and every amphibian in Michigan use wetlands," said Avers.

Avers added that, although wetlands make up only 5 percent of the area of the contiguous U.S., more than a third of threatened and endangered species live only in wetlands.

While many wildlife species find homes in Michigan's wetlands, many people find recreation destinations there.

This includes waterfowl hunting - Michigan regularly ranks in the top three states for Canada goose harvest and hunters in the nation, and in the top 10 for average annual sales of federal duck stamps - and a variety of other outdoor pursuits. 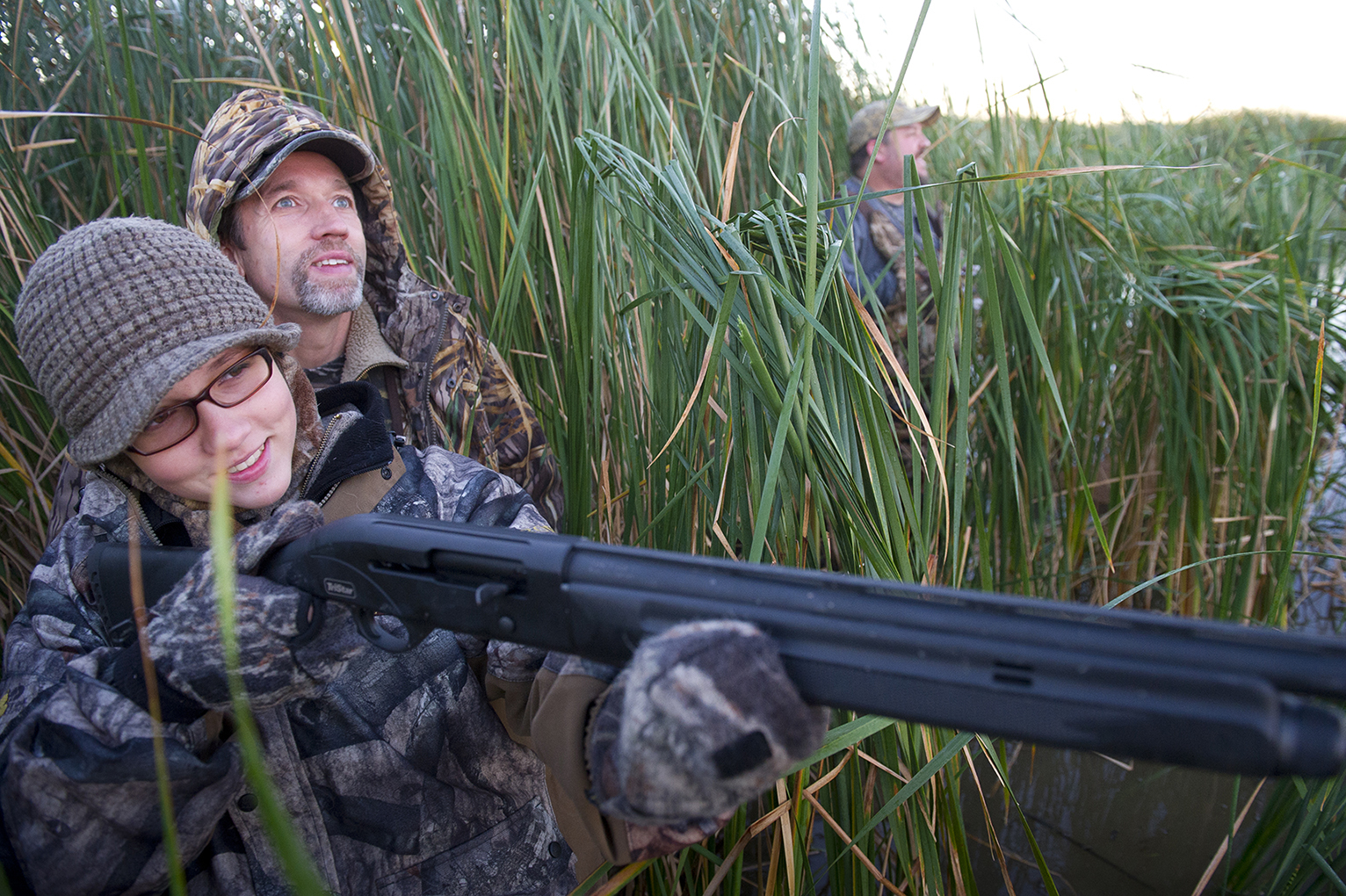 Avers added that renowned waterfowl and coastal wetland areas like Saginaw Bay, St. Clair Flats and the Detroit River have built and supported local economies and communities with industries such as duck decoys, boats and hunting clubs.

Although now recognized for their importance to wildlife, people, the environment and the economy - and with laws in place that have helped slow their loss - wetlands still face threats.

These threats include invasive species, climate change and declining Great Lakes water levels, and demand for development on existing wetlands.

"More than 50 percent of Michigan's historic wetland base has been lost, and the rate of wetland loss in key waterfowl landscapes exceeds 90 percent," said Avers. "We need to do more to conserve Michigan's wetlands and our great waterfowl heritage."

The DNR, along with many other organizations, has undertaken efforts to conserve and restore wetlands in Michigan. 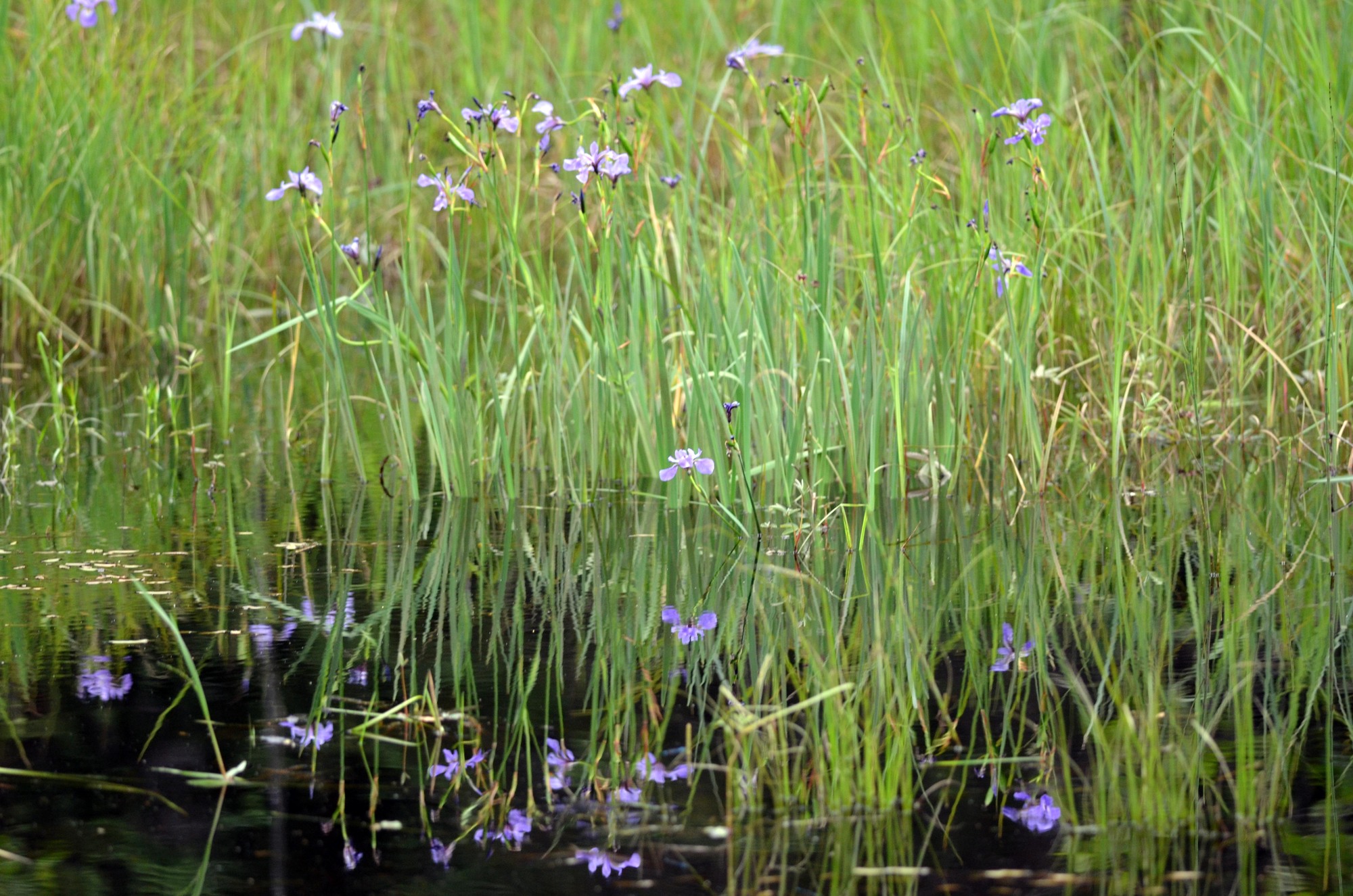 The DNR created these areas in the 1960s to generate exceptional waterfowl hunting opportunities and still manages them today to provide habitat for waterfowl and other species of wetlands wildlife.

"We've been very successful across Michigan in protecting and restoring wetland habitat, primarily driven by partnerships with other organizations," said Avers. "Our best success story is the collection of North American Wetland Conservation Act grants that we've received."

In Michigan, the 50 NAWCA projects either completed or under way have conserved a total of 56,762 acres of wildlife habitat. The program's funding of more than $18 million has stimulated partner contributions of more than $62 million for Michigan wetlands conservation.

Recently the DNR has partnered with the Michigan Municipal Wetland Alliance on a new wetland mitigation banking program that will preserve and restore wetland habitat on public lands to offset unavoidable impacts to existing wetlands. Look for a future "Showcasing the DNR" story about this effort.

While there is still much work to do on the wetlands conservation front, Michigan has come a long way from the days of treating these vital assets as godforsaken swamps.

Bog: Matting vegetation around the edge of a bog, like this one in Dickinson County, will eventually cover the water surface.

Bullfrog: Every amphibian in Michigan - including the state's largest frog, the bullfrog - uses wetlands.

Geese: Michigan regularly ranks in the top three states for Canada goose harvest and hunters in the nation. The sport, and other outdoor recreation pursuits, requires healthy wetland habitat.

Iris: Wild irises are one of many Michigan wetland plant species.

Turtle: Wetlands are home to painted turtles, one of Michigan's most common turtle species.

Wetland: More than 50 percent of Michigan's wetlands, like this one in Marquette County - now recognized for their importance to wildlife, people, the environment and the economy - have been lost over the last two centuries.

Yellowthroat: Half of Michigan's bird species, like the common yellowthroat, rely on wetlands.