Michigan's native herd of elk - massive animals standing 4 to 5 feet tall at the shoulder and weighing more than 600 pounds - had disappeared from the state by about 1875. 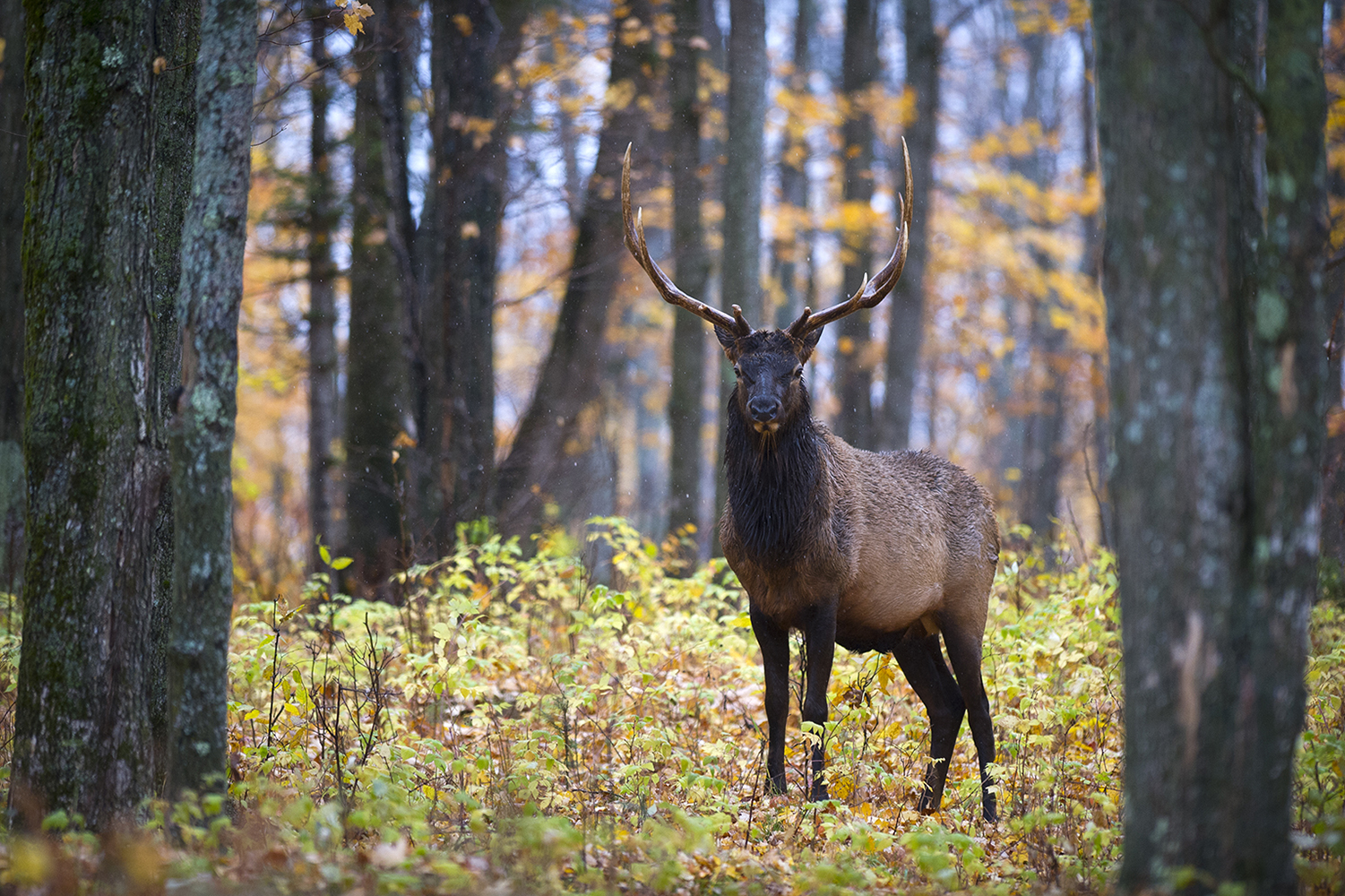 What followed has been a pretty remarkable conservation story. This year marks the centennial of elk restoration efforts in Michigan, which represents the contributions of many led by the Michigan Department of Natural Resources.

Today's healthy and abundant elk population is found in the northeastern Lower Peninsula. During a January 2017 elk survey, approximately 1,100 elk were estimated to be in Michigan's elk range, which includes the Pigeon River Country State Forest.

With their large profile and habit of gathering in groups, it would seem elk would be hard to miss, although elk remain a wild animal that many people have never seen or heard.

"Being able to see a wild elk in its natural habitat is a pretty special moment," said Brian Mastenbrook, northern Lower Peninsula field operations manager for the DNR's Wildlife Division. "Their size and presence can take your breath away, not to mention if you get the chance to hear one bugle."

An adult male elk, also called a bull, can weigh over 600 pounds. A female, or a cow, tends to be smaller and doesn't carry around the large set of antlers a bull can. A bull's antlers alone can weigh 40 pounds.

Bulls bugle to communicate with females and each other during the September and October breeding months.

The DNR is working this year to bring additional awareness to Michigan's elk population, while celebrating the 100th anniversary of the beginning of the recovery story.

Recently, the image of a common loon on Michigan's specialty wildlife license plate was recently replaced for the first time. The plates now show an elk for 2018.

"A change brings attention, and a new image on the wildlife habitat license plate will do two things: it will get people talking about elk and connect elk to Michigan, while also giving a needed boost for the nongame fish and wildlife fund," said DNR Wildlife Division Chief Russ Mason.

All funds derived from the special wildlife habitat license plates are dedicated to the nongame fish and wildlife fund.

"It seemed fitting the first time the plate had seen a change since it originated 16 years ago, would be dedicated to an animal that had actually disappeared from Michigan," Mason said.

Historically, elk were well-documented across Michigan, although like many wild animals their numbers drastically changed when settlement occurred.

Elk were killed without restriction. There were no limits on how many elk could be harvested, no designated hunting seasons or regulations on the hunting methods. Laws were not in place to protect wild animals.

"All things that are regulated today to ensure a healthy and sustainable population, were not always in place," said DNR Elk Program specialist Chad Stewart. "The DNR didn't exist. Settlers needed to feed their families, and people could make a living by harvesting and selling elk meat and other parts."

Elk were harvested for a profit, also known as market hunting, which today is illegal.

As the state was settled, large tracts of land were cleared, and timber was harvested to build homes and communities and shipped to large cities like Chicago. Land also was cleared to grow crops and raise livestock.

"Everything happening at about the same time in the late 1800s added up and was detrimental to many wildlife populations," Stewart said. "Elk were wiped out, and Michigan's forests looked much different."

During this time in history, conservationists across the country were focused on re-establishing wildlife populations, and relocation was a popular method. 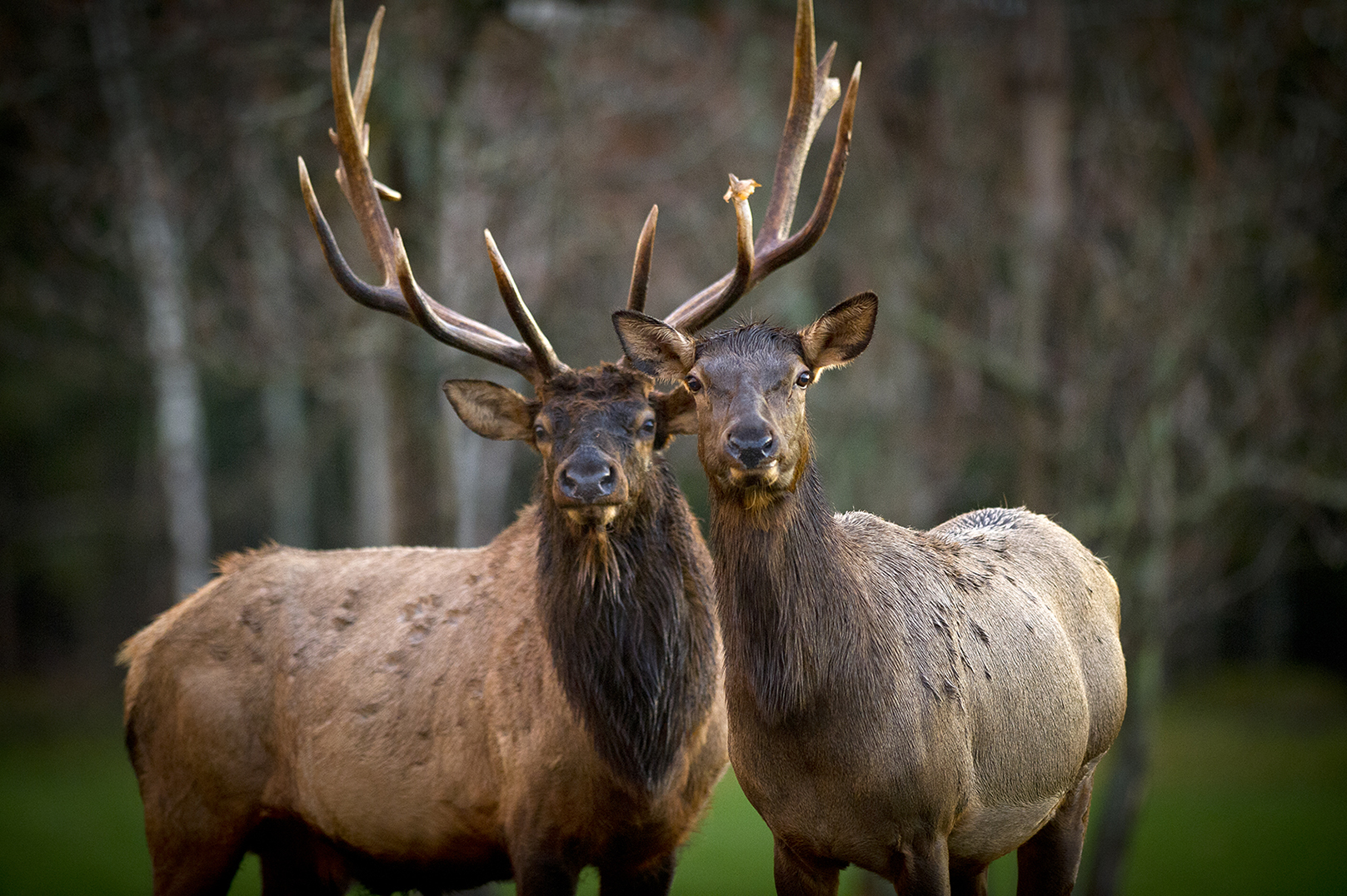 In Michigan, large tracts of public land were available in the northeast Lower Peninsula.

In 1918, seven elk were brought from western states to Wolverine, Michigan. By 1939, historical accounts reported an estimated 400 elk in Michigan, and the number continued to grow to 1,000 by 1958.

As elk numbers grew in Michigan, the animals dispersed outside their limited range, resulting in complaints. The public tolerance of elk peaked - the social carrying capacity was reached.

Poaching - the illegal take of wildlife - became a significant issue with elk.

"In both 1964 and 1965, successful regulated hunts were held," Mastenbrook said. "Unfortunately, after the initial two hunts, elk were being poached left and right."

Elk were thought to be affecting agricultural crops and tree regeneration, while also competing with deer for food.

In 1975, the Michigan Elk Management Plan was developed to establish management goals. During this same time, the elk population plummeted to around 200 animals. The desire to find a population goal that would satisfy all parties was needed.

"Forests and crop fields are a buffet for wild animals, and finding the balance of the right number of animals was important," Stewart said.

It was determined a management goal of 500-600 elk was the ideal number of elk that would be accepted socially. Later, in 2012, when the elk plan was revisited and updated, the population goal was reset at 500-900 animals.

Regulated hunting was determined to be the best way to manage the number of elk and where they will be found. Since 1984, annual hunting has been used to control the number and the locations of elk in northern Michigan.

Only Michigan residents can hunt an elk, and an application and weighted lottery system were created. Over the recent past, 100-200 elk hunting licenses have been available each year. 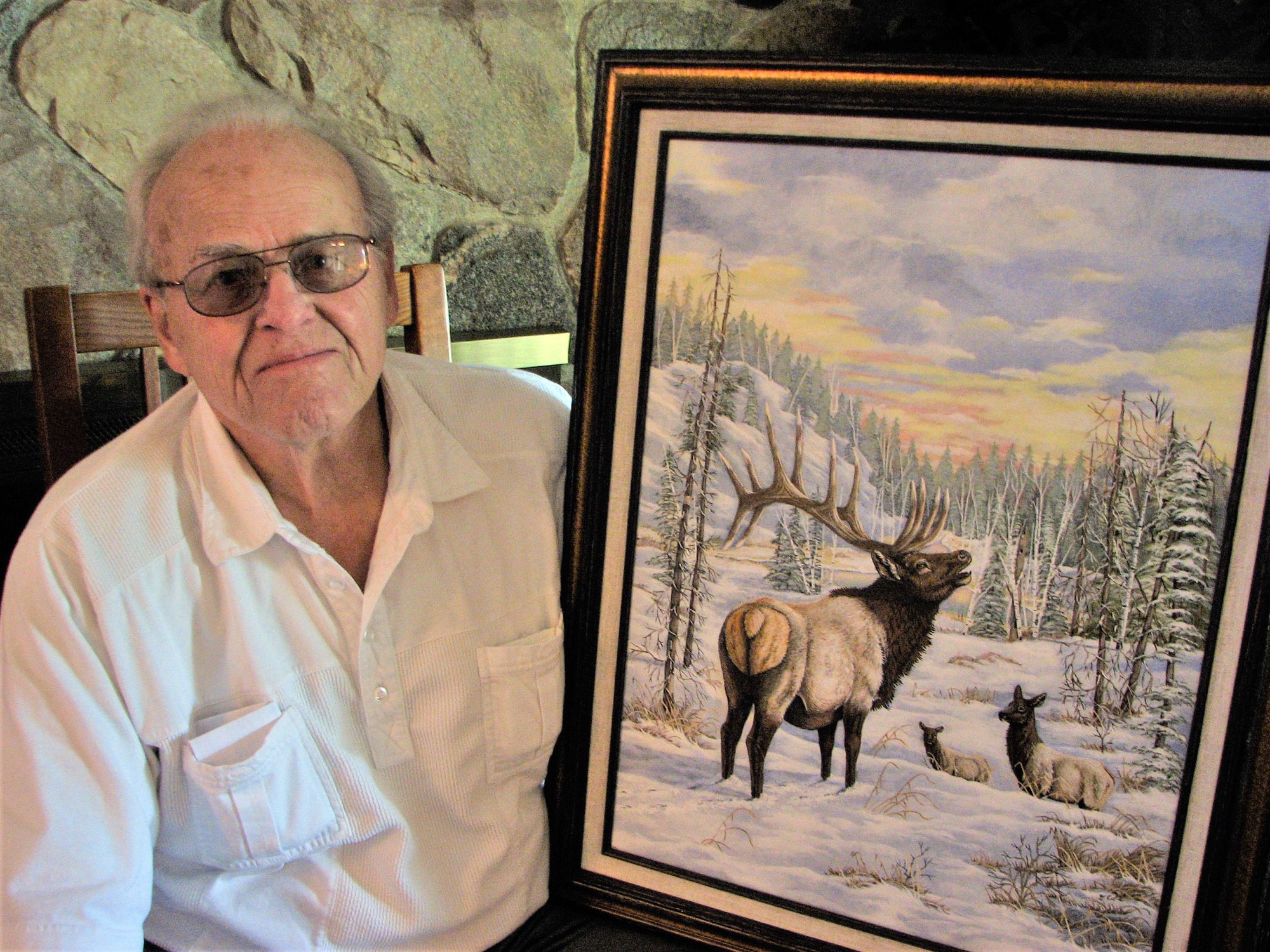 "Today, elk have a home in northeast Michigan," Mastenbrook said. "Many communities, clubs, organizations and individuals have come to be very 'elk proud.' We hope in 2018 those numbers who show their elk love will grow even more."

During the centennial, the DNR has several commemorative activities planned, including Elk University, a unique elk poster issue, local dedications and as the fall gets closer great elk viewing information made available for wildlife watchers.

For more information on elk, check out the DNR website at www.mi.gov/elk.

Elk 1-5: Michigan is celebrating its centennial year of elk conservation.

Hunters: Michigan's elk population is controlled with habitat management and regulated hunting. These hunters are shown with their take in Atlanta, Michigan in 2004.

Poster: Gary Cole of Dearborn, shown here with his acrylic painting of elk, was the winner of the 100th anniversary of elk poster contest.

Viewing: A wildlife watcher checks the horizon for Michigan elk.