Restoration to natural areas, increased fishing and hiking opportunities and a greenway along the Tittabawassee River included; settlement also provides for at least $5 million in additional projects to be solicited from the public 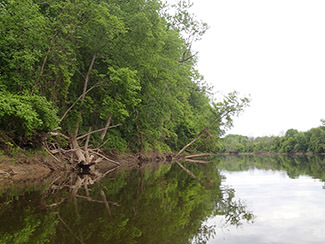 Under an agreement announced today with federal, state and tribal governments, the Dow Chemical Company will settle an environmental complaint for an estimated $77 million in projects and funding that will restore fish, wildlife, and habitats injured when hazardous substances were released in past decades from Dow’s manufacturing facility in Midland, Michigan.

The agreement is subject to public comment and approval in federal court.

“This settlement has been more than a decade in the making by a combined team of state, federal and tribal partners working together for the benefit of Michigan’s environment and precious natural resources,” Michigan Attorney General Dana Nessel said. “I look forward to seeing these projects implemented to the benefit of the communities and ecosystems impacted by Dow’s contamination.”

The Department of the Interior’s U.S. Fish and Wildlife Service and Bureau of Indian Affairs; the State of Michigan’s Department of Natural Resources, Department of Environment, Great Lakes, and Energy, and Attorney General’s Office; and the Saginaw Chippewa Indian Tribe of Michigan are acting together on behalf of the public as natural resource trustees.

The trustees have drafted a restoration plan that describes how the settlement will be implemented, which is also available for public comment.

The trustees will hold a public meeting to provide more information on the plan and to answer questions at 7 p.m. Thursday, Nov. 21 at the Four Points by Sheraton Saginaw, 4960 Towne Centre Road in Saginaw.

Contaminants released from Dow’s Midland facility over many decades injured fish and wildlife and natural areas in and around the Tittabawassee River, Saginaw River, and Saginaw Bay. The new agreement will address these injuries within Midland, Saginaw, and Bay counties.

“The settlement requires Dow to implement and fund restoration projects, which are outlined in a draft restoration plan, that will benefit fish and wildlife and provide increased outdoor recreation opportunities for the American public,” said Charles Wooley, regional director for Interior Region 3 at the U.S. Fish and Wildlife Service. “This restoration work can now begin even while separate, ongoing cleanup efforts continue.” 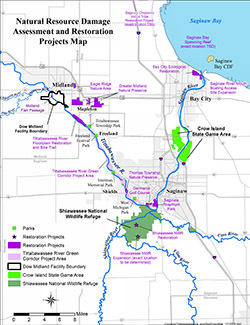 This restoration work will begin as ongoing clean-up efforts continue.

Under the settlement, Dow will carry out or fund restoration projects identified in Midland, Bay, Saginaw, and nearby counties.  These projects include fish spawning and fish passage improvements; restoration of thousands of acres of wetlands and other habitats; creation of multiple public nature areas with nature trails, fishing platforms, and one bike trail segment; protection of a green corridor along the Tittabawassee River; and expansion of boating access at the mouth of the Saginaw River.

Dow will implement many of these restoration projects under the guidance of the natural resource trustees and provide funding for other specific projects that the trustees will work with partners to implement.

The settlement also provides for at least $5 million for additional projects to be solicited from the public, and up to $10 million for long-term stewardship of the restoration projects, monitoring, and trustee costs to implement the settlement.

The natural resource trustees assessed injuries to natural resources under the Natural Resources Damage Assessment and Restoration program, which aims to compensate the public for past, present and future loss of fish, wildlife habitat and use of natural areas resulting from releases of contaminants into the environment.

As part of this program, the trustees identify parties responsible for contamination and either litigate or negotiate settlements to fund restoration actions.

“The trustees are working to compensate the public for past and expected future losses to recreational fishing, park use and hunting as a result of public health advisories issued because of releases from Dow’s Midland facility,” said Michigan DNR Director Dan Eichinger. “We appreciate being at the table to ensure that the citizens of Michigan are appropriately compensated for resource damage, and we look forward to continuing to improve the natural resources, wildlife and fisheries opportunities for people within these areas.”

The restoration projects described in the settlement compensate for lost uses of natural resources by recreational anglers, park users, and hunters by improving habitat for fish and game species, and through creating new – or improving existing – habitat areas that also provide public access to natural resources in and around the Tittabawassee River, Saginaw River, and Saginaw Bay. 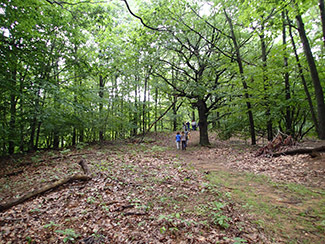 “In addition to our top priority of restoring habitat, we are also resolving some claims that will result in projects bolstering environmental access and education in the community,” said EGLE Director Liesl Eichler Clark. “These projects include a docking facility and education center to bolster BaySail’s environmental science program and the renovation of the Saginaw River Rear Range Lighthouse to allow public use.”

The Dow facility in Midland, Michigan, began operating in 1897. Chemical production through the years resulted in the generation of waste products, including dioxins, which were released into the Tittabawassee River.

These chemical waste products contaminated the Tittabawassee River and its floodplains and moved into the Saginaw River and Saginaw Bay.

The natural resources settlement is separate from the ongoing clean-up of the area being implemented by Dow under the direction of the Michigan Department of Environment, Great Lakes, and Energy and the U.S. Environmental Protection Agency.

Under this settlement, restoration work can begin within the watershed, while clean-up efforts in and along the rivers continue.

The public may comment on the Draft Restoration Plan and Environmental Assessment as well as on the proposed Consent Decree that outlines the settlement provisions.

Comments on the proposed Consent Decree may be submitted to the Department of Justice in accordance with the instructions provided in the Federal Register Notice.

/Note to editors: Photos and a conceptual plan diagram are available below for download and media/public distribution. Caption information follows. Credit: U.S. Fish and Wildlife Service.

Map: A map showing the locations of 13 restoration projects proposed as part of the Natural Resource Damage Assessment and Restoration at the Tittabawassee River system, located in mid-Michigan.

Project: This diagram shows the conceptual plan for the Tittabawassee River floodplain restoration and bike trail project. This project is one of more than a dozen that would be completed under the Dow settlement.

River: A slow, wide stretch of the Tittabawassee River is shown.

Walk: A group of people takes a walk through the Eagle Ridge project area, located east of Midland in Midland County.