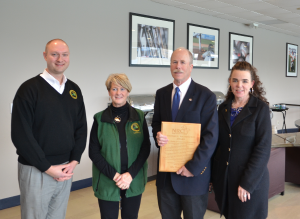 The Michigan Natural Resources Commission recently honored longtime conservationist Thomas Bailey with the Thomas L. Washington Award for Lifetime Commitment to Conservation and Outdoor Recreation at the commission’s regular monthly meeting, which took place yesterday in Comstock Park. Bailey, a Petoskey-area resident whose career included 34 years at the helm of the Little Traverse Conservancy, has played an integral role advocating for the state’s natural resources and recreation opportunities.

“As my friend and mentor David Irish once observed, conservation work is its own reward,” Bailey said. “Having been so blessed to be able to do this work for its own sake, I am especially grateful to receive this recognition.”

Bailey’s love for Michigan’s natural resources started young. The son of a Michigan Department of Natural Resources wildlife biologist, Bailey said that his early life was steeped in conservation work and education.

“My dad was my greatest mentor. He taught me not only to enjoy the outdoors, but also work to protect it.”

That upbringing developed into a lasting passion. Bailey became involved in environmental activism in high school, taking the short walk from his family home in Marquette to Northern Michigan University across the street to participate in campus meetings and discussions. At just 17, Bailey traveled to Washington, D.C., to testify before the U.S. Senate Interior Committee as part of a plan to include Isle Royale National Park in the National Wilderness Preservation System.

“Tom embodies the spirit of old-school conservationists,” said Chris Tracy, the Michigan Natural Resources Commission member who nominated Bailey for the award. “He’s lived and breathed natural resources conservation in Michigan and beyond for more than 40 years. His dedication to conservation is truly inspiring.”

Bailey pursued a Bachelor of Science degree in Park and Recreation Resources at Michigan State University and completed graduate studies at MSU in land use, resource economics and environmental law. Throughout that time, he advocated for conservation work and environmental rights at the state capitol. He went on to serve as a national park ranger at Isle Royale and Grand Portage (Minnesota) before joining the DNR in Lansing in the late 1970s. In 1984, Bailey made the move to the Little Traverse Conservancy in Harbor Springs, Michigan, serving as the organization’s executive director until 2018.

Under his leadership, the conservancy protected around 60,000 acres of land. By acquiring these lands for federal, state and local agencies to be dedicated as nature preserves and working forests, the conservancy ensured the preservation and continuation of these natural areas for years to come.

“Whether learning about environmental legislation in high school or working with the Michigan Natural Resources Trust Fund to safeguard beautiful natural areas for the enjoyment of future generations, Tom Bailey’s life is a powerful testament to the difference one person can make in the world around them,” said DNR Director Dan Eichinger. “Conservation is a team sport, and Michigan is fortunate to have had Tom on the all-star team.”

Since his retirement from the Little Traverse Conservancy, Bailey and his wife, Heidi, have more time to travel, frequenting “out west” places including the Black Hills and Yellowstone. But he never stays away too long.

“I always come home to Michigan,” said Bailey. “I come back to the clear waters, green forests, hills and fields of home. I come home appreciating the time I have now to savor what we have all worked together to save."

Bailey co-founded the Heart of the Lakes Center for Land Conservation Policy and the Top of Michigan Trails Council, and currently serves on the Lake Superior State University Board of Trustees and the Iron Belle Trail Fund Campaign. Throughout his storied career, he has worked with many national, state and local nonprofit groups for the betterment of the conservation field. He also has published a book: “A North Country Almanac: Reflections of an Old-School Conservationist in a Modern World.”

The conservation award is named for Thomas L. Washington, past director of Michigan United Conservation Clubs and a giant in Michigan conservation. During his life, Washington helped build coalitions of conservationists and environmentalists to achieve landmark initiatives that benefit Michigan residents to this day.

Award nominations are submitted for consideration by a member of the NRC and chosen by commission members in consultation with the DNR director.

The Michigan Department of Natural Resources is committed to the conservation, protection, management, use and enjoyment of the state’s natural and cultural resources for current and future generations. For more information, go to Michigan.gov/DNR.