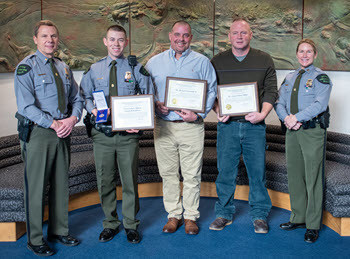 The DNR Law Enforcement Division honored Conservation Officer Josiah Killingbeck with a Purple Heart, in recognition of what Killingbeck endured during an assault by a suspect whom he was transporting to the Lake County Jail in Baldwin on March 20.

While being attacked, Killingbeck stopped his DNR patrol truck on the side of the road. Two men from Reed City, Corey Miller, 49, and Richard Olds, 48, were traveling together in a vehicle when they observed the DNR patrol truck and the commotion occurring inside.

"Officer Killingbeck, Corey Miller and Richard Olds represent the best of us," said Gov. Gretchen Whitmer. "All three of these men are worthy of recognition for their actions. Officer Killingbeck is a dedicated public servant who serves our state and stewards our natural resources admirably, and Mr. Miller and Mr. Olds stepped up and selflessly put themselves in harm's way to help a fellow Michigander. I am grateful to all three of them, and I encourage Michiganders who are interested in protecting our state's fish and wildlife, and pristine parks, forests, lakes and trails to pursue a career in the Department of Natural Resources."

Miller and Olds approached the patrol truck and were able to get the suspect off Killingbeck and onto the side of the road, where they waited for additional law enforcement to arrive.

"It's my honor to award Conservation Officer Killingbeck with a Purple Heart, and Lifesaving Awards to the two men who were in the right place at the right time, and selflessly put themselves in harm's way to help an officer," said Dave Shaw, acting assistant chief, DNR Law Enforcement Division. "The department expresses deep and sincere gratitude to Mr. Miller and Mr. Olds in what could have been a worse situation."

Shaw added that Killingbeck is a strong officer who continues to make the DNR proud by protecting Michigan's natural resources and serving his community with a high level of professionalism.

The assailant, Devinci Osiris Dumas, 22, of Grand Rapids, is currently imprisoned at the Michigan Department of Corrections Kinross Correctional Facility, for the following two felony charges: 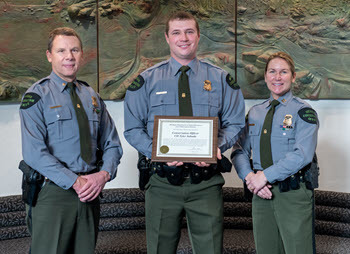 Conservation Officer Tyler Sabuda, Iosco County, was presented with a lifesaving award after aiding a 61-year-old Chesterfield man, suspected of having a stroke, who was stranded alone in a remote hunting cabin for nearly 48 hours.

Monday, Oct. 4, Conservation Officer Stephen Butzin, Delta County, was contacted by his grandfather, Timothy Butzin, who has a hunting cabin in Iosco County. Timothy reported that his neighbor's wife was concerned because her husband went duck hunting at their own cabin two days earlier and hadn't returned home or responded to communication.

Timothy Butzin told CO Butzin that his neighbor's cabin was locked, a vehicle was in the driveway and nobody answered the door, and he was concerned that his neighbor may be stranded in the woods.

CO Butzin communicated the information to off-duty Sabuda, who contacted Iosco County Central Dispatch to request they dispatch an active law enforcement officer to check the cabin. After learning nobody could check the cabin within a reasonable time frame, Sabuda activated into service and went to the cabin himself. While en route, Sabuda alerted Michigan State Police, who were arranging for a police dog's presence at the cabin.

Sabuda went to Timothy's cabin, and Timothy took Sabuda via off-road vehicle through the narrow trail to his neighbor's cabin. Sabuda checked the parked vehicle and property and could not find evidence of wrongdoing.

Announcing himself as a Michigan DNR conservation officer, Sabuda knocked on the door several times, heard a quiet noise, but nobody answered the door. Due to the elevated cabin, Sabuda stood on the ORV to see inside through the windows but still couldn't see well enough inside. He knocked on the door, asked if anyone was injured or needed help, and again heard the quiet, rhythmic noise.

Sabuda contacted dispatch via radio to request medical assistance and forced entry into the cabin, locating an unresponsive man, not breathing, lying on the floor - the noise Sabuda heard through the door was the man attempting to breathe.

Sabuda rolled the man to his side and cleared his airway using a towel, then started performing sternum rubs to the man's chest, which activated the man's breathing. Sabuda retrieved his automated external defibrillator from his patrol vehicle in case the sternum rubs stopped working, while instructing Timothy to meet and guide EMS from the road.

Sabuda performed sternum rubs until EMS arrived and transported the man to a hospital in Saginaw, where doctors suspect he may have suffered a stroke.

"Conservation Officer Tyler Sabuda dropped everything he was doing during his personal time and went above and beyond to ensure this individual's well-being," said Dave Shaw, acting assistant chief, DNR Law Enforcement Division.

Earlier this month the DNR announced that it will soon begin the hiring process for a 2022 conservation officer academy. Interested candidates should start the application process now by signing up for an upcoming Michigan Commission on Law Enforcement Standards physical fitness test and contacting a recruiter. Local recruiters are available to help prepare serious candidates for the process.