Fish kills may be common during spring thaw 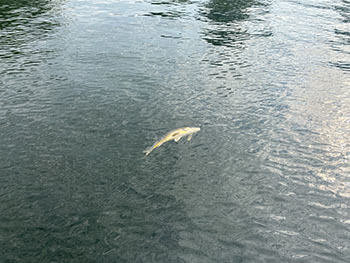 After ice and snow cover melt on Michigan lakes early this spring, it may be more likely for people to discover dead fish or other aquatic animals. While such sights can be startling, the Department of Natural Resources reminds everyone that this is normal, since winter conditions can cause fish and other creatures such as turtles, frogs, toads and crayfish to die.

"Winterkill is the most common type of fish kill," said Gary Whelan, DNR Fisheries Division Research manager. "As the season changes, it can be particularly common in shallow lakes, ponds, streams and canals. These kills are localized and typically do not affect the overall health of the fish populations or fishing quality."

Shallow lakes with excess aquatic vegetation and soft bottoms are more prone to this occurrence, particularly when a deep snowpack reduces sunlight for the plants. Canals in urban areas also are quite susceptible due to the large amounts of nutrient runoff and pollution from roads and lawns and septic systems that flow into these areas, especially from large storm events.

Fish and other aquatic life typically die in late winter but may not be noticed until a month after the ice leaves lakes. That’s because the dead fish and other aquatic life are temporarily preserved by the cold water. Fish also may be affected by rapid changes in water temperature due to unseasonably warm temperatures leading to stress and, sometimes, mortality. That could be the case this year with the record or near-record cold temperatures and the large snowfalls Michigan experienced this month and any rapid warming in the coming months.

Fish can become easily stressed in winter due to low energy reserves because feeding is at a minimum in winter. They are then less able to handle low oxygen and temperatures swings.

"Winterkill begins with distressed fish gasping for air at holes in the ice and often ends with large numbers of dead fish that bloat as the water warms," Whelan said. "Dead fish and other aquatic life may appear fuzzy because of secondary infection by fungus, but the fungus was not the cause of death. The fish actually suffocated from a lack of dissolved oxygen from decaying plants and other dead aquatic animals under the ice."

Dissolved oxygen is required by fish and all other forms of aquatic life. Once daylight is greatly reduced by ice and snow cover, aquatic plants stop producing oxygen and many die. The bacteria that decompose organic materials on the bottom of the lake use the remaining oxygen in the water. Once the oxygen is reduced and other aquatic animals die and start decomposing, the rate that oxygen is used for decomposition is additionally increased – that means that dissolved oxygen levels in the water decrease even further, leading to increasing winterkill.

For more information on fish kills in Michigan, visit Michigan.gov/Fishing. The public is welcome to report fish kills at Michigan.gov/EyesInTheField; such reports are valuable to the DNR’s ability to manage the state’s aquatic resources. If you suspect a fish kill is due to non-natural causes, call the nearest DNR office or Michigan's Pollution Emergency Alert System at 800-292-4706.