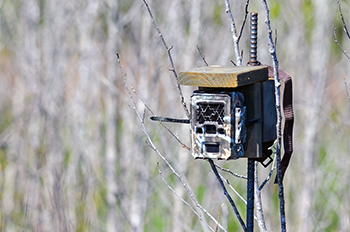 Join us for an in-depth look at the inner workings of trail cameras and what makes for a long-lasting, high- performing camera.

This fascinating session will be held from 6:30 to 9 p.m. Thursday, April 28 at the Michigan Iron Industry Museum in Negaunee and via Zoom.

Find out about new technology and how it is being incorporated into the latest trail cam models and learn about how researchers set up cameras to study wildlife behavior and populations, with a great panel of presenters.

Featured speakers will include:

Rich Howell, founder and CEO of TrailCamPro, Ltd. of Spingfield, Missouri. Howell drew his first bow tag at age 11. Ever since he's been addicted to the outdoors. When Trail cameras first emerged Rich quickly became an early adopter. However, models available at the time were lacking and there were no established standards used to evaluate cameras. The lack of public information and inaccurate advertising statements by manufacturers fueled the creation of Trailcampro.

Rich and his staff created tests using proprietary equipment to objectively evaluate all available trail cameras. The end result is a comprehensive database of objective test results published annually. This database is used by institutional researchers and consumers alike to stay informed and make educated purchases. Trail Cam Pro annually tests more than 50 brands of trail cameras. Their work has been featured in Outdoor Life Magazine.

Howell is still an avid bowhunter spending most fall days 25 feet up in a tree. Off-hunting season activities include extensive habitat management and spending time with his wife chasing their three kids.

Tyler Petroelje, DNR wildlife research specialist at Marquette, he has extensively used trail cams to study population ecology, behavior and co-occurrence of wildlife. He completed his Ph.D. and master's degree through Mississippi State University studying patterns of carnivore resource selection and the landscape of fear for white-tailed deer as part of the Michigan Predator-Prey Project.

He graduated from Northern Michigan University with a bachelor's degree in ecology. He has also spent time capturing and collaring elk and brown bears in Kodiak, Alaska. He also worked as a wildlife technician for the National Park Service at Pictured Rocks National Lakeshore capturing and monitoring black bears. In his spare time, he enjoys birding, fishing, hunting and exploring public lands.

Wildlife biologist Erin Johnston and wildlife technicians Kyle Seppanen and Austin Ayers, all of the Keweenaw Bay Indian Community, will talk about past and current use of remote cameras to monitor wildlife within the L'Anse Indian Reservation in Baraga County.

Note to editors: An accompanying photo is available for download and publication below. Credit: Michigan Department of Natural Resources.

Michigan Trails Week, Sept. 18-25, a great time to discover what makes us the Trails State