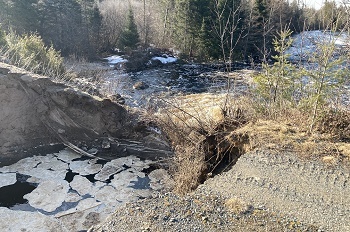 A person visiting the area Wednesday evening noticed the washed-out area around the dam and berm and contacted the local DNR Wildlife Field Office.

“Initial examination of the site suggests that, at some point over the last few days, the Net River Dam experienced a partial failure due to corrosion of the water control structure in the middle of the dam, and that caused a sinkhole to develop,” said Bill Scullon, DNR wildlife operations field manager. “The good news is that both the upstream and downstream embankments appear to be solid and are currently retaining the impoundment water just as they are designed to do.”

Scullon said the Net River dam is in a remote area of the Upper Peninsula and is considered “low hazard” – meaning a failure poses low risk to public safety, property and environment. The road that crosses the top of the dam is used by several private camp owners to access their property, and DNR staff already has been in contact with some of those property owners.

In addition to DNR wildlife and forestry staff, several agencies are involved or aware:

There are three bridges downstream of the Net River dam: two are on U.S. 141 and the other is a railroad bridge. Officials don’t expect the bridges will be affected, but local authorities including the Baraga County Sheriff’s Office, the Iron County Sheriff’s Department, the Baraga County Emergency Management Department and the Iron County Emergency Management Department have been notified. Authorities at the Paint River Dam, in Crystal Falls, also have been alerted; they are making room for any additional water that could flow their way if the dam fails.

Scullon said the situation is stable and will be monitored for the foreseeable future. The DNR Wildlife Division conducted a fly-over Thursday afternoon to get an aerial view in order to ensure there are no unforeseen risks to public safety downstream.

He said, too, that the Net River Flooding is a culturally important impoundment that supports a variety of fish and wildlife, and the area has benefited from a habitat restoration partnership with the Keweenaw Bay Indian Community.

“The situation at the Net River dam should pose no concern for area fish and wildlife,” Scullon said. “The amount of water moving through this structure is normal, and nothing we’ve seen downstream is unusual for what we would expect this time of year.”

The Net River dam was inspected in August 2020 and received a rating of fair.

Join Mi Trees and plant a tree (or trees!) for the future