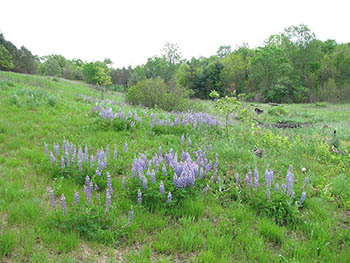 In an effort to restore oak barren natural communities that once dominated Waterloo and Island Lake recreation areas – two popular destinations in Michigan’s state parks system – portions of the parks have been cleared of invasive and non-native trees and plants.

Visitors to these two southeast Michigan state parks definitely will notice the changes, and the Michigan Department of Natural Resources wants to be sure everyone understands the goals of this carefully planned project.

The DNR Parks and Recreation Division has been working on long-term restoration efforts for more than 20 years, but this is the first time that areas of this size were cleared of trees at either of these parks. Specifically, black locust, autumn olive and various pine species were removed.

"The removal of so many large trees will be quite a change to the average park visitor who frequents this area, but will produce real long-term benefits,” said Bob Clancy, ecological restoration specialist in the DNR Parks and Recreation Division. "The clearing work that took place will help re-establish oak barren communities that are vanishing in Michigan."

Why are oak barrens a priority?

An oak barren, sometimes referred to as a savanna, is characterized by native prairie grass and wildflowers mixed with widely scattered oak trees. These areas provide critical habitat for a variety of grassland birds, such as bobolink, Henslow's sparrow and eastern meadowlark, and other wildlife, and they’re a unique part of Michigan’s natural heritage. These fire-dependent communities have global significance, too, because they contain an assemblage of plants and animals that are distinct and now quite rare.

"Much of southern Lower Michigan once supported extensive areas of tallgrass prairie and oak barrens, but today less than 1 percent of the original prairie and savanna remains,” Clancy said. “We hope that our efforts – even though the look of the landscape might be shocking to some visitors – set the stage for the hearty return of this incredibly valuable natural habitat.”

During the agricultural expansion in the latter half of the 1800s, barrens were easily cleared and converted for grazing and row crops. Since that time they have succumbed to rapidly closing tree canopies due to nonagricultural development, lack of fire and the spread of invasive species.

Here’s a snapshot of the work that took place at each location:

At Waterloo Recreation Area, in Jackson and Washtenaw counties, 7 acres of invasive black locust and autumn olive were removed this past February. This will help open up habitat surrounding important wetlands, also known as fens, within the site, while also increasing future outdoor recreation opportunities such as hunting, hiking and bird watching.

Work at Island Lake Recreation Area, in Livingston County, included the removal of invasive and non-native trees across more than 15 acres, helping expand grassland habitat and connecting several smaller quality habitat patches across a 60-acre area. The remaining work, including mowing, some further tree removal and the removal of logs, is expected to be completed by the end of May.

To further promote native plant recovery and restoration of oak barrens, invasive species control efforts will continue to take place throughout the year, as well as additional tree removal, prescribed fire and other management in future years.

For questions regarding either project, please Bob Clancy at ClancyR@Michigan.gov or 517-202-6751.

Anyone interested in getting involved with restoration efforts at these and other state parks in southeast Michigan are encouraged to contact Kelsey Dietz, DNR parks and recreation volunteer steward, at DietzK2@Michigan.gov.

The Michigan Natural Features Inventory has more information about oak barrens in our state.