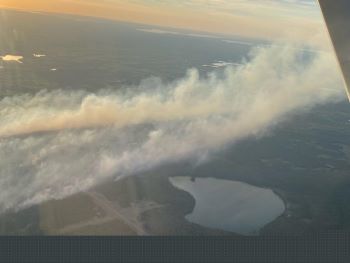 Michigan Department of Natural Resources firefighters and local partners are continuing efforts to contain the Blue Lakes Fire in Montmorency and Cheboygan counties. As of 11 a.m. Saturday, the fire covered an estimated 2,300 acres and is roughly 30% contained.

Evacuations have occurred at the Black River Ranch, where 12 structures are threatened.

Elsewhere in the fire area, an outbuilding, a shed, was reported a loss. One privately owned vehicle was also damaged.

DNR spokesperson Kerry Heckman said one department firefighter sustained a minor injury and has received medical treatment, and that a group of kayakers on the Black River within the fire area was escorted to safety by a DNR conservation officer. Firefighter safety and public safety are the DNR’s top priority on a wildfire.

“We are grateful to report no life-threatening injuries and no serious property damage, as everyone on the scene gives their best effort to suppress this fire,” Heckman said. “Thank you to everyone who has followed reports and steered clear of this area.”

The cause of the fire, detected Friday afternoon, has been determined to be a lightning strike, likely from a May 11 thunderstorm. 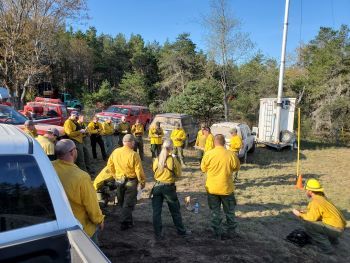 Road closures remain in effect and have been expanded to protect public safety and accommodate fire suppression efforts.

The DNR has 43 firefighters, a 13-member incident management team and a spotter plane responding. They are assisted by six U.S. Forest Service firefighters and a hand crew, as well as six local fire departments.

Fire danger remains very high in the Lower Peninsula and high in the Upper Peninsula. Due to increased risk, the DNR has not conducted prescribed burns in the past week and has not been issuing burn permits. Before any open burning, check Michigan.gov/BurnPermit and get fire safety tips at Michigan.gov/PreventWildfires.