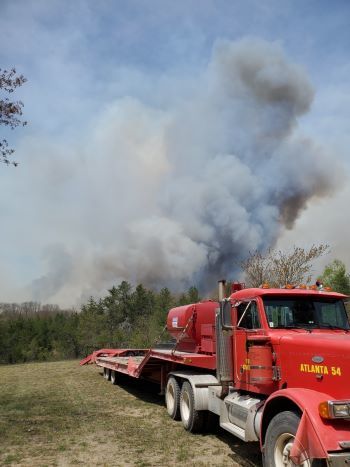 The Blue Lakes Fire is currently estimated at 2,710 acres. The increase in acreage from Saturday’s estimate is based on more accurate GPS measurement of the area.

Fire activity is expected to be lower today due to more favorable weather conditions and ongoing mop-up efforts.

Cause attributed to May 11 lightning strike

“Although northeast Michigan had widespread rain Saturday afternoon, little fell in the fire area,” he said.

The cause of the fire has been determined to be a lightning strike from a May 11 thunderstorm.

“It’s not uncommon for a lightning strike to smolder for several days until surface fuels dry out enough to ignite and allow the fire to spread,” Webb said.

A number of local roads as well as a portion of the Black River remain closed today, including:

Local departments have helped since fire was spotted Friday

The fire was reported on Friday about 12:40 p.m. That afternoon, a DNR conservation officer escorted a group of kayakers on the Black River within the fire area to safety. The fire destroyed an outbuilding and damaged a privately owned vehicle.

Due to increased fire risk, the DNR has not conducted prescribed burns in the past week and has not been issuing burn permits. Fire risk remains high to very high in much of northern Michigan. Before any open burning, check Michigan.gov/BurnPermit and get fire safety tips at Michigan.gov/PreventWildfires.

Note to editors: Accompanying  map is available below for download.