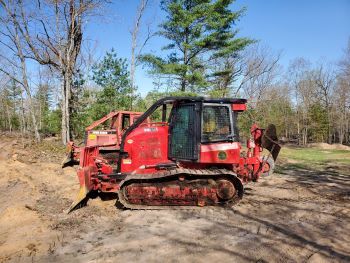 The Blue Lakes Fire in the northern Lower Peninsula now is 75 percent contained and estimated at about 2,200 acres, according to the Michigan Department of Natural Resources.

DNR firefighters and cooperating agencies have been working since Friday to contain the fire, which covers portions of Montmorency and Cheboygan counties. It has been determined that the fire originated with a Wednesday lightning strike that smoldered for a few days before spreading into dry fuels, resulting in a wildfire. The fire was reported about 12:40 p.m. Friday.

Heckman said that containment doesn’t necessarily mean the fire is out, but rather that it is unlikely to spread beyond the containment lines. These are areas where firefighters have been able to plow a line down to bare earth (removing all fire fuels) around that portion of the fire.

“There may still be hot spots within the contained area,” she said. In the case of the Blue Lakes Fire, the uncontained portion of the fire line is primarily in low, wet areas that are difficult for firefighters to reach. Crews will be working today in those areas to connect gaps in the containment line.

Fires are mapped throughout the duration, and acreage is estimated. The 2,200 acres being reported today is smaller than Sunday’s estimate due to improved mapping with firefighters on the ground using a variety of tools, Heckman said.

“We will be using a drone to do some infrared imaging to identify hot spots within the containment line that need attention,” Heckman said.

Fire danger remains high in northern Michigan. Due to increased fire risk, the DNR has not conducted prescribed burns and has not been issuing burn permits. Before any open burning, check Michigan.gov/BurnPermit and get fire safety tips at Michigan.gov/PreventWildfires

Over 185 parcels of surplus state-managed land available via online auctions in August, September