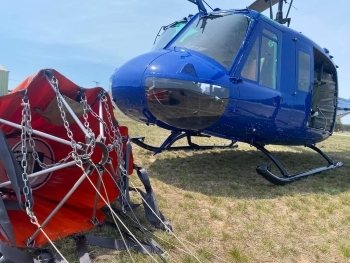 An idea first conceived in 2016 has become reality – and likely will be a big help in fighting future wildland fires in Michigan.

Earlier this month, a Michigan State Police UH-1 helicopter, known best as a “Huey,” hovered low over a northern Michigan lake to fill with water a 320-gallon collapsible bucket owned by the Michigan Department of Natural Resources. The Huey carried the water back to the fire area and released its load to calm the flames.

The devices are commonly referred to by the trade name, “Bambi Bucket.”Though some assume the bucket’s name is somehow connected to the famed Disney deer, industry lore says that inventor Don Arney – a 2017 National Inventors Hall of Fame inductee – made up the name as a joke. It stuck.

“It’s another important tool in the toolbox when it comes to fighting fires,” said Dan Laux, Fire Section manager for the DNR’s Forest Resources Division. “The Bambi Bucket can help in the early stages of a fire to keep it manageable, keep it small, especially in an area that’s hard to access.”

A cooperative effort years in the making 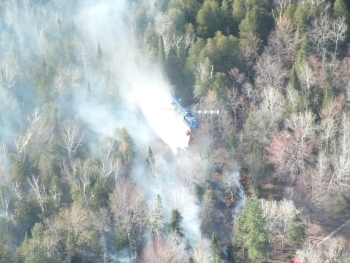 When a fire is burning hot, dropping water also can help cool it down so crews on the ground can get near it more safely.

“We’ve worked with the DNR for years on different projects within Aviation and outside of Aviation, and this is further expanding the cooperation between the two agencies,” said Lt. Patrick Lawrence, chief pilot for the Michigan State Police Aviation Unit.

The idea was initially presented to the State Police by former DNR Fire Section leader Jim Fisher and pilot Bill Green in 2016, both of whom have since retired.

The Michigan State Police acquired the helicopter from federal military surplus. Flying with the bucket requires a crew of three – a pilot, a radio communicator and a bucket operator.

Meanwhile, DNR fire staff worked to purchase the bucket, which costs about $25,000, with federal grant money.

The two agencies also had to craft a plan for how the partnership would work.

“This was a great opportunity to utilize existing aerial resources within the state for wildfire suppression. Michigan State Police and the Michigan Department of Natural Resources programs saw the mutual benefit of working together to protect natural resources, life and property during wildfire events. The addition of the Bambi Bucket adds to the long history of collaboration between the two agencies,” said Kevin Jacobs, DNR aviation manager.

For the past couple of years, on days with high fire danger, the helicopter flies from its base in Lansing to stand by in Roscommon. From there it can respond quickly to places in the northern Lower Peninsula.

The results are effective

“We want to support both agencies where it makes sense, and this is absolutely an arena where working together is good for the people of Michigan and good for both agencies,” Lawrence said.

He flew the first mission May 9 as air support to contain a fire south of Kirtland Community College’s Roscommon campus.

“It felt good to support the guys on the ground and help them get the fire under control,” Lawrence said.

Laux said a second mission, on a fire near Grayling May 14, was also effective.

“It was a huge save in keeping that fire under 20 acres,” he said.

So far in 2022, the DNR has worked to suppress 138 fires covering more than 2,900 acres across the state. Learn more about the department's wildland firefighting efforts at Michigan.gov/FireManagement.