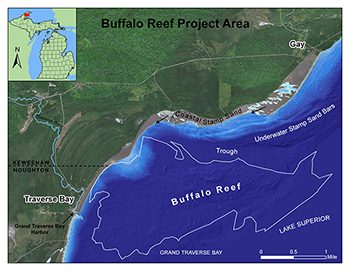 After more than three years of work to develop a plan to dispose of stamp sands mining waste threatening the lake trout spawning habitat of Buffalo Reef, a multiagency task force is set to provide details to the public.

A public meeting has been set for 6 p.m. Tuesday, July 12, at the Lake Linden-Hubbell High School auditorium, 601 Calumet St. in Lake Linden.

During the meeting, representatives from the Buffalo Reef Task Force will discuss the preferred plan, selected from an initial list crafted in 2019 of 13 potential strategies proposed for managing the stamp sands.

“Though our plan has been selected, we still need to identify a nonfederal sponsor and funding source(s) before we can move ahead with implementing our strategy,” said Jay Parent, district supervisor for the Michigan Department of Great Lakes, Environment, and Energy’s Upper Peninsula District Office in Marquette. “The scope of our plan may also change as the project matures.”

The Great Lakes Indian Fish and Wildlife Commission has determined that Buffalo Reef, which is situated off the Keweenaw Peninsula’s Grand Traverse Harbor, contributes approximately 30% of the lake trout harvested within 50 miles of the reef.

The three finalist action plans include:

Over a period of several months, a team of engineers and scientists worked to develop preliminary implementation cost estimates and to identify potential benefits and risks for each alternative.

The alternatives were narrowed down with the help of input from the public and experts from numerous fields. Next steps in the process include finding the required funding and sponsor, then designing and implementing the preferred plan.

In February 2019, the task force issued an alternatives analysis which briefly described 13 potential strategies for managing the stamp sands.

In May 2019, the task force released a responsiveness summary to public comments on the analysis of the alternatives.

A month later, the task force met to review the 13 alternatives and hone the finalists down to the three options, to then be fleshed out with specific costs and feasibility.

The project to save the 2,200-acre reef – which is being funded through the Great Lakes Restoration Initiative and a combination of state and tribal funds – is being executed in cooperation between the U.S. Army Corps of Engineers, the U.S. Environmental Protection Agency, the Keweenaw Bay Indian Community, the Great Lakes Indian Fish and Wildlife Commission, the Michigan Department of Natural Resources and the Michigan Department of Environment, Great Lakes, and Energy.

For more information on the ongoing Buffalo Reef effort or to sign up for email updates, visit Michigan.gov/BuffaloReef.