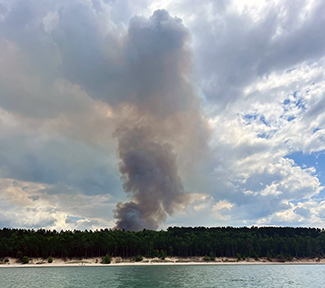 At 1:52 p.m., July 17, a large smoke plume was spotted approximately three-quarters of a mile south of the Twelvemile Beach Campground.

The Michigan Department of Natural Resources, Burt Township Fire Department and National Park Service crews responded to the scene and worked through the night to successfully contain the fire.

The fire burned to within about two-thirds of a mile south of Pictured Rocks National Lakeshore’s boundary before finally being contained. A cause has not yet been determined.

The DNR led the fire suppression efforts, assisted by federal crews from the National Park Service. Fire crews worked to contain the blaze to ensure the safety of campers and park visitors.

The fire continues to burn underground in the duff layer along the containment line in habitat that includes stands of hemlock. The DNR firefighters on the fire were drawn from numerous stations across the region, including personnel from Newberry, Seney, Shingleton, Gwinn, Ishpeming, Twin Lakes and Escanaba. The DNR crews manned equipment, including a tractor plow and nine engines.

"With a fire of this size it can take many days of continued effort to ensure the fire stays contained and is no longer is a threat,” said Chief Ranger Joe Hughes at Pictured Rocks National Lakeshore. “Thank you to the DNR firefighters who are continuing to work the area throughout this week."

National Park Service rangers will continue to provide assistance to DNR crews as needed over the coming days.

“Despite rainfall in some areas, fire danger remains at a heightened level in many parts of the Upper Peninsula,” said John Pepin, DNR deputy public information officer. “We remind everyone to be mindful and careful with any activities that might potentially spark a fire.”

For more information about fire regulation in the park, visit the link below:

Find out more about fire safety at the DNR webpage.

Plume: A plume of smoke from a 46-acre wildfire visible from Lake Superior is shown south of Twelvemile Beach at Pictured Rocks National Lakeshore.