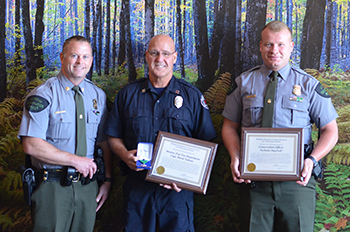 The fast-thinking actions of Michigan Department of Natural Resources conservation officer Nick Ingersoll and Monroe Charter Township Fire Department Capt. Dave Nadeau earlier this year are credited with saving the life of a 14-year-old boy who was stranded in cold water at the Dunbar Quarry.

The two men received Lifesaving Awards from the DNR Law Enforcement Division during Thursday’s meeting of the Michigan Natural Resources Commission, hosted at the DNR Outdoor Adventure Center in Detroit.

“On behalf of the department, I am proud to recognize CO Ingersoll and Capt. Nadeau for their quick assessment of the situation, which required them to risk their own safety to save another,” said Chief Dave Shaw, DNR Law Enforcement Division. “We are grateful for the teamwork with the Monroe Charter Township Fire Department, Michigan State Police and other responding agencies that turned this into a successful lifesaving effort.”

The rescue happened Thursday, May 19, after Ingersoll heard a dispatch call about a person who was yelling “Help!” at the Dunbar Quarry – the local name for a deep portion of Lake Monroe (a private lake), located near East Dunbar Road and Hull Road in Monroe County.

Within five minutes, Ingersoll met emergency responders from Monroe Charter Township Fire Department and Michigan State Police trooper Mitchell Lehman, who were already on scene. Capt. Nadeau attempted to toss a throw rope to the boy, who was clinging to a rock cliff and displaying early signs of hypothermia.

Ingersoll quickly determined it was time to physically enter the cold water, as the boy appeared to be losing strength. Nadeau later said he believed the boy was seconds from going under the surface of the cold water.

“Ingersoll did not hesitate. He put on his life jacket and jumped in to save the child,” Lehman said.

With his department-issued personal floatation device, Ingersoll jumped from the rock cliff, about 15 feet down into the water; Nadeau jumped seconds after Ingersoll safely emerged.

Nadeau and Ingersoll secured the boy in a life jacket and pulled him over to a rock to keep him above water. A Monroe City Fire Department rescue boat arrived and transported the boy to shore, where Monroe County Community Ambulance took him to the hospital for medical attention.

Ingersoll patrols Monroe County and has been a conservation officer since 2016. Nadeau has been with the Monroe Charter Township Fire Department since 1993.

Learn more about this unique area of law enforcement – including weekly excerpts from the current academy blog – at Michigan.gov/ConservationOfficers.