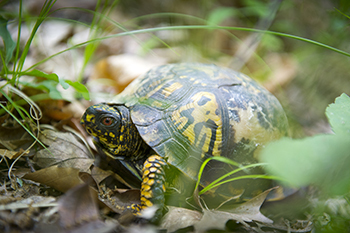 Interested in efforts to protect Michigan's rare animals and plants– including species like the eastern box turtle, long-eared owl, American bumblebee and floating marsh marigold? The Michigan Department of Natural Resources is looking for input on proposed changes to the state's endangered and threatened species list, which documents the imperiled wildlife species that are protected by law.

A public hearing to introduce the proposed changes to Michigan's endangered and threatened species list will be held from 9 to 11 a.m. Tuesday, Aug. 30, in the Forum of the Michigan Library and Historical Center, located at 702 W. Kalamazoo St. in downtown Lansing.

All who are interested are invited to attend and present their views. It is requested that all statements be submitted in writing for the hearing record.

Copies of the proposed changes to the list are available on the Michigan Office of Administrative Hearings and Rules’ Administrative Rules Division’s webpage in the Pending Rules Activity section, rule set number 2022-11 NR. In the Draft Rule Language document, bold text indicates proposed additions to the language of the endangered and threatened species rules, and strikethrough text indicates proposed deletions from the language of the rules.

Anyone needing accommodations for effective participation in the meeting should contact Victoria Lischalk at 517-599-1067 or LischalkV@Michigan.govto request mobility, visual, hearing or other assistance.

Written comments on the proposed changes may be submitted to DNR-EndangeredSpeciesList@Michigan.gov or by mail to: Department of Natural Resources, Wildlife Division, ATTN: Endangered Species Specialist, P.O. Box 30444, Lansing, MI 48909.

To be considered during the list revision process, written comments must be received by 5 p.m. Sept. 30.