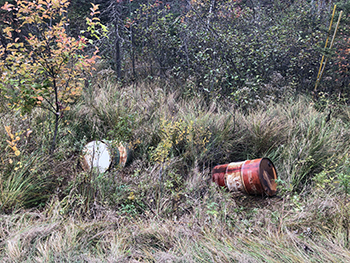 The Michigan Departments of Natural Resources and Environment, Great Lakes, and Energy were notified Wednesday about two 55-gallon drums that appeared to have been intentionally dumped in a ditch off Marquette County Road 565, in Richmond Township, near Palmer.

A small release of chemical substances from the barrels was stopped and an absorbent boom was placed around the site to help prevent further spread of the materials.

The water-filled ditch where the barrels were dumped flows into Warner Creek and the popular Warner Falls scenic vista nearby.

Contractors are being contacted to remove and dispose of the drums and the substances contained within. 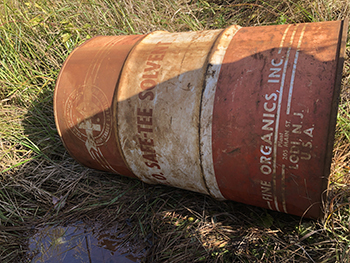 “Unfortunately, because of someone’s careless act, the cost to taxpayers will likely be in the thousands of dollars,” said Det. Josh Boudreaux of the Environmental Investigation Section of the DNR’s Law Enforcement Division. “While no immediate threats to health have been identified, we are advising the public not to disturb the drums or visit the area. There will be increased law enforcement presence in the area.”

One of the barrels is reddish-orange and the other is green. Both have a white stripe across the mid-section. The orange barrel's markings say it contained "Safe-Tee Solvent" and the other is marked to contain "Quaker State Motor Oil." 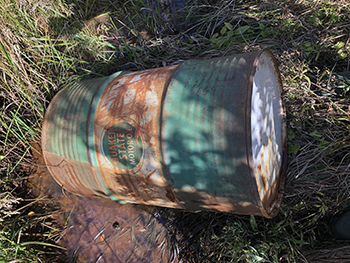 Any information that can be provided to assist in identification of the responsible persons or property the drums originated from can be directed to Det. Josh Boudreaux at 517-927-0860 or boudreauxj@michigan.gov.

Note to editors: Accompanying photos are available below for download and media use. Suggested captions follow. Credit: Michigan Department of Natural Resources, unless otherwise noted.

Barrel-1 and Barrel-2: One of two barrels dumped into a ditch in Marquette County’s Richmond Township, near Palmer. Investigators are seeking tips from the public to help determine the origin of the barrels and who might have dumped them there.

Barrels: Two barrels are shown dumped into a ditch off Marquette County Road 565 in Richmond Township near Palmer.