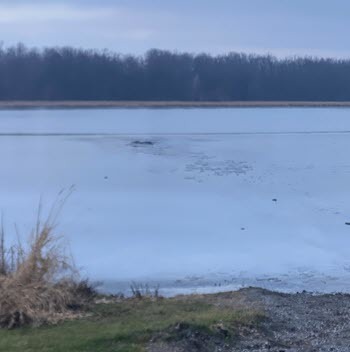 Leading into a long weekend for many Michiganders, the Michigan Department of Natural Resources reminds outdoor enthusiasts to use extreme caution when on or near the ice – including snowmobilers.

The DNR is emphasizing such caution after an ice rescue Sunday on Blanch Lake in Newaygo County. A 21-year-old Grant man and a DNR conservation officer received treatment for hypothermia, and both have since been released from the hospital.

“The department is beyond grateful that one of our conservation officers and a young man are both doing well after spending an extended amount of time in the cold water,” said Chief Dave Shaw, DNR Law Enforcement Division.

“As anxious as we all are to enjoy our favorite winter activities, the unseasonable winter has created unstable ice conditions throughout much of the state, particularly the Lower Peninsula,” Shaw said. “Everyone should use extreme caution when on or near the ice, consider wearing a personal floatation device and have ice picks easily accessible. There is no such thing as safe ice.”

Conservation Officers Jeff Ginn and Tim Barboza and probationary Conservation Officer Brandon Benedict responded to Blanch Lake, located east of M-37 and north of State Road after a caller contacted 911 around 3:20 p.m., stating a man walking on the ice had broken through into the water, where thedepth ranges from 15 to 20 feet.

Wearing a personal floatation device, Ginn crawled on the ice to the open water, about 50 to 75 yards from shore, where the man was clinging to the edge of the ice about an inch thick. The man displayed signs of hypothermia and was too weak to swim.

“When I was about 10 feet from the man, I threw him a personal floatation device and a rescue rope,” Ginn said. “He was unable to hold the PFD because he was holding onto the ice shelf.”

“He was unable to wrap the rope around himself because he did not want to let go of the ice,” Ginn said. “I threw him ice spikes, but he couldn’t reach them.”

Ginn was using an off-road vehicle ramp for weight distribution, and used the ramp to push the ice picks closer to the man.

“Water began to flood the surface of the ice, then broke underneath me, causing me to enter the water,” Ginn said. “Once in the water, I swam to and grabbed ahold of him. I grabbed the PFD I previously threw to him had him hold it to his chest, then grabbed the rope and ice spikes and swam us to the edge of the ice. I used the ice spikes to hold us against the ice shelf and attempted to tie the rope around his body under his arms.”

Barboza then crawled on the ice to tie a rope through Ginn’s PFD. Additional ropes were tied to the original line, which emergency responders used to try and pull the men from the water, but the ice continued to break.

Ginn was eventually pulled from the water but jumped back in to keep the man from sinking.

“I knew we were going to be in the water for a while, and kept talking to the man to keep him alert,” Ginn said. “I knew if I let go, he’d sink.”

Dressed in cold-water survival suits, emergency responders from the Newaygo Fire Department deployed an inflatable raft to successfully secure the 21-year-old and remove him from the water. Then Ginn climbed out of the lake onto the ice, and rescuers used the rope to pull him to shore.

The 21-year-old was in the water for more than 30 minutes and had a reported body temperature of 87 degrees Fahrenheit; he was transported to a hospital in Grand Rapids, treated for hypothermia and later released.

Ginn, in the water for about 20 minutes, was transported to Gerber Hospital in Fremont, where he was treated for hypothermia and released Sunday evening. Ginn had a reported body temperature of 89 degrees Fahrenheit.

“Going into a long weekend, this is when conservation officers usually see a lot of snowmobile and ice-related activity,” Shaw said. “We hope everyone keeps safety in mind by being cautious on the ice and operating snowmobiles sober and at a safe speed.”

The DNR is not releasing the name of the 21-year-old man.

Winter outdoor recreation activities require preparation and caution. If you witness someone break through the ice, immediately call 911. Before spending any time on or around ice, review ice safety tips at Michigan.gov/IceSafety.

Blanch Lake: A 21-year-old man from Grant spent more than 30 minutes in Blanch Lake Sunday after he fell through about an inch of ice while walking the lake. The Michigan Department of Natural Resources encourages everyone to use extreme caution when on or near the ice, particularly in the Lower Peninsula where temperatures have been unseasonably warm.

Ginn: Conservation Officer Jeff Ginn spent about 20 minutes in the water Sunday while helping to rescue a 21-year-old Grant man off Blanch Lake in Newaygo County. After initially being pulled from the water, Ginn jumped back into the lake to keep the man from sinking. Both Ginn and the man, who spent more than 30 minutes in the water, were treated for hypothermia and released from the hospital. Ginn patrols Newaygo County and has been a conservation officer since 2006.